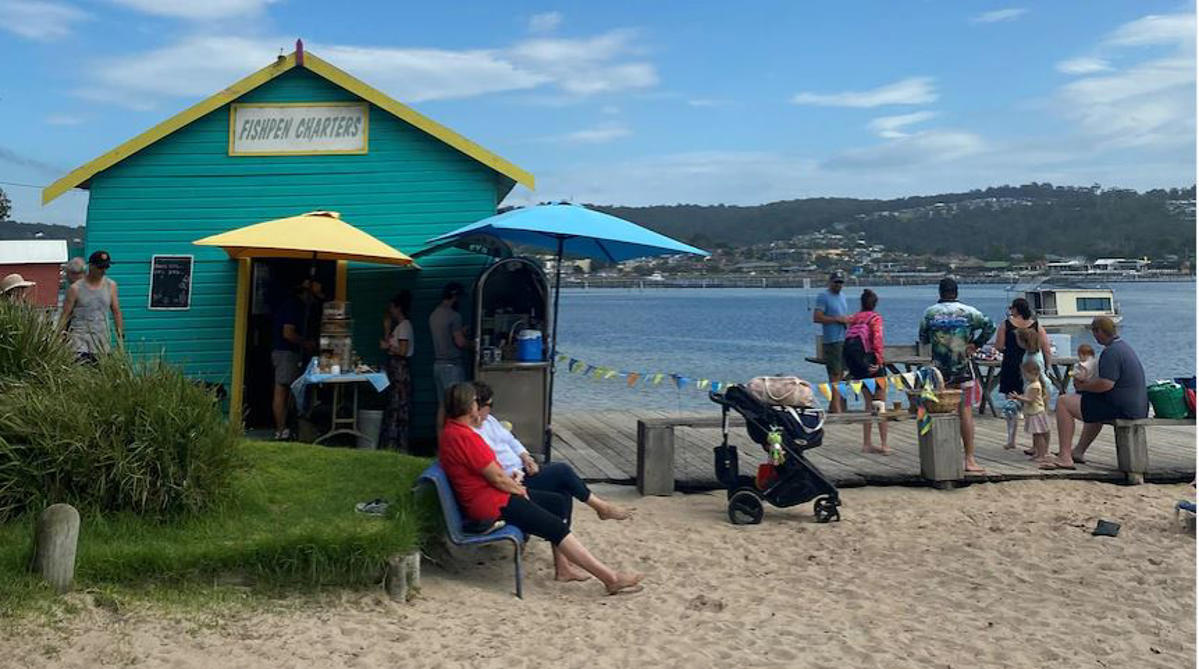 © ABC News Residents in the 12 local government areas out of lockdown are now able to enjoy more freedoms.

People in regional NSW have woken to a new patchwork of COVID-19 lockdowns after restrictions were changed in more than a dozen areas.

Yesterday, stay-at-home orders were imposed on the Albury and Lismore local government areas (LGAs) to prevent the spread of COVID-19 in the community after cases were detected.

Health officials are investigating two cases in Albury where the source of infection is unclear, but Deputy Chief Health Officer Marianne Gale said they could have “possible links” to Sydney.

The two cases are not thought to be related to each other.

In the Lismore area, a person was confirmed to have the virus yesterday. A health official for the Northern NSW Local Health District said the person had been infectious in the community since September 12, and had acquired COVID-19 on a recent trip to Sydney.

A school they visited on Monday was forced to close and is undergoing deep cleaning, while a number of other venues have been listed as exposure sites.

Deputy Premier John Barilaro said putting Lismore back into lockdown was “right and appropriate” given the extent of exposure was not yet known.

Dr Gale added that widespread vaccine hesitancy in the region had contributed to the re-introduction of stay-at-home orders.

“I’m sure if that was in another LGA, we would make a similar decision but, clearly knowing some of the vaccine hesitancy in that particular area itself, we would have a higher level of caution,” she said.

“We do understand there is a segment of the population who would have strong views about [vaccines].”

The two LGAs had only come out of lockdown last Saturday.

Officers from the Richmond Police District have started to investigate whether the public health orders where breached in Lismore.

The local area commander, Superintendent Scott Tanner, said he understood the community’s frustration, but it was essential to stop any potential transmission.

“We know it’s in our community, we have to reduce the liability because if we don’t, and it gets away from us, we are going to end up like the communities that we are seeing especially out west, where these lockdowns can go for months,” he said.

From 6:00pm AEST yesterday, Queensland reinstated border restrictions for those people in the Lismore LGA, which is about 100km from the border.

Just three days ago, communities were celebrating the reopening of the border bubble between NSW and Queensland, which allowed travel for essential work, school, essential shopping, medical reasons or caring for people.

Queensland’s Chief Health Officer, Jeannette Young, said it was “critically important” people who had been to Lismore in the past two weeks did not cross the border.

“Those currently in Queensland who have been in the Lismore area in the last 14 days should come forward, get tested and isolate until they receive a negative result,” she said.

The Cross-Border Commissioner for NSW, James McTavish acknowledged the heavy toll the health orders were having on these close-knit communities but warned going in and out of lockdown could continue for months.

“For people who are in these border communities, they’ve had a pretty tough 20 months or so,” he said.

“We’ve seen dozens of changes to rules on each border, we’ve seen substantial issues impacting people — economic, social, cultural issues that have been quite substantial.

“I note there is still, you know, the potential for outbreaks of COVID right across regional NSW. People need to continue to be vigilant.”

Lismore business owner Hope Shadbolt’s first week out of lockdown was “absolutely pumping”, and while it was a mind shift to have to go back into lockdown, she said supported the government.

“It’s a bit of a safety net, knowing that the government is on it straight away,” she said.

“We would want nothing worse than for Sydney to happen [here] because that’s only going to mean our business is closed for even longer.”

Meanwhile, 12 regional LGAs came out of lockdown at 1:00pm on Thursday.

People in Bega, Blayney, Bogan, Cabonne, Dungog, Forbes, Muswellbrook, Narrabri, Parkes, Singleton, Snowy Monaro and Upper Hunter can now do things like go to the gym, have up to five visitors in their homes and dance at weddings.

Commercial Hotel publican Mitch Creary, said his Bega venue was ready to go and while it was a great feeling to be finally opening up again, he would have liked a bit more time to prepare.

“I’m super excited but also super nervous because I’d thought we would have had a day or two to prepare, not be open straight away,” he said.

“We’ve been lucky that we have been doing take away so we have some stock already.”

Eden-Monaro federal MP Kristy McBain welcomed the new freedoms, but said the false positive cases confirmed by NSW Health on Wednesday had caused frustration because the region had to remain in lockdown a week longer than other regions.

“It’s been a hard few weeks for a lot of locals, especially on the back of what’s already been a pretty tumultuous 20 months,” she said.

“I think the frustration lies in community members not been properly informed about what was going on, but now that we are here I’m sure everyone will be happy to get out and about during the school holiday period and support their local businesses again.”

Last week, Mr Barilaro outlined exactly what would send regional areas in and out of lockdown — and it was as simple as having just one COVID-19 case.

“If a case arises, we will apply the same logic that we apply from day one, which was the Orange case,” he said.

“Where we put that community into lockdown, and we would lockdown automatically an area for at least a 14-day period, the incubation period.”

However, the ones announced for Lismore and Albury are only one week — a timeframe described by Health Minister Brad Hazzard as “appropriate” to “try and get a handle on what exactly is going on in the local areas”.

“In the normal course, more often than not, [NSW] Health determines it will be 14 days,” Mr Barilaro said.

“But, in this case, looking at the issues, [NSW] Health has determined that seven days will be appropriate, but I’m just warning the community that it may be longer.”

MENOPAUSAL women are dogged by weight gain, anxiety, hot flushes and brain fog – but they can make it The Change for the better with exercise. Our Menopause Matters campaign ... Read more »

Leaders at the University of Southern California still have not embraced transparency about abuse allegations and the university’s responses. (Patrick T. Fallon / For The Times) More than three years ... Read more »

Medical workers carry a patient suspected of having coronavirus on a stretcher at a hospital in Kommunarka, outside Moscow, Russia, Saturday, Oct. 16, 2021. Russia’s daily death toll from COVID-19 ... Read more »

The Prince of Wales has told how his grandson Prince George is learning about climate change as he introduced a documentary ahead of Cop26. Heir to the throne Charles said ... Read more »

Billy Porter criticized Vogue for featuring Harry Styles as its first ever male in a dress on its cover: 'He doesn't care'

Chin Tong: Pakatan at odds about which logo to use at Melaka polls, risks alienating voters

DOMINIC Raab today revealed police had to step in to stop an acid attack against him and that he's faced three death threats in the last two years. The deputy ... Read more »

EU, UK must be given time to discuss N. Ireland- Ireland's Coveney

LONDON (Reuters) – As public pressure has grown for action to limit climate change, countries and companies worldwide have made promises to contribute to the effort, which will be reviewed ... Read more »

There has been a “surge” in the number of babies being given the same names as two characters from the hit Netflix series Sex Education, according to the Office for ... Read more »

© Provided by CapeTalk Khayelitsha activist Nkosikhona Swartbooi says most ward councillors in the area are not driven by the mission to serve the community’s needs There have been several ... Read more »

Photo credit: RoyalFamily – Instagram It's not everyday Prince William does an Instagram Q&A session, but this weekend he treated royal fans to just that. Speaking on his Story on ... Read more »

'Keep calm': A Georgia town calls for unity as it prepares for Black jogger murder trial

The Boykin Ridge neighborhood, where Ahmaud Arbery was staying with his mother the day he went for a jog and was slain about 2 miles away in the Satilla Shores ... Read more »

A man in his 20s has been sentenced in North Troms and Senja District Court to four years in prison for raping a woman who was sleeping. The unanimous verdict ... Read more »

Arjun Kapoor hints at going on a digital detox, says 'time to disappear'

© Provided by Zee News New Delhi: Actor Arjun Kapoor has decided to opt for a digital detox for some time. On Monday, Arjun took to Instagram Story and posted ... Read more »

‘This is our last chance': Biden urged to act as climate agenda hangs by a thread

Photograph: Drew Angerer/Getty Images With furious environmental activists at the gates of the White House, and congressional Democrats fretting that a priceless opportunity to tackle catastrophic global heating may be ... Read more »

Here are the top 100 most popular names for baby boys in England and Wales in 2020, according to the Office for National Statistics. The number next to each name ... Read more »

'It's colours, guys! Nice colours': Mbalula claps back at claims he used Zozi's snap for electioneering

© Provided by SowetanLive Mbalula shared Tunzi’s Miss Universe entry photo where she can be seen wearing an emerald green headscarf and dress. The original was uploaded on Miss Universe’s ... Read more »

Warriors superstar fullback Reece Walsh has pleaded guilty in a Gold Coast court to possessing cocaine. The 19-year-old father was arrested in the Surfers Paradise nightclub precinct in the early ... Read more »

Hospitals under strain again after coronavirus patients moved from Zwolle

A coronavirus poster in hospital. Photo: DutchNews.nl Three coronavirus patients were transferred from a hospital in Zwolle to Rotterdam at the weekend amid warnings that the health service will struggle ... Read more »

SNP MP Joanna Cherry has revealed that she considered quitting Parliament because of the “unrelenting attacks” made against her. The high-profile politician, speaking in the wake of the death of ... Read more »

HSE chief Paul Reid has said it is “time to hit the reset button” as the number patients being treated in hospital continues to rise. He said today there were ... Read more »

© Thanassis Stavrakis A police officer tries to stop protesters displaying a Tibetan flag and a banner reading “No genocide games” during the lighting of the Olympic flame at Ancient ... Read more »

Your weekly horoscope revealed for 18 to 24 October

© Provided by Hello! debbie-frank-horoscope Astrologer to the stars Debbie Frank has shared her weekly horoscopes with HELLO! Online readers. Find out what the stars have in store for you ... Read more »

© Provided by ABC NEWS Daniel Knuth outside the Townsville courthouse in 2019. (ABC North Qld: Sally Rafferty) The son of a Queensland politician has been denied bail after being ... Read more »

Alex Premat drops out of the Bathurst 1000

© Provided by ABC NEWS A return of even a mild La Niña could pose a flood risk to already wet catchments this summer. (Supplied: Jordan Cantelo) Farmers in WA’s Mid ... Read more »

EU says it has exported over 1 billion COVID-19 vaccines

Man United are all icing under ‘just do something' Solskjaer

Facebook to hire 10,000 workers in EU to build ‘the metaverse'

EU, UK must be given time to discuss Northern Ireland- Ireland's Coveney

Invite: The climate crisis and COP26 - Sign up for our Open Newsroom