Queen Elizabeth has called on business leaders and governments to work together “to avert the challenges of climate change”.

Her Majesty said those in power had a “shared responsibility to rise to this challenge”.

The comments are the monarch’s first major intervention on the climate crisis as she joins her son Prince Charles and grandson Prince William in calling for a “sustainable future”. 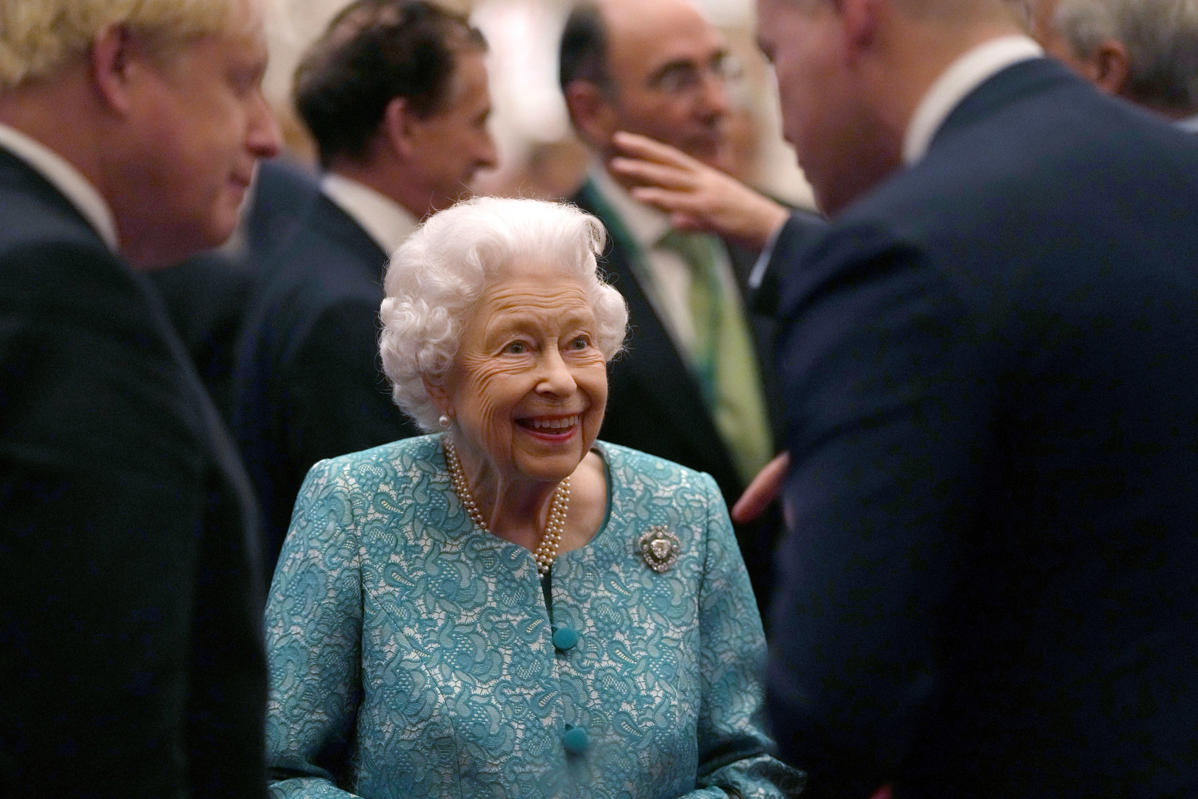 © Getty Queen Elizabeth said governments must work together to

The Queen hosted a reception at Windsor Castle for the Global Investment Summit, which is being put on by the UK Government, meeting with international business and investment leaders.

The Queen was joined by the Prince of Wales, the Duke of Cambridge, Duke and Duchess of Gloucester and Prince Michael of Kent.

For the reception inside St George’s Hall, the Queen wore the Cullinan V brooch, previously owned by her grandmother Queen Mary.

The event comes ahead of the United Nations Climate Change conference (COP26) in Glasgow, an historic summit that will bring world leaders and public figures from around the world to commit to ambitious, but achievable, climate targets.

In a written foreword for the brochure of the Global Investment Summit, released ahead of the reception at Windsor Castle, the Queen shared her views about the threat facing the environment.

Referencing the “common goal of tackling the COVID-19 pandemic” the Queen said the global community had “achieved scientific breakthroughs faster than was ever expected”.

© Getty The Queen welcomes Bill Gates at a reception inside Windsor Castle on October 19.

“It has been a reminder that the diversity of thinking and experiences that this collaboration brings is not only of social benefit, but imperative for innovation and transformation,” Her Majesty said.

The Queen said it was “working together against seemingly insurmountable obstacles” that brought about “technologies that change the world”.

She pointed to “breaking the Enigma code” by the team at Bletchley Park during World War II as an example.

But, the Queen said, “the challenge of today is not in breaking a code. It is in working together across the globe to avert the challenges of climate change”.

“It is our shared responsibility, of those in government, business, and civil society, to rise to this challenge.

“I am proud of how the United Kingdom is seeking to secure a sustainable future, yet there is still much more to do.

“This summit is not just a showcase, but an opportunity to come together and, in the generous spirit of collaboration, forge new partnerships.”

Last week, Her Majesty was overheard in conversation speaking about COP26 saying it was “irritating” when people “talk but don’t do”.

It is widely believed the Queen was referring to world leaders who hadn’t yet committed to attending the conference.

Australian Prime Minister Scott Morrison later confirmed his attendance after it was assumed the Queen had been speaking about him.

These songs were a worldwide success by TikTok

Joe Biden Helps Kennedy Center Honors Return To Tradition During A Weekend Of Politicos, Performers And Proof Of Vaccination

Adrienne Shelly's husband on revisiting her life and facing her killer in new documentary: 'I will never have closure'

Four movie stars become directors of their own story

Prince William said that he listens to the band’s driving 1990 anthem “Thunderstruck” to ease himself into the working week. (Image credit: AFP) Britain’s Prince William has revealed himself as ... Read more »

According to a source, the entire row behind John, Chrissy and their children was empty and the family only came in just before the start to take their seats. With ... Read more »

Movie-based games allow you to relive some of your best moments from the movies. You are no longer restricted to watching, but assume the plot and play out critical roles ... Read more »

Thomas Massie‘s photo was posted on Twitter a few days after a Michigan school shooting left four students dead A US congressman has faced a barrage of criticism after he ... Read more »

A sign apologising to customers for a lack of stock is pictured above an empty Tesco shelf Tesco shoppers face the prospect of empty supermarket shelves over Christmas, as warehouse ... Read more »

Ayoub, the only Moroccan farmer in the Netherlands, can be seen in his own program at KRO-NCRV from Tuesday 21 December. In the six-part series, 23-year-old Ayoub shares his passion ... Read more »

'I jilted a Royal artist.. so he called me Ageing Dancer in my portrait'

Caroline Brown with Aging Dancer by Norman Hutchinson – BNPS He was the artist who started life in an Indian orphanage but went on to paint the Queen, the Duke ... Read more »

Jennifer Lawrence was glowing at the premiere for her upcoming Netflix movie Don’t Look Up, as she walked down the red carpet with her growing baby bump. The Oscar winner ... Read more »

Pair repeatedly clashed as Mercedes man won Saudi Arabian GP Hamilton says of Red Bull driver: ‘He’s over the limit, for sure’ Lewis Hamilton hit out at his Formula One ... Read more »

Dan Walker on Strictly: My time had come to an end… no way I could compete

BBC Breakfast host Dan Walker has said his time on Strictly Come Dancing gave him a new appreciation for the skill of professional dancers. Presenting the morning news show for ... Read more »

Among others, the fiancée of journalist Jamal Khashoggi, who was murdered by a Saudi assassination squad, wrote an open letter to Bieber explaining why it would send the wrong signal ... Read more »

Kim Kardashian West has paid tribute to her “bestie”, son Saint West, on his sixth birthday. The ‘Keeping Up with the Kardashians’ star paid a touching tribute to her little ... Read more »

Baldwin’s account @AlecBaldwin appears to have disappeared and that was the page where he provided updates regarding the accident. His other Twitter page is still active, but the last post ... Read more »

Duran Duran have announced more dates for their 40th anniversary celebration tour. The run, which features shows across the UK and Europe, will kick off with a three-night immersive experience ... Read more »

Freida Pinto: Growing up in India made me want to star in a Christmas movie

Freida Pinto has said it was her childhood growing up in India that made her always want to take part in a Christmas movie. The Slumdog Millionaire actress said celebrating ... Read more »

Tonight on TV: Princess Amalia – Teen on the way to the throne, URK! and Dream house wanted

Because there is a lot to see on television every day, you can read the viewing tips for tonight here every morning. These are the recommendations for Monday 6 December. ... Read more »

The self-taught assouf star broke out of the underground with a stunningly adventurous album that fused psychedelia, introspection and rock-star flair In Mdou Moctar’s world, riff and rhythm count but ... Read more »

Ten new up-and-coming artists have been announced as part of the longlist for BBC Radio 1’s Sound of 2022. The 20th year of the list sees eight female nominees tipped ... Read more »

Tom Holland reveals he will star in Fred Astaire biopic

Tom Holland has revealed he will play Fred Astaire in an upcoming biopic about the American actor and dancer. The Spider-Man star said he was yet to read the script ... Read more »

Bruce Boudreau is reportedly set to become the next head coach of the Vancouver Canucks after the team’s brutal start to the season. (Getty) Veteran NHL bench boss Bruce Boudreau ... Read more »

(Getty Images) Prince William has revealed that there is “nothing better” than turning up the volume to AC/DC’s ‘Thunderstruck’ to get him pumped up for the working week. The Duke ... Read more »

Veteran broadcaster Jon Snow says he ignored instructions not to wear bright colours when he first started at Channel 4 and wanted to make “a bit of a splash” while ... Read more »

steve ford wedding Sarah Barlow Restored by the Fords' Steve Ford is a married man! The renovation pro married his girlfriend of three years, Andrea Cargill, on Sunday in a ... Read more »

Hollyoaks star Jorgie Porter has revealed she is engaged to partner Oliver Piotrowski. The actress, known for her role as Theresa McQueen in the Channel 4 soap, shared the news ... Read more »

Rosalía, Lizzo, Cardi B wrap up Miami's over the top Art Basel week with surprise performances

The Associated PressTom Holland poses for photographers at the photo call for the film ‘Spider-Man: No Way Home’ in London Sunday, Dec. 5, 2021. (Photo by Joel C Ryan/Invision/AP) LONDON ... Read more »

Covid not over and next pandemic could be more lethal, says Oxford jab creator

Photograph: Steve Parsons/PA Prof Dame Sarah Gilbert says this will not be the last time a virus threatens our lives and our livelihoods The coronavirus pandemic that has so far ... Read more »

The Justice Department could make public a summary of the findings of Robert Mueller’s investigation into former President Donald Trump and his alleged ties to Russia that contains information left ... Read more »

Spoiler alert! The following post contains details about the ending of “Encanto.” Watching “Encanto” was like going back in time. More than tugging at one’s inner child, the Disney animated ... Read more »

Henry van Loon about fatherhood: ‘For the first time in my life it is no longer about me'

‘I could have done with eight more hours': readers on the Beatles documentary epic Get Back

'Landscapers': Olivia Colman on collaborating with husband Ed Sinclair: 'It's easier not to talk about the work'

What can we do to have more followers on our Instagram?

A Michigan teacher was suspended over claims of 'insensitive' comments. A parent said he told students how he would've carried out the Oxford school shooting differently.