Jennifer Lawrence is opening up about her return to the red carpet, describing it as an “out of body” experience. 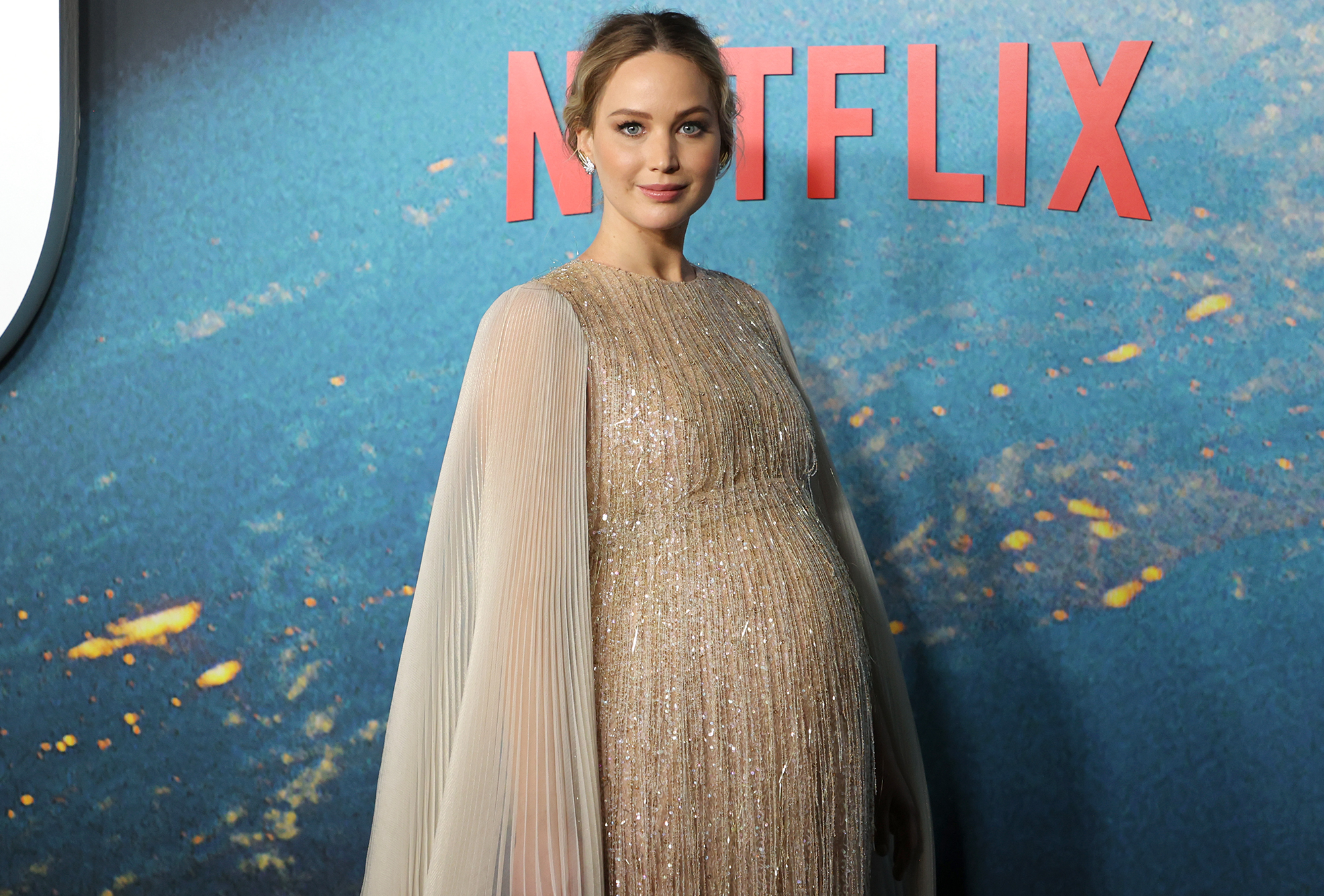 The 31-year-old actress, who is currently expecting her first baby with husband Cooke Maroney, attended the New York City premiere of her latest film, Don’t Look Up, on Sunday.

Speaking with E!, Lawrence said that she felt “out of body,” adding, “I’m, like, not here — if that makes sense. I’m not processing [it].”

The soon-to-be mom, who also posed with her costar Leonardo DiCaprio on the carpet, dressed in a sparkly Dior gown with semi-sheer cape sleeves. She completed her look with Tiffany & Co. jewelry and wore her hair pulled back.

DiCaprio and Lawrence star in the dark comedy, directed by Adam McKay, as two astronomers who set out on a media tour to warn the public that a meteor will destroy Earth in just six months.

Don’t Look Up premieres in select theaters on Dec. 10 and arrives on Netflix on Dec. 24.

Never miss a story — sign up for PEOPLE‘s free weekly newsletter to get the biggest news of the week delivered to your inbox every Friday.

PEOPLE confirmed in September that Lawrence and Maroney, who were first linked in June 2018, were expecting their first baby together. The couple became engaged in February 2019 and tied the knot on Oct. 19, 2019.

Lawrence recently said in Vanity Fair‘s December issue that she hopes to “protect” her child’s “privacy” as much as possible.

“If I was at a dinner party, and somebody was like, ‘Oh, my God, you’re expecting a baby,’ I wouldn’t be like, ‘God, I can’t talk about that. Get away from me, you psycho!’ But every instinct in my body wants to protect their privacy for the rest of their lives, as much as I can,” she said.

RELATED: Sen. Tammy Duckworth Recalls Thinking She Had ‘No Right Having a Baby at 49 Years Old’ While Pregnant

“I don’t want anyone to feel welcome into their existence,” Lawrence added. “And I feel like that just starts with not including them in this part of my work.”

She also addressed her hiatus from the spotlight and told Vanity Fair reporter Karen Valby at the top of the interview that she was “so nervous” to talk about what she’s been up to, pointing out that she hasn’t “spoken to the world in forever.”

Read the original article on People

Cathedral visitors to get 3D experience of Christian nativity masterpiece

FORTNITE sweats are always looking for ways to build fast and controller players are getting a helping hand from one expert player. Over on Tik Tok, content creator jkiqr claims ... Read more »

Emmerdale’s Mackenzie Boyd is in for a whirlwind of drama in coming weeks, as soap spoilers reveal he shares a drunken kiss with Dawn. ITV spoilers revealed that an upcoming ... Read more »

The president of Dubai-based Emirates Airline slammed the US’s handling of a 5G network rollout that sparked flight safety fears on Wednesday, referring to the situation as “utterly irresponsible.” Emirates ... Read more »

The best deals on Amazon are typically available to anyone who wants to get in on the action. Just visit Amazon’s main deals page and you’ll find thousands of great ... Read more »

The Associated PressFILE- Volunteer dressed in a costume talks to a young boy who is about to receive the COVID-19 vaccine at vaccination center in Prague, Czech Republic, Saturday, Jan. ... Read more »

Ed Woodward will wave goodbye to Manchester United at the end of this month having pocketed a remarkable final salary from the club. Woodward is due to step down as ... Read more »

Jeffery Simmons: Best thing about Titans right now is we’re getting everyone back

One of the big storylines for the Titans this week is the possible return of running back Derrick Henry to the lineup after he missed the last nine games of ... Read more »

© The Manila Times A graduating student searches for job opportunities at a job matching fair at Tsinghua University in Beijing, China, March 16, 2021. XINHUA PHOTO BEIJING: In an ... Read more »

Boss behind mass Zoom firing back in charge

© YouTube On the call Mr Garg told 900 staff: “Your employment here is terminated. Effective immediately.” The US boss who sparked outrage after sacking 900 staff in an online ... Read more »

With Activision, Microsoft is one gigantic step closer to game subscription dominance

© Photo by Vjeran Pavic / The Verge This weekend, I noticed that my PS5 and Switch were literally collecting dust — and realized that’s because I’ve been playing my ... Read more »

Ant Anstead not thinking of marriage to Renee Zellweger

© Bettmann -Contributor/ Chip Somodevilla/Getty Images President Joe Biden has been criticized by Republican’s for comparing them to George Wallace despite the president praising him the segregationist in the past. ... Read more »

© Provided by Football League World tim ream00s0s0s0s Fulham have been in exceptional form this season and currently sit five points clear at the top of the Championship. Their goal ... Read more »

Kate Middleton’s diet is a crucial part of her famously healthy lifestyle, giving her the must-needed energy to keep up with her vigorous daily workouts.  © Provided by Woman&Home How ... Read more »

New rules on Covid-19 postponements in the Premier League could be in place for the first round of games in February. Clubs are expected to meet next week, when the ... Read more »

A two-year-old boy allegedly battered to death by his mother and her boyfriend was told “you have to ruin the fun” by one of his killers during an assault in ... Read more »

How to cope with the heartache of an empty nest

When my daughter Hadley was 3-years-old she fell in love with a kitten. We had gone to the pet shop to buy fish food, and a kindly, cunning employee handed ... Read more »

© Provided by NBC News This profile is part of NBC News’ series about former Vine stars, tied to the fifth anniversary of the platform’s death. Anybody who was on the ... Read more »

Canadian Pacific Railway (CP.TO)(CP) has increased its order of fuel cells to “significantly expand” its hydrogen locomotive program, according to Ballard Power (BLDP.TO)(BLDP), the railway’s partner on the zero-emissions project. ... Read more »

West Ham United insider ExWHUemployee has revealed the club are looking at Fabio Carvalho for a possible move in the summer.  With the winter transfer market now open, most fans ... Read more »

What is Africa's Great Green Wall and how could it affect the climate?

Many parts of northern Africa, such as the Sahel and Sahara regions, are arid with vast deserts that experience wild swings in temperatures and precipitation patterns. However, this area was ... Read more »

Tributes have poured in for French actor Gaspard Ulliel, who has died aged 37 following a skiing accident in the Alps. Ulliel was involved in an incident yesterday (18 January) ... Read more »

FOR entrepreneurs, appearing on TV’s Dragons’ Den can either make or break their business. So what does it take to really wow the judges Deborah Meaden, Peter Jones, Sara Davies, ... Read more »

Ben John Neo Nazi – Leicester Mercury/BPM Media A Nazi sympathiser told to read classic literature as he avoided prison for a terror offence will now be jailed, after the ... Read more »

5G airport issues: Which have been affected?

The impending rollout of 5G wireless technology has played havoc with air travel, with a number of major carriers announcing suspensions and disruptions. © Copyright 2019 The Associated Press. All ... Read more »

The Sandbox guide: How to make money in the play-to-earn crypto game

THE Sandbox is 3D virtual open-world game where players can build, own, and make money from their gaming experiences. This is one of the top games of the Metaverse, using ... Read more »

Here she goes again. Vice President Kamala Harris will travel to Honduras next week as part of a fresh effort to address what the Biden administration calls the “root causes” ... Read more »

Liverpool fans have had their say on a potential reunion of Steven Gerrard and Luis Suarez at Aston Villa. Suarez has been tipped to move to Villa with his Atletico ... Read more »

Arsenal host Liverpool in the deciding second leg of their Carabao Cup semi-final on Thursday night. The match is expected to go ahead at this stage, with the Gunners still ... Read more »

Transfer insider Dean Jones believes that West Ham United are attracted by the idea of signing Kortney Hause from Aston Villa this month. The club have yet to strengthen their ... Read more »

© Handout A transmission electron color-enhanced micrograph of SARS-CoV-2 virus particles, isolated from a patient The United States appears to be emerging from its latest coronavirus wave driven by the ... Read more »

'What a day!' Speaker Lindsay Hoyle reacts after febrile PMQs

Tomiyasu absent, Odegaard returns as wonderkids called up to Arsenal training ahead of Liverpool

Voices: Boris Johnson is resorting to the kitchen sink strategy – but he can't win now

'We need to stand up and be counted': TDs agree on all-party approach to violence against women

UK inflation rate chart: How your pay is worth less now