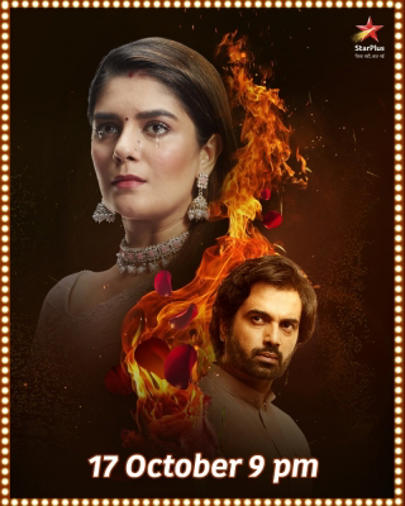 Mumbai, Oct 16 (IANS) Actress Pooja Gor has talked about the movie ‘Pratigya Ki Ankahee Dastaan’, which is based on the show ‘Mann Kee Awaaz Pratigya 2’ that premiered on March 15 featuring Pooja and Arhaan Behll. But the movie will showcase a new story.

Pooja says: “This Sunday, ‘Pratigya Ki Ankahee Dastaan’ will retain the essence of the original, but with a fresh storyline that is more relevant in today’s time. The character of ‘Pratigya’ is so well-blended in my blood that it just flows. I can wake up and before I open my eyes, I can be in the character if you say ‘action’.”

The story of ‘Pratigya’ and ‘Krishna’ has been shown to the viewers with its drama-packed episodes in Seasons 1 and 2 in the show ‘Mann Kee Awaaz Pratigya’. The one-time watch movie ‘Pratigya Ki Ankahee Dastaan’ is produced by Rajan Shahi. It stars Pooja Gor and Arhaan Behl in the respective roles of Pratigya and Krishna.

Talking about her character, Pooja says, “It is a character that is closest to my heart. It will always remain special, and I will always remain ‘Pratigya’. This character has given me everything from name to fame. It gave me lessons as an actor, it gave me growth. I urge all the fans of Pratigya to watch us one more time on October 17.”

‘Pratigya Ki Ankahee Dastaan’ will air on October 17 at 9 pm on Star Plus.

Jo Konta 'grateful for wonderful career' after retiring from tennis

Bear-y Close Call: Bear Jumps on Door of British Columbia Home at 2 AM

Ben Affleck: I want to be a good husband

NxtWave raises $2.8m in pre-Series A

Bill C-4, a ban on conversion therapy, passes in the House with unanimous consent

Conservative MP Rob Moore rose on Wednesday in the House of Commons to ask for unanimous consent to pass Bill C-4, a ban on conversion therapy. The legislation would make ... Read more »

A woman shared the relationship boundaries she and her husband observe, and the reaction on social media quickly got heated. TikTok user @bmcpher, whose name is Bailey, shared a post ... Read more »

'It's another joke you tried to make that's not that funny:' Rory McIlroy is tired of the ripped-shirt jokes as he prepares for the Hero World Challenge

© Provided by Golfweek Given that Rory McIlroy was making his first trip to the media center since ripping his golf shirt in disgust after squandering the 54-hole lead of ... Read more »

© Provided by CBS Sports The Philadelphia Phillies have signed right-handed reliever Corey Knebel to a one-year contact, the team announced on Wednesday. Knebel will receive $10 million, according to ... Read more »

CHICAGO — Man testifies that ex-“Empire” actor Jussie Smollett recruited him and his brother to fake an assault on him in Chicago. Read more »

Is KL Rahul a part of Suniel Shetty's family, poses with Athiya & Ahan at Tadap screening

© Provided by Pinkvilla Tadap Screening happened on Tuesday night and it was a mini Bollywood get-together in its own right. Numerous stars like Kajol, Salman Khan, Shanaya Kapoor, Arjun ... Read more »

Miley Cyrus REACTS to making Forbes' 30 under 30 list: It was now or never

© Provided by Pinkvilla   Miley Cyrus has been included to Forbes’ annual 30 Under 30 List, and the singer expressed her thanks on Twitter shortly after the news on ... Read more »

Ahead of wedding, Vicky Kaushal chills with old buddies, celebrates 16 years of friendship

Although Katrina Kaif and Vicky Kaushal have remained tight-lipped about their nuptials, Pinkvilla has exclusively learnt that the duo might tie the knot on December 9. Now, just days ahead ... Read more »

© Provided by The Spun The TNT crew featuring Charles Barkley, Ernie Johnson, Shaquille O’Neal, and Kenny Smith at an event. On Tuesday night, the Phoenix Suns took down the ... Read more »

© Provided by The Spun LeBron James on the court for the Lakers. Earlier this week, the Los Angeles Lakers learned they would be without LeBron James for Tuesday night’s ... Read more »

© Provided by Fansided The Miami Heat have been dealt some bad news, as star player Bam Adebayo has a torn UCL and he’ll need thumb surgery.  Things have been ... Read more »

© Provided by Fansided The Los Angeles Dodgers backed up a truck full of money to re-sign superutility man Chris Taylor. They didn’t have much of a choice. Taylor balled ... Read more »

Former Braves reliever Mark Melancon has new home, and it's not the ATL

Damian Lillard out at least 10 days

© Provided by HoopsHype Chris Haynes: Portland guard Damian Lillard will be sidelined for at least 10 days with an MRI reveal of a lower abdominal tendinopathy. Source: Twitter @ChrisBHaynes ... Read more »

© Provided by The Spun LeBron James on the court for the Lakers. On Tuesday night, Lakers star LeBron James entered the league’s health and safety protocols. As a result, ... Read more »

The heavily Christian Duggar family was discredited in 2015 when In Touch Weekly revealed that eldest son Josh had confessed ten years earlier that he had sexually assaulted five girls, ... Read more »

Dame Arlene Phillips has said she dreaded taking her four-year-old daughter to school because she was often confused with being her grandmother. The I’m A Celebrity… Get Me Out Of ... Read more »

As Punjab-Delhi politicos spar over infra, govt smart school in Ludhiana gets approval for pool

© Provided by Hindustan Times The smart school in question is being built on three-acre Greater Ludhiana Area Development Authority (GLADA) land and the project in its entirety will approximately ... Read more »

Ludhiana | Home guard killed in accidental firing from own firearm

© Provided by Hindustan Times The home guard accidentally shot himself in the stomach while cleaning his weapon. (Representative Image/HT File) Ludhiana: A 50-year-old home guard was killed after he ... Read more »

© Provided by The Times of India GUWAHATI: The prime accused in the lynching of an All Assam Students’ Union (Aasu) leader in Jorhat two days ago was “accidentally” killed ... Read more »

© Provided by Hindustan Times In its order dated November 22, the court has issued a notice of motion to GLADA officials for January 31; affordable urban housing is being ... Read more »

Alec Baldwin sobs in first interview since film set shooting - as mystery deepens after he says: 'I did not pull trigger'

Baldwin says he has "no idea" how a live bullet got into the gun that killed Halyna Hutchins - insisting "it was a bullet that was not even supposed to be on the property". Read more »

© Provided by WION Five-time Indian Premier League (IPL) champions Mumbai Indians (MI) built a strong team over the years and emerged as one of the top contenders in previous ... Read more »

© Provided by Titans Wire After being waived by the Tennessee Titans last week, future Hall of Famer and running back, Adrian Peterson, is getting a look from the Seattle ... Read more »

© AP Mixon’s getting deadlier as the season goes. He just popped off for 123 yards and two scores in Las Vegas. Back in the win over the Steelers, 90 ... Read more »

© Provided by The Spun Detail of the College Football Playoff National Championship trophy, along with the helmets of the 2 competing teams, Alabama and Georgia. The official announcement of ... Read more »

© Provided by The Spun Mac Jones standing over his offensive line before snapping the ball. New England Patriots quarterback Mac Jones is looking to capitalize on his early NFL ... Read more »

How to complete Moments Duo SBC in FIFA 22 Ultimate Team

Rich Eisen Has A Blunt Message For Patriots' Doubters

© Provided by The Spun Patriots head coach Bill Belichick on the field in Foxboro. Rich Eisen has a message for all the Patriots doubters out there. Since starting their ... Read more »

Michael B Jordan says 'the timing was right' with Lori Harvey

A disgraced Trump loyalist is in trouble for blowing off January 6 investigators. But Biden's DOJ still faces a tough call on prosecuting him.

Queen Elizabeth and Canada: Canadians won't be as interested in monarchy if Prince Charles takes over, study reveals

Spotlight on west UP as SP, RLD to hold joint rally in Meerut on Dec 7

Among the amateurs at LPGA Q-Series: 7 college players, a junior and a talented sister act

Review: A Neapolitan rhapsody in 'The Hand of God'