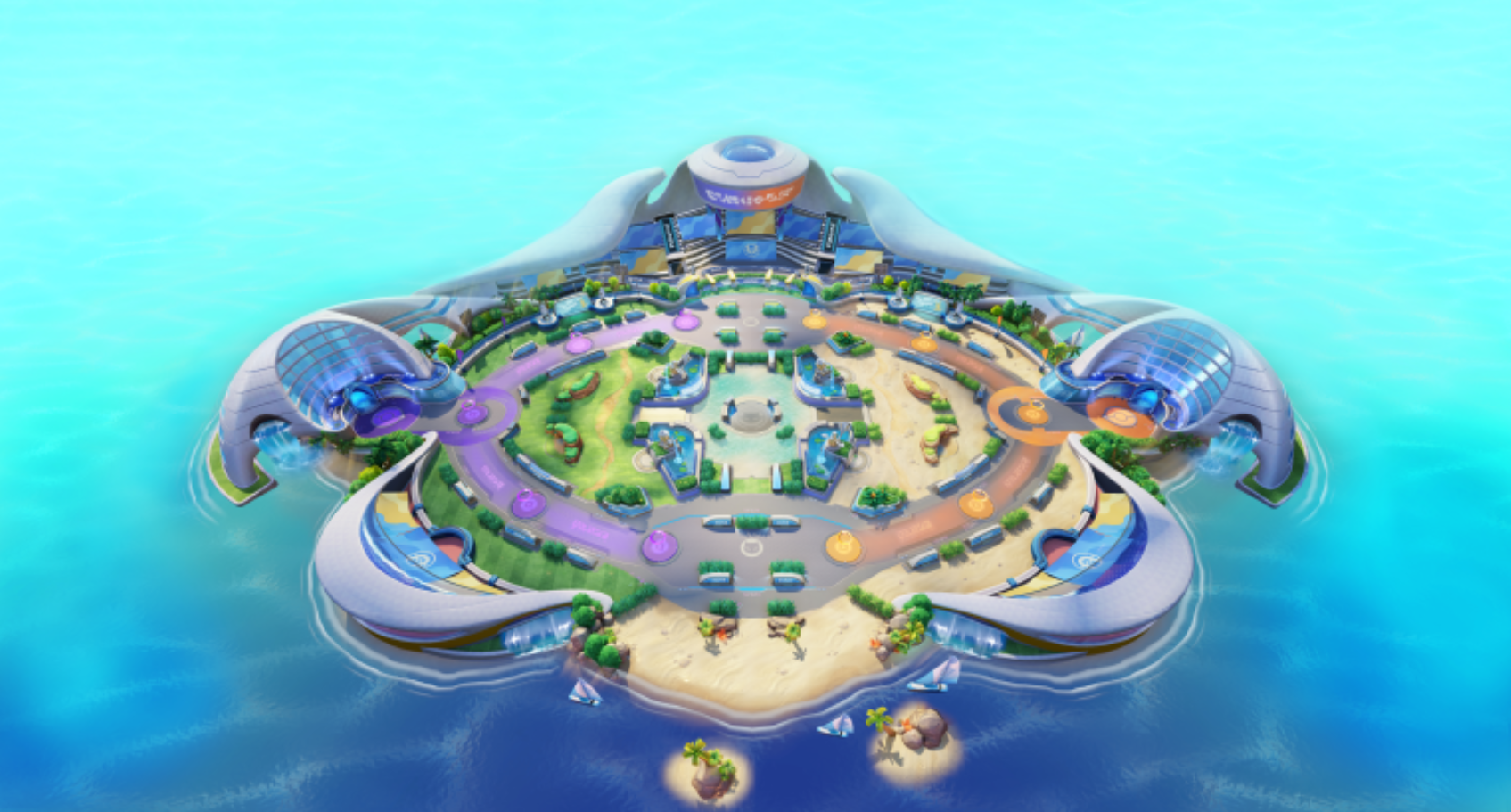 It’s safe to say that Pokemon Unite is one of the most anticipated mobile games this year – the phone-friendly port of the popular Switch game wracked up at least 5 million pre-registrations, according to the company itself, and it’s now available to download on Android or iOS.

You can find the Play Store link here for Android devices and App Store link here for iPhones, and they’ll bring you to the store listing pages (if you’re on your phone) where you can download the game – that is, if you weren’t one of the millions of people to pre-register, in which case it’ll download automatically.

Pokemon Unite is what’s known as a multiplayer online battle arena game, or MOBA, where two teams of five players compete to earn more points by collecting Pokemon then using them to fight – it’s been live on Switch for two months now, where it saw nine million downloads.

However, prolific mobile gamers may have pricked up their ears at one particular word in that previous paragraph: ‘multiplayer’. You see, mobile games which require internet connections have had troubled launches of late, and it’s natural to be uneasy at the introduction of another such title.

Analysis: will Pokemon be united or not?

Online games use ‘servers’ to host players – when you boot up the game on your device, you’ll connect to this server to play. A server can only host so many players though, and when too many try to connect, the game can crash or fail to let people connect.

We’ve seen this time and time again, most recently with Witcher: Monster Slayer, a Pokemon Go-style location game where you wander around real towns and kill ghouls and the like. The game was a hit at launch, but that meant many gamers struggled to connect, with some left waiting half a day or more to do so.

When a popular game releases, excited gamers all rush to play it as soon as possible, which means there’s a lot of demand on the servers. That’s why people can’t connect – there’s not enough supply of server space.

On Pokemon Unite launch day, popularity (and therefore server demand) could ebb and flow as each new region gains access to the game.

As hype dies down, or as gamers fall upon the walls of the servers, demand will naturally slow, so supply will catch up with the people still trying to play. We’d imagine that after a couple of hours, it’ll be easier to play Pokemon Unite online. So if at first you don’t succeed, wait a few hours and try again.

These new Alienware PCs are way too sexy

Facebook is changing its name to Meta, here's why

How social media can help your business thrive

The scariest part of Halloween this year could be how much we’re spending on it. American’s are shelling out more than $10 billion – a whopping two billion dollars more ... Read more »

Apple sued by Chinese students over iPhone's lack of cables

A group of Chinese students is suing Apple for not providing a charger with the iPhone. © Copyright 2021 The Associated Press. All rights reserved Apple China Removed Apps – ... Read more »

Two-minute review Laser projectors are starting to get a little cheaper, finally, thanks to 4K projectors like the LG CineBeam HU810P. It’s still on the expensive side, but it’s half ... Read more »

— Recommendations are independently chosen by Reviewed’s editors. Purchases you make through our links may earn us a commission. These days, you won’t be hard-pressed to find a kid who ... Read more »

Edgar Wright says that he believes directors have a “duty” to make original films if they are in a position to do so. Speaking to TechRadar ahead of the release ... Read more »

Electric boilers: a green alternative to heat pumps that no one is talking about

Electric boilers can be a green alternative to heat pumps for warming homes. Master1305/Shutterstock The UK government has recently announced new grants to encourage the public to move from gas ... Read more »

(Getty Images) The new head of Nasa has said that he “certainly” thinks that there is alien life in the universe. Bill Nelson, who was appointed head of the agency ... Read more »

vaccuum Amazon Now that many of us are heading back to the office and resuming pre-pandemic activities, you may not have time to constantly clean your home. That's why smart ... Read more »

Those Roblox npm downloads could be infected with malware

Dyson vacuums are some of the best vacuum cleaners on the market thanks to their powerful suction, large dust canisters, and in the case of its cordless models, long-lasting batteries. ... Read more »

Xbox series X stock - live: Game restock is available now – how to get the console

The Toys’R’Us relaunch will include both a bricks-and-mortar and online offering. Photo: Budrul Chukrut/SOPA Images/LightRocket via Getty In February 2018 the last Toys 'R' Us store closed its doors in ... Read more »

Queen Elizabeth was told to give up horseriding almost two months ago. The 95-year-old monarch – who was hospitalised for a night last week – is a keen equestrian but ... Read more »

23 great gifts for kids who love to read

— Recommendations are independently chosen by Reviewed’s editors. Purchases you make through our links may earn us a commission. There are few things more gratifying than the moment your child ... Read more »

The best tools for hybrid working

The pandemic has changed many things around the world, not least in the world of work, where the idea of spending all your time in an office now seems rather ... Read more »

We considered how well they fit, how good the call quality is, their build quality and value for money (iStock/The Independent) When it comes to wireless in-ear headphones, nothing made ... Read more »

Technology has tackled prejudice where governments could not, says will.i.am

Will.i.am has praised the power of technology, saying it has done “what companies and governments and cities were not able to do” when it comes to battling discrimination. Talking as ... Read more »

Beat Saber teasing Facebook Connect update – what else do we expect to see?

We’re counting down to today’s Facebook Connect Oculus Quest event, and we’re starting to get a good idea of what we’re likely to see. Following leaks earlier this week that ... Read more »

The best noise-cancelling headphones of 2021: our top ANC headphones for every budget

The best noise-cancelling headphones can seriously improve your listening experience – whether you’re immersing yourself in your favorite music or tuning out the world to focus on a podcast. Noise-cancelling ... Read more »

What's riding on Cop26 for the UK?

Cop26 is bringing together 30,000 delegates from around the world, which makes it the largest summit the United Kingdom has ever hosted. Here are five things that would make Cop26 ... Read more »

Best waterproof speakers 2021: the top outdoor speakers for any budget

Going on vacation and thinking of picking up the best waterproof speaker you can buy in 2021? Our guide has you covered. Sunny holidays can often feature a lot of ... Read more »

Have ABBA retired because their new music was a disaster?

ABBA’s two new singles haven’t got anywhere near the coveted no1 spot in the charts – Alamy My, my – ABBA have just revealed they’re breaking up. The week before ... Read more »

Volkswagen cut its outlook for deliveries, toned down sales expectations and warned of cost cuts, as a shortage of computer chips caused the world’s No. 2 carmaker to report lower-than-expected ... Read more »

France seized a British trawler fishing in its territorial waters without a license on Thursday (October 28). It also issued a warning to a second vessel as a dispute over ... Read more »

Hundreds march through Manchester over drink spikings in clu

Hundreds of people have marched through Manchester after boycotting bars and nightclubs to highlight the issue of drink spiking. It comes after almost 200 of cases including drink spiking and ... Read more »

Future Retail along with its promoters has moved the Delhi High Court requesting to stay and set aside the order passed by the Singapore-based arbitration tribunal SIAC on October 21, ... Read more »

Apple has changed the layout of tabs in Safari to give it a classic look for macs running on macOS Big Sur and Catalina with Safari 15.1. Previously, Apple released ... Read more »

As tech-savvy as we tend to be these days – relying heavily on the internet for everything from communication, information and productivity to entertainment, shopping, and banking – many Americans ... Read more »

The National Rifle Association (NRA) has released a statement saying that it is against its policy to discuss matters of security, a day after a ransomware gang claimed to have ... Read more »

Sony has sold a total of 13.4 million PS5 units to date, as per the records released by the company. According to the records, the company sold 3.3 million units ... Read more »

Facebook's whole Metaverse thing? It's simply ridiculous and we have questions

Facebook announces it is changing company name to Meta

Facebook changes its name to Meta as part of company rebrand

Facebook changes name to Meta: Mark Zuckerberg announces company rebrand as it moves to the metaverse

Ten ways to find employees for your business