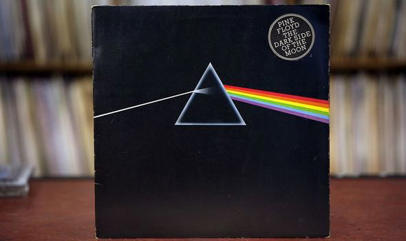 © Bloomberg/Getty Pink Floyd Dark Side of the Moon

From the original vinyl to t-shirts and merchandise, it is hard to think of a more iconic image in the music industry. Yet surprisingly, there is a lot of mathematics behind the simple geometric design and rainbow patterned artwork.

As reported by Chalkdust Magazine, the album cover shows a beam of white light hitting a triangular prism splitting into “constituent parts” (which form the rainbow).

It’s an example of an “optical phenomena” known as refraction and dispersion. This explains why the rainbow and incoming beam are not parallel and how the light splits as it passes through the prism.

The refraction within the album cover is all to do with the speed at which a beam of light travels (depending on the medium) which could be glass, air or water.

Given the medium, mathematics can compute refractive index:

n is close to 1, while for glass it is about 1.5 therefore light travels slower through glass than through air.

Light normally takes the fastest path and the difference in speed between air and glass means that the shortest path in terms of distance may not be the fastest one.

Moving onto angles, θ1 and θ2 are measured from the normal to the material interface.

Since glass has a higher refractive index than air (n2>n1n2>n1), a light beam passing from air into glass will bend towards the normal (θ1>θ2θ1>θ2).

When the beam leaves the other side of the prism, the reverse happens and the angle increases again. 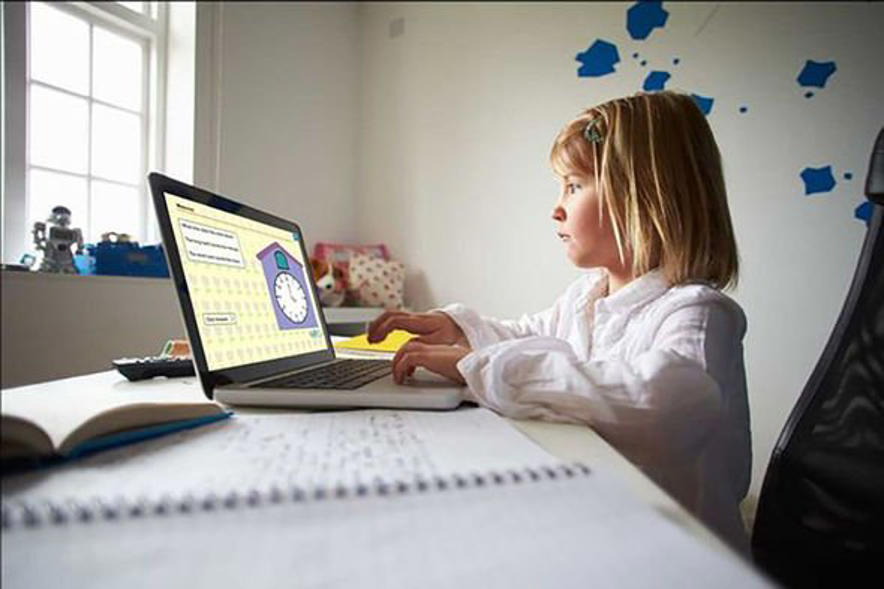 Maths-Whizz is a super clever virtual maths tutor which delivers interactive games, lessons and exercises for five- to 13-year-olds.

To see how good it is at transforming home learning for parents, we’ve negotiated an exclusive 20% off price to make it £15.99 for the first month.

See if you like it first and sign up to a 7-day no-obligation free trial by clicking here. If you want to sign up for a month at a time or even a year, you can do that here but don’t forget to use the promo code “MATHS20”.

In terms of the change in angle on the prism, it can be computed by a quadrilateral (made up of the prism and the beam of light.)

It’s an example of “Snell’s law” which in maths is described as “a formula used to describe the relationship between the angles of incidence and refraction”.

Sean said: “Given an entry angle θ1, Snell’s law allows us to calculate θ2. We can then sum up the angles in the red quadrilateral, which gives θ3.

“In terms of θ1 and the refractive indices n1 and n2, we apply Snell’s law again at the point where the light exits to give us θ4.”

The multi-coloured beam is the only glimpse of colour we get on this album cover, and although the rainbow is minimal, it is contrasting to the black background.

Sean explained: “Where λ is the wavelength of the light, A and b are constants that depend on the material.

“In air, the value of b is very small (about 10−18) and so the refractive index can be set to a constant, which means that our light beam arrives at the prism with all the colours hitting at the same place and time.”

Designer Hipgnosis knew a thing or two about maths when designing the album cover. By combining the ideas of refraction and dispersion we can calculate the exact journey that the light beam takes.

Next time you listen to Pink Floyd, take a look at the album cover and prepare to have your mind blown from the maths in front of you.

Kunal Kemmu on the positive side of the pandemic: Parents could work on their relationship with their children

LietoVoices! set to celebrate holiday season with pair of concerts

Dad who witnessed tot get crushed to death describes his agony

Bollywood’s Dhak Dhak Girl, Madhuri Dixit has been married to Dr. Shriram Nene for over two decades now. The couple celebrates 22 years of their togetherness this year with a ... Read more »

© Provided by Daily Mail MailOnline logo Chrissie Swan was eliminated on Sunday night’s episode of Celebrity MasterChef Australia after failing to impress the judges with her dish centred around ... Read more »

Give them the finger: Virat Kohli explains India's spin shift

Singer Meat Loaf's legendary career started in Michigan: The story in his own words

NOVI, MI – His powerful operatic voice is unmistakable. He’s sold more than 60 million albums worldwide over his more than 40-year career and starred in dozens of movies and ... Read more »

© Provided by WION Wonder Women will be back soon! During the DC FanDome event, ‘Wonder Woman’ and ‘Wonder Woman 1984’ director Patty Jenkins took part in a conversation with ... Read more »

© ES Composite WestHamPredictedXIAntoniov1.jpg Vladimir Coufal has failed a late fitness test so Ben Johnson starts at right-back for West Ham against Everton today. That is the only change from ... Read more »

© Copyright (c) Daily Maverick , All Rights Reserved  A former Chiefs star was beaten to death last week as a result of gruesome mob ‘justice’. His aunt spoke out ... Read more »

© Provided by Daily Mail MailOnline logo Elvis Presley’s drummer, Ronnie Tutt, has died aged 83.  The sticksman was a member of the TCB, or Taking Care of Business, Band, ... Read more »

© Provided by Zee News New Delhi: The bold and beautiful Sushmita Sen has always advocated for women to buy their own diamonds and to date, she revealed, she doesn’t ... Read more »

Alex Gonzaga reveals miscarriage: "We finally closed the book of our first pregnancy."

Kourtney Kardashian has reportedly been accused of “acting like a brat” during a “row” on a flight. The 42 year old allegedly left her fellow passengers reeling after spending a ... Read more »

WION exclusive: Salim-Sulaiman- Art is one aspect, humanity has gone out the window in Afghanistan

© Provided by WION Straight shooters. High achievers. No-holds-barred interviewees. The Merchant brothers—popularly known as Salim-Sulaiman in Indian music industry—have no qualms about sharing space with other musicians. “(One) should ... Read more »

© J.M. HAEDRICH/SIPA. Instead of conquering the acting world like her parents, Demi Moore and Bruce Willis’s daughter, Scout Willis, has decided to take on the music world. On Oct. ... Read more »

Sunday is Black Poetry Day. It is the birthday of Jupiter Hammon, who was the first African American to have poetry published in the United States. This day celebrated the ... Read more »

© Provided by The Indian Express Vatsal Sheth on Sunday surprised his fans by sharing a throwback photo. Apart from seeing his younger self, fans were also treated to a ... Read more »

The Connected Experience: How tech is making the world a better place

© Provided by 702 The “Future is an attitude” podcast series presented by Audi features inspirational South Africans who think differently about the future and who challenge the status quo ... Read more »

Muller started race two from pole position in his Cyan Racing Lynk & Co, but Vernay had the inside line into the fast chicane at Turns 1 and 2 to ... Read more »

Valorant: Who Is Jett's Voice Actor?

‘A need to go further': Labour warns government against complacency over vaccine rollout

© AFP via Getty Images coronavirus Labour has written to health secretary Sajid Javid to express concern over the current state of England’s Covid vaccination programme and call upon the ... Read more »

© Provided by The Indian Express Taapsee Pannu is on cloud nine as her recent release Rashmi Rocket is receiving overwhelming response since its release. The actor on Sunday shared ... Read more »

© Provided by News18 It has been just two days since Diljit Dosanjh, Shehnaaz Gill and Sonam Bajwa’s comedy-drama Honsla Rakh was released, but the film is already breaking records ... Read more »

© Provided by News18 The rumoured relationship between Bollywood actors Vicky Kaushal and Katrina Kaif has garnered a lot of buzz since it was first reported. The actors have been ... Read more »

Murder probe after schoolboy, 14, killed in ‘shocking act of violence'

Nine stats behind Salah, Mane and Firmino's incredible start to 2021-22

Singer Froukje has lost her voice and cancels shows

Norris felt ready to win even before Russian Grand Prix

There's a 'Southport rap' with thousands of views on Youtube

Arrests after 18 people killed by drinking contaminated alcohol in Russia

Soldier who died in training exercise on Salisbury Plain is named

UFC Vegas 40, The Morning After: Shoutout To The Old Guys