NASA has finally finished building its next moon rocket, and it’s a behemoth.

Towering at 322 feet, the Space Launch System (SLS) is taller than the Statue of Liberty, which is 305 feet high. The system has to be that large to produce enough thrust to push its Orion spaceship all the way around the moon – 1,000 times farther than the International Space Station. NASA intends to use this launch system to put boots back on the lunar surface for the first time since 1972 and, eventually, to build a long-term base there.

But first, SLS has to fly around the moon without any astronauts onboard – a mission called Artemis I – to prove that it can safely carry humans on future flights. NASA aims to launch that mission in February.

So far this year, the agency has test-fired the rocket’s engines and shipped all the parts to the Kennedy Space Center in Cape Canaveral, Florida. There, NASA engineers and technicians have been slowly stacking the pieces of the rocket in a vertical-assembly building. They secured the final piece – the Orion spaceship – just before midnight on Thursday, making the whole system 23 stories tall.

“It’s a heck of a sight, and it is really nice to see,” Mike Bolger, who manages the facilities at Kennedy, said in a briefing on Friday. “The rocket’s so big that, to fully appreciate it, you need to get a little bit of distance from it to actually see it top to bottom.”

SLS is three years behind schedule and nearly $3 billion over budget. But the rocket is finally whole, and its first launch is within NASA’s sights.

Until June, the SLS’ solid rocket boosters – white mini-rockets that attach to either side of the rocket to give it an extra boost – sat alone in the assembly building. That’s when NASA lifted the rocket’s core stage into the building and lowered it in between the boosters.

The core stage is the biggest piece of SLS and its structural backbone. It’s also the world’s largest and most powerful rocket stage, according to NASA. 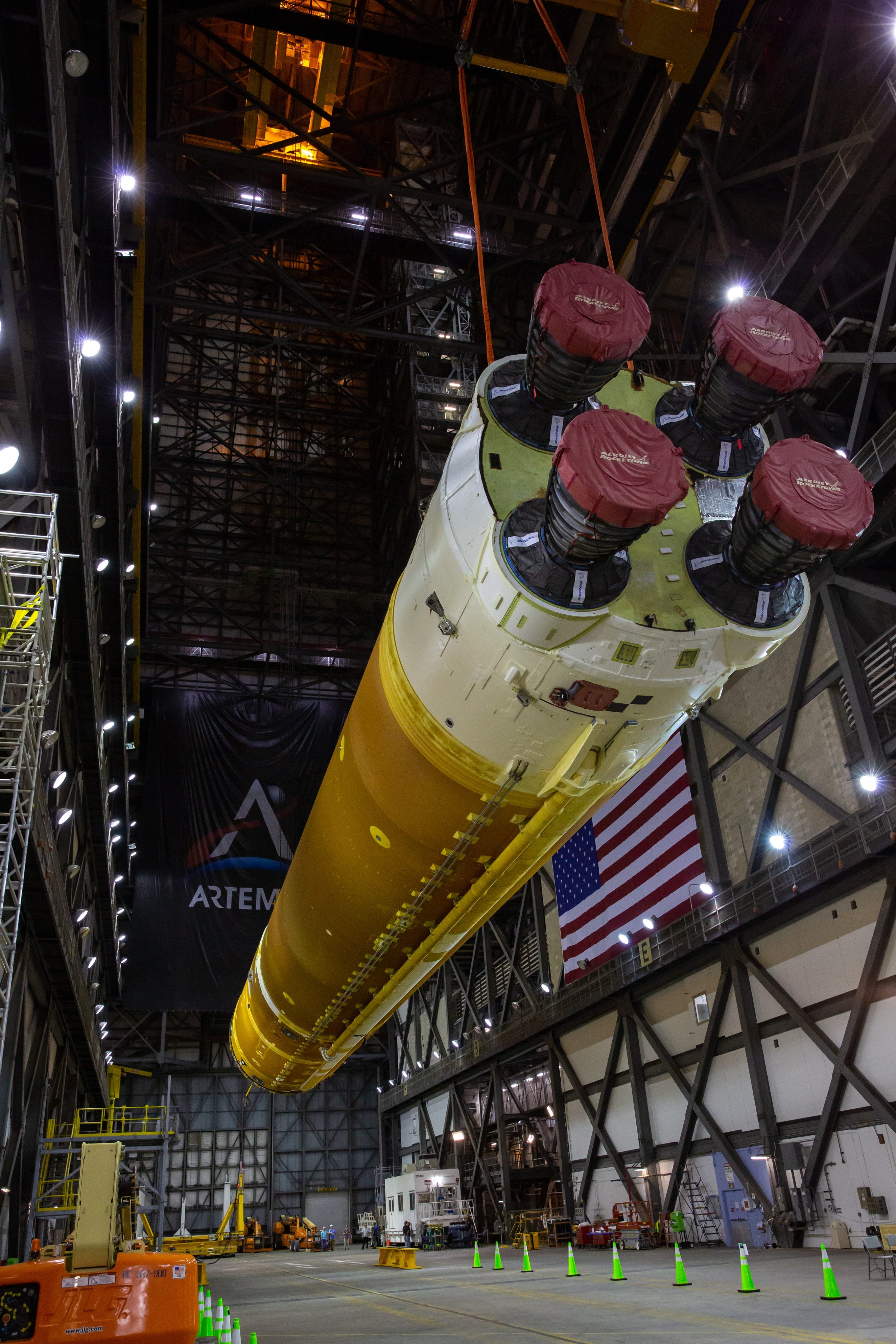 Getting the core stage into the stacking facility was no easy feat. NASA shared a time-lapse video of the process, below.

With the core stage in play, rocket-stacking began in earnest. In July, NASA added the interim cryogenic propulsion stage, which is supposed to give the Orion spaceship one final push towards the moon after the core stage falls away, high above Earth.

Technicians then hooked up all the lines, called “umbilicals,” which provide power, communications, and fuel to the rocket.

“While all that was going on, in parallel facilities here at Kennedy, we were fueling the Orion spacecraft and readying it for flight,” Bolger said.

Finally, Orion was ready this week. NASA lifted it to the top of the vertical-assembly building and lowered it onto the propulsion stage, finishing the stacked rocket with a pointy top.

Now, technicians must finish connecting and integrating all the final pieces. They’ll conduct more tests to verify that the parts are working together properly. If that goes according to plan, NASA plans to conduct a “wet dress rehearsal” in January, practicing all the launch-day procedures, including loading the rocket with 730,000 gallons of liquid propellant.

If the agency isn’t ready to launch in February, it has back-up opportunities in March and April.

Støre: We are working on tightening the rules for entry to Norway

Does converting classic cars to electric make them better?

NASA has plans to put a nuclear power plant on the Moon within this decade but it's publicly asking for help to make it happen. The space agency and the ... Read more »

ANNE Robinson has broken her silence on her Countdown 'feud' with Rachel Riley – admitting 'I'm hard to please'. The Sun revealed how the pair have clashed over dressing rooms, ... Read more »

A MUM has revealed how her breast milk drastically changes in colour depending on how her baby is feeling. Jessica Gancedo shared a video on TikTok where she showcased the ... Read more »

I’M A Celebrity is facing further chaos as the damage caused by Storm Arwen has forced producers to CANCEL Monday night's episode. ITV was forced to cancel last weekend’s episodes of the ... Read more »

AS any parents will know, taking kids shoe shopping can be a very trying experience. But one clever mum has come up with a way to take the stress out ... Read more »

Why you should never put a padlock on your suitcase

EVEN if you want to make your suitcase more secure, you should avoid putting a padlock on it when going on holiday. A baggage handler has explained how locks don't ... Read more »

Strictly Come Dancing may have aired its queerest episode yet, with a fiery tango from Johannes Radebe and John Whaite, and an incredible performance from Years and Years. Radebe and ... Read more »

A 14-year-old boy has been remanded in secure accommodation after appearing at Liverpool Magistrates’ Court charged with the murder of Ava White, 12, who was stabbed in the city centre ... Read more »

People queue outside an Iceland supermarket in London back in March 2020 – Shutterstock Face masks have once again become mandatory in shops in England from this morning, but one ... Read more »

France is to put forward proposals for tackling the Channel migrant crisis as the interior minister suggested talks with the UK could resume. Gerald Darmanin has said prime minister Jean ... Read more »

Voices: We must address the root causes of knife crime to prevent tragedies like Ava White's death

12-year-old Ava White died after she was stabbed following an argument in Liverpool city centre (PA) Knife crime is yet again in the headlines, as the 14-year-old boy remanded in ... Read more »

© Provided by dw.com The ’emergency brake’ required regions to put curfews in place above a certain infection rate Restrictions imposed by the German government on the populations of individual ... Read more »

Oppo is seemingly planning to bring a slew of new products to India next year. Apart from the Reno 7 series phones that are reportedly coming to the Indian market ... Read more »

DNA Explainer: What rulebook says regarding suspension of MPs, why were 12 Rajya Sabha MPs suspended

© Provided by DNA A dozen members of opposition parties in Rajya Sabha have been suspended from the winter session of the Parliament on the very first day following a ... Read more »

Mamata Banerjee to Call on Sharad Pawar During Mumbai Visit; No Meet With Uddhav Thackeray as CM in Hospital

© Provided by CNBCTV18 Paytm, country’s digital ecosystem for consumers and merchants, on Tuesday announced that its wholly-owned subsidiary Paytm Payments Services Ltd (PPSL) has made strides with its card-on-file ... Read more »

Omicron scare: Is it a good time to add diagnostics stocks to your portfolio?

© Provided by CNBCTV18 Diagnostics stocks are in demand once again on Dalal Street, as benchmark indices attempt to recover from Friday’s sell-off following the news of the new COVID-19 ... Read more »

In Thailand, Myanmar exodus a lifeline for COVID-battered economy

Don't Socialise If You Don't Need To, Health Chief Says Amid Omicron Concerns

EXCLUSIVE: Katrina Kaif to shoot for THIS film from December 15 after marriage with Vicky Kaushal; Read Deets

'Naa Kosam' song from Nagarjuna's 'Bangarraju' out on Dec 1

Threatened by Omicron, EU states urged to test more as some lag