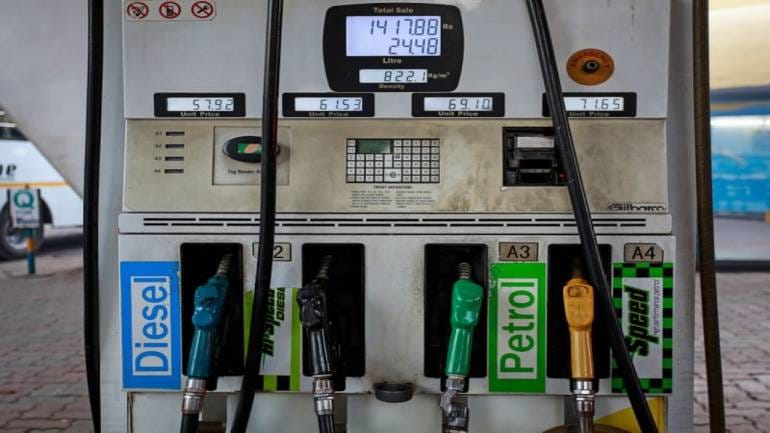 Petrol and diesel prices were hiked for the fourth consecutive day on Saturday by 35 paise per litre, pushing the total increase in rates on petrol to Rs 36 per litre and on diesel to Rs 26.58 since early May 2020 when taxes on the two fuels were raised to record levels.

Petrol in Delhi now costs Rs 107.24 a litre and diesel comes for Rs 95.97, according to a price notification of state-owned fuel retailers.

The latest increase that follows the unrelenting hike in international oil prices has pushed pump rates across the country to their highest-ever levels.

While petrol is above Rs 100-a-litre-mark in all major cities, diesel has crossed that level in more than a dozen states.

The total increase in petrol price since May 5, 2020 decision of the government to raise excise duty to record levels now totals Rs 35.98 per litre.

Diesel rates have during this period gone up by Rs 26.58 per litre. The total increase in petrol price since May 5, 2020 decision of the government to raise excise duty to record levels now totals Rs 35.98 per litre.

The government had raised excise duty on petrol and diesel to mop up gains that would have otherwise accrued to consumers from international oil prices crashing to as low as USD 19 per barrel.

While international prices have since recovered to USD 85, excise duty has remained at Rs 32.9 per litre on petrol and Rs 31.8 on diesel.

“I think this simplistic political narrative we get in India (that), ’prices have gone up, why don’t you reduce your taxes’… so every time price goes up due to something else, it says you axe your own feet in the process,” he had said late on Friday.

He was asked a question on whether the government would cut taxes, which make up for 54 per cent of the price of petrol and over 48 per cent of diesel, to ease the burden on consumers.

“Yesterday (on October 21) we completed vaccinating one billion (against COVID), we fed 90 crore people for one full year (during the pandemic) providing 3 meals in a day, we did Ujjwala scheme (of providing free cooking gas LPG refill to 8 crore poor beneficiaries). All this and much more with that Rs 32 a litre excise duty (levied by the central government),” he had asserted.

The money collected from tax also goes into building roads, constructing houses for the poor and other social welfare schemes.

“I am not the finance minister therefore it is not an appropriate answer for me to give,” he said on demands for cutting taxes.

“That Rs 32 a litre that we collect provides us the ability to provide all these welfare services, including 1 billion vaccines.”

The increase in fuel prices has stoked concerns over inflation as diesel is the mainstay fuel used for transporting goods, including agri commodities.

Opposition parties including Congress have been critical of the government over the price hikes and have demanded a reduction in taxes.

Puri had said that while the centre levies specific excise duty on petrol and diesel, which does not change if the oil prices fall to USD 19 per barrel or rise to USD 84, state governments levy ad valorem rate of VAT whose incidence goes up with every hike.

He said petrol price was decontrolled in 2010, effectively making it linked to world markets. Diesel prices were freed from government controls in October 2014 by the Modi government.

Kerala High Court, he said, had suggested that the inclusion of petrol and diesel in the Goods and Services Tax (GST) regime be put before the GST Council.

And when the Council considered it at its meeting in Lucknow last month, “the state governments thought otherwise,” he said, referring to the panel’s decision not to include petrol and diesel in the GST regime which would have meant subsuming central excise and state VAT into one uniform tax.

Finance Minister Nirmala Sitharaman had after the GST Council meeting stated the panel had unanimously decided to continue to keep petrol and diesel out of the GST regime.

The Council is headed by the Union finance minister and comprises representatives of states and UTs.

Though he did not link them to the current fuel prices, the bonds are among the factors that BJP leaders have been blaming for the rise in fuel prices.

Petrol and diesel as well as cooking gas and kerosene were sold at subsidised rates during the previous Congress-led UPA government.

Instead of paying for the subsidy to bring parity between the artificially suppressed retail selling prices and the cost that had soared because of international rates crossing USD 100 per barrel, the then government issued oil bonds totalling Rs 1.34 lakh crore to the state-owned fuel retailers.

These oil bonds and the interest thereon are being paid now. Of the Rs 1.34 lakh crore of oil bonds, only Rs 3,500 crore of principal has been paid and the remaining Rs 1.3 lakh crore is due for repayment between this fiscal and 2025-26, according to the finance ministry.

Of the Rs 1.34 lakh crore of oil bonds, only Rs 3,500 crore of principal has been paid and the remaining Rs 1.3 lakh crore is due for repayment between this fiscal and 2025-26, according to the finance ministry.

Minister of State for Petroleum and Natural Gas Rameswar Teli in July told Parliament that the Union government’s tax collections on petrol and diesel jumped by 88 per cent to Rs 3.35 lakh crore in the year to March 31 from Rs 1.78 lakh crore a year back.

Rage Festival refunds: Organisers say they will assess on case by case basis

A further nine cases of the Omicron variant of coronavirus have been identified in England, according to the UK Health Security Agency (UKHSA). © PA Archive Coronavirus – Wed Jun ... Read more »

Some Omicron cases are reportedly experiencing “mild” symptoms and experts should have more information about the transmission of the new COVID variant within days, an epidemiologist at the World Health ... Read more »

What does the red ribbon mean? Why Boris Johnson and other MPs are marking World Aids Day, and how to get one

If you watched Prime Minister’s Questions this week, you might have noticed Boris Johnson, Sir Keir Starmer and other MPs wearing red ribbons on their jackets. These ribbons are in ... Read more »

Josh Duggar, star of 19 Kids and Counting, is on trial for two counts of downloading and possessing child sexual abuse images. Mr Duggar was arrested in April by US ... Read more »

An exceptional set of bed sheets could be the missing link to getting a great night of sleep. If your bedding feels too pilled, too stiff, or too threadbare to ... Read more »

Terminal 4 to be used for passengers from 10 red-list countries in southern Africa Heathrow has reopened a terminal dedicated to processing passengers flying into London from countries on the ... Read more »

Care groups and charities have welcomed the Government’s “vision” to improve social care but said more funding is urgently needed to deliver this and pull the sector “back from the ... Read more »

The Southlake Department of Public Safety is seeking help to identify men involved in lighting fireworks inside a porta potty about two weeks ago. The incident, which occurred on Nov. ... Read more »

The best 2-in-1 laptops you can buy

The perfect hybrid machine that’s just as good a tablet as it is a laptop still doesn’t exist. But, in 2021, companies like Microsoft, Apple and Google continued to improve ... Read more »

The Riverside County Sheriff's Department arrested two people Tuesday that it suspects were involved in a string of burglaries at a self-storage center in Palm Desert. Members of the department's ... Read more »

With 2022 and CES just around the corner, Samsung is ready to introduce new updates to its popular and budget-friendly A-series, which has helped keep sales strong for the Korean ... Read more »

Why You Should Carry Naloxone

© Provided by Chatelaine A woman’s hands spraying naloxone into the air against a dark blue background. (Photo: Erik Putz) When Leigh Chapman’s brother died of an opioid overdose in ... Read more »

New York opens the US’ first safe injection sites after fatal wave of overdoses Following a surge in overdose deaths across the US, New York City will open two supervised ... Read more »

You know how macaroni and cheese tastes better when it’s in fun shapes (as opposed to the classic ones)? We have a theory that you can apply that thinking to ... Read more »

The markets, along expected lines, had a buoyant but somewhat volatile session on Wednesday where it managed to end with decent gains. A start above the 17,000 levels lead to ... Read more »

FILE PHOTO: A COVID-19 patient connected to a ventilator tube in the Intensive Care Unit (ICU) at the Centre Cardiologique du Nord private hospital in Saint-Denis, near Paris, amid the ... Read more »

© Provided by Financial Post The current increases in overall price levels are in reality the product of “excess money growth” that has occurred in many countries. A new Bank ... Read more »

Trump Tested Positive for COVID Before Biden Debate, Not After, Says His Ex-Chief of Staff

The moment Thanksgiving is over, it’s time to swap out the pumpkin spice treats for ones that are more seasonal, like peppermint. Candy canes are the obvious option to get ... Read more »

NEW YORK (AP) — ABC will air an hourlong special Thursday featuring George Stephanopoulos’ interview with Alec Baldwin about the fatal shooting on the set of the movie “Rust.” © ... Read more »

New dinosaur species from Chile had a unique slashing tail

1 / 2Bizarre DinosaurThis illustration provided by Mauricio Alvarez shows a Stegouros. Fossils found in Chile are from the bizarre dog-sized dinosaur species that had a unique slashing tail weapon, ... Read more »

By Lewis Krauskopf A pileup of risks into year-end has some investors gauging whether December will continue its historical trend of a strong stock performance, even as markets face of ... Read more »

A FORMER RYANAIR flight attendant has revealed one of the stupidest questions she was often asked during the job. Fiona Mallinson, who used to work for the budget airline, shared ... Read more »

Russell James Peterson at the Capitol riot in a A Capitol riot defendant who traveled to D.C. on Jan. 6 with his mother and stormed the U.S. Capitol while wearing ... Read more »

IT’S normal for people to experience death at least once in their lifetime – but Elizabeth Coffey refers to herself as “a cursed freak of a Grim Reaper”. The 58-year-old ... Read more »

SHERIDAN Smith put the £1.5m home she shared with ex-fiancé Jamie Horn on the market just days before The Sun exclusively revealed details of her high-speed car crash. The 40-year-old ... Read more »

Bomb found near the US ambassadorial residence in Reykjavik