Pensioner John expressed his disappointment with the Chancellor’s speech stating he will have a “rough year next year”. Speaking on the BBC Money Box podcast. he said: “There was no mention of the pension. He took away the eight percent from the triple lock.

“The British pensioners are probably the lowest paid pensioners in Europe, so it’s done nothing to help us.

“With a forecast inflation of five percent, we’re going to have a rough year next year.”

The triple lock is the term given to the Government’s promise to raise the state pension by either the rate of inflation, average earnings growth, or 2.5 percent.

Due to the pandemic and furlough artificially inflating earnings across the country, Prime Minister Boris Johnson and Chancellor Rishi Sunak have opted for a “double lock” for at least a year and will not include earnings as an indication. 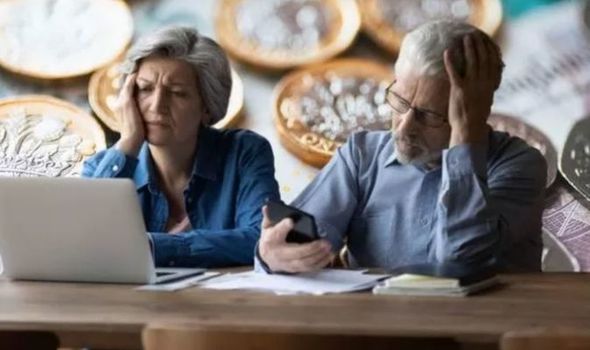 © GETTY State pension Despite the public outcry over the triple lock scrap, state pensions are set to go up by 3.1 percent next year in line with inflation.It means the full new state pension will be around £185.17 per week for the 2021/22 tax year.This is up by £5.57 from the previous year when it was £179.60, which means claimants will get an extra £289.64 per year, with their income jumping from £9,339.20 for a full 12 months up to £9,628.84.Laura Suter, head of finance at AJ Bell said: “What we did hear in the budget today is we’re expecting average inflation over the next year to be four percent.DON’T MISS‘Huge blow’ as Cold Weather Payment rise absent from Budget – can you get the £25 payment? [ANALYSIS]‘Welcome news’ for UK property owners as Rishi Sunak announces Capital Gains Tax changes [UPDATE]‘You can’t come back from this!’ – The ‘biggest’ pension mistakes retirees make [INSIGHT]

“So, pensioners aren’t even getting an increase that keeps in line with rising costs.”

Tax expert Heather Self explained that by having the double lock in place, the Chancellor is saving £5.4billon next year, and this could rise to £6billion in subsequent years.

On the Government’s state pension decision, Lord Prem Sikka said: “I am opposing the suspension of the triple lock because it condemns current and future retirees to a life of misery.

“The average state pension of £8,000 is around 25 percent of average national wage, the lowest in the industrialised world. 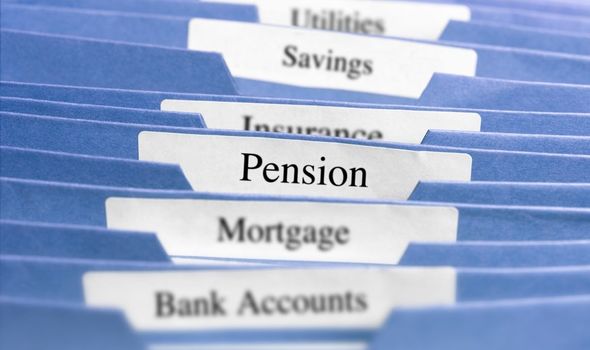 “The proportion of retirees living in severe poverty is five times what it was in 1986. Around 2.1 million pensioners live in poverty. Some 1.3 million retirees are undernourished and 25,000 die each year due to cold weather.

“The maintenance of the triple lock enables retirees to meet the rising cost of food and energy.

“The government’s election pledge can easily be met through the £37billion surplus in the National Insurance Fund account”.

Rishi Sunak also failed to announce any additional measures today to help the elderly this winter despite their finances being squeezed more than previous years.

John continued: “He left the Winter Fuel Allowance which I thought he would have increased because of the increasing cost of fuel.

Paul Lewis, presenter of the podcast agreed with John and stated that this allowance should possibly be three times more than the current rate, or at least double that.

The Winter Fuel Payment is a benefit from the government which allows pensioners to receive some money towards their heating bills. This could be worth as much as £300 for some people. The payment is tax-free and receiving it will not affect a claimant’s ability to receive other benefits.

'The Book of Boba Fett' — release date, trailer, cast, plot and and all you need to know

Barcelona to 'start from scratch' after Champions League exit

Kristin Davis and Cynthia Nixon paid tribute to Garson, who played Stanford Blatch in the series, during an appearance on "The Late Show With Stephen Colbert." Read more »

VALORANT Champions: Team Secret bow out with 0-2 loss to Acend

Filipino hopefuls Team Secret’s journey at VALORANT Champions 2021 has come to an end, after they fell to Europe’s Acend in a 2-0 sweep in the Playoff quarterfinals on Thursday ... Read more »

More than 200 firms have been named and shamed by government for not paying their staff the minimum wage – including Matalan. The list of 208 companies did not pay ... Read more »

I'm A Celebrity: Viewers all in agreement after Naughty Boy eliminated

I’m a Celebrity viewers can all agree on one thing after Naughty Boy was eliminated from the castle tonight. The music producer was controversial during his time in camp, regularly ... Read more »

© Provided by This Is Money MailOnline logo Private equity barons at Bain Capital could tap into supposedly ‘ring-fenced’ member funds at LV following a successful purchase of the mutual ... Read more »

© Provided by Cover Media Ryan Reynolds Ryan Reynolds has opened up about his decision to take a break from acting in order to spend time on other projects. Speaking ... Read more »

Video: I'm A Celebrity: 'It's a bloody joke': David Ginola left unimpressed as he misses out on letter from home AGAIN

Video: Not bitter then, Hillary? Clinton breaks down in TEARS as she gives cringeworthy reading of the 2016 victory speech she WOULD have given if she'd beaten Trump to become the first female US President

Video: 'It's going to be an infrastructure decade': Biden dubs himself 'Mr. Amtrak' and pays homage to Republican Bob Dole as he tours bus facility in Kansas City to promote his $1.2 trillion bipartisan bill

Back-to-back defending LEC champion MAD Lions will be entering the 2022 season with a lot of changes to its roster.  After a very successful year in the LEC with two ... Read more »

Masahiro Sakurai says a sequel to Super Smash Bros. Ultimate is not in the works and may not happen at all

© Provided by Dot Esports Super Smash Bros. series creator and director Masahiro Sakurai has been open about his thoughts and concerns surrounding the future of the franchise now that ... Read more »

IS Boots' top-selling Christmas hair tool really a cut above? Siobhan O'Connor compares the £70 Revlon volumiser with the feted £450 Dyson Airwrap and gives her verdict. Here, we compare ... Read more »

Sly and Robbie's Robbie Shakespeare has died, according to reports

© Provided by Dot Esports Team Liquid took down Cloud9 Blue today in a close series, despite it only going to two maps, to advance to the semifinals of VCT ... Read more »

MARKET REPORT: Only the start for 'partner of choice' Ocado

© Provided by This Is Money MailOnline logo Grocery delivery giant Ocado got a boost after a broker branded it the ‘partner of choice’ for supermarkets looking to cash in ... Read more »

‘Bully' bouncer repeatedly knees clubber, throws him on floor and punches him on the ground in shocking footage

A BOUNCER filmed repeatedly punching and kicking a clubber “who didn't try and fight back once” has been sacked. Louise Robinson-Jones filmed the Pro-Tect Security employee brawling with a male ... Read more »

© Provided by This Is Money MailOnline logo TUI has warned that the Omicron variant is hitting holiday bookings as it racked up a second annual loss of more than ... Read more »

India may be one of the largest markets for telecom and broadband, but there are still over 25,000 inhabited villages without mobile and internet coverage. These villages, however, also include ... Read more »

© Provided by The Indian Express THERE IS a growing voice in favour of reintroduction of the National Judicial Appointments Commission (NJAC) Bill, Law and Justice Minister Kiren Rijiju told ... Read more »

© Provided by GamePur For a limited time, all United States Final Fantasy XIV players will have the chance to receive an Eat Pizza emote if they participate in the ... Read more »

© Provided by The Indian Express On Wednesday morning, Rajya Sabha saw disruptions before the Opposition boycotted proceedings for the rest of the day. As Opposition leaders kept demanding that ... Read more »

© Provided by GamePur PUBG Mobile is rumored to soon have a crossover with Netflix’s most popular series, Squid Game. As per the leaks, the crossover will feature Squid Game ... Read more »

© Provided by Interaksyon Vice President and presidential aspirant Leni Robredo recently debunked two doctored Facebook posts she claimed were posted against her and her supporters. The public official on Sunday tagged ... Read more »

Warzone Pacific Season 1 is here and fans of the game have started to figure out which weapons from Vanguard translate best. The Automaton has been arguably the best overall ... Read more »

© Provided by The Indian Express The Gujarat BJP’s minority morcha has appointed three special social conveners from the Parsi, Sikh, and Christian community to bring people from those communities ... Read more »

© Provided by GamePur The VGC reports that CD Projekt Red has is about to enter settlement negotiations with some of its investors. Early in the year, a group of ... Read more »

Yone has a crazy anime-style Pentakill animation on PBE

Yone and Yasuo are two of League’s more unapologetically anime-inspired characters, warrior brothers with magical abilities and dark pasts. Riot Games appears to be doubling down on this with a ... Read more »

What happened on the day John Lennon was shot?

Former Beatle John Lennon was shot and killed 41 years ago in New York City on 8 December 1980. Lennon, who was 40, was entering his Manhattan apartment building on ... Read more »

Russia vowed to continue talking following a video call between President Vladimir Putin and U.S. President Joe Biden, despite a massive troop buildup on the border of Ukraine and expectations ... Read more »

Biden says putting U.S. troops on ground in Ukraine is 'not on the table'

Blue Prism moves a step closer to a takeover as UK tech star's board backs US rival SS&C's £1.24bn offer

Leader of House minority caucus to step down at year's end

“My Story Is But One of Many”: Selma Blair Advocates for Actors With Disabilities at Women in Entertainment Event

Tom Holland ADMITS he wants to make a movie with Tobey Maguire and Andrew Garfield: It would be nice

Stephen Colbert Reveals His Role That Got Away