A number of Liverpool supporters have bemoaned Paul Joyce’s update confirming that Thiago will miss the Premier League clash with Manchester United. 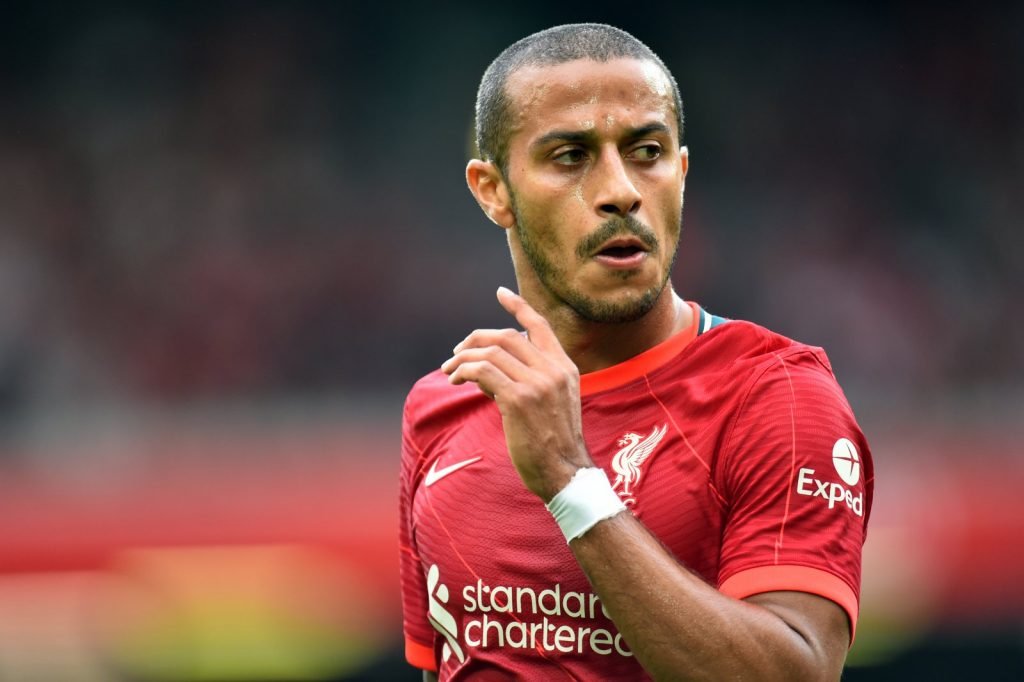 The Reds face one of their most important games of the season on Sunday afternoon, with United awaiting at Old Trafford.

It has been an ideal return for Liverpool since the international break, with Watford thumped at Vicarage Road and Atletico Madrid also beaten away in the Champions League.

Victory at United this weekend would feel like another major signal of intent, but one player who won’t be available is Thiago, as confirmed by Joyce on Twitter on Friday.

The Spaniard is still missing with a calf injury and Jurgen Klopp has admitted he may not return until after next month’s internationals.

These Liverpool fans took to Twitter to react to the news, with negativity the order of the day.

“Thiago takes waaaayy too long to recover from injuries“

“Our injuries always seem to last longer than average“

In other news, some Liverpool fans love footage that has emerged of one player. Find out who it is here.

A former F1 racer has claimed that some of Max Verstappen‘s energy is “being drawn away from the track” by Lewis Hamilton‘s incredible performances in the last two races. Both ... Read more »

Manchester United seemed to pull off quite the coup when paying around just £15million for Alex Telles last year. Telles had experience playing for Galatasary and Inter Milan, and the ... Read more »

The son of pastor Douglas Wilson of the controversial Christ Church in Moscow, Idaho, and a close associate have made significant inroads into mainstream culture in America with a successful ... Read more »

Steven Gerrard and his Aston Villa players made yet another statement with a comfortable and workmanlike victory to inflict Crystal Palace’s first home defeat of the season. From Emi Martinez ... Read more »

Best GHD Black Friday deals: up to 22% off hair straighteners, dryers and tongs

(GHD) Black Friday, the shopping extravaganza of the year, is very nearly here. Although not officially kicking off until November 26, brands and retailers are already dropping early deals ahead ... Read more »

Pittsburgh Steelers cornerback Joe Haden (23) throws down Cincinnati Bengals wide receiver Tee Higgins (85) after a catch in the first quarter of the NFL 15 game between the Cincinnati ... Read more »

Video: 'Queen of Christmas' Mariah Carey rings in the holiday season by slipping into a red dress to relax by her fireplace adorned with twinkle lights and ornaments

The magic has not run out for the LSU Tigers and Ed Orgeron. Facing a four-point deficit with under two minutes remaining in the game, Max Johnson engineered the comeback. ... Read more »

The United States, United Kingdom, Australia and several other countries imposed travel restrictions at the end of November on South Africa and at least seven other African countries after the ... Read more »

People queue for a flight to Paris from Johannesburg (AP) Australia and several other countries have joined nations imposing restrictions on travel from southern Africa after the discovery of a ... Read more »

WATCH: 'Tremendous victory' as Barcelona break their away duck with Villarreal win

© Provided by Independent Online (IOL) Madrid – Barcelona notched their first away win in La Liga this season in Xavi Hernandez’s first away game in charge as late goals ... Read more »

Merry spenny Christmas! How to treat your loved ones responsibly this year with these 10 easy spending hacks

British people spend more on Christmas than most people anywhere else in Europe, with most of us splashing out £300 on gifts alone (and £567 in total), according to Deloitte ... Read more »

Photograph: Mick Tsikas/AAP With the government divided over voter ID, integrity and religious discrimination legislation, the PM announced a bill everyone could get behind Scott Morrison, at the end of ... Read more »

Ricki Lamie says Motherwell have been handed a reality check by Dundee – and that a slow start killed their chances of victory at Dens Park. The Steelmen were swept ... Read more »

Celtic v Hibs: Where else in the football world would a cup final be carved up like this? It's just mean - Aidan Smith

In football, one minute you’re up, the next you’re breaking a tooth on some pie crust. And that’s why we love it, right? © These Hibs fans enjoyed the victory ... Read more »

Matthew Macfadyen has said his wife Keeley Hawes’s Bodyguard sex scenes with Richard Madden hit “a little bit” of a nerve. The Succession actor, 47, met Hawes, 45, on the ... Read more »

Oculus quest 2 Black Friday deals 2021: Get a £50 voucher with the VR headset at Currys

The brand’s latest addition to the VR world is now on offer (The Independent) Now that Black Friday 2021 is upon us, we’re all after the best tech deals, including ... Read more »

Kate Middleton UNPLUGGED: She's one of the most sophisticated women in the world – but even the future Queen Consort lets her hair down sometimes

Blessed with classically beautiful features, a winning smile and those luscious brunette locks, Kate Middleton is certainly one of the most photogenic women in the world. But the Duchess of ... Read more »

Ben Affleck and Jennifer Lopez looked happy in love as they tenderly held hands while arriving to a music studio together in Los Angeles on Friday. As the duo engaged in ... Read more »

Lauren Phillips has quit her job at Channel Nine’s Weekend Today to focus on her radio career. The 34-year-old weather presenter announced she will be leaving the breakfast show on Sunday. Lauren ... Read more »

Samantha Kerr and her U.S. soccer star girlfriend Kristie Mewis have been inseparable since they confirmed their romance in August. And on Sunday, the couple appeared loved-up-as-ever as they headed ... Read more »

Nicole Richie and Joel Madden were seen taking their German Shepherds for a walk in Beverly Hills on Saturday afternoon. The happy couple made the most of the sunny weather ... Read more »

Guatemalan stowaway, 26, is found hiding inside the LANDING GEAR of an American Airlines plane when it arrived in Miami

A Guatemalan man, 26, was found inside the landing gear of an American Airlines plane that landed in Miami on Saturday around 10amHe was turned over to US Customs and Border Protection and taken to the hospital for evaluation The man was trapped inside for two-and-a-half hours from Guatemala to MiamiAccording to the FAA, he is one of 129 people to attempt to stow away in the wheel wells since 1947  Read more »

NEW DELHI (Reuters) – Tim Southee struck twice in three balls as New Zealand blew away India’s top order and reduced them to 84-5 to take charge of the opening ... Read more »

Sharon Stone took a moment on Saturday to thank her mother Dorothy Marie Stone’s nurse for her ‘compassion and nursing skills’ in the days after she suffered a stroke. It ... Read more »

The Observer view on the Omicron variant

Scientists have always warned that the biggest risk to the UK at this stage of the pandemic is the emergence of a more infectious, virulent and vaccine-resistant variant of the ... Read more »

James Van Der Beek and his wife Kimberly celebrated their first Thanksgiving with the newest member of their family, son Jeremiah, who arrived on Planet Earth just last month. The ... Read more »

The Tragedy Of Macbeth: A dagger-wielding Denzel Washington sheds blood in the name of power as Frances McDormand surveys the madness in eerie new teaser

Sinfield: I won't stop until there's a cure for MND