Rachael Lawrence from Essex had lost her cat Barnaby last year when she calledOn the phone with her vet, she heard a familiar meow in the backgroundAfter checking, it turned out it was her lost feline who had turned up at the vets Barnaby was skinny and lost hair but was reunited with a delighted Ms Lawrence

A mother-of-three was reunited with her cat, who had been missing for eight months, after recognising his meow during a phone call.

Rachael Lawrence, of Braintree, Essex, said she ‘recognised’ a meow in the background when she rang the vet to check on her other cat Torvi who was in for a procedure.

The 40-year-old said she asked if it was Torvi meowing but was told, ‘No, that’s just a stray we had brought in a week ago’. 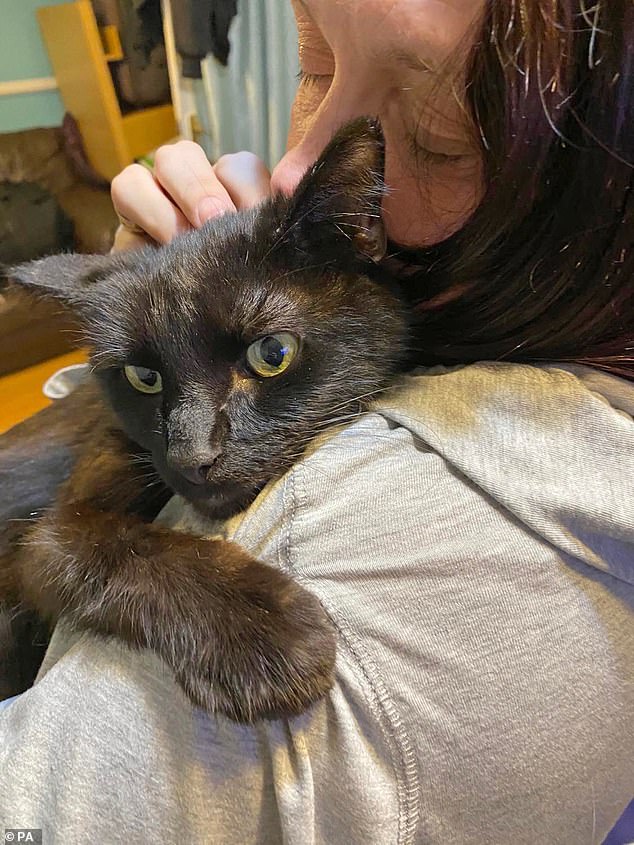 Ms Lawrence said she rang the vet back ‘a couple of hours’ after first hearing the meow, adding: ‘It was just bugging me because I recognised the meow.’

She said she asked if the cat was black and was told yes, then asked if he had a white patch on one of his back feet and was also told yes.

Ms Lawrence brought photos of Barnaby, given the nickname Fatman by his family, when she went to collect Torvi and said she ‘knew it was him’ as soon as they brought him into the room.

‘I cried,’ she said. ‘I’m talking snot bubble cries. I was howling.

‘We hadn’t seen him for eight months.’

She added: ‘He’s back home where he should be. He’s getting on so well.’

Ms Lawrence said Barnaby has ‘loads of scabs and he’s all skinny and missing fur’ – but is ‘more than happy to be picked up and cuddled’.

She added: ‘We just need to fatten him up to get him back to Fatman!’

Ms Lawrence said she had paid to have Barnaby chipped before he went missing but ‘it clearly wasn’t done properly’.