The Channel 5 programme follows Britons who have relocated to popular holiday destinations and reveals how they make a living. Before moving to Spain, Ms Avery was a cabaret singer who had travelled around the world performing.

Her parents moved to Costa-del-Sol when she was eight years old, but she decided to stay in the UK and went to stage school.

However, after her father died, and her mum had a stroke, she had moved to Spain, to help take care of her.

She said: “I was really worried whether I could give her the care she needed.

“I have to get her up in the morning, and then we go through the whole procedure of wash, clothing, tablets, hair brushing, breakfast. I feel like I’m the mother now.

Ms Avery built a new life in Spain, as a carer. Desperate for help, Ms Avery reached out to the British community and help was offered from a local charity. 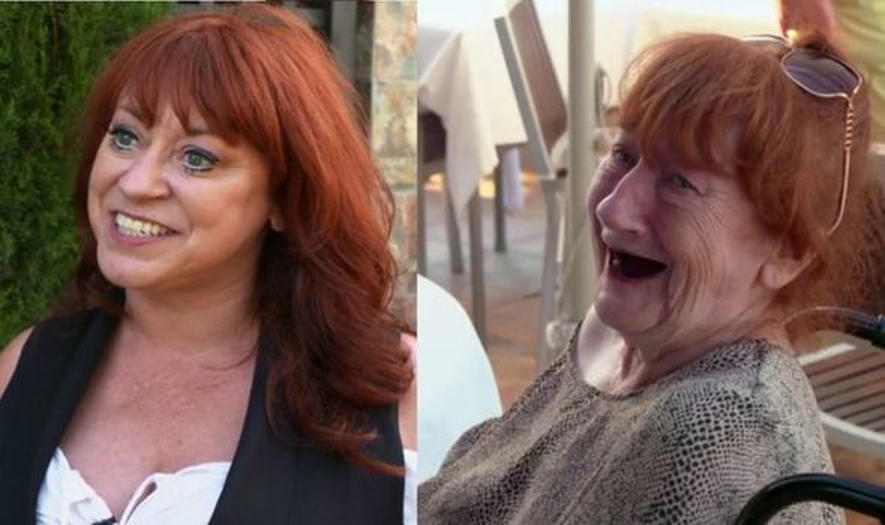 © CHANNEL 5 Bargains Ms Avery said: “We need these charities, we do, because we haven’t got the support of home.”We haven’t got the fabulous NHS.”I don’t know where I’d be without the help, it would be very lonely.”

Once a week, Pam’s carer comes to help Ms Avery with care for two hours. The help provided is free and is offered from a local charity once a week to give primary carers in this situation a break.DON’T MISSGreat news for savers as new bank account offers five percent interest rate [NEW] ‘I now can’t trust anyone…’ Teen left working three jobs after losing £10,600 to scammer [WARNING]‘Just not good enough’ State pension payment delay caused pensioner to blow £3,000 savings [INSIGHT]

During her respite, Ms Avery decided get back into performing.

Ms Avery is part of a performing group called the Pearly Kings and Queens and they have performed together for more than a decade, singing and dancing.

She decided to put on a show to raise to money for the charity that’s helping her care for her mum.

She explained: “The idea is that we’re asking people to buy a ticket to see a show and we want it to be fantastic.” 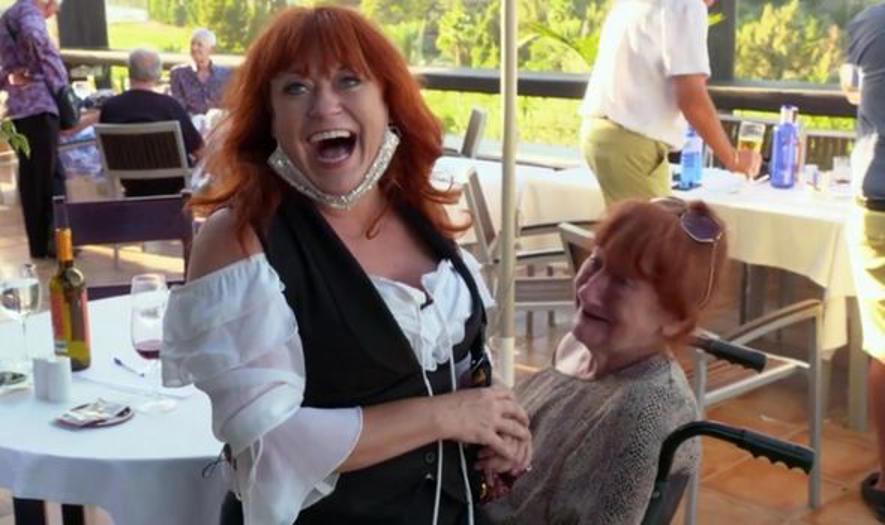 Alex wants to raise enough money to be able to say thank you to the charity for all their support with her mother.

She continued: “So far we have about 16 people, but we need around 60.

“We’re charging 12 euros for tickets, eight is going to the caters and the venue, four is going to Age UK, the charity.

“So, it’s important we get those numbers up and sell those tickets.”

Ms Avery wanted to make £300 minimum for the charity so there was a lot of pressure on for the Pearly Kings and Queens group to put on a good performance.

On the day of the performance Ms Avery was delighted at the fact that over 100 people attended and she was able to surpass her target for £300 going to the charity.

Altogether Ms Avery was able to raise £1030 for the whole day.

She said: “Oh, today really exceeded our expectations. I’m absolutely over the moon.

“They were spending money on helping others so we are now going to help put some money back into their fund so they can continue the good work.”

Be cosy & chic! FEMAIL picks out the best knitwear buys

SNL 'scrambling' to replace Ed Sheeran as he battles COVID-19

Hong Kong is getting its first-ever gay dating TV show, to be hosted by out actor Vinci Wong. Boyscation will air on TVs in early November with Wong as both ... Read more »

India sold more electric vehicles in September than any month previously. Sales have been rising since April – the start of this financial year – and are already nearing the ... Read more »

This fearsome, ancient army was made up entirely of gay lovers and endorsed by Plato

In the fourth century BC, a fearsome army named the Sacred Band of Thebes was formed, and it was made up entirely of gay couples. Lawmakers in countries across the ... Read more »

Covid live: more than 325,000 in England get boosters in one day; Romania to tighten restrictions from Monday

© Photograph: Nick Moore/Alamy A busy hospital in the UK. A medical leader has said A&Es are now in a ‘terrible place’ ahead of winter. LIVE – Updated at 00:05 ... Read more »

© Gerald Graham Gerald Graham/AFP The Canadian coast guard has evacuated 16 people from a burning container ship that is expelling toxic gas off Canada’s Pacific coast, but there is ... Read more »

SINGAPORE — Here is a round-up of sports events and developments in Singapore in the past week (18-24 October): Nazri Nasir names 23 for the AFC U-23 Asian Cup qualifiers ... Read more »

© Mike Marsland/WireImage James Michael Tyler, best known for his role on Friends, died on Sunday. He was 59. The actor died peacefully at his home in Los Angeles after a ... Read more »

© Provided by The Indian Express The Tricity reported four new coronavirus cases on Sunday. No virus-related death was reported. At present, there are 73 active cases of Covid-19 here. ... Read more »

© Provided by The Indian Express SATURDAY WAS observed the coldest October day in the last decade, since 2011, with the maximum temperature set at 19.3 degree Celsius, along with ... Read more »

UP man dies after mistakenly operated on, say officials

© Provided by The Indian Express A 45-year-old man died after authorities at a Bulandshahr medical facility allegedly operated on him after mistaking him for another patient, district officials said ... Read more »

© Provided by The Indian Express Home Minister Amit Shah on Sunday promised equitable development of both the Jammu and Kashmir regions, and said “no one” would be allowed to ... Read more »

With the Coyotes shaking up their roster so much in recent months, there are perceived to be very few untouchables on their roster.  To that end, Sportsnet’s Jeff Marek reported ... Read more »

PORT-AU-PRINCE (Reuters) – Fuel shortages in Haiti are putting the lives of hundreds of women and children at risk as hospitals run low on supplies for electricity, United Nations children’s ... Read more »

Morocco Sufis (Copyright 2021 The Associated Press. All rights reserved.) Followers of a Sufi religious order convened on a Moroccan village near the city of Nador for the birthday of ... Read more »

Lewis Hamilton’s dreams of a record-breaking eighth Formula 1 world championship were dealt a significant blow after he lost further ground in the title race to a triumphant Max Verstappen ... Read more »

© Provided by Daily Mail MailOnline logo Tens of thousands of homes will be built on derelict sites as part of a near-£2billion drive by Rishi Sunak to target brownfield land ... Read more »

"The brain has a backup system": Why people missing much of their brain can miraculously recover

Vanessa Bryant found out about Kobe's death by phone notification

Vanessa Bryant didn’t get word from authorities about husband Kobe Bryant’s death in January 2020 until she’d already received notifications on her phone, she revealed during recent testimony. © Wally ... Read more »

Romantic partner? Who needs one when it's friends who truly help us get through life

Photograph: Peter Cade/Getty Images The importance of romantic love is drummed into us from early childhood. Popular culture and advertising conspire to tell us that there’s one route to a ... Read more »

What's up with that! SNL veteran Jason Sudeikis returns

Jason Sudeikis returned as the Joe Biden of old in the Saturday Night Live cold open tonight, for a skit that played on the current president’s drop in his poll ... Read more »

Ellen got a male-fronted spinoff, Mellen, on Saturday Night Live. Jason Sudeikis skewered Ellen DeGeneres’ show with his own take on the daytime format with its own “hard masculine edge” ... Read more »

Steenhuisen quoted government figures that say 64 municipalities are considered delinquent or dysfunctional, and News24’s Out of Order survey that found 43 more municipalities on the verge of collapse. This ... Read more »

Half of people ‘already planning overseas holidays in 2022'

The Best Games To Play on Your New Nintendo Switch OLED

© Image by SPY.com The Nintendo Switch OLED console is finally here! Unsurprisingly, the price gougers were first in line, and so this new console is really hard to find. ... Read more »

SOCIAL media giants have been warned they'll face new curbs if they don't adopt a “no tolerance approach” to online abuse. Furious Tory MPs have ordered them to enforce compulsory ... Read more »

Joe Judge gave Giants, John Mara another reason to keep believing in him

Joe Judge made Matt Rhule bench his starting quarterback in MetLife Stadium. If the head coach of the Giants wanted to persuade his employers that they picked the right candidate ... Read more »

© Ben Earp / NKP / Motorsport Images Kyle Larson, Hendrick Motorsports, Chevrolet Camaro Tarlton and Son Larson, who dominated much of the race, powered to the lead on a ... Read more »

Dems look to keep tax on billionaires in spending bill

Top Democrats said on Sunday they are eyeing a tax on billionaires to help fund the party’s multi-trillion dollar reconciliation bill, which lawmakers on Capitol Hill hope to advance this ... Read more »

IS claims responsibility for bomb attack in Uganda

Japanese tourism after Covid-19 looks to build on Tokyo Olympics and Paralympics, but some doubt official strategy

World Pasta Day: What Your Fave Pasta Says About You

Qatar frustrated with US slow-walking request to buy drones: report

Activision Blizzard is offering players the chance to change their BattleTags

Virat Kohli: 'They didn't let us come into the game at any stage'

Juliet Stevenson: ‘As an older woman, you feel vulnerable just going on camera'