Nicey's Eatery in Scarborough, Toronto, is searching for the mystery manHe was seen on security footage walking up to the restaurant during a blizzardHe drops to his knees in despair as soon as he realises the restaurant is shutThe restaurant is offering a free meal to the man labelled 'Nicey's Most Wanted'

A restaurant is searching for a mystery customer who was captured falling to his knees in defeat when he discovered the eatery was closed after trudging through a blizzard.

He is seen walking up to the restaurant and dropping to his knees in the thick snow as it suddenly dawns on him that it is closed.

Posting the video onto their Instagram page, the team at Nicey’s Eatery said they were looking for the man and offered him a free meal. 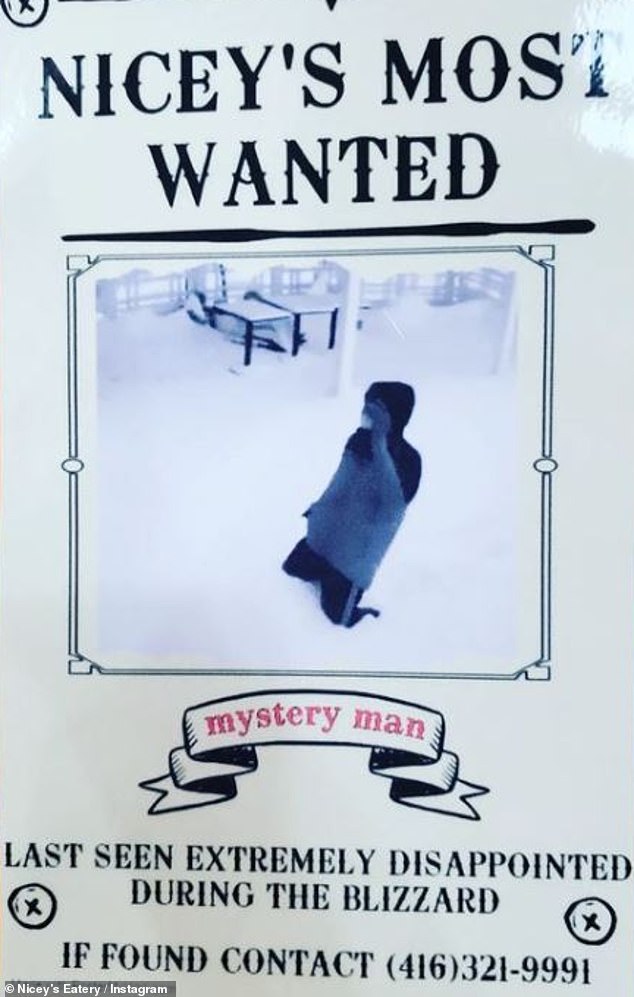 Nicey’s Most Wanted: Nicey’s Eatery, in Scarborough, Toronto, has made an appeal to find the mystery man who is seen walking up to the restaurant and dropping to his knees when he finds it closed 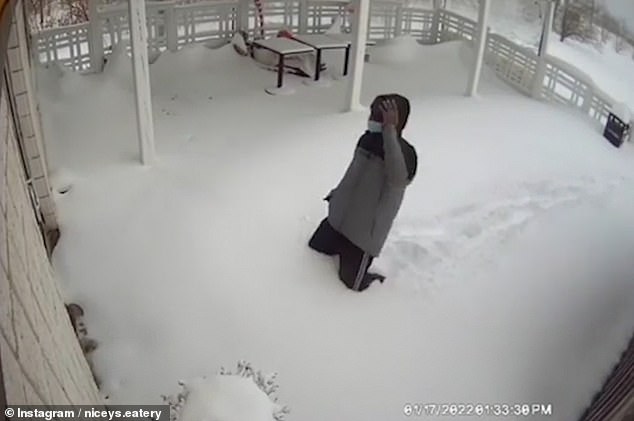 The restaurant posted the clip onto its Instagram page where it has been viewed more than 65,000 times

In the short video clip, the loyal customer – who the restaurant has now nicknamed ‘Nicey’s most wanted’ – is seen wearing a grey and black jacket with the hood up, a facemask and back tracksuit bottoms.

With the snow up to his knees, he trudges his way up to the front of the restaurant.

Just a few feet from the front door it suddenly dawns on him that the restaurant is closed.

He drops to his knees and raises his left hand up to his head in despair.

He remains on his knees with his hands on his hips for a few seconds before struggling out of the snow.

He waves his arms out to the side before making his way back home.

Valerie Lai, the owner of Nicey’s Eatery, said she and her husband, who is from Jamaica, decided to close the restaurant because of the blizzard.

But when they returned the next day they found footprints in the snow and decided to look at the security footage.

There they found the clip of the man trudging through the snow and watched the sudden heartbreak as he finds the restaurant closed.

‘I am in total disbelief that it happened’, Mrs Lai told City News. ‘My heart just went down, I can’t believe that this person actually came. I felt really bad that we were not open for him.’ 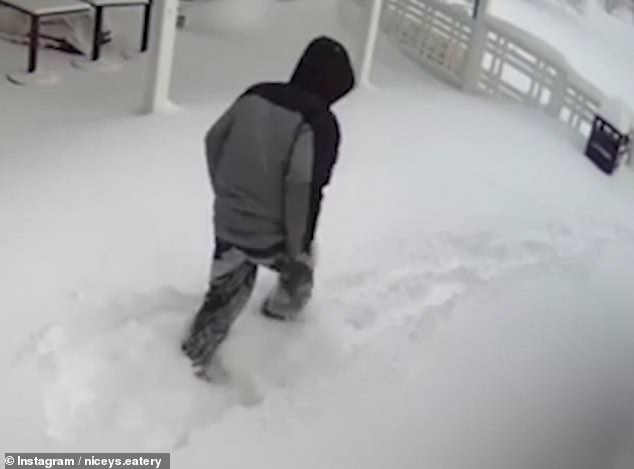 Disappointed, the mystery man gets himself out of the snow and turns to walk away from the restaurant

Nicey’s Eatery posted the video onto their Instagram page where it has been viewed more than 65,000 times, and offered the loyal customer a free meal.

In the post, they said: ‘To our loyal customer, we don’t know who you are but we will be looking out for you.

‘We are terribly sorry the restaurant was closed. We feel your disappointment and hope to see you soon.

‘What ever you had on your mind to purchase today, that meal is on us.’

The video attracted hundreds of comment, including from one user who said: ‘Now I must try your food. If he went that hard for a plate. I must try.’

Another added: ‘I can see his soul crumbling.’

A third said: ‘This is next level disappointment. This goes to show how incredible the food and service is though.’

Nicey’s Eatery are appealing for help tracking down the unknown man, and have issued a ‘most wanted’ poster, adding ‘Where are you Mystery man? You are our angel in disguise who has brought unexpected publicity to our restaurant. Who are you? It’s been a week now, will you be coming to our doorsteps today? We are waiting and really want to meet.’

The man has been described as ‘wearing a grey jacket with dark trim, a mask, black joggers with white stripes and in search of soul food’.