Octopus Energy is exploring a move to take control of Bulb, its rival challenger brand, amid the crisis in Britain’s residential energy market that has triggered a swathe of corporate casualties. 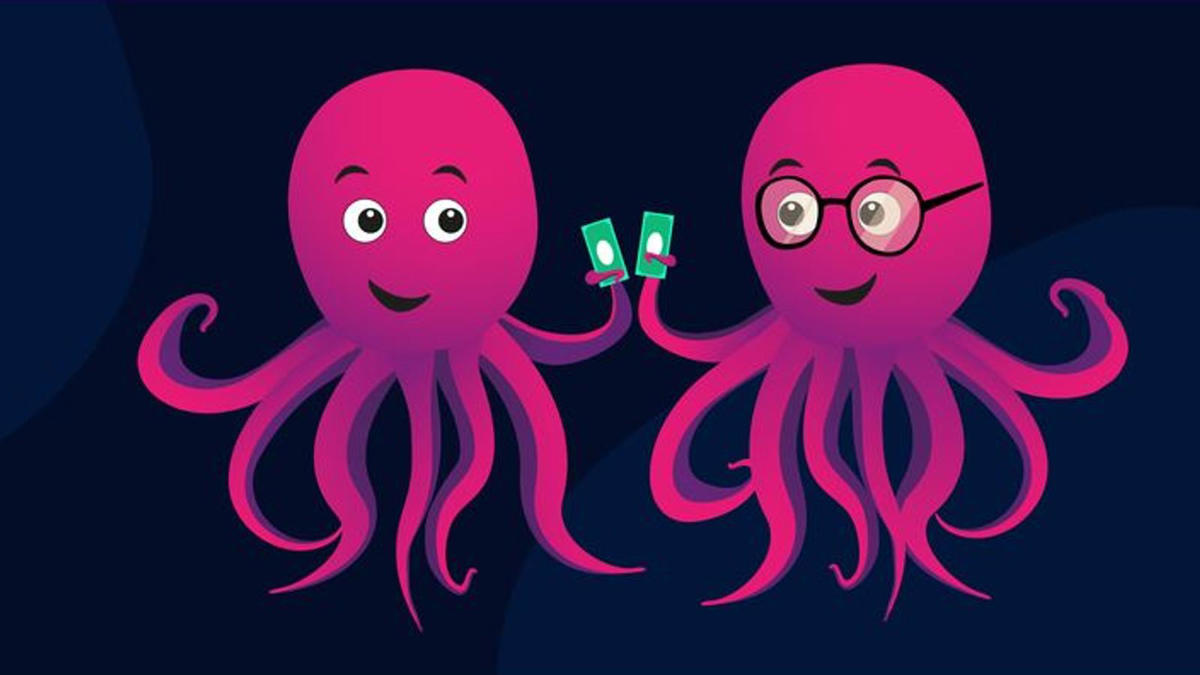 © Other Octopus Energy is exploring a move to take control of Bulb, its rival challenger brand

Sky News has learnt that Octopus Energy is among the parties which have requested access to a data room set up by Bulb’s financial advisers in an attempt to secure new funding during the coming weeks.

This weekend, it was unclear whether Octopus Energy’s interest would extend to mounting a formal bid to acquire Bulb, which has about 1.7 million customers, or whether it was merely exploiting an opportunity to learn more details of a competitor’s financial position.

Octopus is regarded as one of the sector’s best-run and most financially robust companies.

If it did take over Bulb, Octopus Energy would become a serious rival in terms of UK residential customer numbers to the biggest players in the market.

Adding Bulb to its own customer base of more than two million households would create a giant supplier to just under four million British homes.

That would mean Octopus Energy was still the sixth-largest player in the market, but it would be a much closer challenger in size terms to the likes of Ovo Energy and Scottish Power.

Lazard, which is advising Bulb, is understood to be seeking expressions of interest from financial investors within weeks about injecting capital into the company, although the timetable for any strategic bidder is likely to be more flexible, according to an executive at a rival power supplier.

Nevertheless, industry sources said that formidable obstacles remained to any attempt by Octopus Energy to acquire Bulb, not least the requirement to fund working capital and sector-wide renewables schemes in addition to the current financial pressures affecting the market.

Details of the possible structure or value of any transaction are not thought to have been worked out yet, while the names of any other prospective bidders or investors was unclear on Saturday.

Despite media speculation, Bulb is not in the same imminent financial danger as many of the market’s smaller players, and has moved to reassure customers about its status in recent days.

In the past fortnight, half a dozen providers have ceased trading, including Avro Energy, Green, PFP Energy and Utility Point, affecting in aggregate close to 1.5 million households.

The industry regulator, Ofgem, is expected to reassign about 800,000 customers of Avro and Green to larger suppliers in the next few days under a mechanism known as Supplier of Last Resort (SOLR).

Sources said that Ofgem was also talking to restructuring firms about acting as special administrator – effectively temporarily nationalising – any company that is not able to be resolved through the SOLR mechanism.

A spokeswoman for the regulator said: “Ofgem and government prepare for a wide range of scenarios and have long standing contingency plans in place for any situation as needed. These processes include speaking to a range of organisations.”

Combined with the panic buying that has gripped motorists in recent days and the supply chain crises which have left retail chiefs warning of reduced availability of many items in the run-up to Christmas, the energy supply crisis has posed a massive headache for the government.

Ministers have, nevertheless, retreated in recent days from the idea of providing a multibillion pound funding package to subsidise the transfer of customers from failed suppliers.

There are now widespread expectations that the energy price cap, which will rise to £1,309 for prepayment customers at the start of October, will have to be hiked substantially again when it is reviewed next in the spring of 2022.

Octopus Energy was founded little more than five years ago by Greg Jackson, who found himself frustrated by the pricing tactics of existing large players.

The company, which supplies electricity and gas generated entirely from renewable sources to more than two million UK homes, has also expanded into Germany and the US.

Its energy technology – or entech – platform, Kraken, uses advanced data and machine learning to support more than 17 million customer accounts around the world, and has set a target of 100 million accounts on the platform by 2027.

Octopus Energy did not respond to a series of telephoned, texted and emailed requests for comment about the nature of its interest in Bulb.

Mr Jackson tweeted this week that while there were “real issues in energy caused by global gas and shortfalls in UK nukes…the idea of ‘crisis’ is being pumped up by the former Big 6 in order to try to bounce [government] and regulators into restoring the cosy oligopoly they used to enjoy”.

A Bulb spokesperson said: “From time to time we explore various opportunities to fund our business plans and further our mission to lower bills and lower CO2. Like everyone in the industry, we’re monitoring wholesale prices and their impact on our business.”

Bulb, which like Octopus Energy is lossmaking, was established in 2015 and grew rapidly by offering competitively priced deals.

E.ON Next, the new brand which combines customers from E.ON and npower, has around 5.2 million residential customers, while Ovo Energy, which absorbed SSE’s retail customer base nearly two years ago, has 4.5 million.

British Gas, which is owned by Centrica, remains the market leader with seven million customers, and is expected to take on substantially more through the SOLR system between now and the end of the year.

EDF Energy, the French state-owned supplier, and Scottish Power make up the remaining members of the former ‘big six’.

© Image by Alex Castro / The Verge Microsoft is reversing a decision to remove a key feature from its upcoming .NET 6 release, after a public outcry from the ... Read more »

Turkey’s president Recep Tayyip Erdogan has said 10 ambassadors, including those from the US and France, were “persona non grata” after they issued a statement in support of a jailed ... Read more »

James Corden jokes Adele is 'difficult to buy for'

Meghan McCain didn't feel her voice was welcome on The View

Hurricane Rick, which intensified overnight Friday from a tropical storm, is forecast to grow to major hurricane strength upon its expected landfall on Mexico’s southwestern Pacific coast, according to the National ... Read more »

© Provided by Daily Mail MailOnline logo The Buckeye State became the cockeyed state after botching the design of the iconic Wright Brothers plane while rolling out its new license ... Read more »

'Bringing Up Bates' Star Nathan Is Married to Esther Keyes

© Getty Images MaxVerstappen2310A.jpg Max Verstappen moved into pole in a dramatic finish ahead of the United States Grand Prix qualifying. The Dutchman earned his ninth pole of the season ... Read more »

Celtic manager Ange Postecoglou won’t need anyone to tell him that Martin Boyle will be one of the major threats when on Wednesday his team seek to end the club’s ... Read more »

All Blacks pile 104 points on USA in ruthless display

New Zealand got back to their winning ways as they romped to a 104-14 victory over the United States on Saturday in Washington during a test match in which the ... Read more »

Lewis Hamilton admits he was “struggling” in Austin after qualifying second on the grid ahead of the United States Grand Prix, with the seven-time world champion trailing Max Verstappen by ... Read more »

After it was previously rumored that Francis Ngannou would defend his heavyweight championship against interim titleholder Ciryl Gane at UFC 270 on Jan. 22, the promotion confirmed the event during ... Read more »

© Zazzle We independently pick all the products we recommend because we love them and think you will too. If you buy a product from a link on our site, ... Read more »

Illinois finally finished the game that would never end.  It took 60 minutes of regulation, two overtime periods starting at the 25-yard line, and seven periods made up of two-point ... Read more »

The 20 Favorite Tax Havens of the Very Wealthy

Companies and wealthy individuals can legally keep money in tax havens, while avoiding higher taxes at home. And some tax havens are more popular than others. © Mike Coppola/Getty Images ... Read more »

© Provided by GamePur There are plenty of secrets to find in The Dark Pictures Anthology: House of Ashes. In fact, you will be able to find 50 secrets scattered ... Read more »

Ahead of Goa trip, Mamata issues call for parties to unite to take on BJP

© Provided by The Statesman Ahead of Goa trip, Mamata issues call for parties to unite to take on BJP Trinamul Congress chief Mamata Banerjee, prior to her maiden visit ... Read more »

Covid news: NHS doctors warn of looming crisis as PM told to do ‘more than boosters' to avoid lockdown

© PA PA-62475890.jpg LIVE – Updated at 23:01 Doctors, nurses and other NHS staff have spoken out to warn the health service is facing a catastrophe, despite health secretary Sajid ... Read more »

Why Real Housewives Of New York's Eboni K. Williams Thinks She Would Make A Great Permanent Host For The View

© Provided by CinemaBlend screenshot rhny Following Meghan McCain’s departure in July, The View has been filling the post with a circulating slate of temporary co-hosts. Pundits such as Caitlyn ... Read more »

There’s nothing like a Premier League rivalry match with massive stakes. That’s what fans will be treated to when Manchester United hosts Liverpool on Matchday 9 of the English Premier ... Read more »

A beginner's guide to all things COP26

World leaders and negotiators are preparing to head to Glasgow, Scotland for what is expected to be the most ambitious meeting yet, beginning October 31 until November 12. As the ... Read more »

© PA Archive Labour demands inquiry The Government should investigate any possible “cover-up” relating to the murder of a Kenyan woman whose body was found in a septic tank close ... Read more »

What do you get in Treasure Packs in Apex Legends?

When you get into an Apex Legends match, your first instinct after hitting the ground will be to look for weapons and supplies. Though you’ll probably be expecting your weapons of choice ... Read more »

FIFA 22: How to complete UEL Road to the Knockouts Matteo Politano SBC – Requirements and solutions

With EA Sports celebrating the ongoing European club competitions over the past few weeks, we’ve received several new live cards in the form of Road to the Knockouts players. On ... Read more »

HP bypoll | Jai Ram, Pratibha hit out at each other over regional divide

Pablo Escobar's hippos being placed on birth control due to overpopulation

Iowa State ends No. 8 Oklahoma State's undefeated season and stays in the thick of the Big 12 race

After his bribe charge, Malik says all know who was RSS J&K in-charge

Yeh Hai Mohabbatein's Shireen Mirza on her wedding: Grateful that Hasan's everything I wanted in my ‘Mr Right'