Texas Gov. Greg Abbott has bused thousands of migrants to New York since May.

The Humanitarian Emergency Response and Relief Centers will offer aid to individual and family asylum seekers by providing them food, medical care, shelter and casework services, Adams said in a press release. The centers will be the “first touch point” for asylum seekers arriving in the city, the release says.

“More than 100 years ago, Ellis Island opened its doors to welcome in those 'yearning to breathe free.' Now, more than ever, it's clear that we are again dealing with a humanitarian crisis created by human hands. While other leaders have abdicated their moral duty to support arriving asylum seekers, New York City refuses to do so,” Adams said. 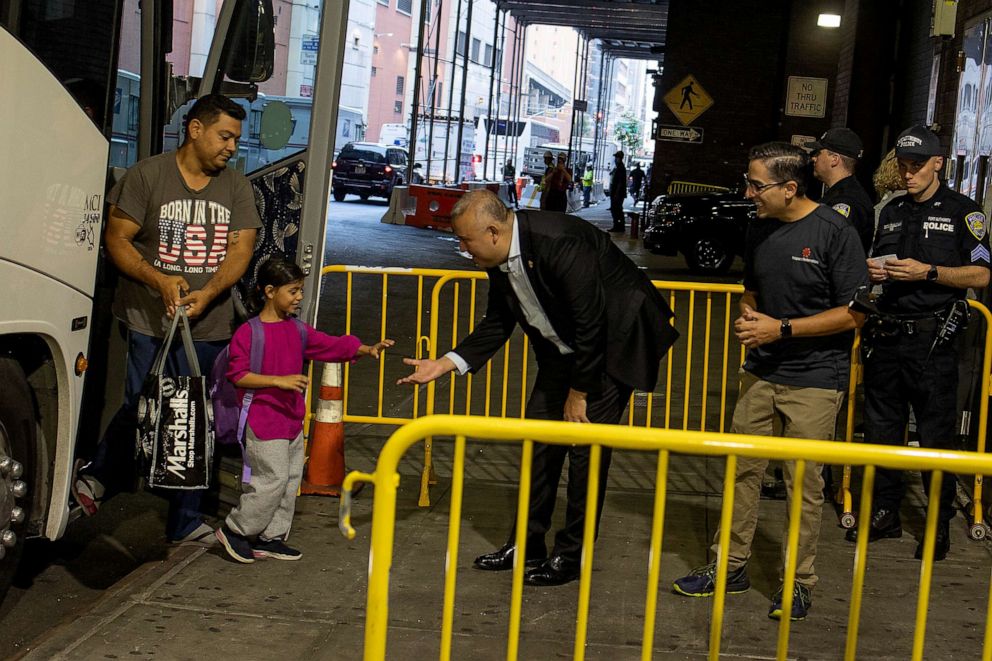 “It's the worst type of politics,” Adams told “Nightline.” “It's hateful politics to raise his national profile and, you know what, you should not be doing it by taking away the respect and dignity of people who are in need.”

The Republican governor defended his policy of sending migrants from the Texas-Mexico border to Democrat-controlled cities, telling Pitts in a “Nightline” interview that Texas must secure its border.

Abbott also criticized Adams, calling him a “hypocrite because New York City is a self-declared 'sanctuary city,'” a city where the local government protects undocumented immigrants from deportation by the federal government. 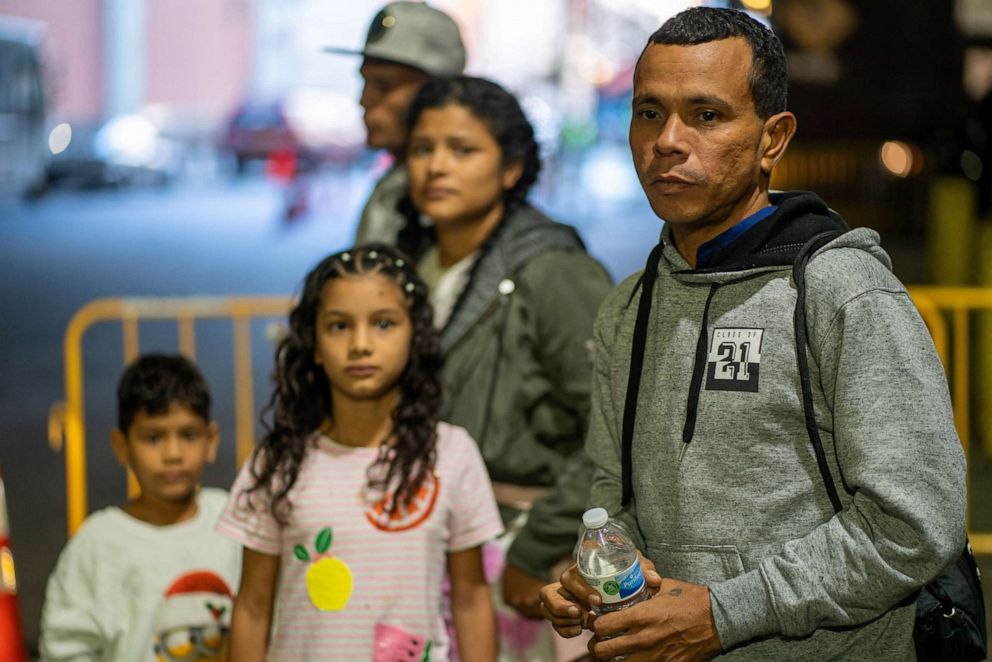 Adams said during a June 21 press conference that the city would find shelter for migrants arriving from Texas under the state's “right to shelter” law.

But as thousands of asylum seekers arrived in New York City over the past couple of months, the shelter system has been strained. 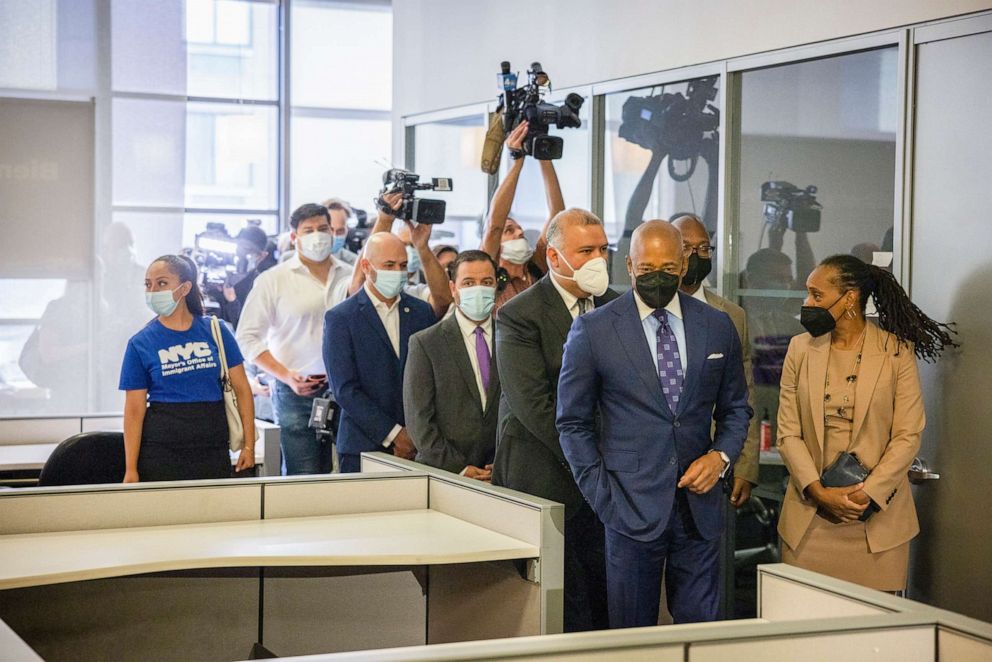 Mayor Eric Adams tours the American Red Cross building, where some asylum seekers will be processed in New York, on Sept. 15, 2022. Adams showed off a new welcome center for the thousands of migrants who are being bused from the border, as evidence of how the city is going above and beyond to “meet its obligation” to house the newcomers. Benjamin Norman/The New York Times via Redux

DeSantis said the move was a message to President Joe Biden and Vice President Kamala Harris to do their “damn job” and secure the border.

The new relief centers will be operated by the New York City Emergency Management agency and NYC Health + Hospitals, which operates the city's public hospitals. Two centers will open in the coming weeks, with more to open as needed, the city said.

“This emergency response represents what we know must be done during this humanitarian crisis, as we continue to seek assistance from our federal and state partners to continue this work,” Adams said in Thursday's press release. “Like the generations that came to our city before, New York will provide the thousands now coming to our city with the foundation to build a better life.”

Did Tom Ellis Really Do His Own Singing On Lucifer?

FootballScoop can confirm that Paul Chryst, who won 72% of his games leading the program, is reportedly out in Madison. During his eighth season in Madison leading the Badgers, Paul ... Read more »

Phil Foden’s hat-trick against Manchester United on Sunday saw him surpass the 50-goal mark under Pep Guardiola – bettering a record set by Lionel Messi. All of the England international’s ... Read more »

Steelers’ Mitchell Trubisky Reacts to Being Benched vs. Jets

After the offense sputtered on Sunday, the quarterback was replaced by rookie Kenny Pickett. Steelers starter Mitchell Trubisky was pulled in the second half of Sunday’s game against the Jets after a poor ... Read more »

Why A Dairy Queen Franchisee Got Slapped With A Sizable Fine

A DQ Blizzard An operator of 11 Dairy Queen franchise locations in Indiana and Michigan has agreed to pay the U.S. Department of Labor (DOL) a fine of $42,572 by ... Read more »

SCOTUS Sackett case: Clean Water Act is on the chopping block The Supreme Court kicks off its 2022 term on Monday with the highly anticipated argument in Sackett v. Environmental ... Read more »

LAUSD confirms that data has been released in cyberattack

'We all have to pull together': Carolinas continue to grapple with Ian's aftermath

Cleanup from the devastation of Hurricane Ian continued across the Carolinas this weekend following its landfall as a Category 1 storm on the South Carolina coast Friday. In the aftermath, ... Read more »

‘In panic mode’: Fear of not enough water, food, gas in Florida’s coastal towns after Ian

A satellite image of Hurricane Orlene on Sunday. The storm could bring flash flooding and landslides across southwest Mexico through Tuesday, forecasters said. Hurricane Orlene, a Category 3 storm, is ... Read more »

HBO Max/YouTube In the current DC Comics landscape, one of its most popular characters came not from the panels of a comic book but from a children’s show. First appearing ... Read more »

From inside the US's most secure prison, 'El Chapo' is pointing fingers at what he says are the real powers in the drug trade

The ball was floating high and far and deep, and many of the 66,578 folks inside Acrisure Stadium surely believed something good had to happen. Good things happen to the ... Read more »

Are Michael Cera And Alia Shawkat From Arrested Development Friends In Real Life?

Featureflash Photo Agency/Shutterstock One of the funniest family dynamics in “Arrested Development” is between George Michael Bluth (Michael Cera) and Maeby Fünke (Alia Shawkat). At the beginning of the series, ... Read more »

By Tom Boggioni Republican candidate for U.S. Senate Herschel Walker speaks to supporters of former President Donald Trump during a rally at the Banks County Dragway on March 26, 2022, ... Read more »

Velus Jones Jr. Will Let Costly Muffed Punt ‘Motivate Him' for Next Time

Philadelphia Eagles show support for Roxborough community on game day: "My heart goes out to them"

PHILADELPHIA (CBS) — The Philadelphia Eagles topped the Jacksonville Jaguars, 29-21, on Sunday to become 4-0 for the first time since 2004. Miles Sanders scored twice and rushed for 134 ... Read more »

Scores of Venezuelan migrants in New York City are hopping on vans to head down to Florida for Hurricane Ian clean-up, they told The Post. The migrants had scant information ... Read more »

Opinion: The Curious Case Of Denis Zakaria At Chelsea

Denis Zakaria failed to make Chelsea’s bench again against Crystal Palace, and there was no apparent injury for the Swiss international. View the original article to see embedded media. Denis ... Read more »

Every Nets player is expected to be available for Monday’s preseason opener except Seth Curry and T.J. Warren. While Curry hasn’t been cleared for full team practices yet, he’s inching ... Read more »

Wisconsin head coach Paul Chryst argues a call during the first quarter of the season-opening game against Illinois State on Saturday, Sept. 3, 2022, at Camp Randall Stadium in Madison. ... Read more »

Fatima Whitbread, 61, battled 'unbearable' pain after breaking three ribs during Celebrity SAS: Who Dares Wins task but fought on as she was determined not to quit the show

Fatima Whitbread fought through 'unbearable' pain after breaking three ribs during a Celebrity SAS: Who Dares Wins taskShe chose not to talk about it as she didn't want to be removed from the Channel 4 showThe former athlete, 61, injured herself when she jumped out of a helicopter into the sea, a challenge which saw TOWIE star Pete Wicks, 33, leave the show after he too cracked his ribs and knocked himself unconscious Sportswoman Fatima, who is the oldest contestant to ever appear on the show, said: 'I can’t tell you the unbearable pain I was going through' Read more »

Emmerdale's Isobel Steele 'has quit the soap after six years to focus on music career... with character Liv Flaherty to be killed off in shocking plot twist'

Isobel Steele has reportedly quit Emmerdale after six years on the show, hoping to focus more on her budding music career than acting. The screen star, 21, has portrayed Liv ... Read more »

Atalanta moved joint top in Italy with a 1-0 win over Fiorentina on Sunday while, at Sassuolo, Maria Sole Ferrieri Caputi became the first woman to referee a Serie A ... Read more »

New York's Four Seasons Hotel is still closed more than a year after other luxury hotels in the city have reopened Owner, Ty Warner, 78, who founded Beanie Babies making his $3.8 billion fortune is in a dispute with Four Seasons over the payment of franchise feesWarner is obliged to pay fees to the chain whether irregardless of whether the hotel makes a profit City records details how the hotel was not making a profit in 2018 and 2019 Warner owns the 54-story building on 57th Street Billionaire's Row in Manhattan but it appears he's comfortable to wait out the dispute that may drag on for years Read more »

Spectator at Steelers Game Dies After Fall From Escalator

Getty Images A spectator at Sunday’s game between the Pittsburgh Steelers and New York Jets died following a fall on an escalator at Acrisure Stadium. The Pittsburgh Department of Public ... Read more »

The Long Beach police SWAT team remained in a standoff Sunday afternoon with a suspected gunman who barricaded himself inside a house after police opened fire on him. The incident ... Read more »

HOUSTON —  Coming off a four-touchdown loss at home, the Chargers on Sunday had given away nearly all of a 20-point lead as the midway mark of the fourth quarter approached. ... Read more »

ATLANTA — In the midst of the most important week of the regular season, the Mets have also been evaluating players for postseason roles. At the start of the week, ... Read more »

As the weather cools down, you may be noticing more spiders appearing in your home, whether you live in a house, apartment or condo. According to Doug Taron, curator of ... Read more »

Apartment 530B is located in the city's Upper Pontalba building on Jackson Square in the famous district and has a market rate of $2,991 per month The city's Metropolitan Crime Commission sent a report to the city council Thursday asking for an investigation into Cantrell's use of the apartment The MCC showed photographs of the mayor entering and leaving the apartment and presented witness testimony that she's been spending nights Both Cantrell and a councilmember who sits on the board for the company managing the apartment say she's done nothing wrong Read more »

How Quickly Can Cubs' Brennen Davis Help Big-League Team in 2023?

Arizona Cardinals guard, and former New York Giant, Will Hernandez was ejected in the fourth quarter of the Cardinals-Panthers game on Sunday. After a James Conner 3-yard rush on first ... Read more »

Aaron Boone took a long pause, the Yankee manager’s exasperation hanging in the air. His team had just finished its final home game of the season with a 3-1 loss ... Read more »

One Household Cavalry solider was found dead in his barracks Wednesday at the age of 18 after he guarded Queen Elizabeth II’s coffin. Jack Burnell-Williams had just walked the Queen’s ... Read more »

In 50 years in politics, I have never seen anything as ugly as this vicious war in the Tory party – only Labour will win

'It’ll be full of sex and drugs and mental illness': Robbie Williams promises his upcoming Netflix documentary will have 'no rules' when it comes to filming

'I was absolutely frightened, it was all so scary and I froze': Woman who was raped repeatedly by Jimmy Savile when she was 15 speaks out as she describes how vile monster groomed and attacked during 1970s then bought her silence with menacing threats