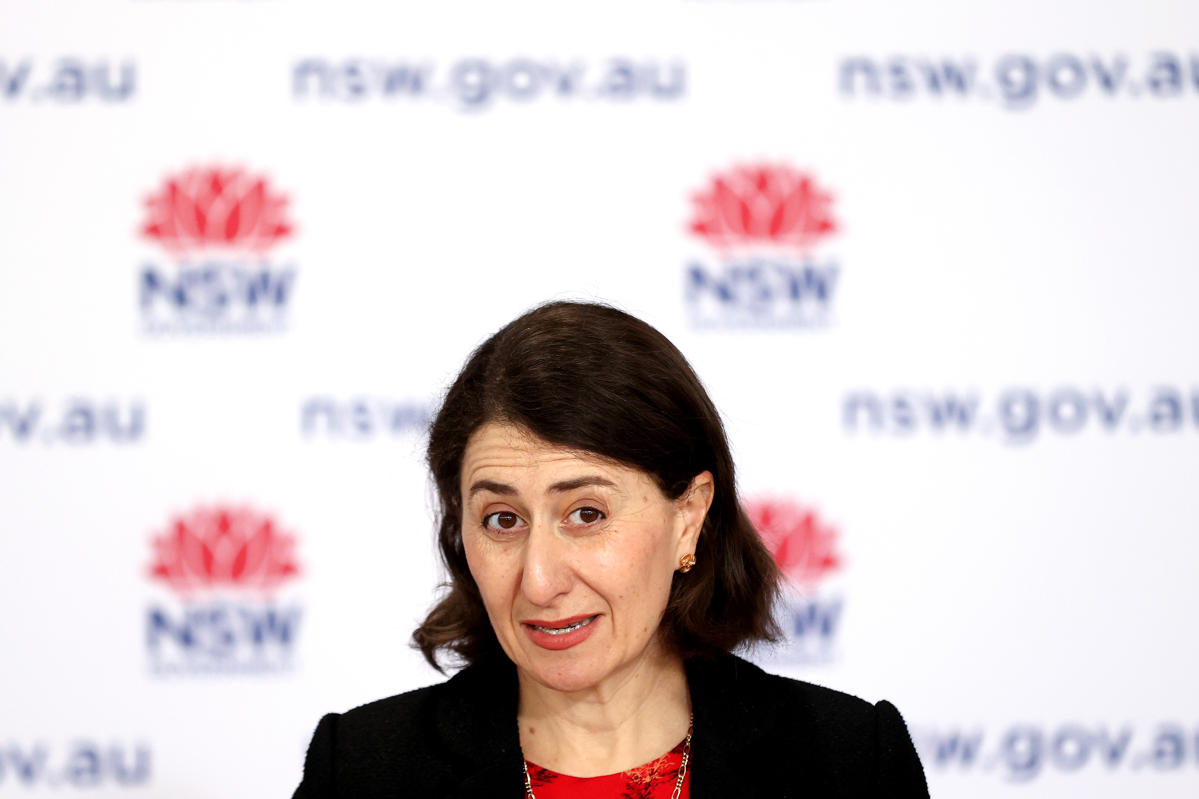 NSW has recorded 1259 new cases of coronavirus and 12 further deaths, a jump in infections from yesterday.

However, the curfew in high-risk Sydney LGAs will be lifted tonight after New South Wales passed the 80 per cent single-dose milestone. Other restrictions will remain.

Despite ending the curfew, Premier Gladys Berejiklian said now was not a time for residents to become complacent.

“We can’t move on anything else just now. We need everybody to hold the line,” Ms Berejiklian said.

“Please make sure that if you live in those local government areas of concern that you stick to every other rule that’s in place.”

“Finally, the Premier has listened to my concerns that the Cumberland community and other LGAs were being unfairly penalised with curfews and stringent lockdowns,” he said.

“I think it’s a poor reflection on the Government that it has taken this long to come to their senses as my community has been collateral damage.”

Cr Christou said people in south-west Sydney had been treated as “second-class citizens” and had suffered a heavy economic and mental health burden.

“I will be meeting with the NSW Treasurer (Dominic) Perrottet this afternoon to discuss how the Government can provide further assistance to our community,” he said.

Ms Berejiklian said 80 per cent of people in the state have now received at least one dose of the coronavirus vaccine.

More than 47.5 percent of people in the state have had both doses.

BREAKING: Curfews in Sydney to end. NSW Police “Operation Stay at Home” to conclude at the end of the month. ADF and police presence to ramp down significantly. @9NewsSyd

“To reach our first dose of 80 per cent is a huge tribute to everybody in the community and some of our communities in western and south-western Sydney have vaccination rates closer to 90 per cent,” she said.

Ms Berejiklian has stressed that once NSW hits a double-dose vaccination rate of 70 per cent, the freedoms given to residents will only apply to those who are fully vaccinated.

“At 70 per cent double dose, you will be required under health orders, to only be able to frequent venues if you’re vaccinated. I want to make that clear,” Ms Berejiklian said.

Ten of the 12 were not vaccinated, and one had only received one dose.

Only a man in his 90s with underlying health conditions died with coronavirus despite having both doses.

Ms Berejiklian has said some communities in the state who are registering lower than average vaccination rates have a choice to receive the jab – but their freedoms will be impacted once the state opens up.

“Obviously, some communities like Byron have a larger percentage of people who choose not to be vaccinated. That’s their choice but they won’t be able to participate in the activities vaccinated people will,” the Premier said.

Ms Berejiklian also signalled that areas with lower than average vaccination rates may not be included in the state’s roadmap of easing lockdowns.

“I foreshadowed the day we announced and released the road map, it could be a situation where if case numbers are too high when we open up the state, that if you live in a community or in a category of person who has high rates of virus, we might have to say to you for the next little while, do all those things that you’re allowed to do but within your local area,” Ms Berejiklian said.

Hospitality venues operators are calling for a public health order to make it clearer about turning away non-vaccinated patrons.

Ms Berejiklian has said the government will provide certainty in the weeks ahead as to what penalties will be given to individuals or businesses who do not check a person’s vaccination status before allowing them entry.

The Premier said the government is currently working through the issue with the business community.

“All of us want to see this process as easy as possible, there is a compliance regime we are going through now to ensure we haven’t left any issues unresolved,” Ms Berejiklian said.

“When I say well ahead, weeks ahead, we can provide that certainty, what the penalties are for individuals purposely defying orders or if a business doesn’t take enough responsibility.”

New modelling from the Burnet Institute released yesterday says tough lockdown rules, and not increasing vaccination rates, had the greatest impact on slowing the spread of the highly contagious Delta variant in hotspot areas.

Young is not currently in lockdown, but authorities are considering whether to introduce new restrictions in the country town.

Meanwhile, a western Sydney aged care home where 19 residents died from coronavirus in the peak of the outbreak last year is in lockdown this morning after a fresh scare.

Newmarch House in Caddens, near Penrith, is on high alert after a doctor, who tested positive to COVID-19, visited the home three times last week.

So far, no residents or staff have been infected with the virus. The majority of those living and working at the Anglicare-owned facility are believed to have been vaccinated.

Newmarch House was one of two major clusters in aged care facilities last year, after an outbreak at the Dorothy Henderson Lodge in Macquarie Park.

The NSW Government is also trialling home quarantine on some double-vaccinated returning travellers.

Seventeen Paralympians are taking part in the 14-day quarantine period inside their homes after exemptions by the state government.

The exemptions were granted due to the athletes having “high care needs, including equipment requirements” according to a statement published in the Sydney Morning Herald.

All Paralympians who competed in Tokyo had to be double-vaccinated before departure, with those quarantining at home undergoing the same COVID-19 testing as those in the hotel system.

It follows the successful trial of a home quarantine app in South Australia with hopes it could be opened up to selected foreign travellers as early as next month.

The program is in its second stage with 90 ADF personnel who returned from various lower risk COVID countries.

RJD, Congress Could Be On a Warpath Or Attempting to Hoodwink Nitish Kumar Ahead of Bypolls

TV tonight: Joe Lycett takes on the oil giants with a viral stunt

SPOT.ph Roadtest: Is the New Fitbit Luxe Worth the Price Tag?

Bitcoin is the new GOLD - $100,000 crypto is haven from inflation and stock market crash

The latest Bitcoin resurgence has seen its value has double since it slumped to around $30,000 just three months ago, in mid-July. Many investors will be kicking themselves for missing ... Read more »

© Provided by Preview.ph When thinking of oils in the beauty scene, makeup remover, face oils, or even hair oils would probably be the first few things that come to ... Read more »

10 Wholesome K-Dramas to Stream, According to Running Time

Colombia’s most-wanted drug lord has been captured by authorities in what has been heralded as the biggest blow to the country’s narcotics traffickers in decades. © Colombia Presidents Office Dairo ... Read more »

The Station nightclub fire: What happened and who's to blame?

NEW DELHI: After scaling new lifetime highs the benchmark BSE Sensex and Nifty50 indices shed 1,500 and 500 points in the week gone by as second quarter results failed to ... Read more »

A shooting Saturday evening during homecoming weekend at Morgan State University in Baltimore has left at least one student wounded, according to reports. The student was identified only as an ... Read more »

New Delhi: India continues to remain a high cost environment for airlines to operate in and it is critical to empower the Airports Economic Regulatory Authority (AERA) further to safeguard ... Read more »

© Provided by Zee News Gosaba: TMC national general secretary Abhishek Banerjee on Saturday claimed that voting for the Congress and Left Front would be in no way different from ... Read more »

© Provided by The Statesman Bangladesh violence: ISKCON devotees hold protest in Bengaluru Followers of the International Society for Krishna Consciousness (ISKCON) held a peaceful march on Saturday in the ... Read more »

© Provided by Pinkvilla Emily Ratajkowski announced the birth of her first child with husband Sebastian Bear-McClard in March this year. On October 1, the model revealed the face of ... Read more »

© IANS Ed Sheeran.(photo:Instagram) Los Angeles, Oct 24 (IANS) Grammy winning-singer Ed Sheeran is hoping his new storytelling appearance will help children, like him, who are growing up with stutters. ... Read more »

A NEW mum has revealed how she was mum-shamed for putting in some firm baby rules after her little one arrived.  TikTok user Charli Clelland, who posts under @charliclellandxx, uploaded ... Read more »

© Provided by News18 Happy Birthday, Wriddhiman Saha: Top Performances of the Wicketkeeper-batter India’s veteran wicketkeeper-batsman Wridhimman Saha has earned more fame as a wicketkeeper than a batter in the ... Read more »

The Prime Minister and senior health chiefs are calling on the nation to get vaccinated against Covid-19 amid mounting concern over rising infection levels ahead of Christmas. Boris Johnson said ... Read more »

© Provided by People Rosalind O’Connor/NBC/NBCU Photo Bank via Getty Jason Sudeikis is back in Studio 8H for Saturday Night Live! The 46-year-old SNL alum, who was a cast member ... Read more »

TNT goes for 3-0 lead against Magnolia in PBA finals

© Provided by SPIN.ph A COMMANDING 3-0 lead is what TNT is aiming for in its clash with Magnolia Pambansang Manok on Sunday in the 2021 PBA Philippine Cup finals ... Read more »

Cop26 climate deal will be harder than Paris accord, admits Sharma

Achieving a global climate deal in Glasgow in the next three weeks will be harder than signing the Paris agreement of 2015, the UK president-designate of the Cop26 talks has ... Read more »

SEOUL: The US on Sunday urged North Korea to stop “counterproductive” missile tests, but expressed hope Pyongyang would respond positively to Washington’s call for dialogue. It comes after North Korea ... Read more »

An Ecuadorian Olympic sprint star who became a national hero at London 2012 has been fatally shot in his home city of Guayanquil, police say. © Reuters Alex Quinonez became ... Read more »

Light rains likely to occur in parts of UP, Haryana

What Congress can learn from the fight over Obamacare

A Democratic president elected with his party in control of Congress. House Speaker Nancy Pelosi putting the squeeze on her “moderate” members. So-called centrist Democratic senators sweating the fallout of ... Read more »

Former President Donald Trump has given every indication he is running for president again short of formally announcing it, and the party is lining up dutifully behind him. While this ... Read more »

For three of the past six years, Kristin Lammert has spent August 25 in a delivery room. © Courtesy Kristin Bonett Lammert She calls herself a planner, but nothing could ... Read more »

'It still haunts me': Toxic cooking oil scandal hangs over Spain 40 years on

Duchess of Cornwall on mother's osteoporosis: ‘If you don't take care, that's what will happen to you'

Alec Baldwin shooting: what happened on the set of the movie 'Rust'?

In pictures: 15 finalists for Miss Universe UAE have been unveiled