Novak Djokovic has been tipped to become as adored as his long-time rivals, Roger Federer and Rafael Nadal. While the world No 1 is respected as one of the greatest players in the game, he has often not had the crowds on his side at events and has not had the level of admiration that Federer and Nadal experienced. However, one of Djokovic’s former coaches now believes the Serb will be “loved” as he reaches the latter years of his career.

Djokovic has been the most successful player of the trio in recent years, catching up to Federer and Nadal by reaching 20 Grand Slams this year, having won the Australian Open, Roland Garros and Wimbledon.

However, the world No 1 has not experienced the same level of love and admiration from crowds as his Big Three counterparts.

Some believe it is a matter of who got there first, with Federer and Nadal having their career breakthroughs shortly before Djokovic arrived on the scene, as the Serb came from behind to catch up to the two men originally seen as the ‘GOATs’.

Although the Serb has not always received a warm reception, one of his former coaches now believes Djokovic will get the love and support he has arguably always deserved, as he reaches the final few years of his career.

JUST IN: Murray maps rest of season as he makes another Davis Cup U-turn 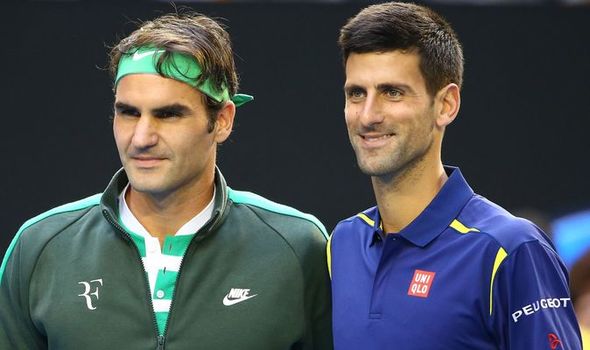 © Getty Novak Djokovic will be

Djokovic, now 34, has been the only member of the Big Three on tour in recent months.

Federer underwent two knee surgeries in 2020, shutting down his season after the Australian Open and ended his 2021 season after playing just five tournaments, having his third surgery in 18 months.

Meanwhile, Nadal played just two matches at the ATP 500 in Washington after aggravating a left foot injury during his semi-final loss to Djokovic at Roland Garros, and joined his Swiss rival in ending his season early to recover.

It left Djokovic as the only Big Three player competing in the season-ending Grand Slam in New York last month, and the top seed experienced one of the most supportive crowds of his career in the US Open final.

Emma Raducanu vs Ana Bogdan live stream: How to watch US Open champ

Now, six-time Grand Slam champion Boris Becker – who coached Djokovic for several years – believes his former protégé will join Federer and Nadal in receiving admiration from crowds, after he received an ovation despite losing the US Open final to Daniil Medvedev last month.

“The incredible ovation he received during the final was very good for him,” the former world No 1 said. “That ovation should make it very clear that Novak is on the way to being loved in the final stretch of his career.

“Respect for his incredible performances has always been there, but now people attach themselves with him emotionally.” 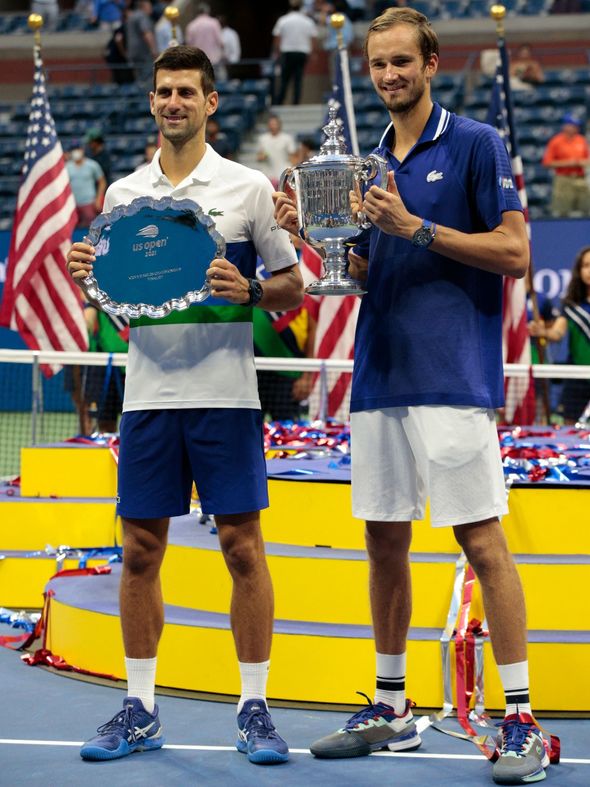 Becker also spoke of the disappointment Djokovic would have felt after missing out on the Calendar Grand Slam.

The 34-year-old would’ve been the first man in 52 years to win all four Majors in a single year, and the first man in history to win a record 21st Grand Slam singles title, but fell at the final hurdle as he lost to Medvedev in the US Open championship match.

He has not played since, but will be making a return at next week’s Paris Masters 1000, before ending his season with the ATP Finals and Davis Cup.

“Novak is still digesting the tremendous opportunity he could not take advantage of in the last US Open,” his former coach added.

“It became a major emotional problem for him, things did not go as expected.

“I hope he plays again soon. I think he will see everything more clearly again once he gets back into dynamics, plays tournaments and wins matches again.”

Kareena Kapoor Khan goofs around with the paps as she hides her face with a jacket; PIC

Kangana Ranaut all set to take PANGA with Karan Johar once again; Tejas to clash with Mr. & Mrs. Mahi

Abhishek Kapoor recaps his cinematic journey: ‘What your failure teaches you, your successes will never teach you'

Katrina Kaif and Vicky Kaushal's wedding today. What we know so far

Mackenzie Blackwood made 25 saves and the New Jersey Devils snapped a four-game skid and sent the reeling Philadelphia Flyers to their 10th straight loss, 3-0 on Wednesday night at ... Read more »

Rep. Tom Suozzi says he doesn’t care if “the cost of products go up,” after the ban on labor-made Chinese products. AFP via Getty Images The House of Representatives passed ... Read more »

© Provided by CinemaBlend The main cast of Outer Banks. Just in time for the holidays, Netflix has renewed anotherone of its popular original series! Recently, the streamer announced that ... Read more »

Tanáiste Leo Varadkar has said he has “no advice” to offer British Prime Minister Boris Johnson over reports that a Christmas bash took place at Downing Street. Boris Johnson has ... Read more »

© Provided by WhatToWatch Catch up with Miranda, Carrie and Charlotte. On TV tonight, here come the girls as And Just Like That, the sequel to Sex and the City ... Read more »

Barcelona midfielder Sergio Busquets is reportedly considering whether to reunite with former boss Pep Guardiola and move to Manchester City at the end of the season. City face the prospect ... Read more »

Voting systems company Smartmatic wants MyPillow CEO Mike Lindell's lawsuit dismissed, and accuses him of going on a 'crusade without a claim' by suing them for suppressing free speech

© Provided by Zee News New Delhi: The Central Board of Secondary Education (CBSE) has made a big announcement regarding the registration of students for classes IX and X for ... Read more »

© Provided by The Print After a very long time, television news was sober—barring the anchor on ABP News who was punch drunk on her own adrenalin, unable to contain ... Read more »

Chief executive officer of Better.com Vishal Garg has apologised for the way in which he handled the recent mass layoff at the US-based online mortgage firm. Garg had received severe ... Read more »

What is ETH/BTC pair and why did it rise amid crypto crash last week?

© Provided by CNBCTV18 Even as Bitcoin crashed last week pulling the crypto market lower, the ether-bitcoin (ETH/BTC) ratio rose by nearly 13 percent hitting an over three-year high. This ... Read more »

© Provided by Mid-Day Hyderabad FC rode on Bartholomew Ogbeche’s first-half strike to down Bengaluru FC 1-0 in an Indian Super League tie at the Athletic Stadium in Bambolim on ... Read more »

Downing Street has been accused of holding a Christmas party at No10 last December, while London was under Tier 3 lockdown rules that prevented indoor social gatherings of any size. ... Read more »

Spread of the coronavirus disease (COVID-19) in Cuba HAVANA (Reuters) -Cuba has detected its first case of the Omicron coronavirus variant in a person who had traveled from Mozambique, Cuban ... Read more »

From private sector to public holidays: questions about the new UAE weekend answered

© Provided by The National Residents gather at the Corniche in Abu Dhabi to celebrate the UAE’s 50th National Day on December 2. From January 1, the country will adopt ... Read more »

© Provided by Geek Culture Chris Pratt (Guardians of the Galaxy) has taken on a couple of roles that surprised many and left them confused. Namely, Pratt will be voicing ... Read more »

© AFP PHOTO/Ted Aljibe (file photo) A general shot of downtown and the coastline of Tacloban City, Leyte on November 2, 2015. Due to continuous rains, the Tacloban City government ... Read more »

Updated at 12:15 am IN a bid to provide Filipinos access to affordable quality medicines, President Rodrigo Duterte has signed an executive order (EO) that will regulate the prices of ... Read more »

Bipin and I: We Were Married Officers Staying Single and Had Heated Debates during Walks

© Provided by News18 Bipin and I: We Were Married Officers Staying Single and Had Heated Debates during Walks General Bipin Rawat was one of the most outstanding officers of ... Read more »

Iulia Vantur to host Salman Khan`s docu-series `Beyond The Stars`?

© Provided by Mid-Day Anyone who knows Iulia Vantur as a celebrity or a friend, surely knows that she is a talented host, anchor, actress, model & dancer all in ... Read more »

Dec. 8—Flathead County authorities are investigating the death of a person found inside a burned camper trailer on Blacktail Mountain. According to Sheriff Brian Heino, a call came in at ... Read more »

© Provided by Zee News Geneva: Certain features of the Omicron variant, including its global spread and large number of mutations, suggest it could have a major impact on the ... Read more »

© Provided by Zee News New Delhi: The Samyukta Kisan Morcha (SKM) is likely to call off their 14-month agitation on Thursday (December 9, 2021) at 12 pm, after receiving ... Read more »

The Odisha civil services main exam 2020 will be held from January 20 to February 6, except January 26 and February 5, the Odisha Public Service Commission (OPSC) said on ... Read more »

Barcelona crashed out of the Champions League following a 3-0 defeat at Bayern Munich Second-string Manchester United were held to a 1-1 draw with Switzerland’s Young Boys, Barcelona’s 17-year streak ... Read more »

Susan Kelechi Watson on ‘This Is Us' Final Season: “It's Been a Lightening in a Bottle” | Women in Entertainment 2021

Analysis: Did the press overhype the danger posed by the Omicron variant?

A version of this article first appeared in the “Reliable Sources” newsletter. You can sign up for free right here. © Yuki Iwamura/AP A sign of COVID-19 testing site is ... Read more »

The EU will propose a set of criteria on Thursday to determine whether a gig worker in Europe using platforms like Uber, Bolt or Deliveroo should be considered an employee. ... Read more »

© Provided by Dot Esports Halo Infinite just launched its Campaign and players aren’t only getting a huge Halo story to take in but also some extra bonuses for use ... Read more »

A century later, Neral-Matheran railway line to be rebuilt

‘One rule for them': newspapers savage Boris Johnson over party scandal

Even amid boycott, IOC still hit with Peng Shuai questions