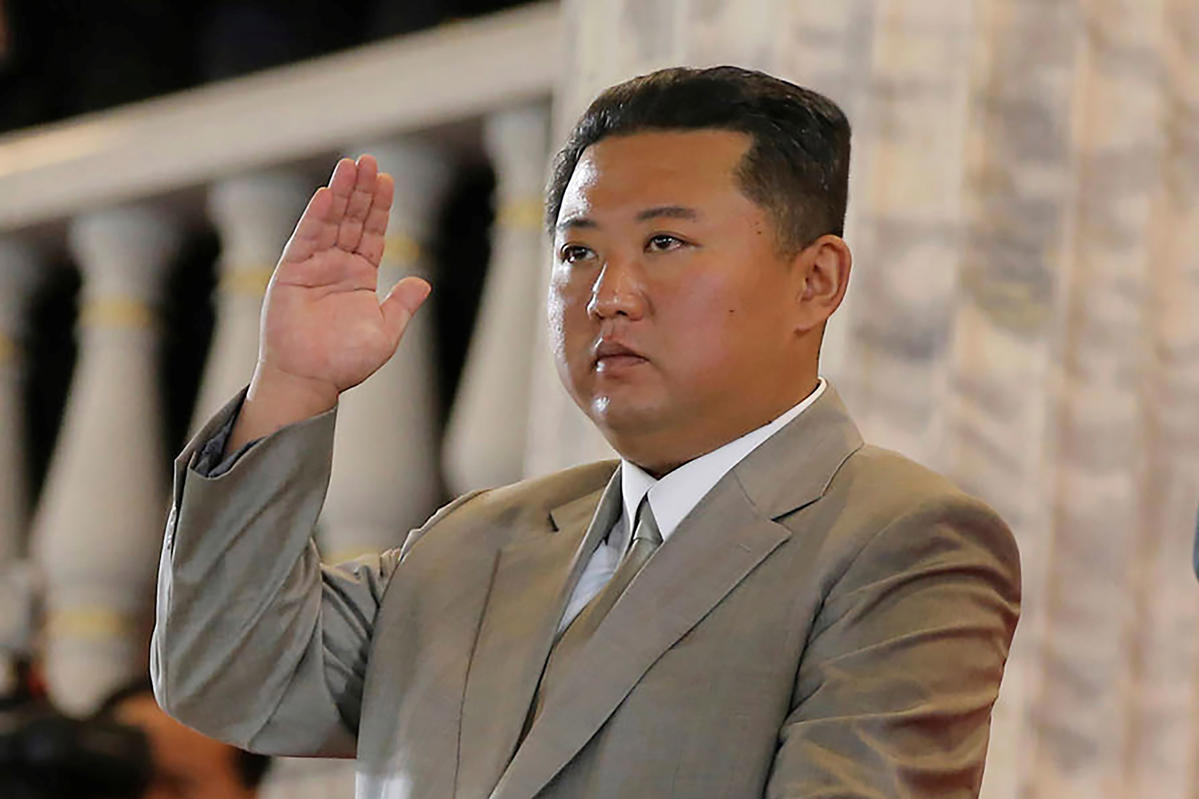 © Associated Press North Korea says the AUKUS pact could upset the strategic balance in the Indo-Pacific.

North Korea has slammed a new security pact between Australia, the US and the UK as “extremely undesirable and dangerous”, warning it could trigger a “nuclear arms race” in the region.

Under the defence pact announced last week, known as AUKUS, the US will supply Australia with nuclear submarines, adding Australia to a small group of countries equipped with that military capability.

“These are extremely undesirable and dangerous acts which will upset the strategic balance in the Asia-Pacific region and trigger off a chain of nuclear arms race,” an unidentified foreign ministry official told North Korea’s official Korean Central News Agency (KCNA).

The official said North Korea was closely examining the deal and would proceed with “corresponding counteraction” if it has “even the smallest negative effect on our country’s safety”.

US President Joe Biden revealed last week that the US would deliver a fleet of at least eight nuclear-powered submarines to the Royal Australian Navy.

Mr Biden stressed the submarines would be conventionally armed and will not be equipped with nuclear weapons.

Prime Minister Scott Morrison blamed the switch on a deteriorating strategic environment in the Indo-Pacific, a clear reference to China’s massive military build-up that has gained pace in recent years.

Allies and enemies upset by AUKUS

The official said North Korea supports the views of China and other countries that the deal would destroy “regional peace and security and the international non-proliferation system and intensify arms races”.

“The current situation shows once again that [our] efforts to bolster national defence capabilities based on long-term perspectives should not be eased by even a bit,” the official told KCNA.

The announcement triggered an angry reaction from France, which accused Australia of concealing its intentions to back out of a $90 billion contract for French majority state-owned Naval Group to build 12 conventional diesel-electric submarines.

France recalled its ambassadors to both Australia and the US as a result of the pact.

The North Korean official made an apparent reference to the French complaints, saying that the United States was being accused of back-stabbing even by its allies.

“The US double-dealing attitude … erodes the universally accepted international norm and order and seriously threatens the world peace and stability,” the spokesman said.

North Korea back to testing missiles

North Korea has not conducted a nuclear test since 2017 and suspended testing of intercontinental-range ballistic missiles that could hit the US mainland in 2018, when leader Kim Jong Un initiated diplomacy with former President Donald Trump.

Nuclear negotiations between Washington and Pyongyang have stalled since the collapse of a second Trump-Kim meeting in 2019, when the Americans rejected North Korean demands for major sanctions relief in exchange for dismantling an ageing nuclear facility.

While maintaining its self-imposed moratorium on nuclear and intercontinental ballistic missile tests, North Korea has continued testing shorter-range weapons threatening US allies South Korea and Japan in an apparent effort to pressure the Biden administration over the stalled diplomacy.

North Korea this month tested a new cruise missile it intends to eventually arm with nuclear warheads and demonstrated a new system for launching ballistic missiles from trains.

For Aahana Kumra, 'Call My Agent: Bollywood' is about memorable experiences

Why Biden's flailing: It's the economy, stupid

Turkey moves to throw out US and other envoys

Turkey’s President Recep Tayyip Erdogan says he has ordered 10 ambassadors, including those from the US and France be declared “persona non grata”. © AFP Osman Kavala has spent more ... Read more »

Obama hits the stump in US battleground Virginia

Former US president Barack Obama was due to campaign Saturday in a neck-and-neck state election touted as a bellwether of public opinion on Joe Biden’s first year in the White ... Read more »

UAE: Stray cats get their own feeding stations in Abu Dhabi

© Provided by Khaleej Times UAE: Stray cats get their own feeding stations in Abu Dhabi Abu Dhabi is an emirate of animal lovers. It houses a pet-friendly hotel, a ... Read more »

Ben Simmons was supposed to be the NBA's next superstar. His promising future with the 76ers crumbled under failed shooting and trade demands.

Giorgio Armani promises 'green' One Night Only in Dubai

© Provided by Khaleej Times Giorgio Armani promises ‘green’ One Night Only in Dubai Giorgio Armani is arriving in the City of Gold. On Tuesday, the legendary designer will stage ... Read more »

Malaika Arora gives quirky reaction to Arjun Kapoor's birthday wish for her; Ranveer is all hearts for them

Arjun Kapoor and Malaika Arora have been one of the most talked about couples in tinselvile and they have never missed a chance to win hearts with their sizzling chemistry. ... Read more »

© Provided by MensXP The internet has been buzzing with excitement ever since YRF’s social media handles revealed two stills from Bunty Aur Babli 2. With Rani Mukerji stepping back ... Read more »

'Bigg Boss 15' to see Simba, Umar slug it out in the 'Sultani Akhaada'

Expats beware! The 10 WORST destinations to relocate in 2021 according to experts

From work to family, marriage to new opportunities, Britons choose to relocate overseas for a number of reasons. The good news is, there are many countries offering opportunities that the ... Read more »

© Provided by Evoke.ie Bridgerton newcomer Simone Ashley, who is set to make her debut as the leading lady in season two of the regency drama, has opened up about ... Read more »

'Robbery every game', 'Having a stinker' - Many Leeds fans slam 'absolute nightmare' vs Wolves

Lots of Leeds fans have taken to Twitter to slam Jack Harrison’s  display against Wolves in the Premier League. © Provided by This is Futbol Jack Harrison Trailing at half-time, ... Read more »

Norris reacts to being voted the ladies' favourite driver

Lando Norris is happy to have been the ladies’ choice in F1’s biggest ever fans’ survey – especially if he can help them towards a career in the sport. © ... Read more »

'Absolutely sums up Angeball', 'Just what we wanted to see' - Many Celtic fans hail 'great' news

Plenty of Celtic fans were quick to offer their thoughts on social media as they flooded Twitter in the wake of the first half of the Bhoys’ Premiership game against ... Read more »

'Is it possible to sack a stand in manager?' - Many Newcastle fans react to 'horrible' news

Plenty of Newcastle fans were quick to offer their thoughts ion social media as they flooded Twitter in the wake of the first half of Newcastle’s game against Crystal Palace. ... Read more »

A Minnesota politician has promoted a fundraiser for several constituents who are charged with participation in the deadly 6 January attack on the US Capitol, saying they come from a ... Read more »

Erdogan orders removal of 10 ambassadors, including US envoy

ISTANBUL (AP) — Turkish President Recep Tayyip Erdogan said Saturday that he had ordered 10 foreign ambassadors who called for the release of a jailed philanthropist to be declared persona ... Read more »

© Russian Defense Ministry/Reuters A group of naval vessels from Russia and China conduct a joint maritime military patrol in the waters of the Pacific Ocean, in this still image ... Read more »

South African captain Temba Bavuma was disappointed with his team’s batting performance after their 5-wicket defeat in the opening game of the ICC T20 World Cup Super 12s which got ... Read more »

© Provided by Firstpost T20 World Cup 2021: India look to make winning statement against arch-rivals Pakistan Virat Kohli will step down as India captain in the shortest format of ... Read more »

One dead, 8 wounded in shooting near Fort Valley State University during homecoming weekend

Why did the Kings bench Marvin Bagley? Former No. 2 pick falls out of rotation

Alec Baldwin shooting: 24-year-old armourer on film set 'wasn't sure' if she was ready for role