North Korea has launched two tactical guided missiles in its fourth sanctions-busting test of the year.

The missiles ‘precisely hit an island target in the East Sea of Korea’ in the test carried out on Monday, state news agency KCNA announced.

The launches ‘confirmed the accuracy, security and efficiency of the operation of the weapon system under production,’ it added.

North Korea has launched two tactical guided missiles in its fourth sanctions-busting test of the year (pictured, the latest launch on Monday

Since leader Kim Jong Un avowed his commitment to military modernisation at a key party speech last month, the nuclear-armed country has conducted a string of weapons tests, including of hypersonic missiles.

Washington hit Pyongyang with fresh sanctions last week and North Korea responded by doubling down on testing, asserting its ‘legitimate right’ to self-defence.

The launches come at a delicate time in the region, with North Korea’s sole major ally China set to host the Winter Olympics next month and South Korea gearing up for a presidential election in March.

Pyongyang is using the new US sanctions as an excuse to proceed with pre-planned conventional weapons tests, an analyst said, as the North seeks to narrow the gap with South Korea’s well-equipped military. 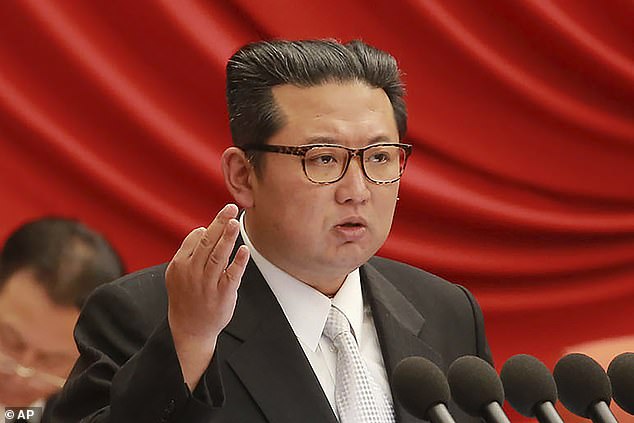 ‘It lags far behind on that point in its rivalry with Seoul,’ said Cheong Seong-chang of the Center for North Korea Studies at the Sejong Institute.

‘Though it is nuclear-armed, it is not in a position to use them unless it’s attacked first and it can only use conventional weapons for possible military conflict along the border areas.’

For now, talks with the United States are ‘off the table’ as Pyongyang won’t respond until Seoul and Washington freeze joint drills – something Washington has said is not up for negotiation, he added.

The United States called on North Korea Monday to ‘cease its unlawful and destabilizing activities’.

The US special representative on North Korea, Sung Kim, ‘expressed concern’ about the missile launches and urged Pyongyang to return to dialogue ‘without preconditions’, the State Department said.

Even as it flexes its military muscles, the impoverished country, reeling economically from a self-imposed coronavirus blockade, quietly restarted cross-border trade with China this weekend.

A freight train from North Korea arrived at the Chinese border city of Dandong for the first time since early 2020 on Sunday.

‘Freight trains carrying goods between Dandong and the DPRK have resumed operation. This work will be conducted in accordance with pandemic prevention measures,’ Chinese foreign ministry spokesman Zhao Lijian said at a routine briefing Monday.