With the injuries that the New York Giants have carried over the past few weeks, first round selection Kadarius Toney has made the most of his opportunity, and scored two touchdowns to become one of the potential NFL DFS picks for Week 6. Kahlil Herbert and Damien Williams combined for 139 rushing yards for the Bears with David Montgomery on the shelf last week. With Williams now out with COVID-19, should Herbert be part of your NFL DFS stacks? 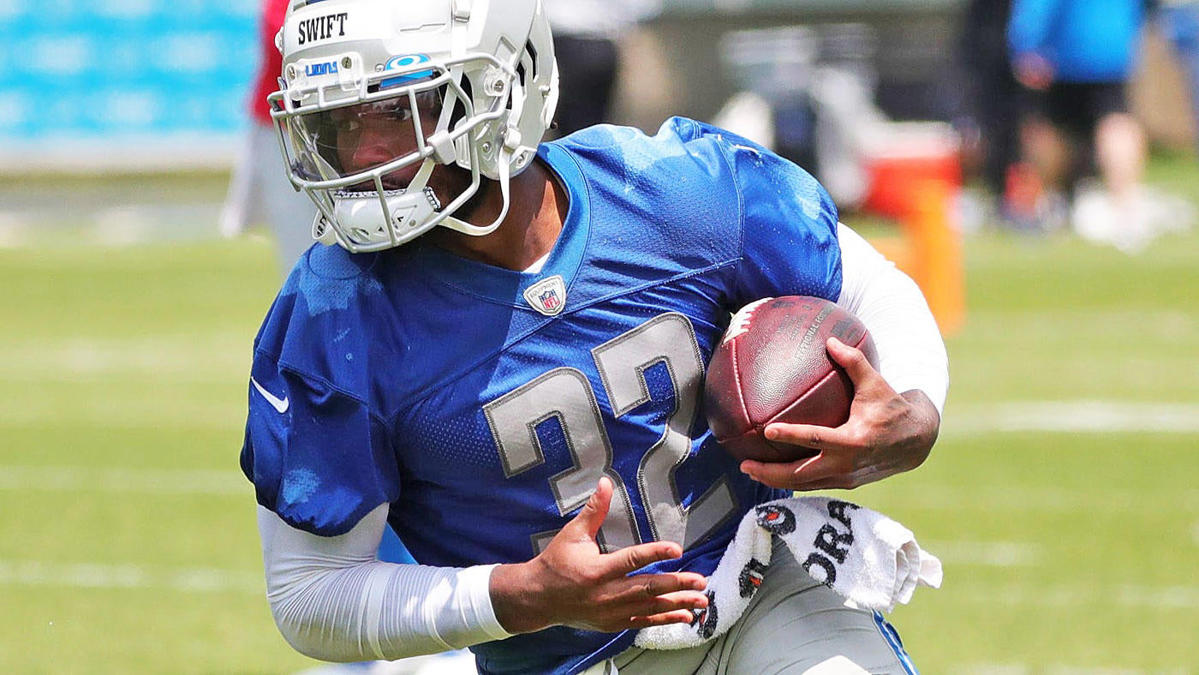 TAMPA, FLORIDA – OCTOBER 04: Justin Herbert #10 of the Los Angeles Chargers looks to pass during the third quarter of a game against the Tampa Bay Buccaneers at Raymond James Stadium on October 04, 2020 in Tampa, Florida.

Who are the players who will step in for injured starters and be difference-makers in your Week 6 NFL DFS lineups? A top Week 6 NFL DFS strategy starts with identifying those backups who will make the most of an added workload at a lower cost. Before locking in your NFL DFS picks for Week 6, be sure to check out the NFL DFS advice, player rankings, stacks and top daily Fantasy football picks from SportsLine’s Mike McClure.

McClure is a legendary professional DFS player with almost $2 million in career winnings. His methodology has led to enormous cashes on FanDuel and DraftKings. He took down two high-stakes tournaments on FanDuel in 2020 and recorded a pair top-10 finishes in tournaments with over 130,000 entrants on DraftKings. His lineups also finished inside the top 1 percent in more than a dozen other tournaments last season.

He uses a powerful prediction model that simulates every snap of NFL action, taking factors such as matchups, statistical trends and injuries into account. This allows him to find the best DFS values that he shares only with members at SportsLine.

Now, McClure has turned his attention to the Week 6 NFL DFS slate and locked in his top daily Fantasy football picks. You can only see them by heading to SportsLine.

One of McClure’s top NFL DFS picks for Week 6 is Washington tight end Ricky Seals-Jones ($3,000 on DraftKings and $5,000 on FanDuel). Most NFL teams have targeted the tight end position more than the Washington Football Team, but quarterback Taylor Heinicke seems to be looking for Seals-Jones, who has 12 targets over the last two games.

Seals-Jones has taken over for injured starter Logan Thomas and played 99 percent of Washington’s offensive snaps in Week 5, reeling in all five of his catchable targets against New Orleans. In Week 6, Washington faces Kansas City, which has been the fifth-worst Fantasy defense against tight ends this season. Washington’s receiving corps have been banged up lately, and Seals-Jones accounted for a higher target share than Washington’s entire running back room in Week 5.

Swift is splitting carries with Jamaal Williams but is still averaging nearly 40 yards per game on the ground to go along with two scores. Swift makes his biggest impact in the passing game, as he leads all running backs in receptions (29) while ranking second in receiving yards (252). That makes him one of the top NFL DFS picks for Week 6 as the Lions take on a Bengals squad that was just victimized by opposing running backs in Week 5. Cincinnati allowed Aaron Jones to rush for over 100 yards while also allowing AJ Dillon to pile up 79 scrimmage yards and a receiving touchdown.

How to set NFL DFS lineups for Week 6

McClure is also targeting an undervalued player who is set to explode for huge numbers on Sunday. This pick could be the difference between winning your tournaments and cash games or going home with nothing. You can only see who it is here.

So who is Mike McClure putting in his optimal NFL DFS lineups for Week 6? Visit SportsLine now to see optimal NFL DFS picks, rankings, advice, and stacks, all from a daily Fantasy expert with nearly $2M in winnings, and find out.

Is it time to start worrying about the Nets record against contending teams?

‘I'm a bit of a bastard in the team', Thijs Matheij surprisingly leads the first division with SV Deurne

Formula 1 bracing for a title-deciding crash

App State? Michigan puts a run of mediocrity behind it with a dominating Big Ten title

© Provided by Texans Wire texans-9-roster-moves-colts-rematch The Houston Texans have made a flurry of roster moves as they get ready for their Week 13 rematch with the Indianapolis Colts. The ... Read more »

The APEX Center in Las Vegas, Nevada was home to a great evening of fights at UFC Vegas 44: Font vs. Aldo. The card saw six (T)KOs, two submissions and ... Read more »

© Esther Lin, MMA Fighting Jose Aldo The UFC Vegas 44 post-fight press conference is the last piece of business to take care of after the action is over in ... Read more »

Canadiens reported to have interest in Kent Hughes as GM

Jeff Gorton said something very interesting when he met with the Montreal media for the first time Friday as the Canadiens’ new executive vice-president of hockey operations. © Provided by ... Read more »

Kerala Blasters to ATK Mohun Bagan - What are the biggest wins of each ISL team?

Warriors lose to Spurs following huge win over Suns, falling victim to trap game they saw coming a mile away

© Provided by CBS Sports SAN FRANCISCO — Some results come out of nowhere. A pesky 15-seed shoots the lights out and takes down a blue-blood in the opening round ... Read more »

© Provided by CBS Sports The Chicago Bulls finished their New York road trip with a gutsy 111-107 win over the Brooklyn Nets on Saturday night. The Bulls, who were without ... Read more »

FC Utecht goalie Maarten Paes in the lead against PSV: ‘More than a mistake by the keeper'

Premium The best of De Telegraaf Through Jeroen Kapteijns Updated 14 min ago15 min ago in FOOTBALL FC Utrecht goalkeeper Maarten Paes has been defeated again. Philipp Mwene made the ... Read more »

The College Football Playoff pairings will be unveiled Sunday, but Sporting News is putting out its best guess now as to how those final pairings will look for 2021.  Conference ... Read more »

Four teams have secured spots in the College Football Playoff, including two teams from the SEC. The fourth spot to round out the field was determined in prime time, with Michigan ... Read more »

We’re entering the second-to-last of the NFL’s bye weeks in Week 13, so soon, all 32 NFL teams will be playing weekly once again. That said, the Sunday slate has ... Read more »

© Provided by The Spun John Metchie runs after the catch during a College Football Playoff game. Alabama’s bid to repeat appears to have taken a serious hit. Per Barrett ... Read more »

© Provided by CBS Sports Nobody is surprised, right? We all predicted this at the beginning of the season. No. 3 Alabama will very likely be the top seed in ... Read more »

Watch: Kenny Pickett scores touchdown on what should be illegal play

© Provided by Ravens Wire The Baltimore Ravens have gotten contributions from their practice squad throughout the course of the 2021 season so far. With how many injuries they’ve had ... Read more »

© Provided by Fansided In his second season as head coach, Deion Sanders led Jackson State to a SWAC Championship win on Saturday. Back in 2020, Jackson State hired Pro ... Read more »

© Provided by CBS Sports ATLANTA — No. 3 Alabama walked into the SEC Championship Game against No. 1 Georgia on Saturday as 6.5-point underdogs. It marked the first time it ... Read more »

© Provided by Ravens Wire The Baltimore Ravens have proved many doubters wrong over the first 12 weeks of the 2021 season, boasting an 8-3 record while not only being ... Read more »

© Provided by Wolverines Wire INDIANAPOLIS, In. — Michigan football has won its first Big Ten Championship since 2004 after defeating the Iowa Hawkeyes on Saturday, 42-3. It was the ... Read more »

Kyler Murray expected to start, DeAndre Hopkins to have limited role vs. Bears

© Steve Roberts-USA TODAY Sports The passing game was not just DeAndre Hopkins. He led the way with six receptions for 83 yards and two touchdowns. However, Christian Kirk had ... Read more »

© Provided by Firstpost Live Cricket Score, Bangladesh vs Pakistan 2nd Test Day 2 in Dhaka Toggle between the tabs above to switch between quick scorecard, full scorecard and ball-by-ball ... Read more »

View, review: Why the '83 triumph by Kapil's Devils is Team India's greatest win

© Provided by The Indian Express The traction and interest generated by the theatrical trailer of the film 83 just proves that despite almost four decades having elapsed from arguably ... Read more »

© Provided by News18 One of the most popular football clubs in Russia, Zenit St. Petersburg is known for reaching out to its fanbase with social endeavours. The club has ... Read more »

This is the UFC Vegas 44 live blog for Rob Font vs. Jose Aldo, the bantamweight headliner for Saturday’s fight card at UFC APEX in Las Vegas. © Photo by ... Read more »

New England, Miami, Indianapolis, and Philadelphia are on a bye in Week 14. That won’t only take away some key offensive players like Jalen Hurts, Jaylen Waddle, and Jonathan Taylor, ... Read more »

How to watch Manchester United vs Crystal Palace in the 2021-22 Premier League from India?

© Provided by WarriorsWire Since the Golden State Warriors have moved to Chase Center in San Francisco, Steph Curry has been attempting different pregame trick shots to replace his legendary ... Read more »

Spanish media critical of FC Barcelona: ‘Situation around Memphis is starting to get worrying' Foreign football