Newcastle United have now been gifted a triple injury boost before their game at home against Leeds United in the Premier League on Friday night. 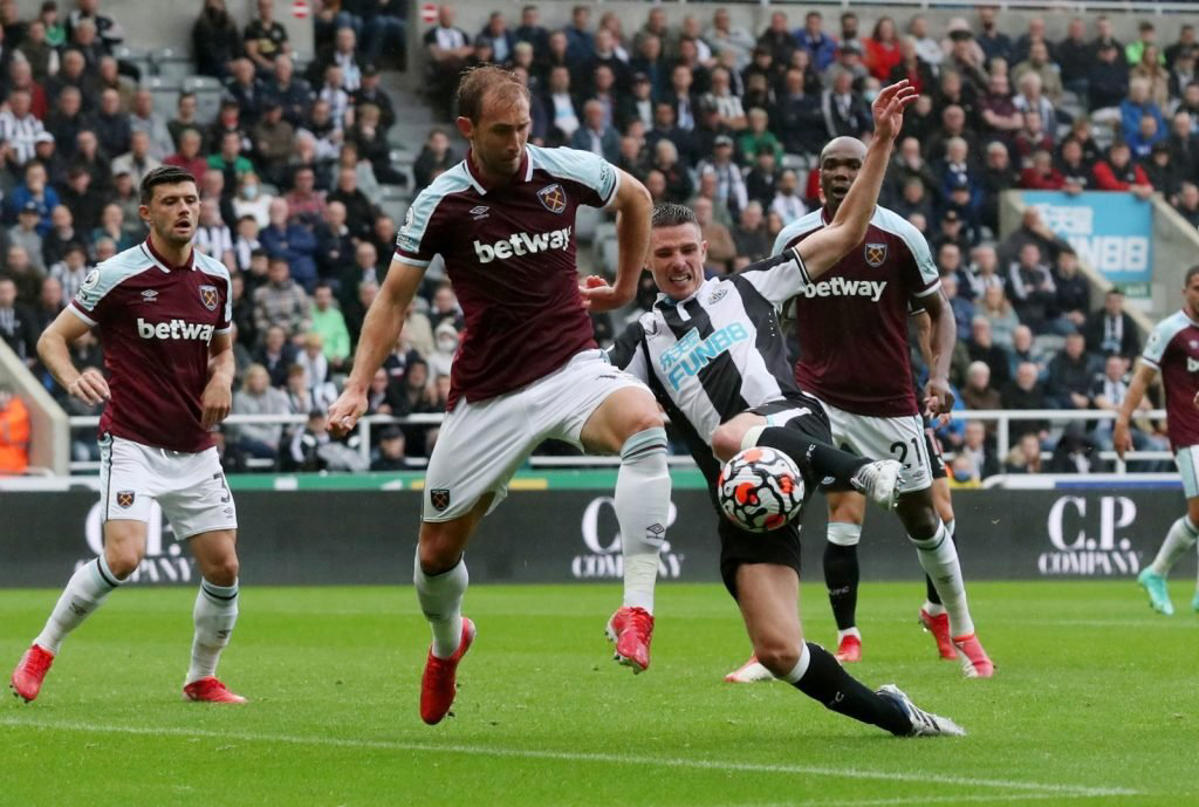 Speaking in his post-match press conference after his team lost 4-1 away at Manchester United on Saturday afternoon, Steve Bruce said that both Joe Willock and Ciaran Clark had picked up knocks.

Ryan Fraser limped out of Scotland’s team hotel with a large protective boot and crutches during the international break (talkSPORT), which certainly would have worried Bruce ahead of his side’s return.

As per the official website of the St. James’ Park faithful, latest images from the training ground showed Willock, Clark and Fraser, with the former two ‘appearing to have overcome’ the knocks that they picked up at Old Trafford last weekend.

Bruce has also confirmed in his pre-game press conference that Fraser is ‘OK’ and has ‘put himself in contention’ to play against the Whites, while both Willock and Clark have also ‘come through’.

It is certainly a boost that all three players have returned to training, and Bruce will no doubt be desperate that they will be fit enough and available for selection.

With Callum Wilson now out injured, the Tyneside outfit may have to rely on players like Willock for goals, and the former Arsenal midfield player showed that he is more than capable of scoring during his loan spell last season (Transfermarkt).

Nonetheless, the Magpies will desperately want to get all three points on the board, and will hope that Willock, Clark and Fraser can help them get them.

In other news, find out what reassuring takeover insight Liam Kennedy has dropped here!

WHO's Covid chief says MPs should wear masks in Commons

Wolves' Jordan McLaughlin: My job is 'to be ready at all times'

The Government will push water companies to cut sewage overflow into rivers in a U-turn to avoid defeat ahead of Cop26. © Provided by The Telegraph Britain’s Victorian sewage system ... Read more »

The British public are in favour of a referendum on the Government’s net zero proposals, a new poll has shown. © Andrew Parsons/No10 Downing Street The news might come as ... Read more »

In four days’ time, Cop26 will open. It represents one of the last hopes for governments to get their acts together and cut emissions at the scale and pace needed ... Read more »

Sometimes being a big star isn’t quite as cool as you might think. Sometimes when Tom Cruise does his own stunts he breaks bones, and sometimes when Hugh Jackman is ... Read more »

AC Milan 1-0 Torino: Giroud tap in sends Pioli's side top of the table

© Photo by Martin Rose/Getty Images Well, THIS isn’t going to do anything to stop the rampaging #narrative surrounding Dele Alli. According to Sami Mokbel at the Daily Mail, Tottenham ... Read more »

Braves great Tom Glavine on Astros scandal: 'Everybody in baseball is trying to cheat'

© Gregory J. Fisher-USA TODAY Sports Hall of Famer Tom Glavine thinks that the criticism of the Astros has gotten out of hand. The Houston Astros enter the 2021 World ... Read more »

© Provided by Fansided The Atlanta Braves could be the next team in line for a name change, right after the soon-to-be Cleveland Guardians. Here’s what Rob Manfred had to ... Read more »

The good, the bad, and the ugly for Bayern Munich ahead of Gladbach tilt

© Photo by Lukas Schulze/Getty Images Bayern Munich will square off against Borussia Mönchengladbach in the DFB-Pokal and it would have been too easy to just have a normal session ... Read more »

Six months ahead of France’s April 2022 presidential elections, all three major left-wing candidates are flagging in the polls as they struggle to gain traction outside big cities amid a ... Read more »

© Provided by NBC Sports LeBron James said his leg was “sore” following Sunday’s game, when the Grizzlies’ Desmond Bane was knocked into LeBron’s leg and he went to the ... Read more »

With six teams on bye last week, the best players currently available on the fantasy waiver wire might have just been dropped because their teams didn’t have a game over ... Read more »

The rumors generated over the offseason that Kirill Kaprizov was headed back to Russia almost threw Minnesota Wild fans over the edge. Luckily, they weren’t true. He ended up signing ... Read more »

Photograph: Lukas Coch/AAP There’s not a lot of good news, so for the sake of all our sanity, let’s start with the good news. The Morrison government has adopted a ... Read more »

© Provided by Metro Ben White was substituted just 55 minutes into Arsenal’s win over Leeds (Picture: Getty Images) Mikel Arteta has revealed that Ben White was suffering with a ... Read more »

© Provided by This Is Money MailOnline logo Any expectation that Nikhil Rathi, chief executive of the Financial Conduct Authority (FCA), might find a way to put sand in the ... Read more »

LONDON (Reuters) – British retailers warned on Wednesday of pre-Christmas price rises after they reported the smallest year-on-year decline in the average selling price of goods in their stores since ... Read more »

Following their Tuesday kicker workout, the Chargers are making a change at kicker. They announced the signing of Dustin Hopkins. To make room for the veteran on their roster, the ... Read more »

Rishi Sunak will hail a “new age of optimism” in his Budget amid predictions he will have more money than expected to spend due to a fast bounce-back from Covid. ... Read more »

© Provided by Daily Mail MailOnline logo The high glamour of Hollywood was traded for the fast fashion of Oxford Street as Angelina Jolie made an unlikely appearance at a ... Read more »

Virus Outbreak New Zealand (New Zealand Herald) New Zealand's government said Tuesday it will expand a vaccine mandate to include thousands of workers who have close contact with their customers ... Read more »

Top Republicans in Florida are considering a new approach in their opposition to the federal vaccine mandate imposed by President Joe Biden: throwing the baby out with the bathwater. The ... Read more »

Hours after Chicago Blackhawks general manager and president of hockey operations Stan Bowman stepped away from the organization following an independent investigation into sexual assault allegations made against then-video coach ... Read more »

Jamaican cult leader Kevin Smith was taken into custody on 17 October (PBC Jamaica) Kevin Smith, the leader of a Jamaican cult which allegedly practices human sacrifice, was among the ... Read more »

© Provided by This Is Money MailOnline logo Any expectation that Nikhil Rathi, chief executive of the Financial Conduct Authority (FCA), might find a way to put sand in the ... Read more »

© Provided by City AM City bigwigs have demanded social media companies clamp down on “money muling” ads on their platforms which could leave young people blacklisted from credit for ... Read more »

© Provided by NBC Sports The Lions cut defensive back Daryl Worley on Tuesday. The roster move came after he got beat by Cooper Kupp for a 59-yard reception on ... Read more »

© Provided by NBC Sports As NFL owners gather in New York for their first in-person meeting since December 2019, one of them finds himself in the middle of a ... Read more »

Shohei Ohtani wins Commissioner's Historic Achievement Award: What is that?

Sunak is mocked for wearing 'teenage' flip-flop footwear in photoshoot

Australia's net-zero emissions ‘plan': the five things you should know

John Klingberg wants to stay with Stars, but will he?

Sudan shuts down the internet after a military coup