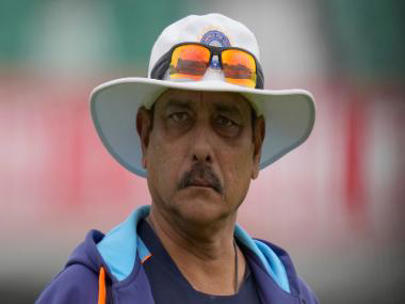 India men’s cricket team head coach Ravi Shastri has hinted he will step down from his role after the ICC T20 World Cup which will be held in UAE and Oman in October-November. This follows Virat Kohli’s recent announcement that he will also give up the T20I captaincy after the ICC event.

“I believe so because I’ve achieved all I wanted,” said Shastri talking about his tenure to The Guardian. “Five years as No 1 [in Test cricket], to win in Australia twice, to win in England. I spoke to Michael Atherton earlier this summer and said: ‘For me, this is the ultimate – to beat Australia in Australia and win in England in COVID times.’ We lead England 2-1 and the way we played at Lord’s and the Oval was special.”

“We’ve also beaten every country in the world in their own backyard in white-ball cricket. If we win the [T20] World Cup that will be the icing on the cake. There is nothing more. I believe one thing – never overstay your welcome. And I would say that, in terms of what I wanted to get out of the side, I’ve over-achieved. To beat Australia away and to lead the series in England in a COVID year? It is the most satisfying moment of my four decades in cricket.”

Shastri also said that he has “no regrets” over attending the launch of his book in London that is held responsible for the COVID-19 outbreak in the Indian camp.

Shastri tested positive during The Oval Test match four days after attending the book event after which bowling coach Bharat Arun and fielding coach R Sridhar also contracted the virus. Team India’s junior physio Yogesh Parmar tested positive a day before the Manchester Test which eventually led to the cancellation of the fifth and final match with some players refusing to take the field.

Shastri was India’s team director from 2014 to 2016 after which Anil Kumble was appointed head coach. In 2017, Shastri was made the coach after Kumble made an unceremonious exit.

British rider cycled away from dope test before London 2012

Dejoy: Postal Service to add 45 facilities ahead of holiday season

Covid-19 vaccines are our way through the winter, Boris Johnson insists

Britney Spears SHARES throwback photos of her kids, ADMITS watching them grow up is ‘bittersweet'

David Beckham is set to be named as the face of the 2022 Qatar World Cup next month – making a staggering £150m in the process. It has been reported ... Read more »

© Getty and Peter Phipp/Getty Liz Truss and Whitehall Many civil servants still only come in two days a week instead of returning to their offices in Whitehall even though ... Read more »

GREEN BAY, Wis. (AP) — Green Bay Packers center Josh Myers has been placed on injured reserve after hurting his knee in a victory over the Chicago Bears. © Provided ... Read more »

© Provided by Hindustan Times Since the Covid pandemic started, the overall cases in Jammu and Kashmir have reached 3,31,566 and the death toll stands at 4,429. (Representational Image/HT File) ... Read more »

Uttarakhand's most disaster-related deaths in 2021

© Provided by The Times of India DEHRADUN: With 298 deaths and 66 reported missing in weather-related disasters in 2021, the year has turned out to be the second-worst in ... Read more »

© Provided by Daily Mail MailOnline logo Sports Illustrated beauties and influencers were in attendance at an elegant brunch thrown by Deseda in New York City.  Held at the Soho ... Read more »

© Getty Woman worried about bills and smart meter The demand by shadow Chancellor Rachel Reeves would be worth £1.6billion according to HMRC figures. It comes amid growing concerns of ... Read more »

Denis Villeneuve’s take on Frank Herbert’s Dune is colossal—with expansive desert shots and huge army artillery. But, as with all his work, the director manages to capture the intimacy and ... Read more »

Former President Barack Obama urged voters to shake off their exhaustion with politics during his first in-person foray onto the campaign trail in 2021, telling voters in Virginia that “we ... Read more »

As tributes poured in from around the world in remembrance of cinematographer Halyna Hutchins – who was fatally shot by mistake on set by Alec Baldwin with a prop gun ... Read more »

No 10 sinks 'nanny state' plan to ban smoking on pavements

© Provided by Daily Mail MailOnline logo Downing Street has quashed an attempt by Government advisers to ban the smoking of cigarettes on pavements outside pubs and restaurants. The idea ... Read more »

© BBC iPlayer Strictly-Tilly-Ramsay.png It was another busy week beneath the BBC glitterball, complete with showmance rumours, body-shaming controversies and positive Covid tests. Frankly, we were relieved to get back ... Read more »

El Clasico: Vinicius Junior is ready to become the man for Real Madrid

© Provided by Daily Mail MailOnline logo The sense that Vinicius Junior is coming of age this season has been brewing for some time in the Spanish capital.   If he ... Read more »

DAN HODGES: Save the planet, Boris, by axeing a farcical summit

© Provided by Daily Mail MailOnline logo The Cabinet Minister was laughing. They decided that everyone who attends COP26 had to be driven around by an electric car. But so ... Read more »

Rolls-Royce being urged to carry out nuclear testing in UK

© Provided by This Is Money MailOnline logo Rolls-Royce is being urged to carry out nuclear testing in the UK after it emerged that the company was considering using a ... Read more »

© Provided by Daily Mail MailOnline logo Former President Trump and his loyal associates set up ‘war rooms’ in a downtown DC hotel where they planned out their efforts to ... Read more »

© Provided by The Spun A Chicago Bears helmet sitting on the field. The Bears has suffered a significant loss to their defensive line just 24 hours ahead of Sunday’s ... Read more »

© Provided by Fansided The NFL levied a pair of fines against the Dallas Cowboys in their overtime win over New England — most notably to wideout CeeDee Lamb. The ... Read more »

© Provided by Fansided According to reports, James Franklin is being targeted by LSU and USC for their head coach vacancies, but the Penn State coach underwhelmed vs. Illinois. There ... Read more »

© Provided by Fansided Fingers can be pointed all around, but Penn State now has two losses on the year after falling in nine overtimes to Illinois at home on ... Read more »

© Provided by The Spun Arch Manning visiting the University of Georgia. Five-star quarterback Arch Manning is getting the five-star celebrity treatment in Oxford, Miss. this afternoon. Manning, the No. ... Read more »

PHOTOS: Katrina Kaif pulls off an effortless look in printed pink tee as she gets papped at the airport

One of the busiest actresses in the Bollywood industry is Katrina Kaif. She has several projects lined up including ‘Tiger 3’, ‘Sooryavanshi’, ‘Phone Bhoot’ and more. Apart from impressing fans ... Read more »

© Provided by Fansided The Penn State Nittany Lions lost to the Illinois Fighting Illini in one of the weirdest ways possible. No game should ever go into nine overtimes ... Read more »

© Provided by Fansided NBC rules expert Terry McAuley said the referees messed up on the controversial fourth-down play that helped Oklahoma squeak by Kansas. Oklahoma has been playing with ... Read more »

© Provided by LSU Tigers Wire Well, the Tigers have managed to hold on. It seems like LSU has taken a turn for the better now that Orgeron has been ... Read more »

© Provided by Fansided The Russian broadcast for the end of the nine overtime game between Penn State and Illinois game is fantastic. You need to check this out. The ... Read more »

© Provided by The Spun A general view of the Superdome during a Saints game. After spending a decade in the NFL, wide receiver Chris Hogan has decided to retire. ... Read more »

© Provided by The Spun Darren Waller of the Raiders runs with the football. With kickoff less than 24 hours away, the Las Vegas Raiders have downgraded tight end Darren ... Read more »

© Provided by The Spun Illinois at Penn State overtime game. Unranked Illinois just upset No. 7 Penn State 20-18 with a thrilling nine-overtime contest in Beaver Stadium. Under the ... Read more »

© Provided by The Times of India SRINAGAR: Home minister Amit Shah reached out to the youth of Jammu and Kashmir on Saturday, asking them to join the fight against ... Read more »

Comic Matt Richardson talks to ME & MY MONEY

How much longer can we tolerate anti-vaxxers? DAVID MELLOR

Covid vaccines are way through winter and out of pandemic, says Boris

New schemes to back innovative businesses and woo foreign talent

Michael Gove ‘open' to keeping Grenfell Tower as a memorial