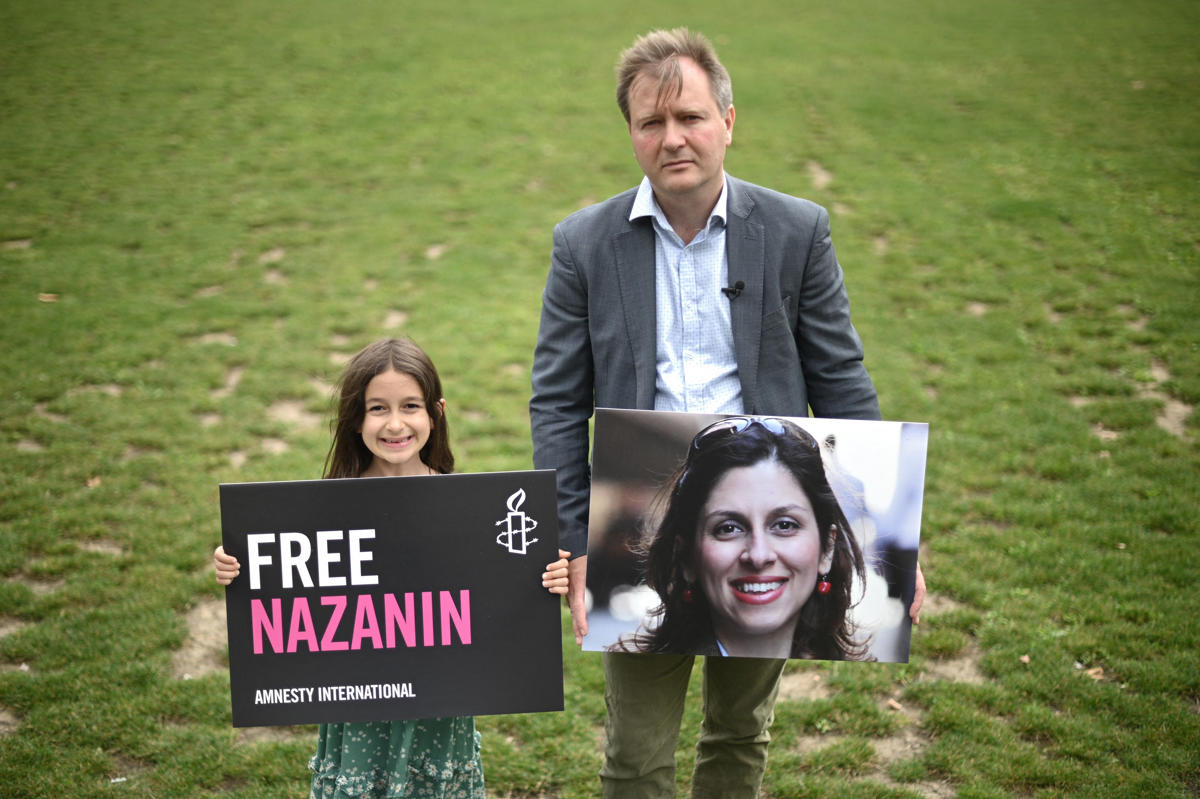 © DANIEL LEAL-OLIVAS Richard Ratcliffe and his daughter Gabriella pose with placards of jailed British-Iranian aid worker Nazanin Zaghari-Ratcliffe on September 23 at an event in Parliament Square, London, to mark the 2,000th day of her detention in Iran. AFP

British-Iranian charity worker Nazanin Zaghari-Ratcliffe has lost an appeal against her second jail term in Iran and could be returned to prison “at any time,” her supporters say.

Her London MP said Ms Zaghari-Ratcliffe’s sentence of one year, plus a one-year travel ban, has been “upheld with no court hearing”.

The Free Nazanin group said there was no summons date yet for her return to prison.

“This is yet another piece of devastating news for my constituent, her family and the millions around the world who care about her. For Nazanin to face a return to prison after the ordeal she’s been through is nothing short of a catastrophe,” said Ms Siddiq.

“It seems that every time we dare to hope that Nazanin might soon be free, there is another dreadful setback that puts freedom out of sight. Whatever the prime minister has been doing to free Nazanin is clearly not working.

“It’s time for the UK government to pay the debt we owe to Iran, stand up to their despicable hostage taking and finally get Nazanin home.”

Supporters link her detention to the UK’s failure to pay an outstanding £400 million ($549m) debt to Iran. She is one of several people with British or dual-British nationality detained in Iran.

Ms Zaghari-Ratcliffe was arrested in April 2016 while visiting family with her daughter Gabriella.

Ms Zaghari-Ratcliffe was convicted of plotting to overthrow the regime – a charge she strenuously denied – and given a five-year sentence, much of it spent in Tehran’s notorious Evin prison.

She spent the final year of her sentence under house arrest in Tehran, but after her release this year she was then convicted of “spreading propaganda against the regime”.

Amnesty International also condemned the news and described it as “more torment on top of five-and-a-half years of suffering for Nazanin and her family”.

“Nazanin was subjected to a deeply unfair original trial, was rushed through a farcical second court process and is now confronted by more time behind bars – it’s absolutely excruciating to see this happening,” it said.

“We’ve said repeatedly that Boris Johnson, [Foreign Secretary] Liz Truss and others in government need to genuinely step up on Nazanin’s case and other cases where British nationals are being persecuted in Iran.

“We want to see action urgently, and this must include the Government setting out a clear strategy for securing the release of all British nationals unlawfully held in Iran.”

Ms Truss met her Iranian counterpart last month where she “pressed” him on the issue and vowed to “continue to press” him until Ms Zaghari-Ratcliffe returns home.

DWP update as £800 payment available to Britons before Christmas

Omicron variant latest: Third UK case confirmed as masks to return to schools, transport and shops in England on Tuesday

Parks turned into dump sites in ward 22 of Chandigarh

© Provided by The Times of India NEW DELHI: At a time when a new variant has led to restrictions on travellers from South Africa and other African nations, many ... Read more »

© Provided by Hindustan Times The cops demanded reduction in their contractual period from eight years to two years, better housing facilities and ration allowance while staging a protest outside ... Read more »

© Provided by Hindustan Times A case under Section 379-A (snatching) of the Indian Penal Code has been registered at the Sector-39 police station in Chandigarh against an unidentified person. ... Read more »

Palampur: Fire breaks out at laboratory in Institute of Himalayan Bioresource Technology laboratory

© Provided by Hindustan Times A fire broke out in the chemistry laboratory of the Institute of Himalayan Bioresource Technology, Palampur, in the wee hours of Sunday. (HT Photo) Laboratory ... Read more »

© Provided by Hindustan Times With 62 fresh Covid- cases on Sunday, Himachal’s case tally rose to 2,27,003.The highest of 35 cases were reported from Shimla, 11 from Kangra and ... Read more »

© Provided by Hindustan Times Himachal governor Rajendra Vishwanath Arlekar stressed on documentation of medicinal plants found in the state. He was speaking after inaugurating the state convention of Arogya ... Read more »

Watch: Viking defender Brekalo sent off for attacking his own goalkeeper in Norwegian league game

Viking defender David Brekalo was sent off during Sunday’s Eliteserien match against Kristiansund after attacking his own goalkeeper in the 95th minute. Brekalo repeatedly pushed goalkeeper Patrik Gunnarsson during the ... Read more »

LONDON (Reuters) – Chelsea coach Thomas Tuchel praised his captain Jorginho for overcoming a howler of a mistake that gifted Manchester United a breakaway goal, and recovering his confidence to ... Read more »

Novak Djokovic's father claims he is being 'blackmailed' over Australian Open

Novak Djokovic‘s father has slammed the “embarrassing” way he feels his son has been treated by officials in Victoria as the row over unvaccinated players being banned from the Australian ... Read more »

Cristiano Ronaldo was benched for Man Utd's 1-1 draw with Chelsea; Roy Keane: "Ronaldo has not come back to Manchester United to sit on the bench"; Jamie Carragher: "I don't think it should be a big story if Ronaldo doesn't start every game" Read more »

© Bang Showbiz Tilly Ramsay and Nikita Kuzmin have left Strictly Tilly Ramsay is the latest celebrity to be eliminated from ‘Strictly Come Dancing’. The 20-year-old YouTuber – who reduced ... Read more »

On the backfoot for not considering a Hindu Congress leader, Sunil Jakhar, as the Punjab Chief Minister, the Congress on Sunday went on a spree of announcements to woo the ... Read more »

Giants defense saves the day in win over Eagles

The Giants are in no position to rank any victories. They are all precious gems to them because they are all so rare. And so, another offensively challenged and unsightly ... Read more »

Michael Strahan tells fans Giants ‘will be back' in No. 92 retirement ceremony

In a ceremony to honor his great past, Michael Strahan promised a better future for the Giants. The Giants retired Strahan’s No. 92 on Sunday during halftime against the Eagles, ... Read more »

CREDIT cards are a handy tool for your wallet but only if you use them correctly – get it wrong and you could end up spending thousands more in interest ... Read more »

I’M A Celebrity bosses are braced for more weather chaos after Storm Arwen destroyed pop-up studios at Gwrych Castle. The weekend weather bomb was said to have left the venue ... Read more »

FRANKIE Bridge begged I’m A Celebrity bosses to wash her dirty knickers after the stars were removed from the castle – admitting they stank of fish guts and offal from the trials. The ... Read more »

© AHMAD GHARABLI In this file photo, members of Israel’s Ethiopian community hold photographs during a demonstration demanding the rescue of their relatives from the conflict in Ethiopia, in Jerusalem ... Read more »

B.C. set to use Alert Ready system when next storm strikes in days ahead

VICTORIA — British Columbia says it’s prepared to use a national emergency alert system should the third in a trio of ongoing storms pose a risk to life and safety ... Read more »

Brazilian authorities burned more than 60 river-dredging boats in a crackdown on wildcat miners drawn to a major Amazon tributary by rumors of a gold find, the government and Greenpeace ... Read more »

Covid: Britons who refuse to wear a mask ‘face fines of £200' as ministers tighten rules

Britons who refuse to wear a face mask could face fines of £200 as the Government tightens Covid restrictions to contain the Omicron variant, according to a report. © PA ... Read more »

SASKATOON — Jennifer Jones defeated Tracy Fleury 6-5 in the women’s final at Canada’s Olympic curling trials to secure a berth at the Beijing Games.  © Provided by The Canadian ... Read more »

During the night between Saturday and Sunday, five people were arrested for driving under the influence in Bergen and the surrounding area. One of the cars hit a wall in ... Read more »

The trial of British socialite Ghislaine Maxwell, who is accused of helping her close confidant Jeffrey Epstein recruit and sexually abuse underage girls, is set to begin on Monday, more ... Read more »

© Tom Rigby/SWNS tan hill inn 1.jpg Staff at a pub cut off by snow were preparing a karaoke evening on Sunday as they expect guests to be unable to ... Read more »

© Provided by Cover Media Lindsay Lohan Lindsay Lohan is engaged to her boyfriend of two years. The Mean Girls actress took to Instagram on Sunday to announce that she ... Read more »

'As a player it's absolute jubilation...It's a big sigh of relief when you're a coach'

© Ryan Byrne INPHO Stephen O’Donnell celebrates post-game. STEPHEN O’DONNELL contrasted the experience of winning his first FAI Cup as a coach with the three cups he won as a ... Read more »

Gordon Ramsay shed a tear as his daughter Tilly exited Strictly Come Dancing. The TV chef was clearly a proud father as he watched Tilly give a heartfelt speech following ... Read more »

Rochelle Humes reveals a Saturdays' reunion is off the cards

© Provided by Daily Mail MailOnline logo Rochelle Humes revealed a Saturdays reunion is off the cards as it ‘wouldn’t work’ for her life right now. The media personality, 32, ... Read more »

Vita Vea gets tooth knocked out, seems just fine with that

Vita Vea was all smiles despite getting one of his front teeth knocked out Sunday. The Buccaneers’ defensive tackle was shown grinning and pointing to his bloody new gap on ... Read more »

AN anti-vaxxer who refused to get the Covid jab because it's not vegan has died from the virus after a two-week battle in intensive care. Glynn Steel, 54, told his ... Read more »

Samir Soni on divorce with first wife Rajlakshmi Khanvilkar: We could have given it more time

NIH Dir. Collins: COVID vaccines will 'most likely' protect against omicron variant, but too soon to tell

Omicron will cause chaos in schools, warn MPs

Germany: Plan to use Nazi site for Nuremberg opera slammed