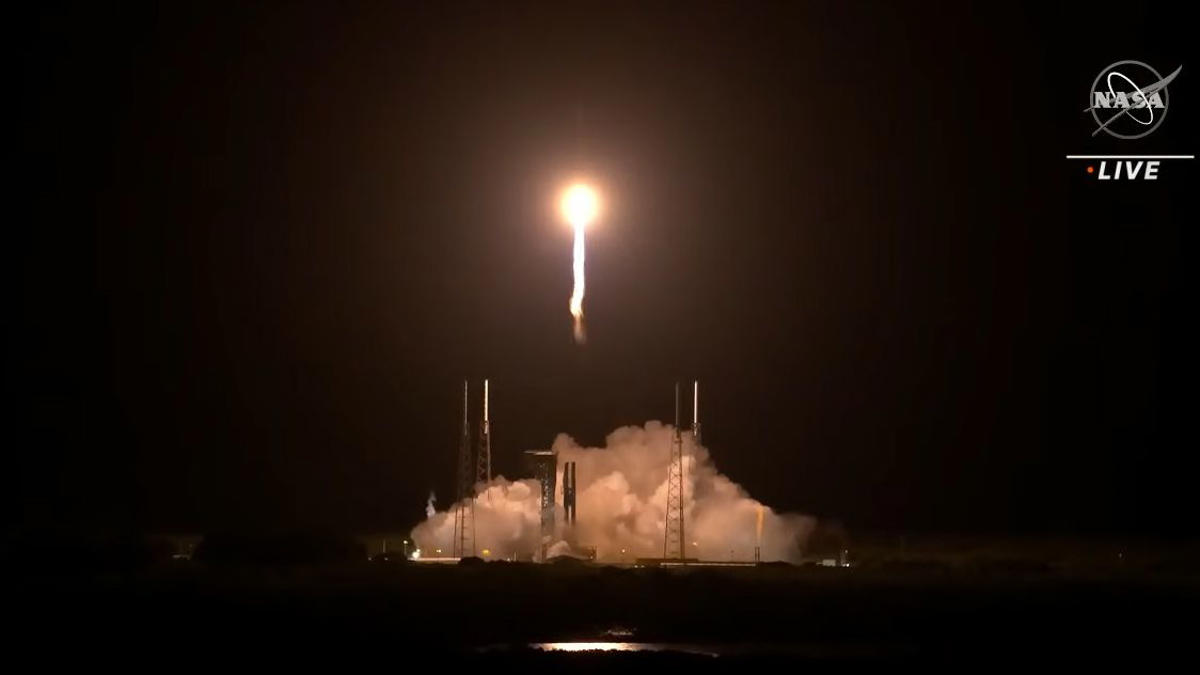 Lucy launches under the cover of dark on Oct. 16

It was the 100th launch from Cape Canaveral Space Launch Complex 41. Approximately 58 minutes after launch the probe, which is about as wide as bus, was released from the second stage rocket booster to begin its long journey toward Jupiter’s orbit. The United Launch Alliance team celebrated with hugs and clapping in its mission control room.

“It was one of the most exciting experiences of my life,” said Hal Levison, principal investigator of the Lucy mission, post-launch. “It was truly awesome, in the old-fashioned meaning of the word.”

Over the next two years, Lucy will use Earth’s gravity twice to swing toward the solar system’s largest planet. But the gas giant isn’t Lucy’s destination. Instead, it will explore a series of asteroids, locked in Jupiter’s orbit, known as the Trojans.

These asteroids have never been studied up-close before and move as huge swarms, or camps, at the “Lagrangian points” in Jupiter’s orbit. The Lagrangian points are regions where gravity’s push and pull lock the camps in place, leading and trailing Jupiter in its journey around the sun in perpetuity.

The collection of amorphous space rocks are like a series of cosmic fossils, providing a window into the earliest era of our solar system some 4.6 billion years ago. Lucy will act as a cosmic palaeontologist, flying past these eight different “fossils” at a distance and studying the surface with infrared imagers and cameras.

“No spacecraft has visited so many objects before, and each is a potential window into the material and conditions of the early solar system,” says Alan Duffy, an astrophysicist at Swinburne University in Melbourne.

The idea of examining fossils is core to the missions philosophy — right down to its name. “Lucy” is derived from a hominid skeleton discovered in Ethiopia in 1974. The skeleton was dubbed Lucy because the Beatles’ song “Lucy in the Sky With Diamonds” was playing in the scientists’ camp after the find. Words from all four Beatles are contained on a plaque inside the spacecraft.

While the early morning launch and separation was marked down as a success on Lucy extensive to-do list, the spacecraft had to overcome one final, giant hurdle before it was ready to sail out of Earth’s backyard. About one hour into its flight, the probe experienced “20 minutes of terror,” as it unfurled its 24 foot wide decagonal solar panels.

The panels are critical to the spacecraft’s success and will power Lucy during the 12-year journey toward the Trojans. They can supply about 500 watts of power — about the same amount of energy necessary to run a washing machine, according to NASA. And they’ll need every watt because Lucy will be the farthest solar-powered spacecraft should it reach its destinations. 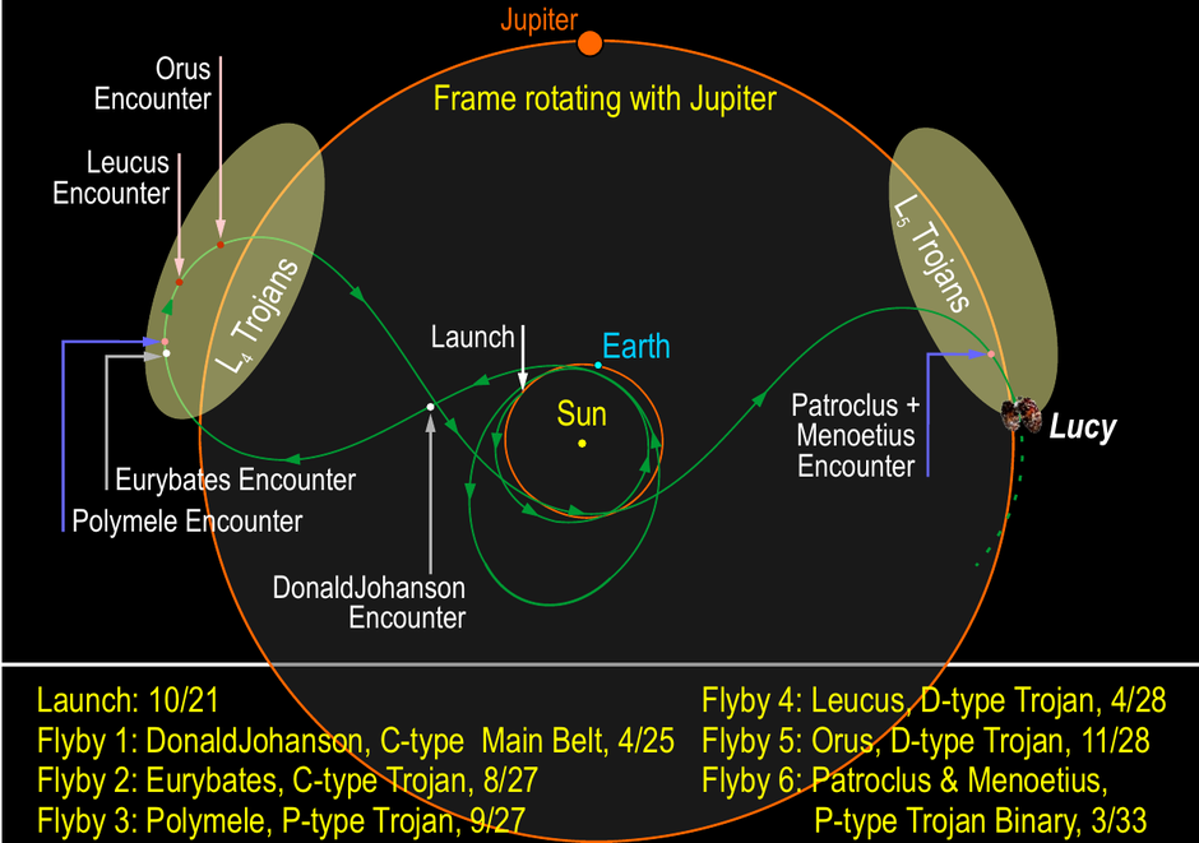 That means Lucy is alive and well and now there’s a lot of ground to cover before its reaches its first object of interest: Donaldjohanson, a space rock positioned in the asteroid belt between Mars and Jupiter. That flyby will occur in April 2025.

From there, Lucy will swing toward the Trojans, reaching four worlds throughout 2027 and 2028 in the Greek camp, the swarm of rocks leading Jupiter in orbit. Another Earth flyby will help propel Lucy to its final targets, Patroclus and its binary companion Menoetius, in the Trojan camp trailing Jupiter in 2033. In total, the spacecraft will cover four billion miles.

Lucy’s ambitious main mission won’t necessarily end with Patroclus and Menoetius, either. The spacecraft’s orbit will see it drift through the swarms for years to come. NASA has a good track record with extending missions — but you’ll have to keep your fingers crossed everything goes well for the next decade.

according to NASA News Related

Why (and How) You Should Invest in a Vacation Home

Snoochie Shy leaves I'm a Celebrity...Get Me Out of Here!

'The Voice' Instant Save: How to Vote for Your Favorite Performer

Jennifer Lawrence reveals why filming with Leo DiCaprio was ‘hell'

Australia will not send officials to Beijing Olympics: PM

© Saeed KHAN Protesters in Sydney call on the Australian government to boycott the 2022 Beijing Winter Olympics over China’s human rights record Australia will not send officials to the ... Read more »

Alternative Investments Expert: How to Protect Wealth After COVID

© kamiphotos/stock.adobe.com INVESTMENT For many investors near retirement age — or anyone concerned about protecting their wealth — the economic impact of COVID-19 echoed losses from the Great Recession. In ... Read more »

Remember what is real. Check out the new trailer for “The Matrix Resurrections” now and watch the film in Philippine cinemas January 12, 2022. © Provided by LionhearTV From visionary ... Read more »

A government department has admitted it held a Christmas “gathering” last December, when London was under Tier 2 coronavirus rules. © Getty Images PRI199715547.jpg The Department for Education said the ... Read more »

© Provided by Dot Esports Ahead of its launch, reports that players would be unable to go back and replay story missions after completing them in Halo Infinite started popping ... Read more »

© Provided by GamePur The Nintendo Switch may be one of our favorite Nintendo consoles ever, but it will run into the occasional error or two even with everything it ... Read more »

US eyes NordStream pipeline as Russian pressure point over Ukraine

© Odd ANDERSEN If Russia invades Ukraine, the United States wants to block the opening of the new $12 billion Nord Stream 2 pipeline that is to carry natural gas ... Read more »

© Provided by GamePur Whenever a new season of Apex Legends releases, players immediately start wondering what the new collection event theme might be. Well, the pirates have come to ... Read more »

When do FIFA 22 Prime Icons Come Out?

Prime Icons are some of the best cards you can obtain in FIFA, and currently, we are waiting for Prime Icons to be added to FIFA 22. We already have ... Read more »

US trade deficit narrows in October as exports jump

© Provided by Al Jazeera The United States trade deficit narrowed to $67.1bn in October, after hitting a record high the previous month, as a big rebound in exports helped ... Read more »

(Bloomberg) — The number of applications filed for foreign high-tech workers on H-1B visas dropped the most in at least a decade this year in the U.S. amid travel and ... Read more »

nitr0 transferred from 100T VALORANT roster amid reports of potential return to CS:GO

© Provided by Dot Esports 100 Thieves has announced today that it will be parting ways with Nicholas “nitr0” Cannella from its VALORANT roster, effective immediately. The team announced on ... Read more »

© Daniel Leal Alok Sharma, President of Cop26. PA The UK needs to push forward on delivering its climate goals in the same way it is asking other countries to ... Read more »

Over 2,000 players banned from Apex for teaming

© Provided by Dot Esports Cheating and teaming in Apex Legends has long been a major point of contention in the player community. Thankfully, after today, there are fewer cheaters ... Read more »

People wearing protective masks walk at market in Bucharest BUCHAREST (Reuters) – The Romanian government will ease some COVID-19 restrictions on Wednesday, eliminating a night curfew and an obligation to ... Read more »

Robert E. Lee statue in Charlottesville will be melted down into artwork

The Charlottesville City Council decided on Monday to give a statue of Confederate General Robert E. Lee to a local heritage center. The statue, which is bronze, will be melted ... Read more »

December 8, 2021 The U.S. has announced a diplomatic boycott of the upcoming Winter Olympics. What does that mean, and how has China responded? We’re remembering the Japanese attack on ... Read more »

Shop less and reduce, reuse and recycle this Christmas: how to reverse the cycle of buying and dumping in a landfill

People in Hong Kong can do their bit for the environment by giving away unwanted items; one way is through the Reduce Reuse Recycle Free Hong Kong Facebook page Everything ... Read more »

FILE PHOTO – Senate Finance Committee hearing on the nomination of Chris Magnus to be the next U.S. Customs and Border Protection commissioner WASHINGTON (Reuters) – The U.S. Senate approved ... Read more »

A Torrington man will be moved back to Connecticut from Vermont to face a federal charge that he kidnapped a girl and tried to take her into Canada. Christopher Constanzo, ... Read more »

Who can believe one word Jussie Smollett says?

Edinson Cavani has confirmed he is edging closer to a first-team return despite suggestions he is contemplating a Manchester United exit. The striker is yet to get a chance to ... Read more »

Australia WILL join a boycott of the winter Olympics in Beijing

© Provided by Daily Mail MailOnline logo Australia will join the US’s diplomatic boycott of the winter Olympics in Beijing.  The United States on Monday said its government officials will ... Read more »

Selena Gomez: I have a love-hate relationship with social media

© Provided by Metro Ross has teased a return to the soap (Picture: Rex/BBC) Ross Kemp is the latest EastEnders star of old to tease a comeback on the soap ... Read more »

A sweeping $1.9 trillion spending plan, known as the Build Back Better bill, is making its way through Congress and could make a key part of President Joe Biden’s economic ... Read more »

The National Defense Authorization Act, the annual must-pass piece of legislation that sets the policy agenda and authorizes almost $770 billion in funding for the Department of Defense, is set ... Read more »

PM has to make efforts to reach out to J&K: Mehbooba

© Provided by The Indian Express ACCUSING THE BJP government of running Jammu and Kashmir like a colony and treating it as a laboratory, PDP chief Mehbooba Mufti on Tuesday ... Read more »

MELBOURNE (Reuters) – Australian scientists and artists are looking to hold the world accountable for the Earth's future by creating an “indestructible” storage device to record humanity's handling of the ... Read more »

Yet another Miami-Dade County Public Schools student was arrested this week in a string of online threats of violence that have plagued the district all school year — and ramped ... Read more »

CL hits & misses: If not Liverpool, then who?

Caretaker beaten and abducted from Southwest Miami-Dade home, cops say. Have you seen her?

Outrage over Wilmington gunfire that killed one child, critically wounded another

Police searching for suspect in stabbing

Farrah Abraham claims she was attacked during Teen Mom special

Best planners for 2022: Get your diary organised for the new year

Don't Let Winter Cramp Your Style: Winterize Your Shoes With These Leather-Protecting Products

Clint Frazier has ‘electric' plans for fresh start with Cubs