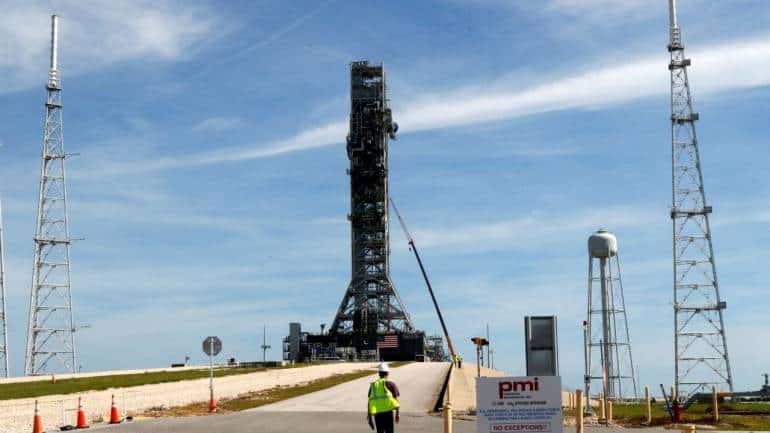 NASA said on October 23 that it is now targeting February 2022 for its uncrewed Artemis 1 mission. According to the space agency, the delay was caused by several reasons, including cost overruns, lawsuits and the COVID-19 pandemic.

The agency had plans to launch the test flight by the end of this year, with astronauts set to walk on the Moon by 2024.

“The February launch period opens on the 12th and our last opportunity in February is on the 27th,” AFP quoted Mike Sarafin, Artemis 1 mission manager as saying.

These potential launch periods are dependent on orbital mechanics and the relative position of the Earth with respect to the Moon. The mission duration is expected to be four to six weeks. The next windows are in March and April, added the news report.

The space agency is seeking to establish a sustainable presence on the Moon as well as use the lessons it learns to plan a crewed trip to Mars in the 2030s.

The Artemis program will see the first woman and first person of color step foot on the lunar surface. NASA will also deploy small satellites, known as CubeSats, to perform experiments and technology demonstrations.

Artemis 1 is the first step while Artemis 2 is scheduled for 2023 and Artemis 3 for the following year, when humans will walk on the Moon for the first time since 1972. Both missions are now likely to be pushed back, however.

NASA achieved a major milestone when it stacked the Orion crew capsule atop the SLS megarocket ‘just before midnight October 21,’ the space agency said in a recent statement.

Orion first flew into space in 2014, launched by a Delta IV rocket, making two circumnavigations of Earth and testing its heat shield on re-entry into the atmosphere.

But this time, NASA’s Sarafin said, the capsule will travel much faster and the temperature will be much higher when it returns from the Moon.

Artemis 1 has several objectives: to demonstrate Orion’s ability to return from the Moon and operate in deep space where it is “much colder than in low Earth orbit,” and to successfully recover the spacecraft, he added.

The mission also plans to study radiation and take selfies of the capsule with the Moon in the background.

Everyone Said The Same Thing About Spencer Rattler On Saturday Night

© Provided by The Spun Spencer Rattler playing for Oklahoma in a 2020 college football game. The Oklahoma Sooners dropped their second game of the season on Saturday night at ... Read more »

© Getty Images It was obvious early in this one that Stanford was going to do whatever it could to keep Kyren Williams from beating them early.  They tried to ... Read more »

From her green-painted homestead near the Belarusian border, Lithuanian pensioner Jadvyga Mackevic remembers the day she saw three migrants coming out of the forest and being detained. © PETRAS MALUKAS ... Read more »

Shark Black Friday deals 2021: Save 45% on this upright vacuum cleaner

This discount sucks… in a good way (iStock/The Independent) Black Friday has officially begun, and we’re well into the second day of the main event, with retailers offering great discounts ... Read more »

Arsenal’s season is going from strength to strength and the Gunners are hoping to translate their good work on the pitch to the transfer market. Manager Mikel Arteta and technical ... Read more »

The National Task Force against Coronavirus disease 2019 (Covid-19) clarified on Sunday that the decision to restrict arrivals from Hong Kong because of the Omicron variant is not yet final. ... Read more »

Barbados will spur others to ditch the Queen: experts

© JOE RAEDLE Ditching the British monarch is being seen as a final step on the long road to freedom after centuries of slavery and exploitation On a rainy night ... Read more »

Beverly Hills police and bomb squad were in a standoff with a motorist in a usually busy intersection of downtown Saturday night. Two police cruisers and the bomb squad's armored ... Read more »

The big picture: the decline and fall of a utopian social housing scheme

© Provided by Firstpost India vs New Zealand 1st Test, Live Cricket Score: Southee removes Agarwal, Jadeja in same over 10:45 (IST) OUT! Southee’s on a roll at the moment, ... Read more »

Chinese police have captured a North Korean prisoner who staged a daring escape from jail in October and had been on the run for more than forty days, authorities said ... Read more »

Where do we start with storylines for Sunday’s game between the Rams and Packers? Green Bay (8-3) is coming off a loss to Minnesota and hasn’t lost consecutive games since ... Read more »

Janhvi Kapoor is here to make our weekends a little more exciting. The actress shared a hilarious video, in which she can be seen recreating former Bigg Boss contestant, Pooja ... Read more »

BTS ARMYs Plan Jin's Advance Birthday Celebration, to Do This During Permission to Dance on Stage Concert

© Provided by News18 After a long wait, BTS ARMYs will finally get to see the septet perform live as the boys are back on stage with their Permission to ... Read more »

Shoojit Sircar reveals Varun Dhawan's October boomed on OTT: More people saw it there than when it released

Meet CCF, an Ayurvedic kadha for weight loss that also works as a complete detox

CCF… naam toh suna hi hoga! Nope! We promise you would be pleased to meet this one. Ladies say hello to CCF or the cumin-coriander-fennel kadha. Are you wondering why ... Read more »

© Provided by Zee News New Delhi: Salman Khan’s brother-in-law and actor Aayush Sharma has been basking high after the release of his most-anticipated film ‘Antim: The Final Truth’. He ... Read more »

© Provided by Pinkvilla Filmmaker Mahesh Bhatt and Soni Razdan’s younger daughter Shaheen Bhatt has turned a year older. She is celebrating her birthday today and there are wishes coming ... Read more »

Kim Kardashian and Pete Davidson looked 'happy' together, claims fan who clicked selfies with the duo in LA

© Provided by Pinkvilla Kim Kardashian and Pete Davidson are currently the talk of the town and a fan who ran into the duo at the Beverly Hills Hotel opened ... Read more »

© Provided by The Indian Express On Thursday, a Manchester United Supporters’ Trust (MUST) email landed in the inbox, urging fans to take a survey during the club’s hour of ... Read more »

Laura Reynolds has been flying for two decades and there “isn’t many places in the world” she hasn’t been. With in-depth knowledge of most destinations and a love for travel, ... Read more »

© Provided by Al Jazeera People walk inside Schiphol Airport after Dutch health authorities said that 61 people who arrived in Amsterdam on flights from South Africa tested positive for ... Read more »

The Central Board of Secondary Education (CBSE) on Saturday said that private candidates who wish to appear for the class 12 board exams 2022 can register from December 2. The ... Read more »

© Provided by Jagran English Bengaluru | Jagran News Desk: Karnataka, one of the worst-hit coronavirus states in India, is emerging as a hotspot of the infection once again after ... Read more »

© Provided by The Indian Express A 30-year-old journalist was duped of Rs 1.08 lakh by a cyber fraudster when she tried ordering liquor online. The journalist told police that ... Read more »

In a unique gesture, a Burhanpur man has built a house that is a replica of the famed Taj Mahal and gifted it to his wife. While speaking to ANI, ... Read more »

Assam government will spend close to Rs 3500 crore to provide relief to around 11 lakhs microfinance borrowers who are making regular payments to banks. The process will start from ... Read more »

The Enforcement Directorate (ED) has summoned Amazon’s Indian management, including its country head Amit Agarwal next week to its headquarters in Delhi, in connection with its disputed deal with Kishore ... Read more »

Lincoln Riley Postgame: 'I'm not going to be the next coach at LSU'