Jordan Spieth hits a stunning shot on the opening day of the Ryder Cup. The American hit the shot from a very precarious position on an extreme slope before he almost hurtled into Lake Michigan to avoid a massive bunker.

The grass on the side of the bank was also ankle high and Spieth was unable to see the part of the green he was aiming to hit the ball.

Despite being below the surface of the green, the three-time major winner managed to make solid contact with the ball which landed within a few feet of the hole.

Following his moment of magic, the 28-year-old commented on narrowly avoiding what could have been a horrific accident.

“I don’t think I exaggerated that fall, you know how steep that is,’ he said.

“Once I started moving, I was like, “I’ve got to keep moving until I find a flat spot.” “It’s one of those shots that you practice as a kid for fun and you don’t ultimately want to have it.

“And the chances of it going there – you could roll a thousand balls off the green and it’s not going to stay where it was.”

He added: “You know, it ended up right on a crown where it was a tough putt, and I think it’s maybe a situation, first one in wins, and we just kind of got a really tough break there.”

One of his opponents, Sergio Garcia, sang Spieth’s praises after pulling off a phenomenal shot.

The Team Europe star said: “I was clapping. I was hoping that he wouldn’t hurt himself, but he hit an unbelievable shot.

“I didn’t think there was a chance he could get it on the green.”

Sadly for Spieth, his putt did not result in a winning effort as teammate Justin Thomas failed to convert the putt.

They lost the point and lost the tie 3-1 to European pair Garcia and world number one John Rahm.

As predicted, Team USA got off to a strong start on Friday, first by winning three of the four morning matches before two more victories and two ties in the afternoon’s fourball rounds. 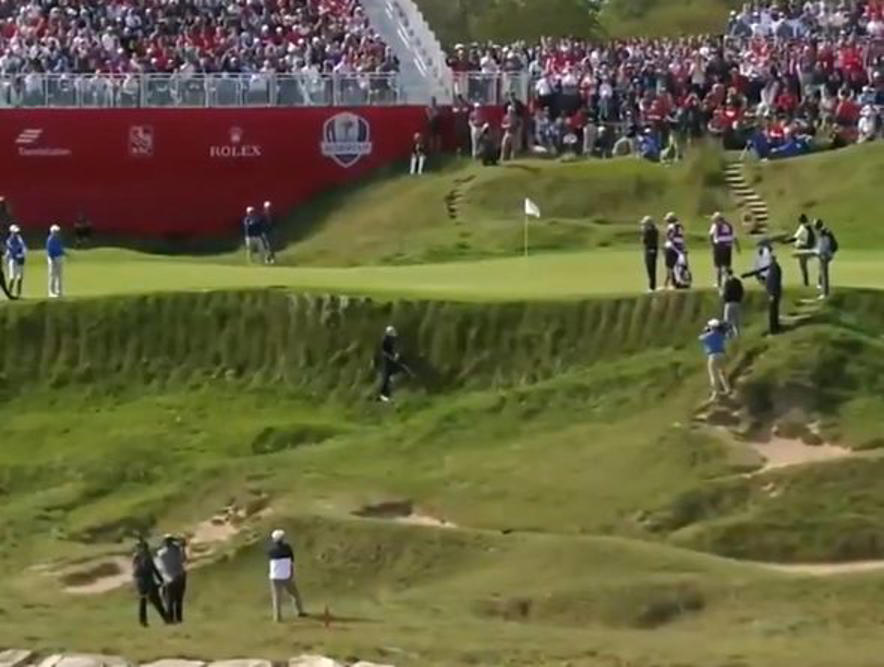 In the Saturday morning foursomes, Rahm and Garcia will once again form an all-Spanish pairing on Saturday morning, and will hope to repeat their Friday success when they come up against Brooks Koepka and Daniel Berger.

Tyrrell Hatton partners Paul Casey after his strong showing in Friday’s fourball, while rookies Viktor Hovland and Bernd Wiesberger team up in the third match.

Lee Westwood will once again line up alongside Matt Fitzpatrick, this time in the anchor match, but there is no place for Rory McIlroy or Ian Poulter.

Steve Stricker will field the exact same eight players as he did on Friday morning, the only difference being Koepka and Berger move to the first match, and Jordan Spieth and Justin Thomas will tee off third.

© Provided by Sports Illustrated Mark Stoops called a timeout with seven seconds to go on third-and-goal, and the Wildcats were able to convert for a touchdown to cover the ... Read more »

Dame Mary Berry has revealed she underwent surgery for a broken hip after tripping over in her garden. The former Great British Bake Off host, 86, spent 10 days in ... Read more »

© Raymond Hall/GC Images There are many things that make Selena Gomez happy. One of them is her infrequent use of social media to know what is going on in ... Read more »

© Provided by The Indian Express An ISKCON temple in Bangladesh was vandalised and a devotee killed by a mob — this was the fifth death since Thursday — and ... Read more »

© Provided by The Indian Express The operation to flush out militants hiding in forests in the border district of Poonch in J&K has claimed the lives of nine Army ... Read more »

Didn't change your Twitch password after the data leak? You should. Here's how

© Provided by Associated Press FILE – In this Aug. 8, 2017, file photo, Lilyana Allen, of Guam, uses a telescope to view Lake Tahoe from an observation platform at ... Read more »

Yusbin Diaz was charged with a DWI for the incident. Getty Images An off-duty FDNY firefighter was arrested Saturday morning for allegedly driving drunk and crashing a car in Brooklyn, ... Read more »

What the papers say – October 17

Revelations about the suspect arrested over the fatal stabbing of Conservative MP Sir David Amess lead most of Sunday’s papers. The Sunday Telegraph reports the suspect had previously been referred ... Read more »

© The Hill Arizona launches $36M program to help families pay utility bills The Arizona Department of Economic Security announced Friday that it is launching a program to provide $36 ... Read more »

A girlfriend and boyfriend in Virginia were arrested early this week over the death of the woman’s 88-year-old grandmother. New details shine a grisly light on the octogenarian’s brutal murder. ... Read more »

© Boy Santos, file DOH has final say on alert level – Abalos MANILA, Philippines — Following claims that Metro Manila mayors were not consulted on the downgrading of the ... Read more »

Conor McGregor and his extended family enjoyed a plush celebration in the Vatican City on Friday as his son Rian was christened. The UFC legend is currently nursing a broken ... Read more »

In a somewhat surprising report, Kelowna was ranked as having the fourth-most expensive rental prices in the nation. © Google Maps According to website Zumper.com, the median price of a ... Read more »

THE brother of a British man murdered with his family in the Alps has accused French police of a cover-up. Zaid al-Hilli says the family was just in the wrong ... Read more »

TROOPS face a new Battle of the Bulge — with waistlines measuring 55in. Many have been prescribed diet pills, with others kicked out of the armed forces for being too ... Read more »

Tom Coughlin was going to finish the damn game, even though his left leg was begging him to quit. The Giants, coached by Coughlin, were playing the Jets on Christmas ... Read more »

Casey Martin, the Oregon golf coach who successfully sued the PGA Tour for the right to use a cart because of a rare circulatory disease, had his right leg amputated ... Read more »

© Provided by The Indian Express In a rare scenario, vice-chancellor of a private university will preside over the 67th convocation of Gujarat Vidyapith on October 18 with the name ... Read more »

© Provided by The Indian Express Despite India’s efforts to reduce dependence on Chinese imports amid an increased emphasis on self-reliance as well as escalating tensions along the border, the ... Read more »

© Provided by ABC NEWS Sawfish numbers have been in decline in the Normanby River systems for some time, say the Laura Rangers. (Supplied: Sharks and Rays Australia) A rare ... Read more »

Metroid Dread: How to unlock all gallery and ending rewards

© Provided by GamePur Metroid Dread tells the story of Samus Aran’s adventure on Planet ZDR, but a lot happened on the alien world before she even arrived. To learn ... Read more »

Diaz gets another gold – on her finger

© Provided by The Manila Times ENGAGED Olympic gold medalist Hidilyn Diaz and her coach Julius Naranjo pose for a photo after she said yes to Naranjo’s proposal of marriage, ... Read more »

A LAWYER of the Buhay Hayaang Yumabong (Buhay) Party-list on Saturday dared those who reportedly withdrew their support for presidential aspirant Sen. Emmanuel “Manny” Pacquiao and his running mate and ... Read more »

The Chinese film beating Bond at the box office

© Getty Images The Battle at Lake Changjin made over $633m at the box office in just two weeks The biggest movie in the world right now is not the ... Read more »

Pump the brakes on those parade plans. Hold off on anticipating any June celebration. The Nets may be considered the preseason favorite despite the potential season-long absence of Kyrie Irving, ... Read more »

Dust storms rolled through parts of the Brazilian state of Sao Paulo on October 14 and 15. Brazil’s National Institute of Meteorology reported the sandstorms, while similar to the ones ... Read more »