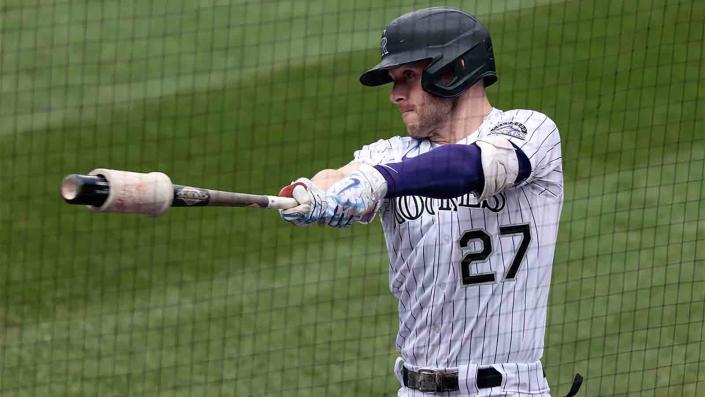 The Boston Red Sox are being linked to one of the top middle infielders on the free-agent market.

On a recent episode of the “Big Time Baseball” podcast, MLB Insider Jon Heyman included the Red Sox on a list of three teams that are in the mix to sign Trevor Story.

Should the Red Sox pay up for either Schwarber or Suzuki?

“Story, I have heard three teams — Seattle, Houston and Boston,” Heyman said. “So it would be interesting to see with Boston. Obviously he could start out at second base potentially, and we'll see what goes on from there.”

Story, 29, has spent all six of his MLB seasons with the Colorado Rockies. The two-time All-Star has only played shortstop at the major league level, so a switch to second base would be necessary for either him or current Sox shortstop Xander Bogaerts. Adding Story could also help the team prepare for the potential departure of Bogaerts, who has a player option for the 2023 season.

The 2021 campaign was a down year by Story's standards, but he still managed to belt 24 home runs and post a .801 OPS. His offensive production makes him an intriguing option for Boston after chief baseball officer Chaim Bloom expressed his desire to add a right-handed bat.

The Red Sox won't be able to sign or even reach out to Story — or any other players — until MLB and the players association settle on a new collective bargaining agreement. A lockout was implemented at midnight Thursday, marking the ninth work stoppage in the league's history and its first since 1994-95.

What TV channel is Brentford vs Manchester United on? Live stream details and kick off time

Rangers set out their stance over potential Celtic call-off

© Photo by Jose Breton/Pics Action/NurPhoto via Getty Images Sergino Dest continues to be linked with a Barcelona exit in the January transfer window but the player’s camp continue to ... Read more »

The team’s top pass-catcher in 2000 comes off a shortened season. But have Juju Smith-Schuster’s days with the Pittsburgh Steelers come to an end? © Provided by Fansided Late last ... Read more »

There was a lot that went wrong for the Philadelphia 76ers in Monday’s 117-98 loss to the Washington Wizards. They had issues getting into their offense, they could not get ... Read more »

The Warriors announced on Sunday that defensive stalwart Draymond Green would miss at least two weeks of action due to lingering calf and back injuries. Coach Steve Kerr said the ... Read more »

J.J. Watt is not the only player the Arizona Cardinals received positive injury news on before tonight’s playoff game against the Los Angeles Rams. © Provided by The Spun Arizona ... Read more »

ANDY MURRAY is in action at the Australian Open for the first time since 2019 this morning. And in his way in the first-round clash is world No 21 Nikoloz ... Read more »

Determined Manchester United will move for John McGinn this summer in a bid to bulk up their midfield, according to The Times. The 27-year-old Aston Villa star has long been ... Read more »

The Los Angeles Rams are attempting to reach the divisional round for the second year in a row. They host the Arizona Cardinals tonight for a wild-card matchup, the final ... Read more »

© Provided by Football League World FA Cup Second Round – Burton Albion v Port Vale Bolton are gearing up for another player departure with the news that Dennis Politic ... Read more »

Joe Rothwell’s third goal of the season was enough to guide Blackburn to a 1-0 victory over struggling Cardiff and move them closer to the automatic promotion places. With league ... Read more »

A stoppage-time winner from Matt Crooks saw Middlesbrough come from behind to beat Reading 2-1 at the Riverside Stadium. Andy Carroll opened the scoring for the visitors after 67 minutes ... Read more »

Fiorentina 6-0 Genoa: Vincenzo Italiano's side move ahead of Roma

Fiorentina returned to winning ways on Monday evening after cruising past Genoa in their Italian top-flight clash.    Fiorentina – who have now overtaken Roma in the Serie A table – put six ... Read more »

Bolton Wanderers has confirmed attacker Dennis Politic has been recalled from his loan spell at Port Vale after a bid for his services from another club was accepted. The 21-year-old ... Read more »

Aleksandar Mitrovic propelled Fulham to the top of the Sky Bet Championship as the Cottagers twice came from behind to claim a comprehensive 6-2 victory over Bristol City. Knocked out ... Read more »

Kal Naismith scored with the last kick of the game in the 97th minute as Luton produced a stunning 3-2 victory over Bournemouth, who drop important points in their automatic ... Read more »

Djokovic could now be restricted to playing Grand Slams at Wimbledon

Wimbledon is starting to look like the final refuge for Novak Djokovic after the French government suggested he would be barred from the French Open. The Sports Ministry in Paris ... Read more »

Ipotesi da A per Luigi Sepe