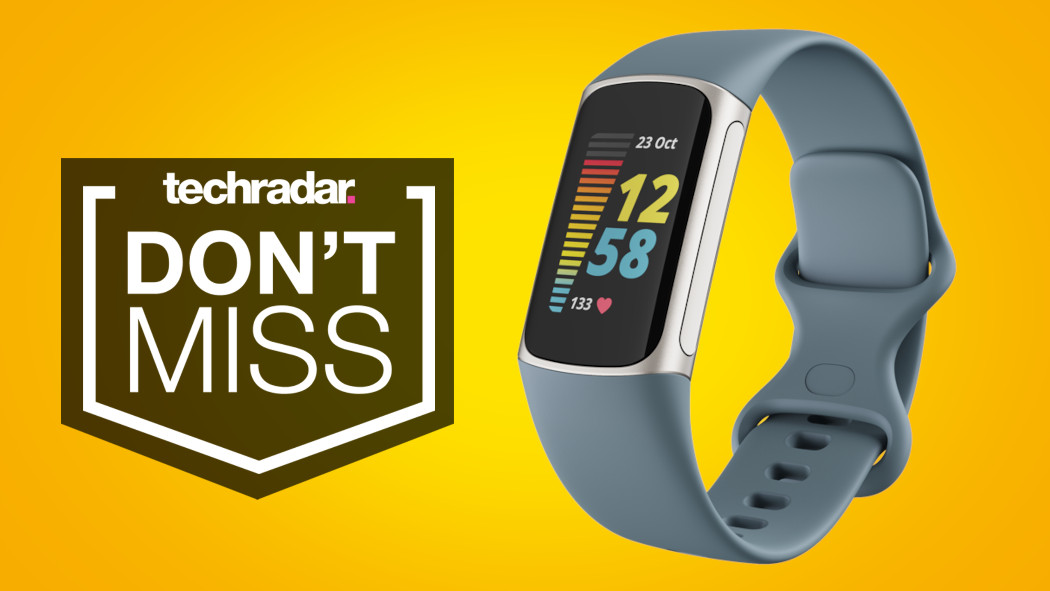 The Fitbit Charge 5 is down to just $129.95 at Amazon right now – the same as its Black Friday sale price, and a saving of $50. It’s the cheapest we’ve ever seen this feature-packed fitness tracker, which would make a great Christmas gift.

The Charge 5 was only released in September, and it’s unlikely to become cheaper any time soon. It’s Fitbit’s most advanced tracker to date, with on-board GPS, stress monitoring, an ECG sensor, all-day heart rate monitoring, and sleep tracking all packed into its slim case.

Not in the US? Scroll down for more Fitbit deals in your region.

Fitbit Charge 5: $129.95 at Amazon
The latest Fitbit is back down to its Black Friday price at Amazon for a limited time. It's a powerful fitness tracker that's well suited to anyone who's starting to get serious about working out but doesn't yet need a fully-fledged sports watch. It's comfortable to wear, practical, smart, and cheaper than ever right now.

One of the Charge 5’s standout features is its ability to track changes in stress by measuring changes in your skin’s conductivity caused by adrenal activity. Place your fingers on the edges of the watch’s case for a moment and you’ll be presented with a score that correlates with your stress level. Feeling the pressure? The watch can also lead you through a breathing exercise to help you calm down.

It’s not a medical device, and can’t be used to diagnose a condition, but the Charge 5’s ECG sensor can detect signs of atrial fibrillation (an irregular heartbeat) that warrant investigation from your doctor. The Fitbit mobile app can use data from the watch to generate a PDF report that you can share/

The Charge 5 also comes with a free trial of Fitbit Premium, which gives you access to a huge catalog of workouts, meditation classes, and mindfulness sessions – plus nutrition advice and other tips on healthy living.

It’s an impressive package, and earned a place high up in our guide to the best fitness trackers.

If the Fitbit Charge 5 isn’t the right device for you, or you live outside the US, we’ve rounded up the very best prices on the full range of Fitbit smartwatches and fitness trackers where you are.

Save hundreds on Kate Spade purses ahead of Valentine's Day

Theory: We're running out of time if we ever want to meet aliens

‘Not just about Ukraine': Why Romania is one of Kiev's strongest supporters in Russia dispute

The 5 best deals you can shop today from Macy's, Kate Spade and Sur La Table

‘Don't Look Up': an actual comet wiping out Earth would be avertable, scientists say

Joe Danger back on mobile thanks to one dad's heartfelt plea

Hello Games has remastered and re-released its Joe Danger video game for iOS; a decision prompted by a letter the studio received from a father who specifically requested it be ... Read more »

Best Buy’s Super Bowl TV deals are live, which means you can snag a premium display at a record-low price so you can watch the big game in style. One ... Read more »

Last month, Google announced an updated policy for its cloud storage service, Google Drive. Under the new policy, the tech giant can automatically flag and restrict access to the files ... Read more »

Coming soon: Nutrition labels, but for your internet service

The FCC voted Thursday to require special notices at the point of sale for broadband service, an industry often criticized for surprise fees. Read more »

Samsung Galaxy S22 Ultra could be out of stock for months

If you’re thinking of buying the Samsung Galaxy S22 Ultra then it might be worth making a decision as soon as it goes up for pre-order, because the phone could ... Read more »

Philips 2022 TV line-up: everything you need to know

Philips has announced its new 2022 TV line-up, and there’s a lot to sink one’s teeth into. A wide range of TVs will be made available throughout the year, including ... Read more »

G Suite users upset at Google’s recent move to make them pay for their office software could be in luck thanks to a potential loophole. The company recently announced that ... Read more »

— Recommendations are independently chosen by Reviewed’s editors. Purchases you make through our links may earn us a commission. Relationships may come and go, but best friends last forever (or ... Read more »

UBS Acquires Wealthfront for $1.4 Billion in Its Push for Young Investors

On Wednesday, Swiss bank UBS announced that it had acquired digital-investment platform Wealthfront for $1.4 billion. The bank noted that this acquisition will aid its growth ambitions in the U.S., ... Read more »

A new Crysis game is under development, confirms Crytek

Crytek, the game studio behind the graphic-heavy first person shooter series Crysis, is working on a fourth Crysis mainline game. The game developer announced it on Twitter and on ita ... Read more »

The big antivirus players could soon be in some serious trouble

The $2 billion global antivirus market may be huge, but its size doesn’t necessarily guarantee its survival, a new report has hinted. After surveying almost 1,000 U.S. adults, Security.org found ... Read more »

A new model of IBM’s Z Series mainframes is set to arrive later this year, the company has confirmed. Expected to arrive halfway through 2022, IBM’s z15 successor was confirmed ... Read more »

QNAP NAS devices across the globe have been hit by a widespread cyberattack after the DeadBolt ransomware group began to encrypt the network-attached storage devices. QNAP NAS users reported finding ... Read more »

Epic Games is creating a new studio to make “original standalone experiences” that aim to “push the boundaries of graphics and game development forward”, according to an official blog post. ... Read more »

Facebook unit WhatsApp has been given until the end of February to explain changes to its privacy policy and whether this complies with EU consumer protection laws after complaints from ... Read more »

Looking for ways to work smarter and be more productive in 2022? You need software that will help you stay on the cutting edge and work more seamlessly than ever. ... Read more »

A new use-case for cryptocurrency is booming, particularly in parts of Asia, and it’s gaining traction in other parts of the developing world. Not only is “play-to-earn” a new source ... Read more »

E-commerce giant Amazon has shut down a controversial influence campaign in which it paid its employees to tweet nice things about the company, Financial Times reported on Thursday.Employees at the ... Read more »

Intel posts record quarter, but why analysts are not happy

HP, Lenovo may be working on Chromebooks with RGB keyboard, this is what it means

HP is reportedly planning to launch a Chromebook with RGB lighting keyboard under its Omen lineup. According to a report by 9to5Google, Google has been preparing its operating system for ... Read more »

Why is crypto down so much? Uncertainty in traditional markets and Fed concerns, experts say

Over the past week, the cryptocurrency market has experienced massive drops, reaching lows not seen in months. According to CNBC, Bitcoin plunged below $33,000 on Monday, the lowest it’s been ... Read more »

Some iPhone 14 models might not have a SIM card slot

We’re expecting big changes for the iPhone 14 range, and one of those changes might affect the humble SIM card, as the iPhone 14 might not have a removable one ... Read more »

This smart TV is on sale for just $200 at Amazon Canada: 'Worth every penny':

This smart TV is on sale for just $200 at Amazon Canada (Photo via Amazon) Yahoo Lifestyle Canada is committed to finding you the best products at the best prices. ... Read more »

The video giant has added more rules around Covid-19 content as the pandemic has worn on. Read more »

This new Zoom feature could save you from an embarrassing blunder

Zoom has unveiled a series of new features for its video conferencing software, one of which could prevent users from making a serious workplace faux pas. As explained in a ... Read more »

To celebrate Horizon Forbidden West going gold, Sony and Guerrilla Games have finally shared footage of the PlayStation 4 version. A brief clip can be seen on YouTube via the ... Read more »

A leaked photo has shed further light on Intel’s Arc Alchemist graphics cards, and specifically the memory configuration of one of these incoming GPUs. The image, shared on Twitter by ... Read more »

Two Point Campus opens its doors in May, and launches day one on Xbox Game Pass

Sega and Two Point Studios have announced that Two Point Campus, the successor to 2018’s Two Point Hospital, will release on May 17 for consoles and PC. Not only that, ... Read more »

Windows 11 Android support had a rocky start and after delaying the feature a couple of times Microsoft finally started testing it in the Windows Insider Preview beta. While the ... Read more »

Garena has launched a special video featuring sports icon Neeraj Chopra. The Free Fire Stories Gold Edition video has Neeraj rolling back the years as he talks about his own ... Read more »

According to data acquired by financial news portal Finbold, between October and January, the number of Bitcoin addresses holding over $1 million has reduced by 28,186 or 24.26 per cent. ... Read more »

Spelling errors may soon be a thing of the past for Microsoft Edge users thanks to a new update coming to the software. The company has revealed it is working ... Read more »

If you’re on the hunt for the best crossplay games, then you’re in the right place. Crossplay games are growing in number by the day, meaning that anyone hoping to ... Read more »

Sheridan Smith takes on harrowing role in ITV's No Return

FIFA 23: everything we know so far

China Unicom's authorisation to operate in US revoked by regulator

Google Maps give you new way to save and share your home address, Plus Codes

Yes, Metroid Prime 4 is still in development, according to new job ad