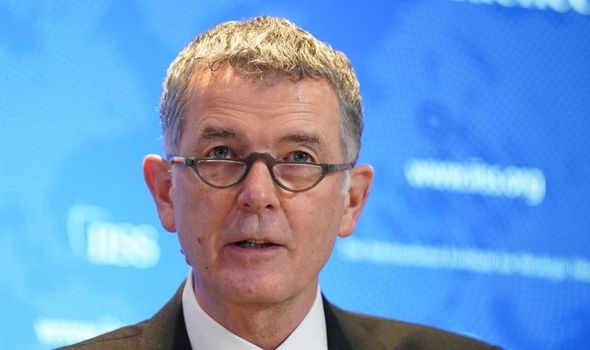 Richard Moore will say terrorists, organised crime gangs and hostile states are wreaking havoc in both the physical and digital worlds.

The Chief of the Secret Intelligence Service says this means MI6 must tap into the global IT industry because Beijing, Moscow and Tehran all want to develop super computers to predict their enemies’ next moves.

This means Britain must make advances in similar technologies, Mr Moore will say. He is expected to tell the International Institute for Strategic Studies: “Unlike Q in the Bond movies, we cannot do it all in-house.

“I cannot stress enough what a sea-change this is in MI6’s culture, ethos and way of working.

“We have traditionally relied primarily on our own capabilities to develop the world class technologies we need to stay secret.”

Prime Minister Boris Johnson said this month in a speech that he has “set the ambition” of UK scientists building a quantum computer to “secure the single biggest share of a global quantum computing market by 2040.”

The machines instantly allow vast swathes of data to be analysed and could be critical in wars.

China is said to be trying to crack internet encryptions with quantum computers by the end of this decade.

And Russia has indicated it wants to be a world leader in AI technology.

Mr Moore is expected to say: “Our adversaries are pouring money and ambition into mastering artificial intelligence, quantum computing and synthetic biology, because they know that mastering these technologies will give them leverage.”

© Provided by Zee News Dubai: Yemen`s Iran-aligned Houthi group attacked the United Arab Emirates in what it said was an operation using missiles and drones, setting off explosions in ... Read more »

SEOUL: North Korea has fired two suspected ballistic missiles, South Korea’s military said Monday, in what would be the nuclear-armed country’s fourth weapons test this month. As talks with the ... Read more »

THE National Bureau of Investigation (NBI) on Monday claimed to have foiled an attempt by alleged Eastern Visayas drug lord Rolan “Kerwin” Espinosa and two others to escape from the ... Read more »

© Provided by Zee News New Delhi: Maharashtra Congress President Nana Patole landed himself in trouble on Monday (January 17, 2022) after a video of him saying he can ‘beat ... Read more »

AiAi delas Alas Elsa of Arendelle who? AiAi Delas Alas just proved that the cold never bothered her anyway as she went and danced comfortably in a bodysuit while it’s ... Read more »

© Provided by Preview.ph Among many other things, Gabbi Garcia is undoubtedly a fashion girl. Whether she’s going on a simple brunch with beau Khalil Ramos, or is performing on ... Read more »

DepEd Sec. Leonor Briones at Jan. 17, 2022 briefing The Department of Education (DepEd) has recommended the progressive expansion of face-to-face classes in areas under alert levels 1 and 2. ... Read more »

© Provided by Khaleej Times Agencies file Kathak maestro Pandit Birju Maharaj has passed away. He was 83 when he breathed his last. The news of his demise was confirmed ... Read more »

The Department of Health reported 37,070 new Covid-19 cases on Monday, pushing the active caseload to 290,935, or nine percent of the 3.242 million total infections. The department said that ... Read more »

In the latest setback for abortion clinics that have challenged in federal court Texas’ six-week ban on the procedure, the 5th US Circuit Court of Appeals said Monday night that ... Read more »

Just 10 years after carrying out the deadliest peacetime attack in Norway, right-wing extremist Anders Behring Breivik will on Tuesday ask a court for parole, a request widely expected to ... Read more »

The simple way you can totally transform your look

© Motivate Publishing ColorVision lenses IN PARTNERSHIP: When it comes to beauty we focus on our brows, lashes, skin, lips and more, but rarely do we focus on how we ... Read more »

SEOUL, Jan. 18 (Yonhap) — South Korea’s auto exports rose 8.6 percent on-year in 2021 on the back of the growing popularity of local brands in the global market and ... Read more »

Cyril Gane buckled his trainer Fernand Lopez’s leg with a heavy kick as he completes his preparations for his heavyweight clash with Francis Ngannou. The French star will take on ... Read more »

A disgusted Victorian doctor has revealed how a patient called 000 claiming under the guise of suffering chest pains just so they could get a PCR test done ‘quickly’. The ... Read more »

Charlton’s recruitment chief Steve Gallen has revealed how the League One club persuaded Birmingham City and Chuks Aneke to go through with a transfer which took the striker back to ... Read more »

CELEBS Go Dating fans have slammed “rude and disgusting” Chloe Brockett after her disastrous first date on the E4 reality show. The celebrities were treated to their first blind dates ... Read more »

BRITS can now get their hands on tickets for this year's Trooping the Colour – but only if they're very lucky. The ballot has opened for the iconic event, which ... Read more »

GRAND Designs truly opens our eyes to some incredible properties, and this Scottish abode is no exception. Kevin McCloud has travelled up and down the country in search of the ... Read more »

Thomas Tuchel has urged Armando Broja to keep on making a statement at Southampton as rumours begin to swirl regarding his Chelsea future. The Albanian striker has shone at St ... Read more »

BRADLEY Walsh is set to return to our screens as Blankety Blank is renewed for another season. After a successful first series on BBC One, the re-booted show has proved ... Read more »

AAP to announce CM face for Punjab Assembly polls today, will Bhagwant Mann be the choice of people?

KATIE Price yells “yeah baby” as he she gets to work spray painting her furniture in a new teaser for her Mucky Mansion series. The 43-year-old doesn't mind getting her ... Read more »

Opinion: Celtic invincible should have stayed with the Hoops

A Celtic invincible of season 2016/17 seems to be on the move, as Sky Sports is reporting that Patrick Roberts is set to join Sunderland on loan for the second-half ... Read more »

Ant McPartlin stopped to speak to fans and pose for pictures as he left The London Palladium alongside co-host Declan Donelly following Britain’s Got Talent auditions. The first round of auditions kicked ... Read more »

Liverpool will hope to secure they first final appearance at Wembley in six years when they travel to Arsenal this week. The Reds warmed up for the game with a ... Read more »

EXCLUSIVE: Shady criminal past of Charlise Mutten's step-dad as it is revealed he and missing nine-year-old's mum were BOTH behind bars before they hooked up - as his ute is seized by cops

Charlise Mutten's stepdad is a convicted serious drug offender who is on parole He was released from prison after being sentenced to more than six years jailHer mother, meanwhile, was convicted of dangerous driving occasioning deathShe also spent time in jail after a fatal car accident while she was high on methCharlise has been missing for six days and the Blue Mountains search is ongoing Do you know more? Email brittany.chain@mailonline.com  Read more »

Video: Tom Sandoval trades in the cocktails for a microphone as he SINGS cover tracks with his new band Tom Sandoval and the Most Extras

Hawaii Gov. David Ige plans to require tourists be boosted against COVID in order to avoid the state's five-day quarantine requirementHis team is currently working to determine what 'actions are necessary' to implement the booster shot requirement in the state's Safe Travels programUnder the current guidelines, passengers are required to have both doses of Pfizer or Moderna or one dose of Johnson & Johnson to avoid quarantine A negative COVID test taken within one day of travel is also acceptableIge said the new policy will not go into effect for at least two weeks, giving travelers the chance to either get boosted or adjust their plans accordingly He is also talking to county mayors about requiring booster shots for access to restaurants and events, but says that decision will be made by local officials Read more »

Video: Celebs Go Dating fans brand TOWIE star Chloe Brockett 'RUDE' and say her date was being 'generous' by scoring their dinner a six out of 10

© Provided by The Times of India NEW DELHI: The Supreme Court on Monday chided states and Union Territories (UTs) for not doing enough to identify and rehabilitate children who ... Read more »

© Provided by Khaleej Times A fire that broke out in the on Monday morning “resulted in a short disruption for a small number of flights”. An Etihad Airways spokesperson ... Read more »

© Provided by The Times of India NEW DELHI: In a setback for Devas Multimedia, which signed a controversial agreement with Isro’s commercial arm Antrix in 2005, the Supreme Court ... Read more »

How workforce and technology will converge in 2022

Aadhaar Card Update: Is Your Aadhaar Number Fake? Here's How you can Check it

COVID-19: Sturgeon under pressure to ease restrictions in Scotland

Cognizance of offences taken against 5 in coal block scam case