Talk about a sweet surprise!

On Saturday, Spice Girls star Melanie “Mel C” Chisholm, aka Sporty Spice, delighted concertgoers at the 8th Annual We Can Survive concert at the Hollywood Bowl, when she joined Chris Martin onstage for a rendition of the girl group’s song “2 Become 1.”

Prior to the moment, Martin, 44, teased fans, revealing one of Coldplay’s dreams was to perform with a member of the Spice Girls. After he instructed fans to put that particular wish into the universe, Chisholm, 47, walked out seconds later to cheers from the audience. The pair then wowed the crowd with their duet of the ’90s hit.

On Sunday, Chisholm told her Instagram followers that the performance was a last-minute proposal from Martin.

“🤩What a fantastic, unexpected night!” she wrote. “😜 I gave Chris a text to tell him we would be coming to his @imlistening @audacy #wecansurvivegig, at the @HollywoodBowl and the next thing I know, he’s on FaceTime while I’m in the nail salon, asking me to come up on stage with him!”

She continued, “😍 Well, what could I say to an offer like that! Thank you @coldplay for such an amazing night and experience. Hopefully I can get back to @hollywoodbowl soon with three (maybe four!) certain ladies for company!” 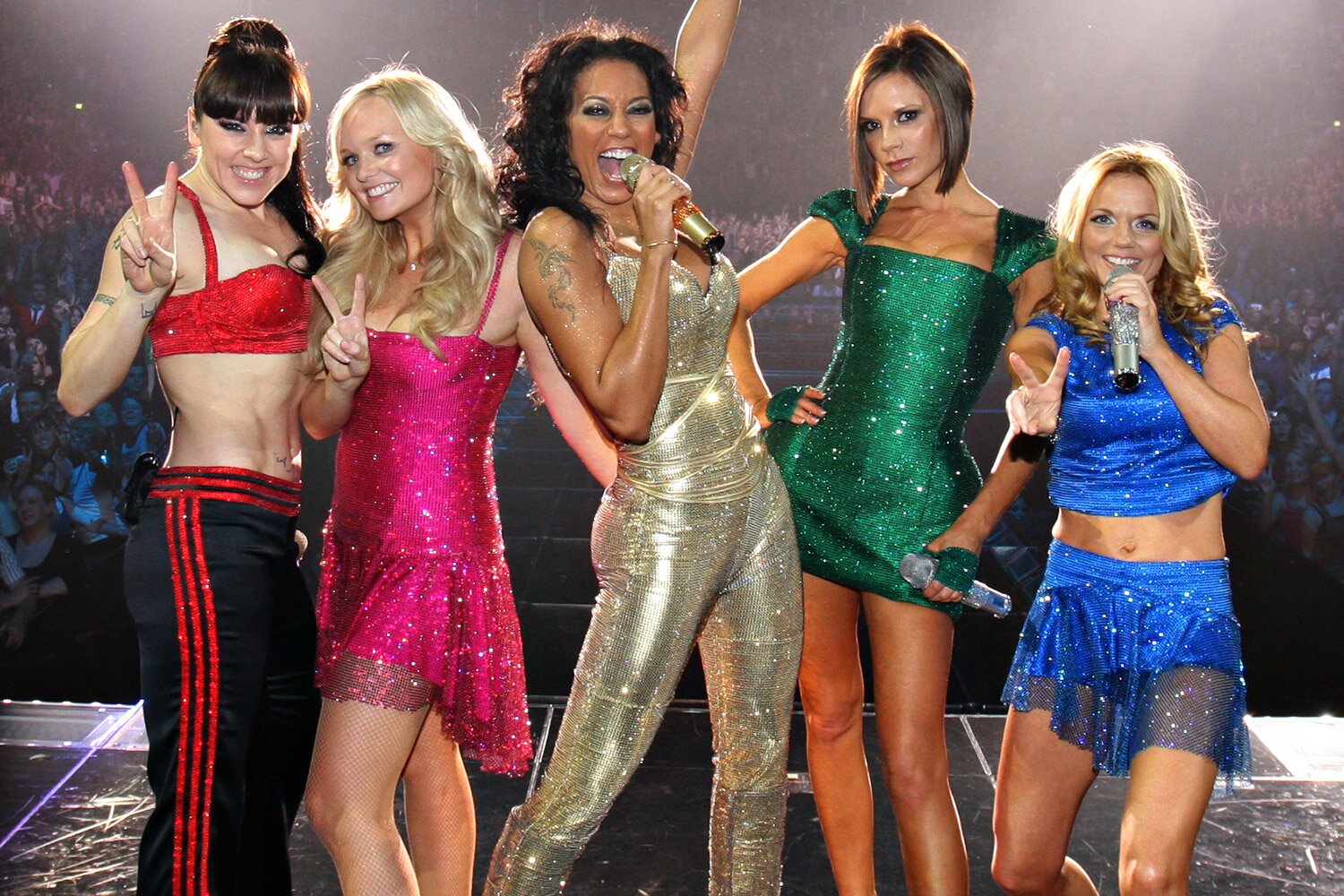 RELATED: Melanie C Says the Spice Girls Are ‘Working on’ Getting Victoria Beckham to Join Them for a Tour

Last week, Chisholm was eliminated from Season 30 of Dancing With the Stars, however, the singer opened up to PEOPLE (the TV Show) about going back on tour with the Spice Girls — this time, with Victoria Beckham, aka Posh Spice, onboard.

“At the moment, it’s only the four of us,” she explained. “We’re working on Victoria. She might be sucked into the idea at some point.”

The Spice Girls, comprised of Chisholm, Beckham Melanie “Mel B” Brown, Emma Bunton and Geri Halliwell, last hit the stage together on their 2019 reunion tour — but the fashion designer, 47, did not join.

RELATED VIDEO: Mel C. Jokes Spice Girls Are ‘Working on’ Victoria Beckham to Get Back on Stage With Them

“This has to happen,” Chisholm also told Entertainment Tonight. “We talk about it constantly. We did the shows in 2019, the plan was to continue on. Of course, the world has been in such turmoil, but the plan beyond this is to get out there when it’s safe, when we can do it. What’s tough is there are so many artists that want to get out there, and there are only so many venues, so we’re all kind of queuing up going, ‘I want to! I want to!'”

Never miss a story — sign up for PEOPLE’s free daily newsletter to stay up-to-date on the best of what PEOPLE has to offer, from juicy celebrity news to compelling human interest stories.

Chisholm’s revelation comes ahead of the Oct. 29 release of the Spice 25, a deluxe edition of the girl group’s debut album in honor of their 25th anniversary.

“There’s some demos, some remixes and there were lots of silly things that went on in the studio back in the day,” she told PEOPLE. “It was wild. So many things happened in such a short space of time that a lot of us have forgotten things.”

11 trendy pairs of women's flared pants to wear this winter

Henry and Mathieu among 32 NFL Man of the Year nominees

Man gets jail time for breaking into Bridge Marina

S10 goes to Eurovision Song Contest for the Netherlands

Hope, sadness as volunteers search for victims of Indonesian volcano

FILE PHOTO: Silhouettes of mobile users are seen next to a screen projection of Instagram logo in this picture illustration DUBLIN (Reuters) – Ireland's data regulator has completed a draft ... Read more »

Visitors are seen at the Intel booth during the China Digital Entertainment Expo and Conference, also known as ChinaJoy, in Shanghai (Reuters) – Intel Corp shares surged 7% on Tuesday ... Read more »

Review: Boy band drama meets romance in ‘If This Gets Out'

US trade deficit narrows in October as exports rebound

The Associated PressIn this April 9, 2021 photo, cargo containers are shown stacked near cranes at PortMiami in Miami. The U.S. trade deficit narrowed to $67.1 billion in October, after ... Read more »

A high schooler has been arrested after he allegedly caused a classmate’s serious injuries in a planned attack at a party, Texas cops say. The arrest of 17-year-old Reid Mitchell ... Read more »

— Recommendations are independently chosen by Reviewed’s editors. Purchases you make through our links may earn us a commission. Christmas is less than a month away, which means the holiday ... Read more »

Stocks jumped on Tuesday to extend gains from earlier this week, with volatility stemming from concerns about the Omicron variant at least momentarily abating. The Dow advanced by about 1% ... Read more »

Jordan Turpin didn't know which part of the street was for walking. “I was actually on the road, because I didn't know about the sidewalks,” the 21-year-old told ABC News' ... Read more »

Fashion trailblazer Virgil Abloh was remembered Monday by family, friends and A-list stars who stepped out in droves to mourn the late Louis Vuitton director, who died Nov. 28 at ... Read more »

A 12-year-old girl was shot while with a group of people in the Loop this weekend, Chicago police said Monday. The girl had been standing in the 100 block of ... Read more »

Jimmy Kimmel on Monday referenced Donald Trump’s infamous “Access Hollywood” tape to rip the former president over his alleged spreading of the coronavirus. Trump may have had close contact with ... Read more »

John Phillips/Getty Images Prince Harry and his father Prince Charles have barely spoken in eight months and Charles will be “devastated” at the prospect of being “further ostracized” from his ... Read more »

Four get prison for prostituting girl, 13. They sold 100 ‘out calls' in a month in South Florida

Over a single month, a local ring advertised a 13-year-old girl online for prostitution and used her for at least 100 commercial sex acts throughout South Florida, authorities say. Now, ... Read more »

'I feel like I'm walking on air': These women's snow boots are on sale for only $42

Police say shots were fired through the window of the Philippe-Panneton Library Monday night. (Kate McKenna/CBC – image credit) An 18-year-old man is expected to survive after being shot through ... Read more »

A Florida jury found that Craig Wright did not owe half of 1.1 million Bitcoin to the family of David Kleiman, who was his business partner. Read more »

The family of Emmett Till have expressed their disappointment after the Department of Justice closed its re-investigation of the 1955 lynching of Till without filing any new charges. Till, a ... Read more »

Delphi murders: What we know and don't know 4 years after Abby and Libby were killed

Four years ago, two Indiana girls went for a walk in the woods on a warm February day. Abigail Williams, 13, and Liberty German, 14, never returned to a prearranged ... Read more »

This Man Peed Out A Kidney Stone, His Girlfriend Shared It Online, And It Has Unlocked A New Fear For Millions Of People

Hello internet. Meet Lauren and Solomon. They're both 37 and both Virgos — born two days apart. This content is not available due to your privacy preferences.Update your settings here ... Read more »

Man in Germany suspected of killing 4 relatives and self

BERLIN (AP) — German investigators said Tuesday that a man suspected of killing his family and then himself left a note indicating that he was afraid of being arrested after ... Read more »

Fort Worth police are investigating a shooting Monday night that left two injured, with one in critical condition. The shooting occurred around 8:45 p.m. near the 8600 block of Las ... Read more »

On a night in which it was windy and cold and difficult to throw, the New England Patriots and coach Bill Belichick opted to forego balance and run the ball. ... Read more »

Alabama statues to feature Hank Aaron, other Hall of Famers

MOBILE, Ala. — Statues of Hank Aaron and other local heroes who made the baseball and football halls of fame are planned for a public space celebrating the heritage of ... Read more »

Democratic Exodus From Congress Could Supercharge the Squad

Photo Illustration by Thomas Levinson/The Daily Beast/Getty For more than 20 years, Democratic Rep. Mike Doyle has represented the Pittsburgh area in Congress. So, when he abruptly announced in October ... Read more »

Amazon’s Alexa has a new role: helping seniors and caregivers. On Tuesday, Amazon launched Alexa Together in an effort to help aging consumers and family members or friends who assist ... Read more »

Nobody can stop Kenan Thompson’s shine, not even the pressure of entertaining an audience in one of the largest venues on the West Coast. The 43-year-old comedian is getting ready ... Read more »

NEW ORLEANS — A cruise ship that carried at least 17 passengers and crew members with breakthrough COVID-19 infections when it docked in New Orleans has set sail again with ... Read more »

CHICAGO (AP) — Right after the Summer Olympics, Adam Krikorian was done. Worn down by coaching the U.S. women’s water polo team through a pandemic, he thought it might be ... Read more »

'Sea State': A woman on the brink dives into sex, drugs and oil rig workers

Tabitha Lasley’s debut memoir “Sea State” (Ecco, 240 pp., ★★ out of four) sells itself as a “study of love, masculinity, and the cost of a profession that few outside ... Read more »

Business mogul Elon Musk is more concerned with under-population than over-population. The Tesla CEO said Monday that there are “not enough people” in the world and it could threaten human ... Read more »

S10 represents the Netherlands at the Eurovision Song Contest

Daneri resigning as DA on Dec. 31 with two years left in term; top aide to take over

South Dakota couple charged with drug possession, storing meth paraphernalia in the presence of a child

Nearly all children have fallen behind because of Covid, says Ofsted

Suspect in fatal shooting of Jacqueline Avant charged with murder