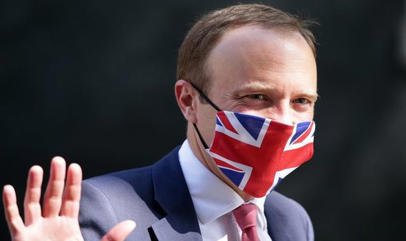 It was discovered that the organisation’s rules ban sitting MPs from holding the post. TheWest Suffolk MP had accepted an invitation to become the UN Economic Commission for Africa’s special representative on financial innovation and climate change. The appointment was seen as a comeback for Hancock, who resigned in June after images were published of him breaking social distancing rules by kissing aide Gina Coladangelo.

However, the 43-year-old has since learned that sitting MPs are barred from holding the UN position. According to sources, he has received an apology for the confusion.

Mr Hancock said: “I was honoured to be approached by the UN and appointed as Special Representative to the Economic Commission for Africa, to help strengthen markets and bring investment to Africa.

“The UN have written to me to explain that a technical rule has subsequently come to light which states that sitting Members of Parliament cannot also be Special Representatives. Since I am committed to continuing to serve as MP for West Suffolk, this means I cannot take up the position. I look forward to supporting the UN ECA in their mission in whatever way I can in my parliamentary role.”

Vera Songwe, the executive secretary of the ECA, had saluted Mr Hancock’s “global leadership, advocacy reach and in-depth understanding of government processes” and praised his “success on the United Kingdom’s response to the Covid-19 pandemic and the acceleration of vaccines”.

However, the appointment had been condemned by figures including Dr Ayoade Alakija, co-chair of the African Union’s Africa vaccine delivery alliance, who described the move as “tone deaf” and the “definition of a colonial hangover”.

Nick Dearden, director of Global Justice Now, said: “If Matt Hancock wants to help African countries, he should lobby the PM to back a patent waiver on Covid-19 vaccines. If he’d done that when in government, tens of millions more people could have been vaccinated.”

© The Manila Times A LITTLE HELP Phoenix center Deandre Ayton (22) provides a pick for guard Devin Booker (1) who dribbles past Alec Burks of New York during the ... Read more »

Uber Eats has sgreed a new partnership with Shell garages (Uber Eats/PA) It’s Black Friday which means one thing and one thing only: deals and discounts on pretty much everything ... Read more »

10 Amazon deals that people went WILD over on Black Friday

Author and motivational speaker David Goggins is famous for his commitment in the gym, and he frequently shares insights into just how intensely he trains on social media. He has ... Read more »

At least 30 people entered a Best Buy store in Burnsville, Minnesota, on Black Friday and stole electronics, according to a Burnsville Police statement obtained by CNN affiliate WCCO. © ... Read more »

The lights were off inside Mohammad Ismail’s third-storey Kabul hotel room, as he stealthily peered through the window at the street below. He caught a glimpse of Taliban officials walking ... Read more »

KATIE Price has blasted I'm a Celebrity… Get Me Out of Here! for banning Richard Madeley from returning to the camp, despite the presenter returning for an interview with hosts ... Read more »

Katie Price shares sweet photo of son Harvey, 19, grinning as he poses in the snow

KATIE Price shared a sweet snap of son Harvey beaming in the snow as her family got into the Christmas spirit. The 43-year-old posted the photo on Instagram, showing Harvey, ... Read more »

Emma Raducanu has been warned she faces a huge challenge to live up to her heroics of 2021. The 19-year-old sensationally captured the US Open without dropping a set in ... Read more »

A young woman who was trying to join her fiance in the UK has become the first victim of the mass drowning in the Channel to be identified. © Krmanj ... Read more »

Ole Gunnar Solskjaer was “buzzing” to hear his name being sung by Manchester United fans following his departure as manager. Solskjaer was sacked by United following a dismal run of ... Read more »

Our betting guru Jones Knows thinks Brighton will beat Leeds. Check out his predictions and betting angles on all 10 games. Brighton vs Leeds, Saturday 5.30, live on Sky Sports ... Read more »

© Provided by Dot Esports If you’ve been playing New World since its release in late September, chances are you’re starting to reach the highest level range of the game. ... Read more »

Dr Alex George reveals he takes medication for his anxiety

© Provided by Daily Mail MailOnline logo Dr Alex George has candidly revealed that he takes medication in order to treat his anxiety in a brave post on Instagram on ... Read more »

© Provided by Hindustan Times A passenger holds his mobile phone while looking at an electronic flight notice board displaying cancelled flights at OR Tambo International Airport in Johannesburg, on ... Read more »

Omicron: Everything we know about the new Covid variant

© Getty Images It is thought that the Omicron variant could have emerged in someone suffering from AIDS – Getty Images What is the new variant? The World Health Organisation ... Read more »

Holly Willoughby wrote to her English teacher who helped with dyslexia

© Provided by Daily Mail MailOnline logo Holly Willoughby has revealed she wrote a letter to her former English teacher, following the success of her book Reflections. The presenter, 40, ... Read more »

CR: EVs Worst For Reliability But Not Due To Their Powertrains

The Associated PressA Bundeswehr aircraft stands with its side flap open at the airport in Memmingen, Germany, Friday, Nov. 26, 2021. The German air force Luftwaffe will begin assisting the ... Read more »

The moderator of a popular Upper East Side mom’s facebook group is demanding pregnancy scans from new members to prove they have children or are expecting. Shutterstock / LightField Studio ... Read more »

A THIRD person has been crushed to death by a tree and 140,000 homes have no power as chaotic 98mph Storm Arwen batters Britain. A 35-year-old driver was killed when ... Read more »

Three people were killed and four were injured — including a 13-year-old — in a shooting in Nashville apartment Friday night. The Metro Nashville Police Department tweeted that the teen’s ... Read more »

The Biden administration on Friday recommended an overhaul of the nation's oil and gas leasing program to focus on areas that are most suitable for energy development and raise costs ... Read more »

Timeline of Omicron's discovery to its arrival in UK

Two cases of the Omicron coronavirus variant have been detected in the UK. Here, the PA news agency looks at how the variant went from an emerging cause for concern ... Read more »

Medical staff move COVID-19 patient who died onto a gurney to hand off to a funeral home van, at the Willis-Knighton Medical Center in Shreveport, La., Wednesday, Aug. 18, 2021. ... Read more »

Russia jails 5 people over coal mine disaster that killed 51

Ambulances and fire trucks are parked near the Listvyazhnaya coal mine out of the Siberian city of Kemerovo, about 3,000 kilometres (1,900 miles) east of Moscow, Russia, Thursday, Nov. 25, ... Read more »

© Provided by Candy Aside from a riveting plot, one of the things that leave fans drawn to a particular TV show or film is the cast members’ offscreen bond. And ... Read more »

Salman Khan fans burst crackers in theatre during Antim screening. Here's what the actor had to say

Salman Khan fans burst crackers in theatre during Antim screening. Here’s what the actor had to say As moviegoers flocked to the nearest cinema halls to catch Salman Khan’s latest, ... Read more »

Here's why Salman Khan is not getting married; Brother in law Ayush Sharma reveals the reason

© Provided by Pinkvilla Salman Khan’s marriage has always been the talk of the town. The ‘Dabangg’ actor to continues to remain one of the most eligible bachelors in India. ... Read more »

Israel on ‘verge of state of emergency' over new coronavirus variant

Flights from South Africa continue, new arrivals not all tested for Covid

S.Africa dismayed at 'punishment' for honesty over Omicron variant

I'm a Celebrity cancelled tonight and tomorrow due to Storm Arwen