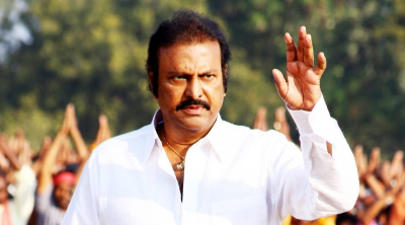 The ‘Mosagallu’ actor sought everyone’s support in this journey after a hotly contested vote that had ended in the opposing panel led by acclaimed character actor Prakash Raj walking out of the association. Vishnu’s team shared pictures showing him signing the papers to complete the formalities.

“I have today assumed the office of the President of MAA!” Manchu Vishnu tweeted. “Need all your wishes and send me positivity as much as you can.”

Prakash Raj and his panel members, who had resigned from their respective positions after the elections, skipped the oath-taking ceremony. Earlier, they expressed their reservations about the legitimacy of the elections and the way they were conducted. Mohan Babu’s alleged “abusive behaviour” was one of the reasons cited by Prakash Raj for his unhappiness.

On Saturday, Mohan Babu was definitely more reconciliatory, urging the members of the Prakash Raj panel not to disassociate themselves from the association, whose sole reason, he said, was to take care of the welfare of all those who are working for the Telugu film industry.

Prakash Raj, though, hasn’t backed down. Alleging foul play in the elections, he has sought CCTV footage from the election officer.

Maxime Meiland supports her mother: ‘That does not mean that we share the same opinion'

“Let me state that it was never my intention to exclude a group or to disparage someone in his or her faith,” Maxime begins her story on Instagram. “The Netherlands ... Read more »

In the blistering cold, huddled in tents, a group of migrants set up camp along an old rail line in Dunkirk in northern France. Among them was Dawan Anwar Mahmud ... Read more »

Australian actor Simon Baker has given an awkward TV interview in which he appeared to distance himself from one of his most successful films. The 52-year-old, who starred in the ... Read more »

Benedict Cumberbatch explores the cause of toxic masculinity as a bullying cowboy in his new Netflix film “The Power of the Dog.” Read more »

© Provided by Business Today Hero Electric is India’s highest-selling EV brand with 36% market share, shows study Despite the economic slowdown in the market due to the COVID-19 pandemic, ... Read more »

This viral video of a tigress and her cubs will make you smile. Watch

A wonderful video of a tigress leading her cubs along a path has gone viral on Twitter. The clip shared by IAS officer Supriya Sahu shows three cubs prancing behind ... Read more »

© Provided by DNA Khanna Gems, the world’s most reputable gemstones company, has undergone a complete transformation in a year. Its official website www.khannagems.com was redesigned to provide more information ... Read more »

© Provided by The Indian Express Instead of reaching out for cold drinks to quench your thirst, why not try natural drinks that are not only delicious but also help ... Read more »

Maxime Meiland: ‘I support my mother, but we don't think the same about everything'

“Let me state that it was never my intention to exclude a group or to disparage someone in his or her faith,” Maxime begins her story on Instagram. “The Netherlands ... Read more »

The portable XGIMI Halo+ projector is all set for launch in the Indian market. According to the company, the projector will be launched with a slew of “never-before” features. The ... Read more »

© Provided by The Times of India KOLKATA: Former Bengal skipper Anustup Majumdar returned to the Bengal squad for the Vijay Hazare Trophy (50-over) meet after being left out of ... Read more »

© Getty Images Oval Invincibles were the inaugural winners of the women’s Hundred © Getty Images The ECB has more than doubled salaries for female players in the second season ... Read more »

Jill Duggar Dillard has a new look. On Tuesday, the 19 Kids and Counting alum, 30, shared that she dyed her hair blonde, unveiling the lighter locks on her Dillard ... Read more »

An electric car is charged at a roadside EV charge point, London, October 19, 2021. REUTERS/Toby Melville Just when it looked like it was smooth sailing for stocks, fears of ... Read more »

After years of silence, the once high-flying biotech CEO Elizabeth Holmes has nearly finished explaining in her own words how her blood-testing company Theranos imploded after raising nearly a billion ... Read more »

Image expert: ‘The Meilandjes are treading on thin ice'

Card company Hallmark, Emma Matras, Milka and Nivea didn’t know this week how quickly they had to cancel their partnership with the Meiland family after Erica Meiland made comments about ... Read more »

© Provided by Bears Wire The Chicago Bears are pretty thin at cornerback right now, and aside from Jaylon Johnson, there’s been nothing to write home about. According to ESPN’s ... Read more »

© Provided by Colts Wire The Indianapolis Colts are hoping to see the return of wide receiver Parris Campbell this season and there is some hope that the speedy wideout ... Read more »

Brian Kelly Explains Why He Left Notre Dame For LSU

© Provided by The Spun Head coach Brian Kelly of the Notre Dame Fighting Irish leaves the field after a game against the Temple Owls. After shocking the college football ... Read more »

Karisma Kapoor looks timeless in a designer Kanjeevaram ethnic look, proves every saree has a story to tell

Karisma Kapoor has been spotlighting her love for traditional wear for years now. The star’s ethnic wardrobe is all about thoughtful pieces that display exquisite craftsmanship. Her envy-worthy collection of ... Read more »

Just ahead of No Entry 2, Fardeen Khan stuns with his 360 degree transformation at Tadap premiere — view pics

© Provided by BollywoodLife.com We reported that Anees Bazmee is all set with No Entry 2 that will be set across two time zones and have a huge ensemble cast. ... Read more »

© Provided by UGA (Georgia) Wire Georgia football is on fire in recruiting and on the football field. Head coach Kirby Smart and the University of Georgia have the No. ... Read more »

Gimme Him: One player Giants would steal from Dolphins

© Provided by Giants Wire The New York Giants (4-7) will visit the Miami Dolphins (5-7) at Hard Rock Stadium in Miami Gardens, Florida this Sunday afternoon. That, of course, ... Read more »

© Provided by Pinkvilla   Olivia Rodrigo, H.E.R., and The Weeknd all took home awards at the redesigned Apple Music Awards, which have expanded to include worldwide music trends. Rodrigo ... Read more »

© Michael Chow/The Republic / USA TODAY NETWORK Arizona Cardinals running back James Conner James Conner seems to have found a home with the Cardinals. As he plays out his ... Read more »

© Provided by Patriots Wire Arguably the two best teams in the AFC will square off on Monday night in Week 13. The New England Patriots will hit the road ... Read more »

'Annie Live!': NBC bets its bottom dollar on another old-school musical for a 'new generation'

BETHPAGE, N.Y. — The sun will come out tomorrow. But Sandy will have to wait. It’s late afternoon on a labyrinthine Long Island soundstage, where the cast of NBC’s “Annie ... Read more »

© Provided by Trojans Wire Amid all the other news stories popping in the wake of Lincoln Riley’s arrival at USC, prime prospect Domani Jackson has narrowed his list down ... Read more »

Tua Tagovailoa hit his 16th game started last week when he and the Dolphins beat the Carolina Panthers 33-10 to win their fourth game in a row. With 16 starts ... Read more »

Chicago vs. Arizona: Which Cardinals player would you want on the Bears?

© Provided by Bears Wire The Chicago Bears (4-7) will host the Arizona Cardinals (9-2) on Sunday, where Chicago will be looking to upset Arizona to keep in the thick ... Read more »

Do away with big IPL auction say Capitals and KKR heads

'We're not Mohun Bagan, we have to fight polls': Derek O'Brien after Mamata's attack on UPA

'Trying to give 75% reservation to all locals in Haryana': Dushyant Chautala

83: Adinath Kothare aka Dilip Vengsarkar on Ranveer Singh's portrayal of Kapil Dev: He is always in his zone