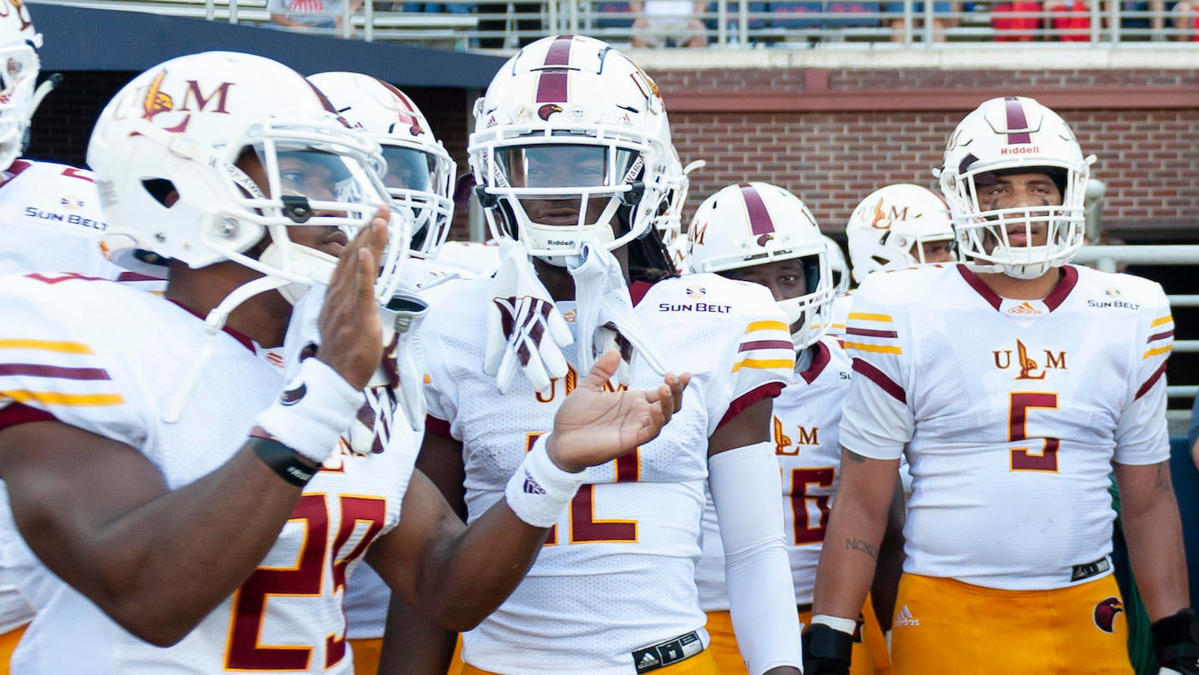 Oct 6, 2018; Oxford, MS, USA; Louisiana Monroe Warhawks head coach Matt Viator at right waits to lead his team onto the field to face the Mississippi Rebels before the first half at Vaught-Hemingway Stadium.

The Liberty Flames will take on the Louisiana-Monroe Warhawks at 7 p.m. ET on Saturday at JPS Field at James L. Malone Stadium. The Flames have a defense that allows only 14.33 points per game, so Louisiana-Monroe’s offense will have their work cut out for them.

You’re bound to get a positive result if you outscore your opponent every quarter, and that’s exactly how it played out for Liberty last week. They were the clear victors by a 41-13 margin over the Middle Tenn. Blue Raiders. The game was all but wrapped up at the end of the third, by which point Liberty had established a 34-13 advantage. WR Demario Douglas and QB Malik Willis were among the main playmakers for Liberty as the former caught six passes for one TD and 156 yards and the latter passed for two TDs and 222 yards on 30 attempts in addition to rushing for one TD and 80 yards.

Meanwhile, Louisiana-Monroe was expected to have a tough go of it last week, and that’s exactly how things played out. They have to be aching after a bruising 55-21 defeat to the Georgia State Panthers. The Warhawks were in a tough position by the half, with the score already sitting at 28-7. The losing side was boosted by QB Chandler Rogers, who passed for two TDs and 208 yards on 23 attempts in addition to picking up 72 yards on the ground. Rogers had some trouble finding his footing against the Coastal Carolina Chanticleers two weeks ago, so this was a step in the right direction.

The Flames are the favorite in this one, with an expected 32.5-point (!) margin of victory. They have been consistent moneymakers against the spread when favored (3-1), so they might be worth a quick bet.

Liberty’s win lifted them to 5-1 while Louisiana-Monroe’s loss dropped them down to 2-3. Allowing an average of 36.40 points per game, the Warhawks haven’t exactly asserted themselves on the defensive end. We’ll see if they can patch up the holes in their defense before their upcoming contest.

The Flames are a big 32.5-point favorite against the Warhawks, according to the latest college football odds.

Liberty won the only game these two teams have played in the last seven years.

Much at stake for India as WTO talks lose steam

Zach Wilson, Robert Saleh fighting for each other is sign this Jets era has chance

Zach Wilson and Robert Saleh had each other Sunday, and that was pretty much it. The Jets did not have a Jason Garrett to blame in Year 1 of their ... Read more »

44 can't-miss Nintendo, PlayStation, and Xbox deals to buy on Cyber Monday — up to 76 percent off

A University of Nevada, Las Vegas, student died of brain injuries after he took part in a boxing match held by a fraternity to raise money for charity. The student, ... Read more »

Nov. 28—The Berks County sheriff's office is seeking the following fugitives: Isidro Santos-Hilario, 23, who recently lived in the 100 block of South Third Street on a charge of possession ... Read more »

© Provided by Zee News LONDON/AMSTERDAM: The Omicron coronavirus variant spread around the world on Sunday, with new cases found in the Netherlands, Denmark and Australia even as more countries ... Read more »

© Provided by Times Live A KwaZulu-Natal robbery suspect will appear in court on Monday after reporting his vehicle — which he is alleged to have used in a business ... Read more »

Former Secretary of Defense Mark Esper is suing the Department of Defense for not clearing his book manuscript for publication, after the agency told Esper he needed to take out ... Read more »

Mumbai: India’s stock benchmarks – the Sensex and the Nifty – could decline by another 5-10 per cent as uncertainty over the new virus variant grips the world, according to ... Read more »

Hindujas ready $1.1 bn to up stake in IndusInd Bank

ET Intelligence Group: India’s ‘unlock’ trade is in palpable danger of downing the shutters again as the world turns increasingly circumspect – and jittery – about a new African viral ... Read more »

Images show how girl, two, helped her twin to take her first steps

© Provided by Daily Mail MailOnline logo Toddling through the autumn leaves, these are some of the first steps taken by a little girl with Down’s syndrome – thanks to a ... Read more »

I've spent £600 and MONTHS decorating my Harry Potter-themed Christmas tree – I do it every year, it's an investment

A MUM spent several months and £600 decorating a Harry Potter-themed Christmas tree – she said it’s an investment and she wants to make it even bigger next year.  Mum-of-four ... Read more »

A POLICE force has been accused of being woke by using gender-neutral warrant cards. Male officers in Sussex were previously given A or C at the start of their IDs ... Read more »

ICELAND supermarket WON'T be forcing their shoppers to wear masks, despite the new Covid rules being introduced this week. The supermarket chain's boss said that he won't be asking staff ... Read more »

Perhaps we could’ve prevented this tragedy if our justice system placed more value on listening to and protecting women. Read more »

© Provided by The Financial Express The report makes the important point that the digital lending sector has evolved to a point where there is now a regulatory gap that ... Read more »

The Fed is way behind the curve

© Provided by The Financial Express The fourth (or fifth) wave of the pandemic, which has surprised people in Europe and the US, could again create inflationary pressures, since the ... Read more »

Banks in India may have to fight harder for deposits

© Alpha stock images via Picpedia Banks in India may have to fight harder for deposits On November 12, the Reserve Bank of India (RBI) opened up a portal through ... Read more »

© Provided by The Times of India CHENNAI: Fintech startup Slice, which targets millennials with credit cards, has become India’s 41st unicorn in 2021. Slice has raised $220 million in ... Read more »

SANTA CLARA, Calif. (AP) — Deebo Samuel ran for two touchdowns before leaving with an injury and Elijah Mitchell ran for 133 yards and a score, leading the San Francisco ... Read more »

Nov. 28—Police are investigating after large groups of people robbed Best Buy stores in Burnsville and Maplewood on Friday. A group of 20 to 30 people entered a Best Buy ... Read more »

The underwater 'kites' that generate electricity

© Minesto The energy-generating kites “fly” under the water, tethered to the seabed A pair of sleek, winged machines are “flying” – or at least swimming – beneath the dark ... Read more »

© Provided by The Indian Express Haryana Governor Bandaru Dattatreya called upon the alumni to come forward to contribute in making the universities of the state self-reliant, on Sunday. He ... Read more »

Ben Fogle: People using their front gardens to park EVs should get out and plant trees

Electric vehicle drivers tempted to “rip up” their front gardens to make room for a charging bay should personally plant trees in their local park or green space to make ... Read more »

Dimitrios Kambouris/Getty Images Spoilers ahead for “House of Gucci.” While the critical reception of director Ridley Scott’s new fact-based crime drama “House of Gucci” is mixed — it earned a ... Read more »

Chaotic moment music fans storm into O2, smash down scanners and push past security guards to get into concert

THIS is the chaotic moment music fans stormed into the O2 Arena, smashing down security scanners and pushing past guards. A stampede of revellers pushed their way through the security ... Read more »

Nov. 28—A 36-year-old man was arrested in connection with a stabbing in Bow Sunday morning, police said. Just before 11:45 am., officers were called to a Bow Bog Road home ... Read more »

Opinion: Lincoln Riley to USC was a no-brainer. He avoids SEC mayhem, has shot at a championship.