A little like the win, the hug for the man who secured it took a while to come.

Jurgen Klopp had set off to catch Divock Origi the moment the whistle went but at each stride he was blocked. A red shirt here, an orange one to console there, and then three officials in a line, a handshake and a nod for all.

When he finally caught Origi, he grabbed him from behind and nearly dragged the poor chap off his feet. 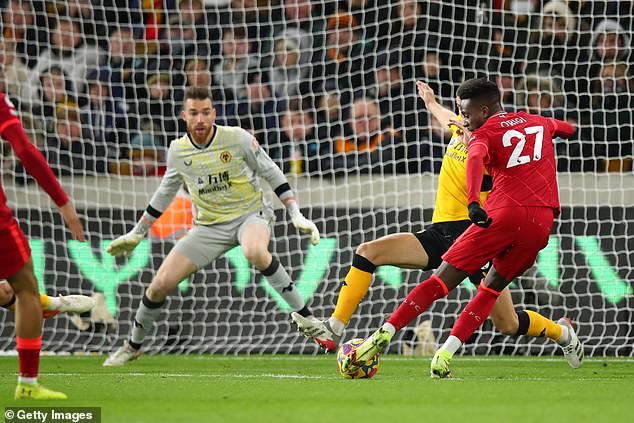 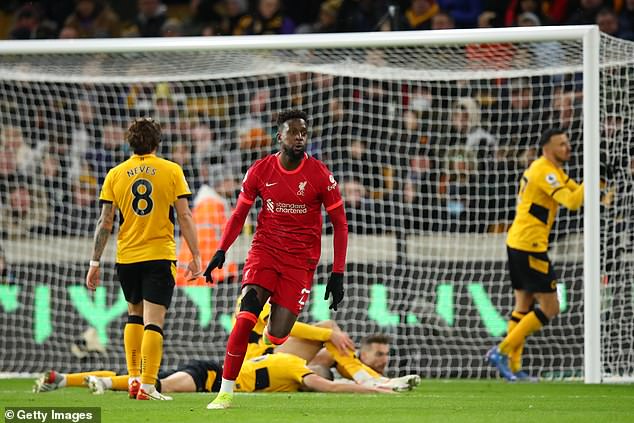 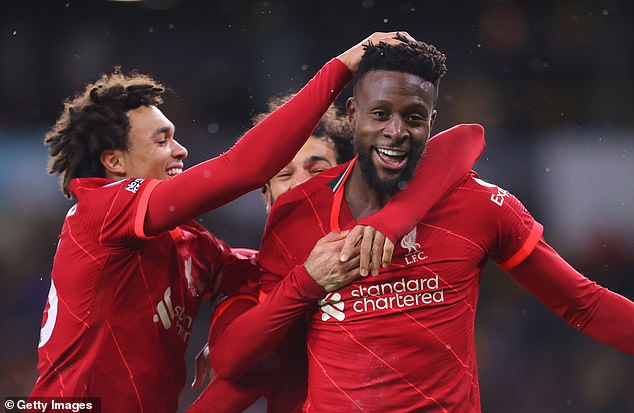 At 26, you might wonder why he remains content with so much time in the shadows, 34 starts across seven seasons, but when they let him out he has made an exceptional habit of catching your eye.

He did it against Barcelona and Tottenham when they won that big cup a couple of years back; he did it here against Wolves and it won’t echo for nearly so long.

But it could yet go down as a moment of profound importance in this title race, for how do you quantify the value of 94th-minute winners? What price on a goal that shifts a mood so considerably, given this risked being an almighty letdown on a day when Chelsea left the door open at the top?

There were 16 shots from Liverpool before Origi’s, and most were off course, weak or, in the case of Diogo Jota, just a little laughable.

Not much good was coming from an attack that is usually as devastating as it is beautiful. It wasn’t terrible, it just wasn’t that great.

And that can be the kind of regret that lingers when the prizes go out and you recall the cold day you drew 0-0 at Wolves.

Good side, Wolves. They don’t concede many. But they have scored 12 goals all season. Mo Salah has 13.

A team like Liverpool, on a charge of 18 straight games in which they scored at least twice, shouldn’t drop points in that kind of equation.

So that is why Klopp nearly floored Origi with his hug and later dropped a quite marvellous line: ‘I hope he one day finds a manager who plays him more than me.’ 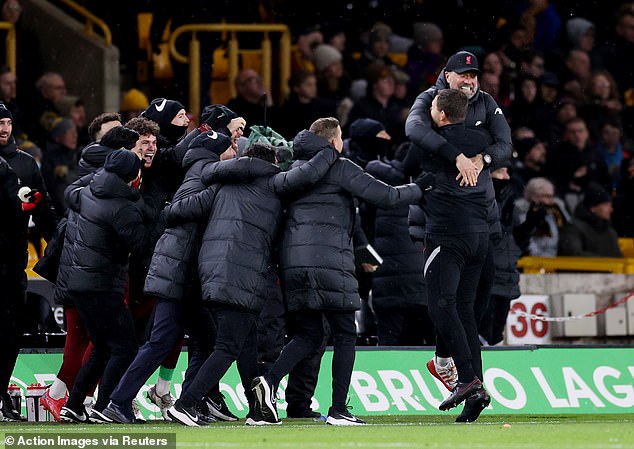 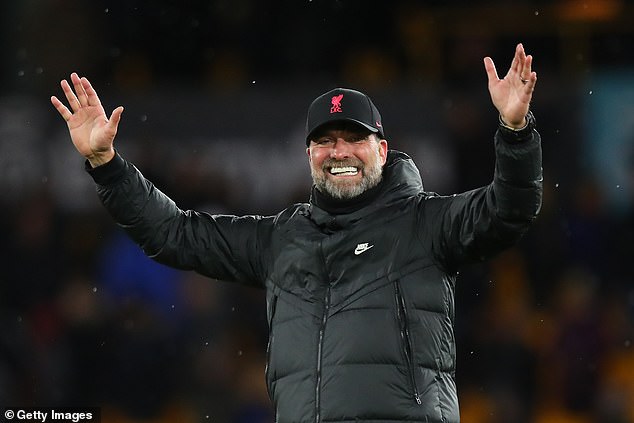 It was delightfully catchy, even if the romance of the identity of the match-winner might obscure a more relevant trait; Klopp’s Liverpool can make it all look very easy but they have that essential quality of being able to grind out the result when it isn’t.

Since Klopp arrived, Liverpool have scored a league-high 13 game-winning goals in the 90th minute or later.

‘It was matchday 14 or 15 today, not even half the season,’ Klopp said. ‘You have glamorous wins 20, 25 times a year? This is really unlikely. You have to win football games, however. We really pushed Wolves back, our pressing was outstanding.

‘We are not surprised the boys stay on track, but I don’t take it for granted. It is an important skill to stay positive in a game.’ And it enabled an important win.

'Until a system is put in place, I don't care who we sign': Rio Ferdinand urges Manchester United to establish a 'clear identity' rather than chase huge transfers to paper over the cracks

Data from the Sanger Institute shows 300 BA.2 cases detected last weekFor comparison,  there were 179 Delta infections spotted in the same periodThe rise appears to coincide with an uptick in Covid infections across the UK  Read more »

© Provided by The South African Recently, Sundowns were said to have been joined by Belgian giants Anderlecht in their pursuit of SuperSport United‘s Teboho Mokoena. READ | FORMER BAFANA BAFANA STAR KEKANA: WHY ... Read more »

ANTONIO RUDIGER sparked a frenzy of excitement amongst fans in Sierra Leone ahead of the launch of his charity organisation. The Germany centre-back flew to the country of his parents’ ... Read more »

Video: Cardi B awarded $1.25 million in federal libel lawsuit against Latasha K... after the rapper testified she was suicidal over blogger's false claims that she worked as a prostitute

Suspect, 33, appears in court ahead of murder trial accused of killing Freda Walker, 86, and the attempted murder of her 88-year-old husband at their Derbyshire home

Vasile Culea arrested after Freda Walker was killed at home in Shirebrook, DerbsThe 86-year-old was found by concerned neighbour after incident on January 14 Her husband Ken Walker, 88, also suffered critical injuries during the incidentToday, 33-year-old suspect Culea appeared at Derby Crown Court for a hearing He is charged with murder of Ms Walker and attempted murder of Mr Walker Read more »

Primary school teacher, 37, who was filmed kicking and slapping her horse during a hunt WILL be prosecuted by the RSPCA over alleged animal cruelty

Sarah Moulds, 37, has lost her role as a primary school teacher over the clip At a hunt, the mother was filmed lashing out and slapping and kicking a horse The footage caused outrage and she is now being prosecuted by the RSPCA She has been charged with causing unnecessary suffering to a grey pony and failing to take reasonable steps to protect the pony from pain, suffering or injury  Read more »

Video: Bus crash horror in east London: Three children and two adults are taken to hospital after double-decker with 'scared and crying' school pupils on board smashes into white goods store

Melbourne, Adelaide and Perth will see temperatures reach 30s on WednesdayBrisbane and northern parts of Australia are expected to be drenched with rain  Melbourne will see the hottest day with 35C forecast while Hobart will hit 21C Protests against Australia Day are set to kick off in capital cities around Australia  Read more »

Man, 26, is charged with causing grievous bodily harm with intent after motorbike is filmed speeding the WRONG way through heavy M25 traffic before hitting and seriously injuring a police officer

Motorcyclist rode wrong way along M25 in Kent twice before collision, police sayKent police officer was airlifted to London hospital and is in a stable conditionHe was standing outside his vehicle when motorcyclist collided with him Patrols were responding to reports of a stolen bike when the incident happened Charlie Bishop, from Dartford is to appear before Medway Magistrates' CourtHe faces charges including GBH with intent and aggravated vehicle taking  Read more »

Limit how much an MP can earn from a second job, urges sleaze watchdog

A sleaze watchdog has suggested there should be a limit on how much an MP can earn from a second job and on how many hours they can work outside ... Read more »

JAKE PAUL has purchased shares in the UFC's parent company in a bid to help increase fighter pay in the promotion. The YouTuber turned boxer has been leading the charge ... Read more »

'You know as much as me': Hollyoaks star Sarah Jayne Dunn responds to probes about her character's exit - and heaps praise onto husband Jon for supporting her OnlyFans

EXCLUSIVE: A-Rod settles $50M lawsuit filed by his ex brother-in-law over property empire the day before he was set to go to trial after tenuous SEVEN-year battle

Davina McCalls says it is 'weird to haul someone over hot coals' over a tweet they wrote ten years ago and blames a lack of forgiveness from society... as she weighs in on cancel culture

‘Hamilton knows his shelf-life in F1 is shorter than Russell's'

Team ROC to do everything in Beijing to prove high class of Russian sport, Putin believes