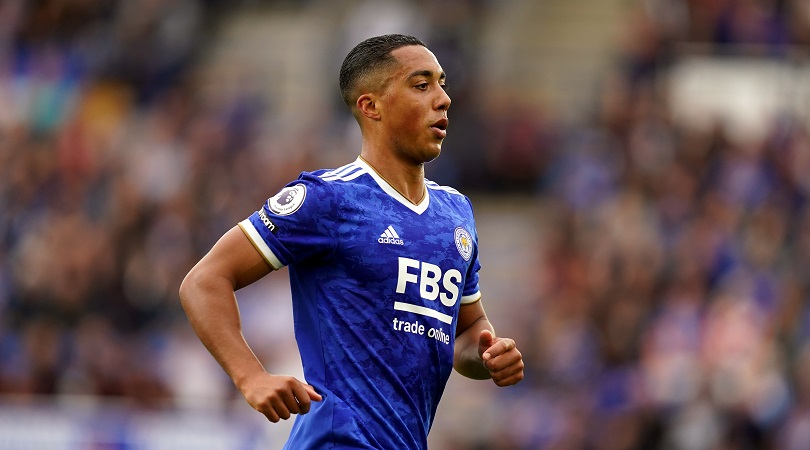 The Belgium international is tied down to the King Power Stadium until 2023.

Stories emerged this week stating that the midfielder had turned down the offer of a new deal.

That opened the door to Tielemans sealing a transfer next summer, with Leicester unlikely to risk losing him for nothing at the end of next season.

Manchester United, Liverpool and Chelsea have all been credited with an interest in the 24-year-old.

Juventus, Bayern Munich, Real Madrid and Atletico Madrid are also said to be admirers of the former Monaco man.

However, Rodgers has now clarified Tielemans’ status by rejecting the claims that he has turned down a new contract.

“There’s reports, but there’s (been) no turning down,” the Leicester boss said ahead of his side’s meeting with Brentford on Sunday.

“I think there’s just dialogue between the club and Youri’s people. I think the club are waiting to hear back.

“But that’s something that’s out of my control. What I can control is his mentality, his commitment to the team, and you cannot question that.

“My role is to improve him as a player, to ensure he’s focused and his commitment is on his performance and the team. I don’t think you can argue against that. He’s not lost any focus whatsoever. He’s a really gifted young player. I love working with him.

“I understand the nature of the game. If his commitment and focus changes, then it becomes an issue. But I don’t see that with Youri at all. He’s just so professional. He’s a really respectful young guy.

“His representatives have a job in terms of trying to do the best they can for him. I try to concentrate on the football side and give him my best.”

Leicester fans will be pleased to hear Tielemans has not rejected a new deal, but concern about his future will continue until he puts pen to paper.

The Belgian may well decide to keep his options open for now, and his decision could depend on where Rodgers’ side finish this term.

Tielemans will want to be playing Champions League football on a regular basis, and Leicester might not be able to offer him that.

IN THE MAG Messi, Neymar, Mbappe – destined for glory or doomed to fail? PLUS Ronaldo exclusive, George Graham, Oldham and more

Alan Shearer praises Michael Carrick as he exits Manchester United...while Thierry Henry and Patrice Evra believe the temporary boss has left the club before he was forced out the door

EXCLUSIVE: Azeem Rafiq had gambling debts that ran into THOUSANDS paid off by the Professional Cricketers' Association - and they also provided counselling for the ex-Yorkshire star who criticised the body in legal battle over racist abuse

Nurse gets 10 years for sex assault of incapacitated woman

NASSER HUSSAIN: England's superman Ben Stokes is our talisman who will stand toe to toe with the Aussies at the Ashes... he has to play in the First Test at the Gabba

Tottenham vs Brentford LIVE: Antonio Conte's side look to bounce back from European embarrassment with a tricky test against promoted Bees

Antonio Conte's Tottenham are hoping to climb to sixth in the Premier LeagueTheir last game was a 2-1 Europa Conference League humbling against NS MuraThomas Frank's promoted side can go level on points with Spurs if they win Follow this link for latest Premier League news, including live action and resultsPremier League table - as it stands  Read more »

HE'S had his walk around Old Trafford but Ralf Rangnick will NOT be in charge of Manchester United tonight against Arsenal. Michael Carrick is the man at the helm, with ... Read more »

Wall Street balks as Fed signals party's ending, but is it?

NEW YORK — The Federal Reserve’s job, its longest-serving chairman once said, is to “take away the punch bowl just as the party gets going,” and that’s exactly the message ... Read more »

On The Vine: Spark change, blaze a path

We back! Hope you turned off the news, silenced the phones and manged to have a restful holiday. Ready to dive back in? Around the block Eric DeValkenaere, center, is ... Read more »

A nurse prepares a dose of the of coronavirus disease (COVID-19) in Dutywa JOHANNESBURG (Reuters) – The new Omicron variant of the coronavirus poses a threefold higher risk of reinfection ... Read more »

Haley to receive GOP group's highest award at The Citadel

Virtus - Fortitudo a Basketcity: i biglietti per il derby 111

Former Arkansas defensive coordinator and interim coach Joe Kines is famously quoted as saying “in the (Southeastern Conference) they slit your throat and drink your blood.” This quote originated with ... Read more »

Detectives with the Murfreesboro Police Department's Criminal Investigations Division on Wednesday arrested a man on charges of shooting his former girlfriend to death. Myron Jenkins, 26, is charged with first-degree ... Read more »

The FBI is asking for help in its search for a wanted man who could be in the Columbia area. A federal warrant has been issued for Levester Tyyon Woods. ... Read more »

A student accused of hopping behind the wheel of a school bus and taking it on a joyride has been arrested, according to Oklahoma authorities. Stillwater police got a call ... Read more »

ORLANDO, Fla. (AP) — University of Florida administrators told faculty members they couldn’t used the words “critical” and “race” together in describing a new study, out of fear that it ... Read more »

As omicron looms, US is still battling the delta wave

Lou Holtz isn’t a fan of how Brian Kelly left Notre Dame or the reasons behind the head coach’s sudden departure to LSU. All signs on Wednesday point to Notre ... Read more »

ARSENAL star Gabriel fought off a baseball bat-wielding robber who attempted to steal his car from his garage. A pair of thieves followed the £27m centre-back and his friend home ... Read more »

Steve Holland insists England “have a reason to believe” they can win the World Cup in Qatar next year. Assistant coach Holland hailed the Three Lions’ consistency in a hectic ... Read more »

A special grand jury in Virginia Beach has found “no probable cause” to charge a local police officer with the killing of singer Pharrell Williams’ 25-year-old cousin. Despite not having ... Read more »

U.S. Department of Justice will not pursue civil rights charges in death of Everett Palmer Jr.

The U.S. Department of Justice has determined that there is insufficient evidence to pursue civil rights charges in the case of Everett Palmer Jr., a U.S. Army veteran whose death ... Read more »

Dec. 2—Two detectives assigned to investigate 10 alleged MS-13 killings across the Santa Maria Valley from 2013 to 2016 testified in court Wednesday about their wiretap operations, which ultimately set ... Read more »

Celtic 1-0 Hearts: Kyogo Furuhashi nets 14th goal of the season as hosts narrow the gap on leaders Rangers to four points but victory is marred by injuries to Jota and Stephen Welsh

IAN LADYMAN: Ralf Rangnick is ready to begin his task of transforming Man United after watching their thrilling victory over Arsenal but it is not easy to turn a club around... just ask Gunners boss Mikel Arteta

'His best game yet': Glenn Hoddle praises Tottenham midfielder Oliver Skipp after fine showing as Spurs beat Brentford - but boss Antonio Conte wants him to improve with the ball

MARTIN SAMUEL: It is not the fault of Everton fans that so much money has been wasted but the Merseyside derby scenes were unhelpful... the poisonous mood could drag skittish Toffees all the way down

Arsenal are plotting a move for Everton forward Dominic Calvert-Lewin with Mikel Arteta planning for life without Alexandre Lacazette... but the Gunners would have to fork out £60MILLION to land the England star

Bernie Ecclestone on why the public want to see Max Verstappen crowned champion over Lewis Hamilton, what worries him most about Formula One... and who he thinks is the greatest driver of all time

Ex-Barcelona target Jean Michael Seri on a hot streak at Fulham after suffering from ingrowing toenails in cold weather!

From Mo Salah to Ronaldo and David Beckham – can you guess which footballer owns these impressive calves?

Patrice Evra admits he is 'PERPLEXED' by the reaction to the appointment of Ralf Rangnick... while Alan Shearer claims the German boss faces a 'messy' situation to lift his 'disjointed' squad at Old Trafford

Sports betting ads: Industry weighs how much is too much?