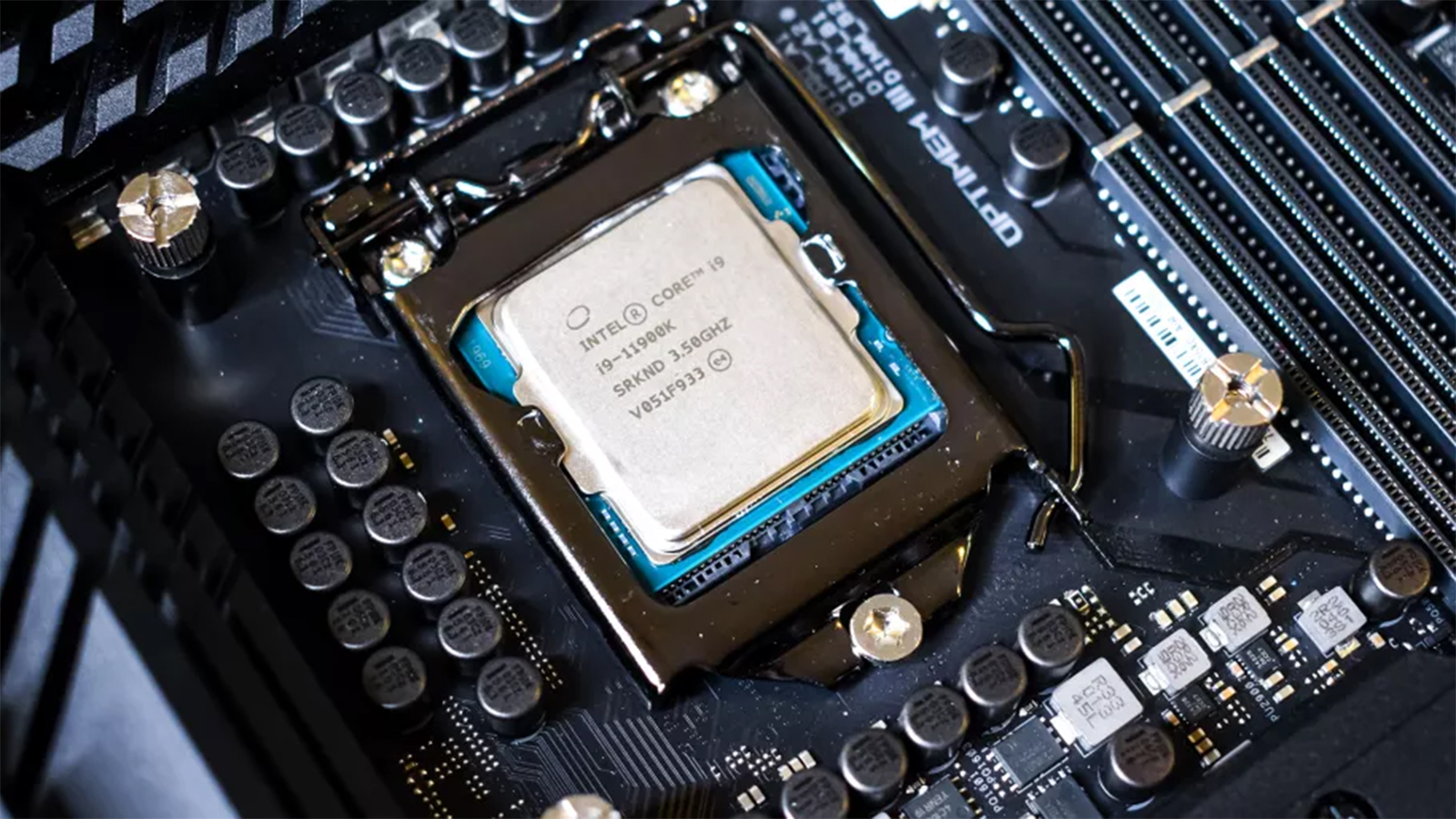 If a newly leaked benchmark is any indication, the Intel Core i9-12900K is going to be a veritable powerhouse of a processor, beating out even a 32-core AMD Ryzen Threadripper 2990X.

The new leak comes courtesy of Twitter leaker REHWK, and shows the results of a CineBenchR23 benchmark running Intel’s flagship Alder Lake CPU, the 8+8-core Core i9-12900K. If valid – leaked benchmarks always need to be taken with a huge helping of salt – this would be the first mainstream consumer processor to breakthrough the 30,000 point barrier on CineBenchR23 with a multi-core score of 30,549.

While the AMD Ryzen 9 Threadripper 2990WX also clears the 30,000 mark (30,054), AMD’s Threadripper processors are designed for high-end workstation PCs like those used in creative content production like animation, music, video, and game development. It is definitely on the Pro end of the CPU spectrum, especially considering its $1,800 price tag when it launched in 2018.

An Intel Core i9 on the other hand, as Wccftech notes, is on the high end of the consumer desktop market and comparable to an AMD Ryzen 9 5900X. They put the Intel Core i9-1200K’s performance about 7% better than the Ryzen 9 5950X, which they note scores about 28,500 points in CineBenchR23 (we haven’t been able to independently verify this score ourselves).

Featuring only eight Golden Cove performance cores with 16 threads, and eight single-threaded Gracemont efficiency cores, beating out a 32-core, 64-thread monster like the 2990WX would be quite a feat.

Make no mistake, the Intel Core i9-12900K is going to be a premium chip targeting the PC enthusiast more than your average consumer. Intel’s current flagship CPU, the Core i9-11900K has an MSRP of $539 (about £390, AU$710), so it isn’t cheap by any means, but it is definitely within the budget of a serious PC builder.

And if this benchmark is any indication of the quality of the CPU architecture being cooked up for Intel Alder Lake chips, then Intel could definitely be pulling off a coup at exactly the right time.

Analysis: Intel Alder Lake could be exactly what Intel needs to get back on track

There’s no question that Intel has had a rough go of it in recent years. After years of CPU market dominance with its Core processor line, Intel started seeing its advantage slip several years ago with the introduction of AMD’s Ryzen series processors.

Earlier this year, AMD clawed its way back to parity with Intel in the desktop processor market, at least by some market metrics. Its Zen 3 processors have been more popular with PC enthusiasts than Intel’s Rocket Lake-S, and AMD seemed to be well-positioned to maintain the ground it’s taken back from Team Blue in the past six to seven years,

That’s what makes Alder Lake feel like such a make-or-break moment for Intel right now. Intel is expected to launch its Alder Lake-S desktop processors as early as November, and AMD isn’t expected to have its answer to Alder Lake – its Zen 4 processors – for an entire year or even longer.

Zen 4 might turn out to be even better than Alder Lake in terms of performance, but Alder Lake will also be the first to support PCIe 5.0 and DDR5 RAM, while AMD Zen 4 is only known to support DDR5. It’s PCIe 5.0 support remains an open question.

Worst still for AMD, the late release of its Zen 4 processors mean it might not actually be competing with Intel Alder Lake at all, it’s real competition might be Intel’s 13th-generation Raptor Lake processors, which could launch less than a year after Zen 4.

We’ll have to see what AMD has in store for its 3D V-Cache technology, which it is expected to introduce for its Zen 3 chips sometime before the release of its Zen 4 processors. Whether it will be enough to keep up with Intel (assuming this benchmark and another recently leaked Ashes of the Singularity benchmark hold up), will be an interesting question as we head into 2022.

Algorithms can't replace Lewis Hamilton, even if they're faster drivers

City-level climate talks are often dominated by those who carry social privilege. UNFCCC/Flickr Governments across the world are facing increasing pressure to keep rising global temperatures below 1.5C above pre-industrial ... Read more »

Facebook Connect, previously known as Oculus Connect, is happening very soon. The event is dedicated to updates and information on the company’s virtual reality and augmented reality technologies, including those ... Read more »

T-Mobile USA has delayed the planned switch off of Sprint’s 3G network by three months to give its partners extra time to help affected customers make the transition away from ... Read more »

Google has paid Russia more than 32 million roubles ($455,079) in fines for failing to delete content Moscow deems illegal, the company and a Russian lawmaker said after talks on ... Read more »

Online content and gaming platform FaZe Clan Inc said on Monday it would go public through a merger with a blank-check firm in a deal that values the combined company ... Read more »

The Russian-based agency behind last year’s massive SolarWinds cyberattack has targeted hundreds more companies and organizations in its latest wave of attacks on U.S.-based computer systems, Microsoft said in a ... Read more »

Feast your eyes on this ‘prototype' of the original iPod

Over the weekend, the Apple iPod turned 20. To honor this, we created a deluge of content, including vox pops, how it got us through war, and comparing it to ... Read more »

Dune's most frustrating plot device is also its smartest

Warning: Spoilers follow for Dune As you’ll likely have heard by now, Denis Villeneuve’s Dune comes to a rather abrupt end. It was always known that the director would shoot ... Read more »

As competition ramps up, India’s true wireless earbuds segment is getting competitive, especially in the affordable space. The Redmi Earbuds 3 Pro are the latest TWS earbuds from Xiaomi to ... Read more »

Developer shows how to install Google Play Store on Windows 11

Microsoft, last week, officially announced the availability of Android apps to Windows 11 users who are part of the Windows Insider’s Beta channel. The company has partnered with Amazon and ... Read more »

Amanda Holden always brightens up our Monday mornings with her fun Instagram posts, and it's safe to say that we are loving her latest look. RELATED: Amanda Holden stuns during ... Read more »

Kym Marsh and Scott Ratcliff promised to spend the rest of their lives together (Kym Marsh/Instagram) Kym Marsh walked down the aisle to marry her Army Major love Scott Ratcliff ... Read more »

The decision by Taiwan Semiconductor Manufacturing Co (TSMC) to comply with a US request for information has stirred anger and uneasiness in China over fears that Washington could use the ... Read more »

Despite their seemingly simple core functionality, calendar apps are an established sector of the app market, each offering a variety of features to set it apart from the competition. Those ... Read more »

It seems that there’s a new Samsung Galaxy S22 rumor dropping every day at the moment – and today we’ve got unconfirmed snippets of information to share about the charging ... Read more »

If you're quick, you can change your embarrassing Battle.net username for free

Activision Blizzard is allowing you to change your Battle.net username for free up until November 5, 2021. Blizzard’s announcement comes after changing the name of its fan-favorite Overwatch character ‘Logan ... Read more »

Apple MacBook pro review: A radical update that's miles ahead of the competition

We tested it with programs, videos and more, considering the recharge speed as well as trying out the camera (The Independent) Apple has released new MacBook pro laptops, with a ... Read more »

Discord and Skype could make games run worse on PC, suggests an eyebrow-raising claim from Ubisoft

Ubisoft says that a number of popular PC applications, including Discord and Skype, may “interfere” with the smooth running of its games. © Provided by GamesRadar Discord The developer recently ... Read more »

The nation's mobile phones are ‘cluttered' with over a BILLION uncontacted phone numbers, unused apps and unopened messages

A study of 2,000 smartphone users found they’ll have an average of 13 phone numbers that haven’t been contacted in over a year, nine apps that never get used and ... Read more »

The DJI Mavic 3 drone appears to be very close to take-off, with some new leaked photos revealing the Mavic 2 Pro successor’s full design and dual cameras. The first ... Read more »

Windows Terminal update will have power users licking their lips

Microsoft has rolled out new stable and preview builds for Windows Terminal that contain plenty of new functionality for developers and power users to get excited about. The headline upgrade ... Read more »

Nintendo Switch OLED Vivid or Standard mode: which setting should you choose?

The Nintendo Switch OLED lets you choose between two color settings – Vivid or Standard – and there’s a drastic difference between the two modes. It’s worth flicking between the ... Read more »

Marvel's Guardians of the Galaxy review

Pretty and powerful, are Apple's new MacBook Pro laptop computers made for you?

Two years ago, Apple threatened to pull Facebook and Instagram from its app store over concerns about the platform being used as a tool to trade and sell maids in ... Read more »

Huawei has launched its latest range of truly wireless earbuds — FreeBuds 4i — in India at Rs 7,990. The company has additionally announced Diwali offers on its latest range ... Read more »

Seventeen sustainable projects, including a timber cultural centre in Sweden, a school built from bamboo and 3D-printed clay homes, will be exhibited in the Build Better Now virtual pavilion during ... Read more »

The third episode of ITV’s new comedy-drama The Larkins aired on Sunday night. And while most viewers are enjoying the show, some are taking issue with its historical inaccuracies. MORE: ... Read more »

Google Play Store is being flooded with SMS scam apps

Facebook papers: Frances Haugen: 'We have to take advantage of this moment'