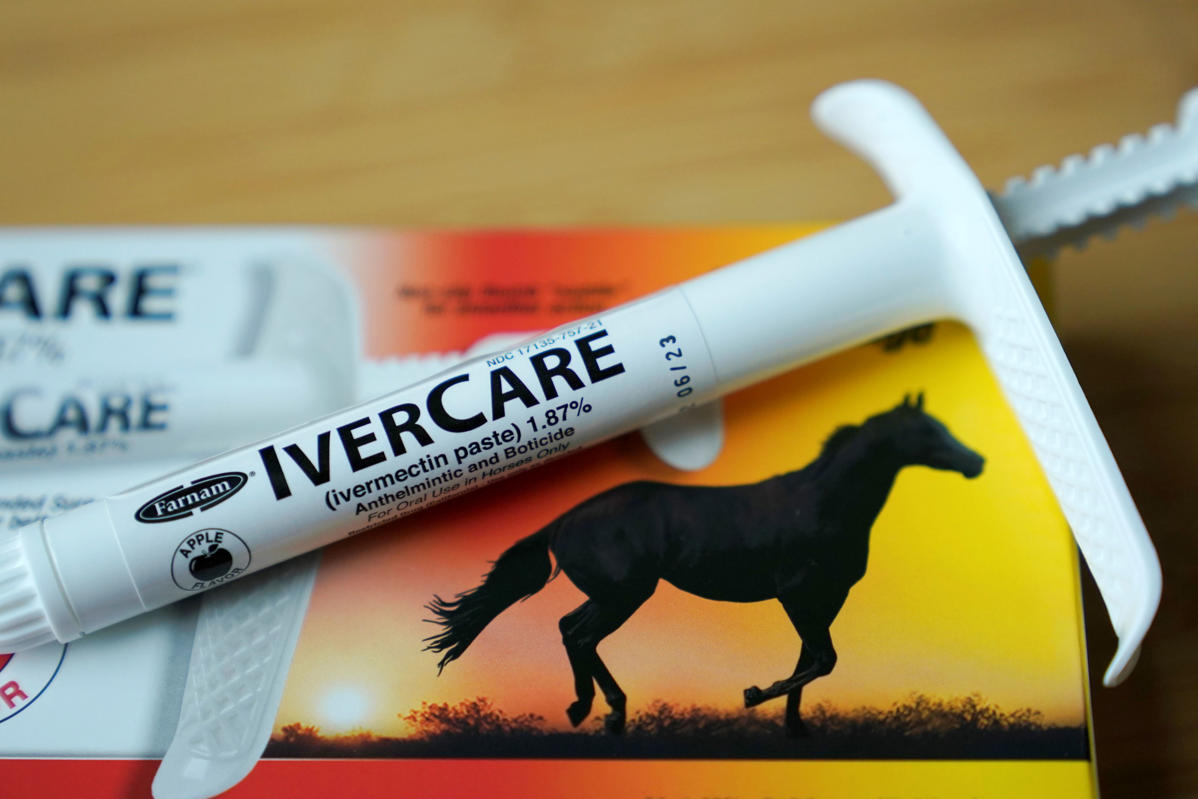 © Provided by Associated Press FILE – In this Sept. 10, 2021, file photo, a syringe of of ivermectin — a drug used to kill worms and other parasites — intended for use in horses only, rests on the box it was packaged in, in Olympia, Wash. At least two dozen lawsuits have been filed around the U.S., many in recent weeks, by people seeking to force hospitals to give their COVID-stricken loved ones ivermectin, a drug for parasites that has been promoted by conservative commentators as a treatment despite a lack of evidence that it helps people with the virus. (AP Photo/Ted S. Warren, File)

NEW YORK (AP) — Mask rules, vaccination mandates and business shutdowns have all landed in the courts during the COVID-19 outbreak, confronting judges with questions of science and government authority. Now they are increasingly being asked to weigh in on the deworming drug ivermectin.

At least two dozen lawsuits have been filed around the U.S., many in recent weeks, by people seeking to force hospitals to give their COVID-stricken loved ones ivermectin, a drug for parasites that has been promoted by conservative commentators as a treatment despite a lack of conclusive evidence that it helps people with the virus.

Interest in the drug started rising toward the end of last year and the beginning of this one, when studies — some later withdrawn, in other countries — seemed to suggest ivermectin had some potential and it became a hot topic of conversation among conservatives on social media.

The lawsuits, several of them filed by the same western New York lawyer, cover similar ground. The families have gotten prescriptions for ivermectin, but hospitals have refused to use it on their loved ones, who are often on ventilators and facing death.

There has been a mix of results in state courts. Some judges have refused to order hospitals to give ivermectin. Others have ordered medical providers to give the medication, despite concerns it could be harmful.

In a September case on Staten Island, state Supreme Court Judge Ralph Porzio refused to order the use of ivermectin in a situation where a man sued a hospital on behalf of his ill father, citing its unproven impact.

“This court will not require any doctor to be placed in a potentially unethical position wherein they could be committing medical malpractice by administering a medication for an unapproved, alleged off-label purpose,” he wrote.

It’s astonishing, said James Beck, an attorney in Philadelphia who specializes in drug and medical device product liability and has written about the influx of cases. “I’ve never seen anything like this before.”

In some cases, an initial order to give the drug has been reversed later.

Hospitals have pushed back, saying their standards of care don’t allow them to give patients a drug that hasn’t been approved for COVID and could potentially cause harm, and that allowing laypeople and judges to overrule medical professionals is a dangerous road to go down.

“The way medicine works is, they are the experts, the doctors and … the hospitals,” said Arthur Caplan, professor of bioethics at New York University’s Grossman School of Medicine. “When you go there, you’re not going to a restaurant. You don’t order your own treatments.”

“You can’t have a medical field that’s subjected to having to practice according to patient demand backed up by court orders. That is positively horrible medicine” Caplan said.

Ralph Lorigo doesn’t see it that way. The attorney from Buffalo, New York, filed his first of several ivermectin lawsuits in January after being approached by the family of an 80-year-old woman who was in the hospital on a ventilator. His second case was later that month, for a hospitalized 65-year-old woman.

In both cases, judges ordered hospitals to give the women get ivermectin as their families wanted. Both women survived their hospitalizations.

Lorigo, who has taken on numerous cases since, is adamant that ivermectin works. Health experts and federal agencies say that any evidence of it being effective against COVID-19 is slim and more research needs to be done. Studies are currently underway.

Ivermectin is approved by the Food and Drug Administration to treat infections of roundworms, lice and other tiny parasites in humans. The FDA has tried to debunk claims that animal-strength versions of the drug can help fight COVID-19, warning that taking it in large doses can cause nausea, vomiting, diarrhea, seizures, delirium and even death.

Lorigo said his clients haven’t sought those kinds of doses, only the versions of the medication made for humans.

Of doctors refusing to treat patients with ivermectin, Lorigo said, “they are not gods because they wear white jackets,” he said. “I take issue with their stance.”

And as for hospital administrators, “it’s like only they rule the roost, only they make a decision in their hospital. I’m not accepting that as a rule of law for us.”

The court fights over the drug have taken place as courts have also wrestled with issues like whether employers or states can order workers to be vaccinated against the virus, which has killed more than 700,000 people in the U.S.

Beck, the drug liability lawyer, said that doctors do have the power to prescribe ivermectin to treat COVID, even though it hasn’t been approved by the FDA for that disease, if they think it has therapeutic value — a so-called “off label” use.

“I have never seen a case before this where the judge was asked to force someone to engage in an off label use,” he said.

Lorigo said he has received more inquiries from families about the drug in the last 10 weeks and now has four attorneys working on these cases, including two he recently hired.

Omicron threat: All International passengers being tested in Karnataka as part of tightened COVID-19 precautions

A Cabinet minister said she was “surprised” and “disappointed” at reports French President Emmanuel Macron had branded Boris Johnson a “clown”. Work and Pensions Secretary Therese Coffey was responding to ... Read more »

Omicron is spreading: Officials confirmed the first case in the United States on Wednesday. Yet there are also signs it may not be as harmful as some feared. Which means ... Read more »

The most telling moment in Wednesday’s virtual introduction of Max the Met came at a time you wouldn’t expect. It confirmed for the public record that Steve Cohen, after a ... Read more »

A 3-year-old girl who died on Wednesday at a hospital was accidentally shot in the Stockyards area in Fort Worth, authorities said. Cassity Jackson died in the Cook Children’s Medical ... Read more »

On today’s What America’s Thinking, a new Hill-HarrisX poll reveals 62 percent of voters are concerned about the Omicron variant. Read more »

UPDATE: A federal judge sentenced Dickson on Nov. 29, 2021, to 32 years in prison. A Louisville man was arrested Thursday after he allegedly pretended to be an 11-year-old on ... Read more »

© Reuters/ALY SONG People walk along at financial district of Lujiazui in Shanghai SHANGHAI (Reuters) – A European business group said on Thursday that technical standards were a “new battleground” ... Read more »

© BBC To his listeners, William Neil “Doc” Gallagher was known as the “Money Doctor” – a charming financial guru who advertised his services on Christian radio, broadcast all over ... Read more »

© Provided by Daily Mail MailOnline logo She’s known for showcasing her incredible sense of style both on and off the red carpet.  And Jenna Coleman made a statement when she ... Read more »

Instagram CEO to testify before Congress for the first time

Singapore-Australia VTL: 8 unique things to do in Australia if you are planning a trip