Lauren Phillips has spoken about her personal life following her divorce from Lachlan Spark after one year of marriage.

The KIIS FM star bared all while speaking to the Herald Sun this week, calling herself a ‘disaster of a human’.

‘The first thing I learnt in this job is basically your privacy is gone and you talk about your personal life a lot which is different to any job I have had before,’ she said.

Lauren explained she was happy to part of a team where nothing was off the table, before adding she was also in the right headspace for it.

‘It is no secret I had a pretty rough two years but it is really nice to be back in Melbourne in a job I have dreamt of having for a long time,’ she said.

‘Life is not what it seems on the surface to most people. It certainly was not polished and it was not perfect but I have come out the other side.

‘I have tried to do it in good humour and stay as positive as I can.’ 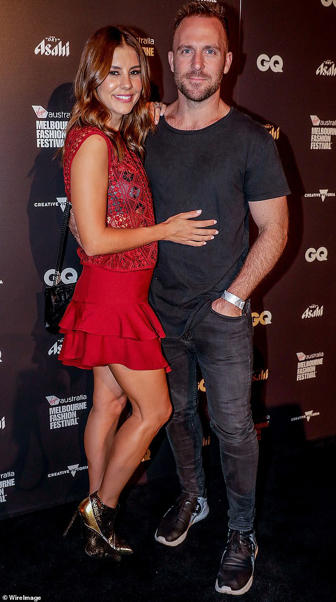 Lauren hit the headlines when she split with Lachlan Spark back in 2018, after just one year of marriage.

She is now dating private jet operator Paul O’Brien, who is also believed to be the ex of former Sunrise star, Samantha Armytage.

She admitted on KIIS 101.1’s Jase & Lauren in the Morning the relationship ended badly after she ‘sacrificed her own health’ trying to make things work.

‘It didn’t end well. When you’re an adult it’s not a hard exit; it was a really slow, drawn breakdown process. We were together for seven years,’ Lauren said this month.

‘We decided to buy a house, renovate a house, start a new business and get married at the same time, so there was this extensive pressure bubble we had put ourselves in, and there was a myriad of other issues playing along with that.’

Lauren continued: ‘That made me break down very quickly, but I was determined to try everything I possibly could and that meant sacrificing my own health in the end, and that is why I almost had a nervous breakdown.’

She went on to say she was ‘proud’ of how she handled the break-up – in what was perhaps a subtle swipe at Lachlan for criticising her publicly after their split.

The former Weekend Today presenter was married to Lachlan, a TV producer who now runs his own creative agency, before calling it quits in December 2018.

The pair had dated for six years before tying the knot on the Mornington Peninsula in 2017.

Lauren then became emotional as she admitted it took her ‘a really long time to talk about’ her marriage breakdown.

‘I had a really tough eight months that took a lot of support from people around me to get through… I’m just so grateful I’ve come out of the other side,’ she said.

Following their break-up, Lachlan accused Lauren of ‘caring more about herself’ during their relationship and said he’d wasted years of his life with the wrong person.

The Nine personality recently sparked rumours they were secretly engaged after she was spotted sporting a ring at Sydney Airport.

Kashmir students who cheered for Pakistan booked under terror law

Budget 2021: Living wage and minimum wage increases to be announced in Wednesday's budget

© The Independent Singapore Warning: Readers may find some of the detailed descriptions in the content of this article disturbing. Singapore — A Singapore Management University (SMU) student who molested ... Read more »

The mother of two murdered sisters has dismissed an apology from the Metropolitan Police after the force’s response to their deaths was found to be below standard. Nicole Smallman, 27, ... Read more »

The Supreme Court is scheduled to pronounce on Wednesday its verdict on a batch of pleas seeking independent probe into the Pegasus snooping matter. A bench comprising Chief Justice N ... Read more »

Assam eased COVID-related restrictions on Tuesday, limiting the night curfew from 11 pm to 5 am, in view of the improvement of the situation in the state, officials said. Issuing ... Read more »

Oct. 26—Cherokee Sheriff's Office detectives are looking to interview two people who were at the Oct. 17 shooting that claimed the life of 14-year-old Landon Andrews and injured a 19-year-old. ... Read more »

UK public sector workers: how do you feel about the pay freeze being lifted?

Millions of public sector workers will have their pay freeze lifted as the chancellor prepares to make an announcement during the autumn budget on Wednesday. We would like to hear ... Read more »

Exclusive-German govt expects inflation to surge to 2.9% in 2021 - source

Illustration: Depositphotos.com Four Dutch residents have been arrested as part of an international crackdown on sales of illegal goods on the dark web. Police confirmed reports by investigative TV programme ... Read more »

Longtime baseball fans have heard the name Dusty Baker for years. Baker first appeared on the MLB scene in 1968 when he made his Major League debut for the Braves ... Read more »

The Astros have consistently been among the best teams in baseball over the past several years, and few have made an impact quite like Jose Altuve.  The franchise second baseman ... Read more »

Women protest the world's 'silence' over crisis in Afghanistan

Women activists in Kabul held up signs that read “why is the world watching us die in silence?” on Tuesday, protesting the international community’s inaction on the crisis in Afghanistan. ... Read more »

The New Side Hustle: Helping Anti-Vaxxers Get Religious Exemptions

The spike in anti-vaxxers seeking religious exemptions from the COVID-19 vaccine is creating a cottage industry of pastors, lawyers, and activists offering help with crafting letters that they say can ... Read more »

Tips, Tricks And Hacks To Give You Perfectly Flaky Pastry Every Damn Time

Making pastry is one of those baking things that can seem seriously overwhelming. They make it look crazy-hard on the The Great British Bake Off, right? © Getty Images Pastry ... Read more »

On a video posted on The Ramsey Show – Highlights YouTube channel in 2020, Dave Ramsey offered guidance to the couple on how they can get a little “more comfortable” ... Read more »

Anita Dobson has revealed that she “went into shock” amid her husband Brian May’s health battles. The actress appeared on ITV magazine show Lorraine in an interview with stand-in presenter ... Read more »

KGF: Chapter 2: Prashanth Neel wishes Raveena Tandon on birthday; Says 'no one would play Ramika Sen like you'

© Provided by Pinkvilla After the humongous success of the Yash starrer KGF: Chapter 1, fans and audiences are eagerly waiting for the sequel of the movie. With a star-studded ... Read more »

© Getty Dave Chapelle (1).jpg Dave Chappelle has spoken out after he was accused of being anti-trans over his new Netflix special. The comedian has defended comments he made in ... Read more »

© Provided by News18 Marathi actor Rasika Sunil will soon be getting married to Aditya Bilagi. The two recently visited Goa and the actor has shared a very cute and ... Read more »

© Provided by Pinkvilla In today’s episode, Vedanth rubs his cheeks against Amulya’s, applying Haldi on her. Everyone smiles and Suhasini thinks she has to stop the wedding, and teach ... Read more »

© PA Images Gennaro Gattuso, Paulo Fonseca TEAMtalk A new favourite has emerged in the running to become the next manager of Newcastle United, according to reports. Steve Bruce was ... Read more »

Did Shilpa Shetty fulfill her 'mannat' for Raj Kundra's bail by shaving her head off in an undercut?

© Provided by BollywoodLife.com A few days ago, Shilpa Shetty left her fans jaw-dropped after she decided to get a bold undercut. Showing off her undercut, Shilpa had added that ... Read more »

Happy Birthday, Raveena Tandon: When the KGF 2 actress REFUSED to cry on Simi Garewal's show saying, 'Why would I want to make a public spectacle of it?'

© Provided by BollywoodLife.com It’s Raveena Tandon‘s birthday today. The gorgeous actress turns fabulous 47! However, she doesn’t look it. The actress has been ruling hearts in the 90s with ... Read more »

© Provided by Pinkvilla Bigg Boss 15 is all about endless twists and controversies and each episode brings on a new turn in the game. Recently, the popular reality show ... Read more »

© Provided by Pinkvilla The Narcotics Control Bureau has filed a response to Aryan Khan’s bail plea in Bombay High Court on Tuesday. According to a report published in Bar ... Read more »

© Provided by T3 WhatsApp WhatsApp for Android is getting a bunch of new features thanks to a new beta update. It follows a busy couple of months for the ... Read more »

Broadcaster Anthony Taberna on his facebook live earlier on October 20, had criticized Nobel Peace Prize awardee, Rappler CEO Maria Ressa, and claimed that the latter only won because of ... Read more »

© NASA/Frank Michaux The Orion spacecraft for the National Aeronautics and Space Administration’s Artemis I mission, fully assembled with its launch abort system, being lifted above the Space Launch System ... Read more »

China locks down city of four million over Covid cases

Salman Khan calls Iulia Vantur to pose for the paparazzi, fans wonder what's wrong as she walks away

WhatsApp to stop working on millions of phones from next week

The psychology of masks: why have so many people stopped covering their faces?