The 53-year-old who was coined by the European press as the “princess of pop” was struck down with breast cancer at the age of 36. Whilst travelling the world on tour she was forced to put her entire life on hold as she received the shocking diagnosis. For her after that moment “everything changed”.

The singer explained: “Cancer changed many things forever, and then some things did not change at all.

“My view of the world was different, my destination, for the most part, was the same.

“It’s like the earth had kind of slipped off its axis. You see everything differently.”

For the singer, illness made her even more “passionate about all the people and all the things that I love. But at the same time, life as I had always known it was on hold”. 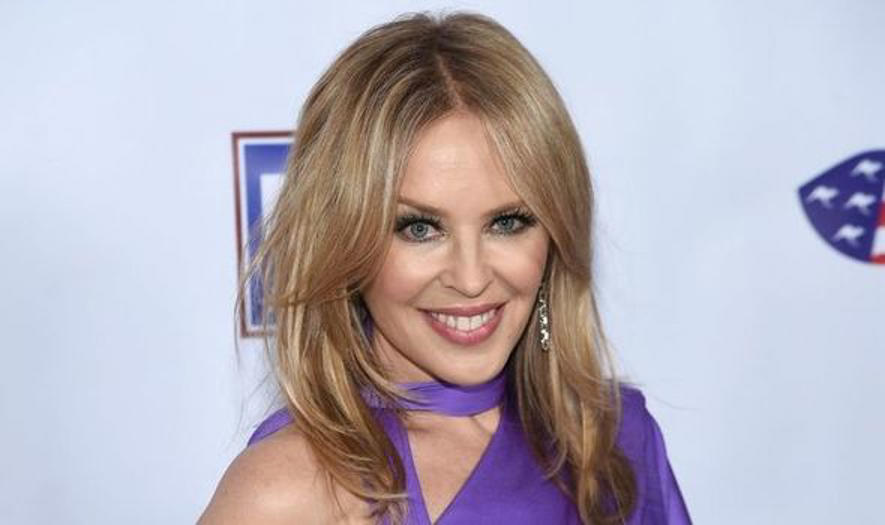 Going through the motions of her diagnosis, the singer revealed to People that she doesn’t like to dwell on the past, but also finds it incredibly difficult to sum up in one neat sentence what happened to her and everything she experienced.

She said: “It’s a huge change, and it is before and after. Now with what’s happening in the world, there’s a lot of people talking about a new normal, but I think after cancer or any other big, life-changing incident or illness, you have to adapt.

“People shone so bright for me in those dark days. The strength my family showed was extraordinary. The love, support and the kindness of strangers! I was so very aware of, and grateful for, all that had gone before me.”

After the diagnosis Kylie then underwent a lumpectomy and chemotherapy. This caused disruption to her career with her having to pull out of her Glastonbury festival performance and cancelling the remaining dates of her Showgirl: Greatest Hits tour.

However, the surgery and radiation treatment was worth it and the iconic singer was given the all-clear one year later.

Now she is settled in a happy relationship with boyfriend Paul Solomons – creative director of British GQ – and although her future of having children might look uncertain, there might be wedding bells in the future, although there has been no official announcement from the Australian singer.

Around 5,000 women under the age of 45 are diagnosed with breast cancer every year. It is also the second most commonly diagnosed cancer in under 30s.

The first symptom of breast cancer that most individuals face is a lump or an area of thickened tissue in the breast.

Women aged 18-25 are now being urged to check themselves as charity CoopaFeel! said young people often do not realise they are at risk, as it is much common in older people.

However NHS guidelines suggest that you should seek advice from a GP or medical professional if you notice any of the following:

Other risk factors in addition to age include family history. If you have close relatives who have had breast cancer or ovarian cancer, you may have a higher risk of developing breast cancer.

The genes TP53 and CHEK2, are also associated with an increased risk of breast cancer. However, because breast cancer is the most common cancer in women, it’s possible for it to occur in more than one family member by chance. 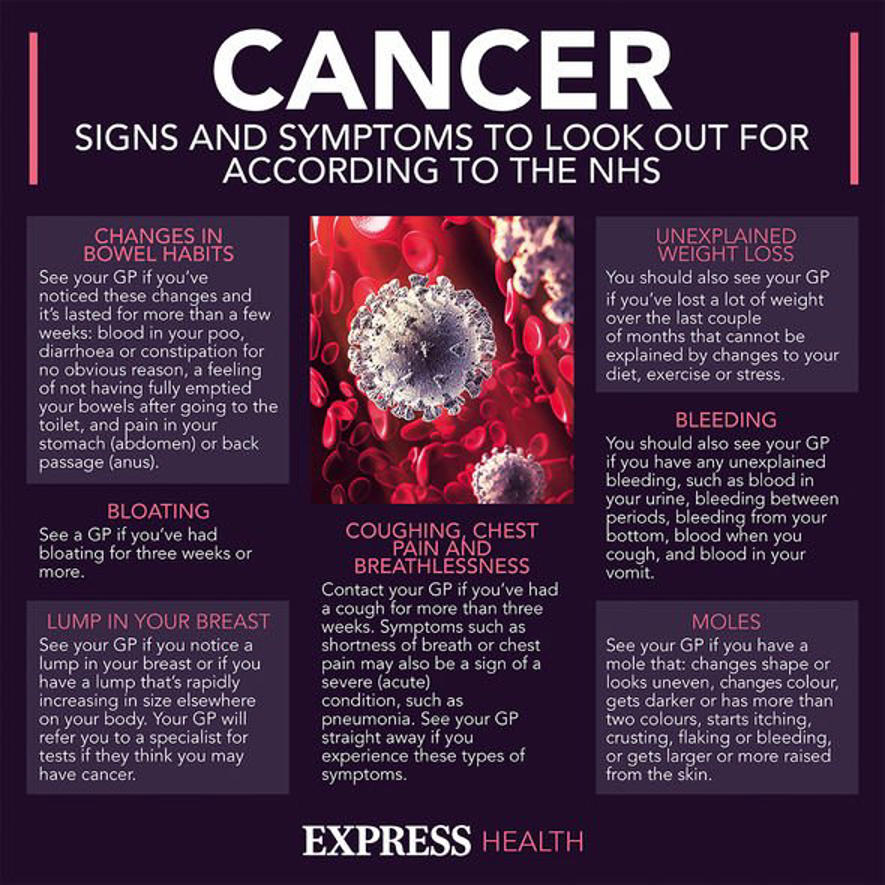 In order to minimise the risk, or catch the condition in its early stages women are advised to check their breasts once a month. For menopausal women and men, it’s wise to check your breasts on the same day each month.

Charity Walk The Walk assures people that “the earlier breast cancer is detected, the greater the chance of successful treatment and cure”.

Checking your breasts is simple and does not need any particular training. It is essential to check your upper chest and armpits as well as the whole of the breast area.

When checking your breasts follow these simple steps- touch, look, and check and ask yourself the following:

Stuart Broad: 'The Gabba holds the key to the Ashes'

UK gas supply MAPPED: Where Britain gets its gas from - & why we're not reliant on Russia

Inside Queensland's COVID wards as medics brace for patient influx

Marcus Mariota off IR, back on Raiders active roster

Oct. 16—Russell Police responded to a reported burglary alarm at Matt's Gold and Pawn at 1:31 a.m. Friday night. It is at 1580 Diederich Blvd. Upon arrival, units discovered that ... Read more »

Robert Bathurst, Thaddea Graham and Blake Harrison are among the guest actors who will be appearing in the upcoming series of Doctor Who. They will be joining regular stars Jodie ... Read more »

Kriti Sanon did not take long to mark her territory in the industry. From her acting skills to her dress sense, she’s got it all! Apart from her glamorous street ... Read more »

© Morgan Treacy INPHO Knockmore players celebrating last year’s Mayo final success. CHAMPIONS KNOCKMORE ARE back in the Mayo senior quarter-finals as they bagged the victory they needed in their last group ... Read more »

After years of phones getting larger, Apple has once again taken the opposite direction by launching another small iPhone. The $699 iPhone 13 Mini is the cheapest device in Apple’s ... Read more »

Netflix fired an employee for sharing “confidential, commercially sensitive information” outside of the company about Dave Chappelle’s controversial stand-up special “The Closer,” the company confirmed to CNN on Saturday. The ... Read more »

British Prime Minister Boris Johnson has laid flowers at the church where an MP was stabbed to death a day earlier, in what police say was a terrorist attack probably ... Read more »

A 21-year-old woman in Oklahoma has been found guilty of first-degree manslaughter after suffering a miscarriage last year. © Provided by People Getty Crime scene tape On Oct. 5, Brittney ... Read more »

© Provided by Dot Esports It hasn’t been an easy run through the 2021 World Championship for Fnatic, winless through the first three games of their group stage performance. Before ... Read more »

When Does Overwatch Halloween Terror 2021 End?

Every year when October begins and Halloween is fast approaching, games launch a slew of Halloween-themed events, cosmetics, and sometimes even game modes to keep their games fresh with new ... Read more »

DC FanDome revealed a brand new mobile game based on the characters of the DC Universe. Titled DC Heroes & Villains, not much information was unveiled for the game other ... Read more »

How to Unlock the 'Scalpel' Green Dot Reticle in Warzone

The “Scalpel” reticle is quickly gaining traction as the best ADS cosmetic offering available in Warzone. Warzone has long been an battle royale won by those exploiting the smallest of ... Read more »

© Provided by SowetanLive Instead, Ramaphosa focused on campaigning when he visited Tshwane with just over two weeks before the November 1 local government elections. Joined by ANC national executive ... Read more »

Nearly 1,000 people flocked to a Times Square rally Saturday to protest the COVID-19 vaccine and mandates that they get jabbed. Some participants wore T-shirts or carried signs that read ... Read more »

Sir David Amess MP, who was killed in a fatal knife attack on Friday – Getty Sir David Amess received an “upsetting” threat in the days leading up to the ... Read more »

The Dodgers confirmed that right-handed reliever Corey Knebel will make his second consecutive postseason start.  Los Angeles made the announcement that Knebel will start against the Braves for Game 1 of the ... Read more »

© Provided by NBC Sports Cardinals center Rodney Hudson won’t be on the field in Cleveland on Sunday and he’ll miss at least two more games as well. The Cardinals ... Read more »

© Provided by Hindustan Times The farmers protest has been on at the Singhu border and at the other locations for months; on Sunday, even the last rites of a ... Read more »

© Provided by Hindustan Times Punjab power surplus was also a key platform for Sukhbir in the previous regime; now he claims the state has failed to keep pace with ... Read more »

A new ad about the Virginia governor’s race mocks former President Donald Trump for not traveling to the state to campaign on behalf of Republican contender Glenn Youngkin. © Win ... Read more »

If you're tired of high gas prices, here's how to rent an electric (or hybrid) car

Commons Speaker: We must end the hatred aimed at our MPs

Photograph: Anadolu Agency/Getty Images The Speaker of the House of Commons, Sir Lindsay Hoyle, has demanded “an end to hatred” against MPs and a kinder form of political discourse following ... Read more »

(Independent) Police have been given six more days to question the man suspected of murdering Sir David Amess in a terrorist attack. The 25-year-old man is being detained for questioning ... Read more »

Pump prices for petrol and diesel are near a record high

(PA) Motorists are paying almost record-high prices for petrol, according to new data. The average price for a litre of petrol is 140.22p on average. This is less than 2p ... Read more »

A ‘badly decomposed’ body has been found in a derelict pub in east London. © PA Archive Police say a man has died after a suspected gas explosion The corpse ... Read more »

If getting the population vaccinated is a bit like climbing a metaphorical mountain, Alfred Ncube and his team play their part by literally wending their way up remote, rough rural ... Read more »

MAN City ace Jack Grealish partied with a team-mate who is alleged to have raped a girl just hours later. The £100million star and fellow ace Riyad Mahrez were at ... Read more »

I CONFESS to shedding a few tears when I heard of the brutal death of David Amess, as I thought of his family which I know he loved so much. ... Read more »

“This is a family that sticks together,” Ghislaine Maxwell’s older brother, Ian, said in a new interview with the Telegraph. ABC News A member of the infamous Maxwell clan says ... Read more »

Beyoncé Stuns In Venice With Jay-Z At Tiffany Exec's Wedding

Guest Column | My journey from the fourth estate to PR

Britney Spears ‘disgusted' by conservatorship and ‘fearful' over its ending

Labor flexes its muscles as leverage tips from employers to workers