Kourtney Kardashian has been accused of acting “quite bratty” while on a recent business class flight with her beau Travis Barker.

The pair were reportedly getting ready to take off from Los Angeles to New York with Delta Airlines when the Blink-182 drummer, 45, lost his mobile phone between two seats. 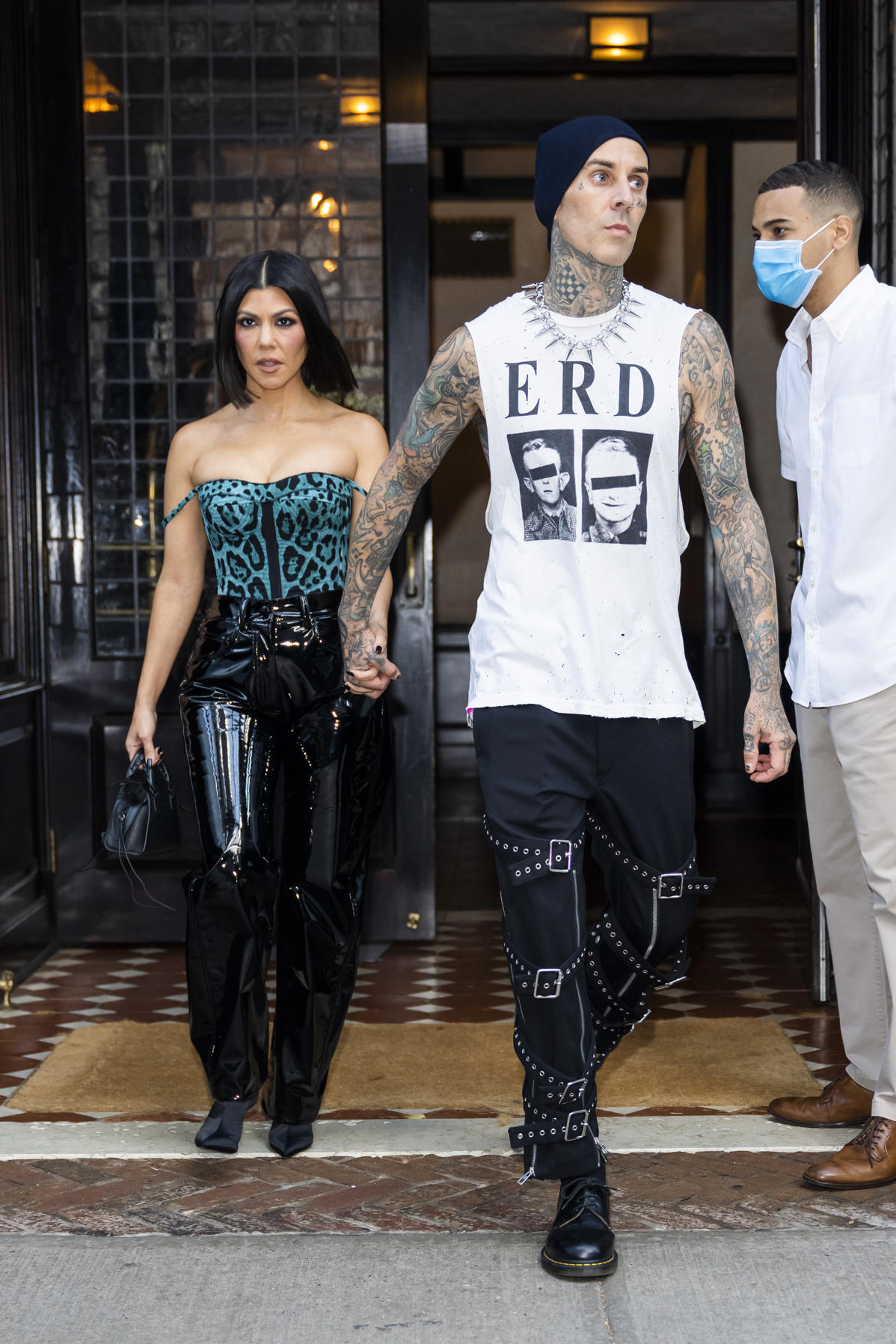 Passengers were left fuming after their flight was delayed due to the couple asking for time to search for the missing phone, according to Page Six.

“She got into a bit of a kerfuffle and was quite bratty. She was not nice and was very much acting like a child,” a passenger told the outlet.

“She was freaking out and kept saying, ‘give me five more minutes.'”

They eventually retrieved Barker’s phone after the flight attendant spent “the next two hours… dismantling the chair,” the witness said.

Meanwhile, a source close to the Keeping Up With the Kardashians star denied that claim, saying the chair “only took five minutes to dismantle!”

“She didn’t ask for five more minutes, and the flight attendant felt so bad for rushing her, she apologised and made an announcement to help them on the flight. The passenger is exaggerating,” they added.

The claims come after Kourtney, 42, travelled with Barker to support him as he performed on Saturday Night Live alongside Young Thug. The couple packed on the PDA while backstage for the show on October 16.

Barker, who survived a fatal plane crash in 2008, says he now feels “invincible” travelling with his girlfriend.

“I’m invincible when I’m with her,” Barker told Nylon Magazine of Kourtney. “It’s like I never dreamed, I never even considered flying again.”

In the fatal 2008 crash, four people were killed: the two pilots and Barker​’s personal assistant and security guard, who he called his best friends. The rock star developed a fear of flying and would take a tour bus to travel to Blink-182 gigs.

“I was dark… I couldn’t walk down the street,” he told Men’s Health in May. If I saw a plane [in the sky], I was determined it was going to crash, and I just didn’t want to see it.”

‘A crazy moment in our lives': Giovanna and Tom Fletcher look back at 'I'm A Celeb' win one year on

The feud started when the 46-year-old rapper, whose real name is Curtis Jackson, had gone wild earlier this week on a series of photos that Madonna had shared on Instagram. ... Read more »

The winter season was well underway in northern Michigan on Wednesday, December 1, as thick snow blanketed parts of Drummond Island in Lake Huron, as seen in this video from ... Read more »

Longest-serving House Republican dismisses GOP critics of McCarthy's leadership: 'Show me anybody else can do the job better'

Rep. Don Young of Alaska.AP Photo/Mark Thiessenm File Rep. Don Young dismissed critics of Kevin McCarthy in a recent interview with The Washington Post. “Show me anybody else can do ... Read more »

Gerri Eickhof grew up without a shower and fridge: ‘My grandmother didn't want to move forward'

NOS reporter Gerri Eickhof (63) grew up without a shower and refrigerator. Not out of poverty, but because of the conservatism of his grandmother, with whom he and his mother ... Read more »

'Strictly' quarter-final: AJ Odudu cries over lift disaster that puts her bottom of the leaderboard

The couple’s lift ended in disaster. (BBC/Guy Levy) AJ Odudu has ended her Strictly Come Dancing quarter-final routine in tears after a disastrous lift left her bottom of the leaderboard. ... Read more »

Will Ferrell, who plays Buddy in the movie Elf. Photo: ANP Also in week 48 of 2021, the necessary new films and series have appeared on Netflix. For example, since ... Read more »

A cocktail party from hell: in court with Ghislaine Maxwell, the society princess

Biden warns Putin he will make it 'very, very difficult' to attack Ukraine after US intelligence says Russia is planning military offensive

Warren Buffett says these are the best stocks to own when inflation spikes — with high prices no longer 'transitory,' it might be time to follow his lead

Warren Buffett says these are the best stocks to own when inflation spikes — with high prices no longer ‘transitory,’ it might be time to follow his lead After months ... Read more »

Bitcoin plunges by a fifth

Wall Street’s wild ride this week spilled over to the cryptocurrency markets Saturday. Bitcoin plunged by 22% to below $42,000 before paring some of that loss. The sell-off was widespread. ... Read more »

'I love it when it goes wrong': Strictly judges cheer on John and Johannes Salsa stumble

At 48, Kate Beckinsale's Legs Are Legendary In A Sheer Minidress On Instagram

Parents Of Michigan Suspect Found In Warehouse, Bond At $1 Million

Despite everything, Pakjesavond can continue, Sinterklaas said immediately afterwards. This was previously uncertain, because it became clear that the door of the parcel room would no longer open and that ... Read more »

A horrifying video has emerged showing the father and stepmother of Arthur Labinjo-Hughes tucking into ice cream in their home as the six-year-old boy was left starving and standing alone ... Read more »

Hilaria Baldwin proud of Alec after interview: ‘I take care of you'

Hilaria is proud that the actor gave his first interview about the incident this week. “We get scared and feel downcast when some speak about us and for us. All ... Read more »

Nav Bhatia, the well-known Toronto Raptors ‘Superfan,’ seen at left, is going to have his life story told in a new film that will star actor Kal Penn, shown at ... Read more »

Trump wants to meet me! But first he wants a donation. The naked grift continues | Opinion

So it turns out I’m a friend of Donald Trump’s. In fact, I’m one of his top supporters. Also, my name is Joe. If this surprises you, imagine how I ... Read more »

I'm a Celebrity… Get Me out of Here! star Adam Woodyatt is best known for his time in Walford, playing Ian Beale in EastEnders, but in real life, the actor's ... Read more »

The Associated PressFILE – In this image taken from video, Musician Lenny Kravitz stands in front of one of his photos from his exhibit “Flash”, which is running in conjunction ... Read more »

MOBO Awards 2021: Dave leads the way in nominations - with show set to 'celebrate artistry' of drill rap for first time

The new category has been introduced to "celebrate the artistry" of drill rap, which is currently one of the dominant music genres in the UK. Read more »

DETROIT — James and Jennifer Crumbley, the parents of the teen charged in the Oxford High School shooting, pleaded not guilty to involuntary manslaughter charges on Saturday morning, hours after ... Read more »

Spell Songs II: Let the Light In review – a magical return to nature

Formed to give musical voice to The Lost Words, Robert Macfarlane’s bestselling meditations on British wildlife, this collective of folk alumni triumphed with 2019’s album of the same name, not ... Read more »

More than 60,000 Indians have given up their citizenship in the last five years, while in the same period just over 4,000 people became Indian. Analysts and surveys indicate a ... Read more »

Spy: All Blacks hope to score big with Grins, their new RTD brand

All Blacks Damian McKenzie, Anton Lienert-Brown and former All Black Stephen Donald have taken on the RTD market with the launch of Grins. The first two flavours in the low-calorie, ... Read more »

Spy: Famous faces and designers combine for charity at Christmas

Breast Cancer Cure launched the perfect Christmas present in its “Tees for a Cure” campaign this week with some famous faces fronting the fashion designer-led campaign. Designers of the $59 ... Read more »

As Thomasin McKenzie hits New Zealand screens with two films this month, her schedule hasn’t slowed down. McKenzie, who is currently in New York, is in Last Night in Soho ... Read more »

Spy: A taste of NZ at Sex and the City premiere

The long-awaited Sex and the City revival series comes to screens this month — and Spy can reveal the stars will be toasting with NZ wine at the premiere in ... Read more »

Two weeks ago, De Nijs, who suffers from Parkinson’s disease, said goodbye to his Belgian fans with a performance in Antwerp. It was a “fairly emotional state,” the singer said. ... Read more »

Michael Bublé's Christmas: a TV special, Adam Sandler song and 'loving too much'

Michael Bublé carried one regret after filming his first TV Christmas special – the after-party. “I truly felt rough this morning,” he jokes, holding up a couple of bottles of ... Read more »

Hilaria Baldwin ‘afraid and downcast by opinions and conspiracies'

Hilaria is proud that the actor did his first interview about the incident this week. “We become frightened and depressed when some speak about us and for us. All that ... Read more »

The farewell concert that Rob de Nijs will give in the Netherlands next year will take place in the Ziggo Dome in Amsterdam. The date is not yet fixed due ... Read more »

Hilaria Baldwin ‘scared and dejected by opinions and conspiracies'

Hilaria is proud that the actor did his first interview about the incident this week. “We become frightened and depressed when some speak about us and for us. All that ... Read more »

A Trump-loving former KKK leader who was jailed for beating a Black man is running for office as a Republican in Georgia, report says

Chester Doles at a KKK march in Ocean City, Maryland in 1992.Mark Reinstein/Corbis via Getty Images Chester Doles is running as a Republican for a spot on the Lumpkin County ... Read more »

Here’s How Long Booster Vaccines Take to Replenish Your COVID-19 Immunity COVID-19 booster vaccines can impact your immune system in a different timeline than your first vaccination does, experts say. ... Read more »

Let him be: how McCartney saved roadie from arrest after Beatles final concert

Chris Cuomo Fired at CNN, Effective Immediately: 'This Is Not How I Want My Time to End' — Read Statements

Christine McGuinness: TV star 'trying to be a bit more myself now' after 'amazing' diagnosis of autism