WATFORD, England (Reuters) – Liverpool boss Juergen Klopp hailed Mohamed Salah as the best player in the world after his side’s 5-0 rout of Watford on Saturday, with the Egyptian’s wonder goal and superb assist in the game just the latest examples of his outstanding talent. 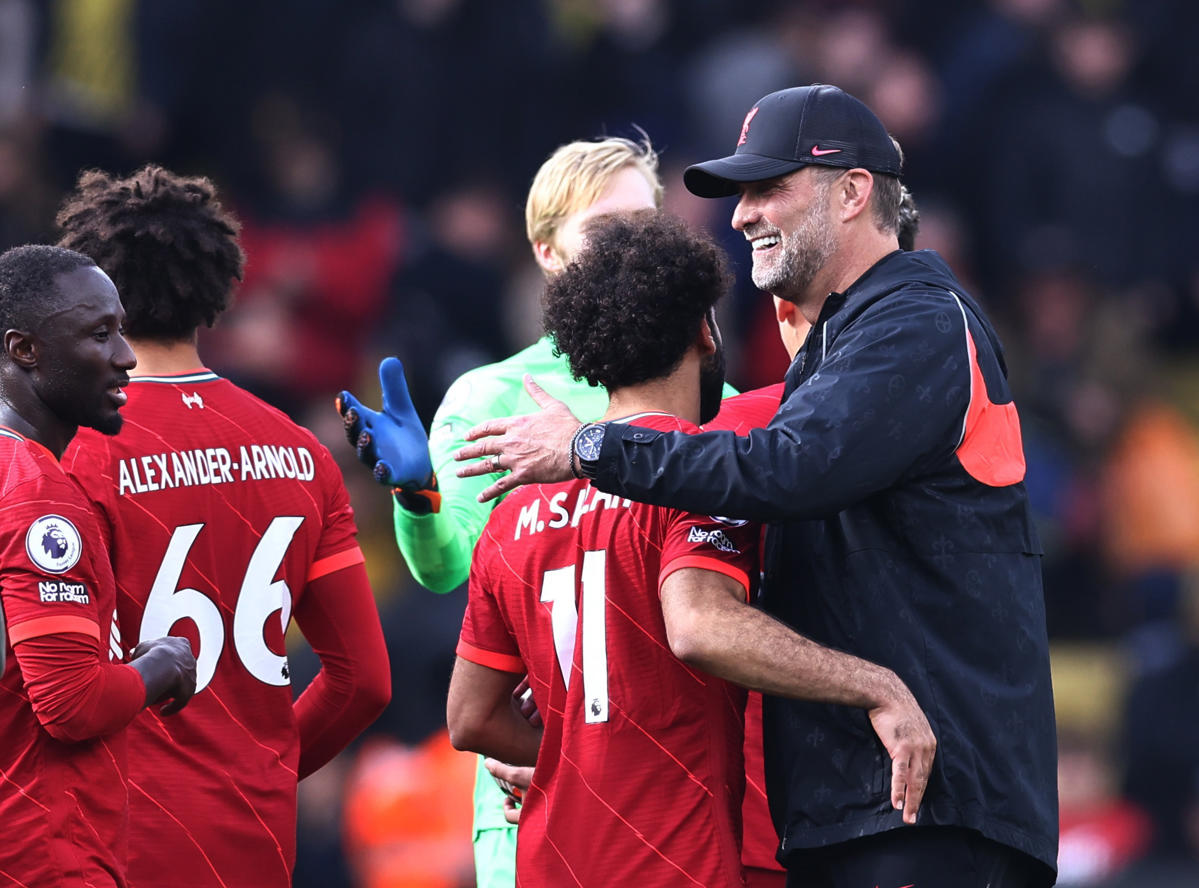 Salah picked out Sadio Mane with a brilliant pass to open the scoring and then added a brilliant solo goal to make it 4-0 as Klopp’s team handed new Watford boss Claudio Ranieri a resounding defeat in his first game in charge.

“Come on, who is better than him? We don’t have to talk about what Messi and Ronaldo have done for world football and their dominance, but right now, he is the best,” a delighted Klopp told BT Sport.

“His (Salah’s) performance was massive today. The pass for the first goal was great, and the second goal was special. He is top. We all see it,” he added.

Many in Klopp’s star-studded squad were away on international duty, but they slotted back into their club side quickly as they set about demolishing Watford.

“After the international break it is hard to find the rhythm after playing different systems, but the boys were so good despite only having one session before today,” Klopp explained.

“I think Watford had ideas, but we didn’t let them play. The goals were really brilliant, there was great attitude, energy and character.”

Former Chelsea and Leicester City boss Ranieri endured a tough afternoon on his return to English football as his side were completely outplayed in the first half, and they only began to string some passes together when they were 4-0 down.

“I think that we conceded too many chances to them. Of course Liverpool is a very fantastic team. When I came I knew I would have to work very, very hard … but I’m sure we can improve. We have to improve,” Ranieri told BT Sport.

College Football Playoff rankings prediction: Should Michigan or Alabama be No. 2?

Injured Sarr could miss African Cup of Nations with Senegal

Jurgen Klopp admits he is baffled by the Ballon d'Or and says it's 'tricky' for any player to beat Lionel Messi to the top prize after Robert Lewandowski missed out... as he insists Mo Salah deserved to be higher than seventh place

Jack Grealish is hoping to overcome his injury troubles in time to make his first return to Aston Villa with Manchester City tomorrow night. The England international has missed City’s ... Read more »

A huge new town made up of buildings named after sweets will soon be built in East London. The new Sweetwater village will bring 772 homes to the redeveloped Olympic ... Read more »

West Brom would add another string to their bow with a transfer move for this Swansea City ace: Opinion

© Provided by Football League World Championship – Swansea City v Cardiff City West Brom are said to be one of a cluster of Sky Bet Championship sides that are ... Read more »

© Provided by Football League World League One – Ipswich Town v Hull City A glut of Sky Bet League One sides including Plymouth Argyle and Portsmouth are weighing up ... Read more »

© Provided by Football League World Championship – Preston North End v Fulham Pundit David Prutton believes league leaders Fulham are at their most vulnerable at the back when they ... Read more »

Did you know these 3 interesting facts about Cardiff City?

© Provided by Football FanCast traore With Liverpool having scored more goals (39) in the Premier League than any other team so far this season, with five scored in the ... Read more »

© PA Images Munster-players-v-Stormers-URC-2021-PA Munster have reported nine new positive Covid-19 cases among their players and staff after the latest round of PCR testing in Cape Town. The Irish province, ... Read more »

© PA Images Adama Traore gets off the coach ahead of a match Liverpool could save a huge amount of money if they buy Wolves winger Adama Traore in the ... Read more »

Ben Maher says that “everything has become reality” as he settles into life as Olympic individual showjumping champion. The 38-year-old British rider produced a dazzling performance under the Tokyo Equestrian ... Read more »

FILE PHOTO: The GSK logo is seen on top of GSK Asia House in Singapore (Reuters) – GSK has hired one of the scientists behind Pfizer's mRNA COVID-19 shot, Phil ... Read more »

1 / 6Right at Home-Outdoor DecorationsThis image provided by Tempaper shows their Christmas Village decals. The decals can be attached to any smooth surface. They’d make an interesting vignette on ... Read more »

© Provided by The South African Manchester United star Cristiano Ronaldo has hit back at a “disrespectful” claim that his only remaining ambition is to win the Ballon d’Or more ... Read more »

Merson: Everton hoping Liverpool clash ‘doesn't get out of hand'