It was a reshuffle already mired in confusion and controversy – with even Sir Keir Starmer’s deputy left in the dark.

Now the Labour leader has been accused of heading up a ‘hardcore’ Remain frontbench team after promoting prominent pro-Europeans.

One of his new top team even called on the country to ‘stop this madness’ and branded Brexit a ‘nightmare’ following the vote in 2016.

On Monday, Sir Keir made David Lammy his Shadow Foreign Secretary, even though he wanted Parliament to overturn the result of the referendum. 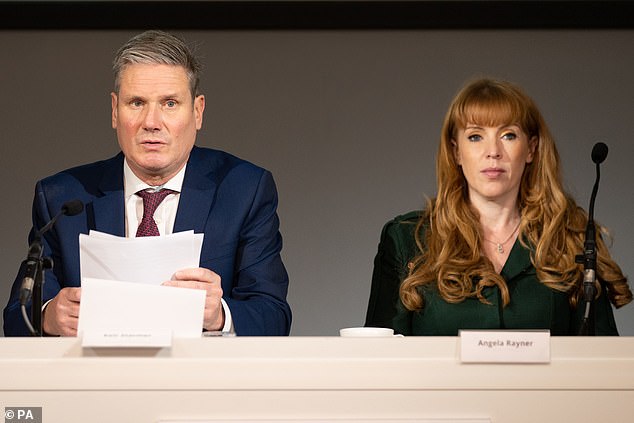 Yvette Cooper, the new Shadow Home Secretary, was a prominent Remain supporter – even though her Pontefract constituency voted Leave.

Bridget Phillipson, who gets the shadow education job, was one of the first Labour MPs to call for a ‘People’s Vote’ on the Brexit deal.

Wes Streeting, who has been promoted to health spokesman, also supported this idea.

Rachel Reeves, who stayed in her role as Shadow Chancellor, backed Remain but her constituency – Leeds West – voted Leave.

However, he is known to be an ardent Remainer who was instrumental in pushing his Eurosceptic former leader into pledging a second referendum.

A Tory source said: ‘With this hardcore Remain Shadow Cabinet, it would be no surprise to see Labour calling for a second referendum again.

‘It seems the only one of his ten leadership pledges Starmer will actually keep to is campaigning for free movement with the EU.’ 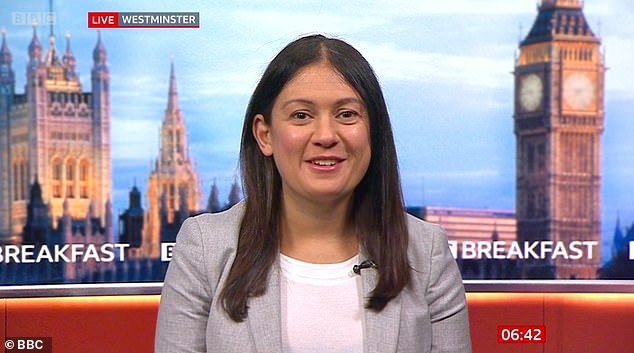 Lisa Nandy, who will shadow Gove in his levelling up department, denied Labour is moving to the Right of the political spectrum – saying it was instead targeting the North of the country

Just two days after the Brexit vote, Mr Lammy tweeted: ‘Wake up. We do not have to do this. We can stop this madness and bring this nightmare to an end through a vote in Parliament.

‘The referendum was an advisory, non-binding referendum. The Leave campaign’s platform has already unravelled and some people wish they hadn’t voted Leave.

‘Parliament needs to decide whether we should go forward with Brexit, and there should be a vote in Parliament next week. Let us not destroy our economy on the basis of the lies and hubris of Boris Johnson.’

He was also one of a number of Labour MPs who voted against the triggering of Article 50.

In July 2018, Mr Streeting said of then-prime minister Theresa May: ‘Her only way out is to take the decision to the British public and back a People’s Vote on the final Brexit deal.’

Yesterday Lisa Nandy, who will shadow Michael Gove in his levelling up department, denied Labour is moving to the Right of the political spectrum – saying it was instead targeting the North of the country.

‘We’re going out into the country and we’re going to start delivering for people in towns, villages and cities that have been completely and utterly abandoned by the political system.

‘You go to Grimsby, you go to Barnsley, you go to Aberdeen, you will find proud communities that have a contribution to make.

‘But so often they are held back, not by the skills of their young people, not by the abilities in those communities, not by their own ambition, but by a national Government that isn’t investing in the infrastructure that would bring good jobs.’

Mrs Rayner admitted after a speech on Monday that she had not been aware of ‘the timing of’ his reshuffle.

LIVE – Updated at 08:16 Boris Johnson’s deputy is insisting that the PM may have “taken a few hits” over allegations of parties held in No 10 and other government ... Read more »

Like its disreputable bedfellow the horror genre, film noir is an unruly beast – a term used to unite wildly disparate movies sharing an aesthetic philosophy that is on the ... Read more »

Kim Kardashian takes the plunge in black leather wrap as she swings by LA art gallery... after latest bout of drama with estranged husband Kanye West

Kim Kardashian took the plunge in a slinky ensemble when she was spotted heading to an event at the David Kordansky Gallery in Los Angeles this Saturday. The 41-year-old reality TV ... Read more »

© Provided by The Guardian Photograph: Gary Calton/the Observer Britain’s welfare system is “unfit for purpose” and in urgent need of reform, experts warned on Sunday amid fears that millions ... Read more »

The flying of drones for recreation has been banned in the United Arab Emirates after Yemen’s Houthi rebels claimed a fatal drone attack on an oil facility and major airport. ... Read more »

Lee Bowyer spoke with the press after Birmingham City’s 2-1 victory over Barnsley. He was asked about his side’s performance, the looming transfer deadline, the supporter protests and the performance ... Read more »

© Provided by Bills Wire The Buffalo Bills’ special team unit under Heath Farwell finished in the top 10 for the second consecutive season in Rick Gosselin’s annual rankings. In ... Read more »

Jack Grealish strolling around Wembley in wide-eyed wonder after England’s Euro 2020 triumphs was one of the most wholesome and endearing football images of last year. Childhood dreams were being ... Read more »

Francis Ngannou tells Joe Rogan he wants to go into BOXING after his stunning UFC 270 victory, saying 'It is something I MUST do before the end of my career'

Tory civil war deepens over islamophobia row: Education Secretary Nadhim Zahawi demands probe after former minister Nusrat Ghani says she was told she was being sacked because of her 'Muslimness' - but chief whip brands claim 'defamatory'

Nusrat Ghani was sacked as transport minister in February 2020 in a reshuffle She alleged that she was told by a whip her 'Muslimness was raised as an issue' Ms Ghani claimed she was told faith was 'making colleagues feel uncomfortable'  Mark Spencer identified himself as the person Ms Ghani's claims were aboutThe MP for Sherwood, 52, branded the accusations as 'false' and 'defamatory'  Read more »

Cover your ears! Disney No1 We Don't Talk About Bruno is more catchy than Let It Go

As every parent will testify, few songs have proved more appealing to youngsters than Let It Go from the Disney blockbuster Frozen. But a catchy tune from the studio’s latest ... Read more »

Video: Health boss UNLEASHES on Pauline Hanson for 'disgusting' demand for a Covid inquiry - after she called for investigation into how millions of Aussies had their 'freedom taken away'

'I am a little bit sad, but I have just arrived in this game': Ciryl Gane insists his future is still bright after suffering first loss at UFC 270 in title fight against Francis Ngannou, just THREE YEARS after pro debut

Ciryl Gane looked on course to win the UFC heavyweight title on Saturday He was cruising in first two rounds against Francis Ngannou, who fought back Champion executed unexpected wrestling dominance to win via decision Gane admitted afterwards he is disappointed but is still early in his career  Read more »

Hollywood star Rebel Wilson has gained an unlikely friendship with Sydney-based reality star, Brittany Hockley.  And Brittany shared a number of photos of herself with the star on Instagram on ... Read more »

LIVE – Updated at 08:06 The BA.2 variant of coronavirus, a lineage of Omicron, is under investigation by UK health authorities after it was found to be behind hundreds of ... Read more »

There were disturbing and unsavoury developments as Celtic enjoyed bumpy progress in the Scottish Cup with their 2-1 victory in Alloa. © Celtic’s players show concern for Callum McGregor following ... Read more »

Arsenal’s Granit Xhaka insists he ‘won’t change’, despite receiving a straight red card in the first leg of their Carabao Cup semi-final againt Liverpool. The Swiss international was dismissed for ... Read more »

Although Liverpool’s fortunes have improved recently when it comes to playing Crystal Palace, Selhurst Park is still far from a happy hunting ground for the Reds. In fact, if there ... Read more »

The January transfer window has been a slow one at the London Stadium with West Ham yet to make any major moves in the market. This is despite the fact ... Read more »

Jennifer Lopez was spotted taking her white Bentley convertible out for a spin in Los Angeles over the weekend. The 52-year-old pop star, who is currently on-again with her early ... Read more »

Honor Swinton Byrne: ‘My family could not be more different to the one in The Souvenir’

© Provided by The Guardian Photograph: Suki Dhanda/The Observer You’re an 18-year-old school leaver, working in a florist’s and all set for a stint volunteering in Africa, when your godmother ... Read more »

It rose by 5.4 percent, up from 5.1 percent in November 2021. This is the highest CPI 12-month inflation rate in the National Statistic data series which began in January ... Read more »

Tonga struggles with ash, psychological trauma after eruption and tsunami

Far-right extremists and jihadists must be punished equally, the solicitor general has said amid a rise in terror cases involving neo-Nazis. Government minister Alex Chalk QC made the comments after ... Read more »

© Provided by The Guardian Photograph: John Sibley/Reuters Early last week a call came into the office of a senior cabinet minister from one of Boris Johnson’s team at Downing ... Read more »

Dementia: The 'afternoon snack' that may increase your risk of Alzheimer's - study warning

Dementia is an umbrella term for symptoms associated with worsening brain decline. The main cause is Alzheimer’s disease, which is characterised by an abnormal build-up of proteins in and around ... Read more »

BANGKOK (Reuters) – A 49-year-old Briton was found dead at his home with knife wounds in western Thailand, and a Thai suspect was in custody, police said on Sunday. Another ... Read more »

The collective groan could be heard across the country on Thursday. It was still only breakfast time in Scotland but Andy Murray had already been knocked out of the Australian ... Read more »

Another man, believed to be the victim's friend, is in hospital in a critical condition. Read more »

A number of Aston Villa’s dogged players slumped back on their chairs inside their makeshift away dressing room after their 1-0 win over Everton on Saturday, completely shattered and sapped ... Read more »

© Provided by Transfer Tavern juventus star paulo dybala against inter milan Speaking to Give Me Sport, journalist Dean Jones of Eurosport has made a promising claim as Tottenham Hotspur ... Read more »

West Ham were undone by a last-gasp Marcus Rashford goal in their 1-0 defeat to Manchester United on Saturday. David Moyes’ side battled for 92 minutes at Old Trafford, but ... Read more »

Just when Manchester United looked set to miss out on the chance to climb back into the top-four, Marcus Rashford had different ideas. Stepping off the bench for the second ... Read more »

'I am barred from Russia as a security threat': 'Amused' Ukrainian politician DENIES Putin is trying to install him as a Kremlin puppet leader in Kiev after MI6 uncovered plot