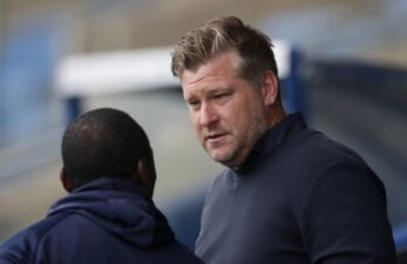 Karl Robinson has labelled Plymouth Argyle as the best team in League One as his Oxford United side prepares to welcome the Pilgrims to the Kassam Stadium.

And it comes in the same week as Bolton Wanderers boss Ian Evatt claiming that his Trotters outfit are the best in the division despite sitting outside the play-off spots.

After finishing in mid-table last season, Ryan Lowe’s Argyle have had a superb start to the 2021-22 campaign as they sit top of the pack after 12 matches – although they have played at least one more match than some of their other early challengers.

The Devon side have not been defeated in the league since the opening day of the season away at Rotherham United and they will be looking to extend their unbeaten streak to 12 as they travel to Oxford this afternoon.

Robinson has links to Lowe from his Milton Keynes Dons days and he has no doubts in his mind that right now Plymouth are the team to beat in League One despite the likes of Ipswich, Sunderland and Wigan Athletic all being in the division.

“It’s an exciting day for us today at the Kassam Stadium as we welcome the best team in the division so far,” Robinson wrote in his Oxford Mail column.

“People have been asking me all week if I am surprised to see Plymouth at the top of the league and I’m honestly not because they have good players who are very well coached by a very astute manager.

“I worked with Ryan Lowe when he was a player and I was his manager, and I have nothing but respect for him and the backroom team down there at Home Park.”

Whilst Argyle may sit at the top of the pack right now, the games in hand of teams around them mean that they might not be there for long.

When it’s all said and done the Pilgrims could be in fifth position by 5pm today if results don’t go in their favour but with the run they’ve been on you’d back them to get at least a point.

It’s not surprising to see Robinson dish out praise to them though considering his relationship with Lowe – the former is younger than the latter yet managed him at MK Dons between 2012 and 2013 so they clearly get on.

It will be all smiles until kick off and then the real games begin as Oxford will be looking to take it to the league leaders.

Nightmare before Xmas: Daithi's wife catches him breaking his tree

Why Is Everyone Talking About Microsoft Stock?

Why Is Everyone Talking About Microsoft Stock? Microsoft (NASDAQ: MSFT) recently became a hot topic after CEO Satya Nadella sold more than half of his shares for about $285 million ... Read more »

Microsoft CEO sells half his stake in the company ahead of new state capital gains tax Satya Nadella sold 838,584 shares between Nov. 23 and Nov. 24. The move comes ... Read more »

Mumbai Mayor Says Covid-19 Vaccination Might Be Made Compulsory, May Impose Fines

(Reuters) – Not all draws are memorable but Rachin Ravindra will certainly remember his debut after helping save New Zealand in the first test against India. The 22-year-old finished unbeaten ... Read more »

Many long Covid patients are suffering from chronic fatigue syndrome (CFS) more than a year after their original infection, a new study suggests. The condition, also known as myalgic encephalomyelitis, ... Read more »

Marian* was just 15 when she met her girlfriend Bea* who was 11 years older than her in the Philippines. Their four-month relationship ended after the teenager found out the ... Read more »

© https://www.123rf.com/stock-photo/gold_mine.html?sti=nxnnkbe3dj772adif8|&mediapopup=28606027 Image: © tomas1111 /123rf.com JOHANNESBURG – Three bodies have been recovered at the Impala Platinum mine in Rustenburg. Rescue teams made the discovery during search and rescue operations ... Read more »

SINGAPORE — No cases of the Omicron variant have been detected in Singapore so far, said Health Minister Ong Ye Kung on Tuesday (30 November). While the Delta variant took ... Read more »

At his lowest point, the man had to beg in big cities to survive But a recommendation from his brother turned his life around, and he has not looked back ... Read more »

50 Promising Young Woman Deathly dark satire of gender politics from writer-director Emerald Fennell, with Carey Mulligan at her ice-cold best as a scheming sociopath in a fearless unpicking of ... Read more »

The Royal Navy and Royal Marines have been training to help break up French port blockades amid rising cross-Channel tensions over migration and fishing rights. Last week, members of the ... Read more »

Singapore to hold off further reopening to evaluate Omicron variant

SINGAPORE (Reuters) – Singapore will hold off on further reopening measures while it evaluates the Omicron COVID-19 variant and will boost testing of travelers and frontline workers to reduce the ... Read more »

A North Korean defector who escaped from prison in northeast China has been recaptured by authorities, after more than 40 days on the run in the biting winter cold. © ... Read more »

Pandemic prognosis: Where does it go from here?

GENEVA: The world could see the Covid pandemic begin fading next year into an endemic disease like others humanity lives with, unless glaring inequality in vaccine access drags it out ... Read more »

Rajya Sabha Chairman M Venkaiah Naidu on Tuesday, November 30, said that the suspension of the 12 MPs will not be revoked. “The members who had committed the sacrilege against ... Read more »

© Provided by Zee News New Delhi: If you are a fan of actress Disha Patani’s dancing skills, then she has got some in-house competition. Confused? Well, don’t be as ... Read more »

Abhishek Kapoor: Ayushmann Khurrana is bridging the gap between tentpole and parallel cinema

© Provided by Radio City When writer-director Abhishek Kapoor was developing the script of Chandigarh Kare Aashiqui, he was certain that Ayushmann Khurrana would be the perfect choice to headline ... Read more »

There are still Cyber Monday Nintendo Switch deals to be had, but you’ll want to be quick about it. The day is draining away, and we’ve seen deals come and ... Read more »

The Kerala Public Service Commission (KPSC) on Monday has released the main exam schedule of plus two level posts. The exam dates are available on the official website of the ... Read more »

Dundee United boss Tam Courts has revealed how Mark Reynolds has backed his decision to pass the captain’s armband to Ryan Edwards. Courts has picked Edwards as his new skipper, ... Read more »

© Provided by Radio City Rekha Bhardwaj has every reason to beam like a proud mother. Her son Aasmaan has roped in some of the finest artistes of Bollywood — ... Read more »

A very important investigation into what people are taking out in those tiny bags.

Fourth single from Pawan Kalyan's 'Bheemla Nayak' out on Dec 1

WhatsApp Pay to get several India-first features, including cashbacks, in the next six months

HCL's valuation discount to peers widens. Is it a good buying opportunity?

IRCTC shares back on track, zoom 6%; should you buy, sell or hold?

Spider-Man: No Way Home Is Not The Last Flick Of The Franchise, Confirms Producer