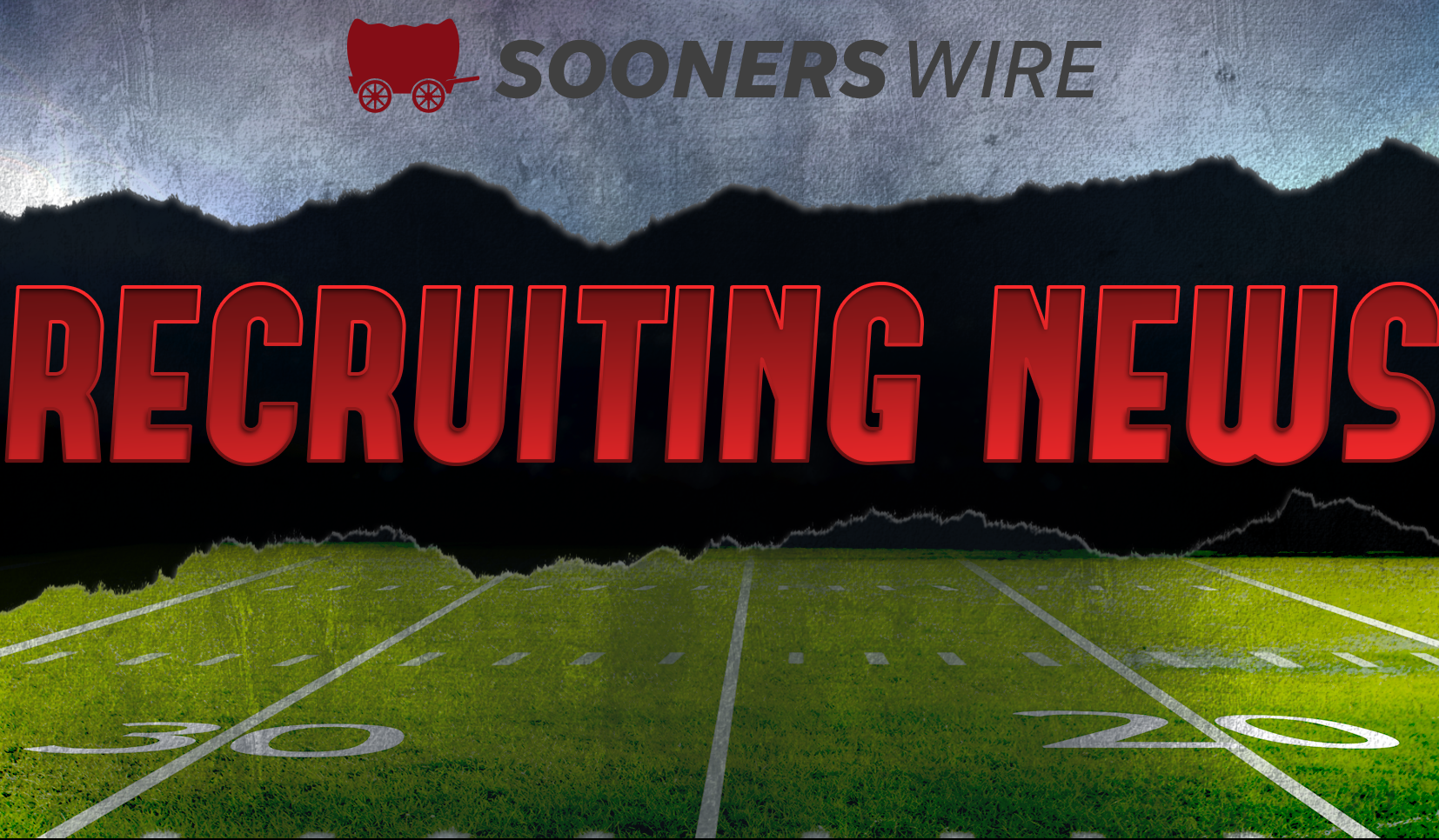 Kaden Helms and Jason Llewellyn gave Oklahoma fans good news to start the week. After the hiring of new head coach Brent Venables had Sooner Nation feeling the warm and fuzzies, Helms and Llewellyn shared that they are sticking with their commitments to Oklahoma’s 2022 recruiting class.

Helms, a product of Bellevue West High School in Nebraska, had some fun with his announcement, too.

Sooner nation, I was going to write some long, drawn out paragraph regarding where my commitment currently stands with the University of Oklahoma. But why not let Fresh Prince do the honors for me? 🙃#OUDNA. pic.twitter.com/5gKhcvUPp4

Helms is rated as a three-star tight end according to the 247Sports composite rankings. The 6-foot-5 tight end actually checks in as a four-star in 247Sports’ own rankings and the site has him as the nation’s No. 16 tight end.

Llewellyn out of Aledo High School in Aledo, Texas, ranks as the nation’s No. 18 tight end according the 247Sports composite rankings.

It helps with Helms and Llewellyn’s recruitments that tight ends and H-Backs coach Joe Jon Finley looks like he’s one of the assistant coaches being retained.

In his introductory press conference, Venables discussed how he plans to sell recruits on sticking with OU.

“Well, I have a career of almost 30 years of being loyal. Just look at my career. If I’ve been something, I’ve been loyal. And so, I haven’t been a coach that’s jumped all over. Taken this job to take this job to take this job. I think that that speaks for itself. Again, it’s not an easy thing to sell, but I do think that they chose Oklahoma for a reason and we always challenge recruits to take the recruiting coach out of it. And just what a wonderful place it is to chase your dreams, to get a great, quality education, to develop holistically. It’s much more than just one person. I recognize that being the head coach has a very important place in all of that. But, again if they’re looking for…again, for me for example, if they’re looking for a program with stability, a program of success. This is a program first of all that’s displayed that on its own and then my career has been exactly that as well. On the biggest stages in the biggest games and have that kind of experience to sell,” Venables said.

Venables was asked if he planned on retaining any of the coaches on the current staff.

“Obviously, you prepare yourself for a long time way before. Every battle is won before it’s fought. That’s the same kind of mindset when it comes to staffing. We’re working through that right now. The same with our current staff. There’s some terrific options right here at home and we’re looking at everything. Obviously, we want to do it sooner rather than later and we’re working aggressively on both fronts,” Venables said.

Venables also said it’s his intention to hire a defensive coordinator. OU has already seen outside linebackers and defensive ends coach Jamar Cain announce his intentions to join the USC staff and it’s fair to expect other changes to be on the way.

Those staffing changes will have a direct impact on Oklahoma’s 2022 recruiting class between now and when the upcoming Early Signing Period begins on Dec. 15.

In the meantime, here’s a comprehensive list of recruits that have announced their intentions to remain with the Sooners.

Clemson safety commit has re-opened his recruitment: Is Oklahoma in play?

What have been the closest TV score abbreviations for two football teams?

Lamborghini Announces Its First NFT, a Space-Themed Artwork; Soon to be Auctioned

The Latest: Osaka advances to 3rd round at Australian Open

© Provided by BollywoodLife.com Shamshera starring Ranbir Kapoor, Sanjay Dutt, and Vaani Kapoor was announced in 2018. The film was supposed to hit the big screens in 2020, but due ... Read more »

When it comes to celebs, the little nuggets of information we always want to know is what their favourite beauty products are, what’s in their handbags and what they can’t ... Read more »

Atletico Madrid striker Luis Suarez is interested in a sensational reunion with Steven Gerrard at Aston Villa. The 34-year-old is likely to leave the Wanda Metropolitano at the end of ... Read more »

'He's going to be a world-beater' - Phil Salt: From Barbados to England via T20 finishing school

© Getty Images Phil Salt is set to make his T20I debut in Barbados © Getty Images Some cricketers are overawed when they represent their country for the first time, ... Read more »

Photo: ANP If it is up to two-time grand slam champion Victoria Azarenka, a vaccination against the corona virus will be mandatory for tennis players who participate in WTA tournaments. ... Read more »

Verstappen will be 'unsatisfied' with manner of his F1 title triumph

Damon Hill believes that Max Verstappen will feel the manner of his Formula One world championship victory was ‘unsatisfactory’ as the motorsport legend labelled the Red Bull star’s title triumph ... Read more »

Kartik Aaryan played football with team of girls in Mumbai. Kartik Aaryan is often found interacting with his fans. Sometimes he obliges them for autographs and selfies and sometimes he ... Read more »

Three things you must consider before starting your weight-loss journey

© Provided by The Indian Express Weight loss is a personal journey, but there are many takers for it. Around the world, there are many diet fads and exercise routines ... Read more »

If you are looking to nail one complex exercise this Wednesday, let it be improving your balance on a BOSU ball and let Bollywood actor Arjun Rampal and fashion designer ... Read more »

Salman Khan might star in a film produced by sister Alvira Agnihotri. It is going to be a busy year for Salman Khan with back-to-back film shoots and releases. The ... Read more »

Anupamaa, 19 January 2022, Written Update: Vanraj and Anupama have differences due to Samar's behaviour

© Provided by Pinkvilla In today’s episode, Anupama tells Samar that when a relationship breaks, it affects everyone. Bapuji and Baa agree with Anupama. Samar tells Anupama broke her relationship. ... Read more »

RIL clarifies on nature of investment in robotics firm Addverb

After KGF 2, Sanjay Dutt and Raveena Tandon to star next in a comedy film! Here's what we know

© Provided by BollywoodLife.com Sanjay Dutt and Raveena Tandon fans there is one more reason to celebrate as their favourite couple is coming back together. After the grand success of ... Read more »

The paparazzi had a busy Wednesday morning in the city as several actors were snapped out and about. Pooja Hegde, Kangana Ranaut, Janhvi Kapoor and Malaika Arora among others stepped ... Read more »

MeitY using AI and ML to speed up citizen services in India: Report

© Provided by CNBCTV18 The Centre has started work on a new project which uses next-generation technology to improve the delivery of citizen services in India. The Ministry of Electronics ... Read more »

Heartbroken Varun Dhawan grieves his driver Manoj Dada's sudden death, says 'he was my everything'!

© Provided by Zee News New Delhi: Actor Varun Dhawan took to his social media handle on Wednesday and mourned the sudden demise of his driver of 26 years, Manoj ... Read more »

© Provided by Hindustan Times The cases have reduced in the last five days with the Delhi health minister on Monday attributing the decline to the weekend curfew. (HT Photo) ... Read more »

© Provided by The Financial Express Twi unidentified bags have been spotted in Delhi’s Trilokpuri area. Police are currently at the spot and trying to ascertain the content present in ... Read more »

German yields turn positive for the first time since 2019; here's what it means

© Provided by CNBCTV18 Benchmark German debt yields climbed above 0 percent Wednesday for the first time since the pandemic started as investors are betting on the central banks to ... Read more »

© Provided by The Financial Express The costume designed by Eggie Jasmin After Harnaaz Kaur Sandhu bringing back laurels to India with the Miss Universe 2021 crown, another India beauty ... Read more »

Naomi Osaka has paid homage to the butterfly which appeared to ‘bless’ her on the court in last year’s Australian Open by wearing sneakers inspired by the insect. The 24-year-old ... Read more »

It was not always clear that Rafael Nadal would make it back to the Australian Open this year, but 20 seasons into his illustrious career, he has developed a knack ... Read more »

Emma Raducanu says Andy Murray was the inspiration behind her first round fightback against Sloane Stephens at the Australian Open. Raducanu started well and looked set fair for a win, ... Read more »

MELBOURNE, Australia (AP) — The Latest on Wednesday from the Australian Open at Melbourne Park (all times local): © Provided by The Canadian Press 7 p.m. Amanda Anisimova is revelling ... Read more »

5 outdoor skating trails to try out in National Capital Region

When it comes to outdoor skating, people who live in the Ottawa-Gatineau area have a lot of options. The entire length of the Rideau Canal opened last Friday, in all ... Read more »

Virat Kohli will be free after relinquishing captaincy, can focus more on batting and family: Dale Steyn

Travis Head moves up to career-best No. 5 in Test batters' rankings after Ashes heroics

Cabinet Approves Rs 1,000 crore for SBI for Waiver of 'Interest on Interest': Sources

Gurugram: Three QRTs to be deployed ahead of Republic Day

Liquor vends in Gurugram may now stay open till 10pm

Vaani Kapoor: Hope filmmakers feel confident to approach me with any role

Ram Kapoor's Luxurious Villa in Alibaug is Nothing Less Than a Paradise, See Pics

Gurugram admin asked to increase use of treated water