Josh Cavallo has made history as the first openly gay footballer.

The 27 year old Australian sportsman plays for Adelaide United based in his home country.

He shared his story on Instagram writing: “I am proud to publicly announce that I am gay.

“It’s been a journey to get to this point in my life, but I couldn’t be happier with my decision to come out. I have been fighting my sexuality for over six years now, and I’m glad I can put that to rest.”

Josh hopes that by being open about his story, he can help to change the landscape of football.

“I hope that in sharing who I am, I can show others who identify as LGBTQ+ that they are welcome in the football community. As the game of football keeps expanding, I want to help evolve the game even further, and let other players in my situation feel that they’re not alone.”

While he is the first footballer to come out, other sports star have also felt proud and empowered to share their sexuality.

Nicola Adams OBE was the first openly gay person to win a Gold Medal for boxing at the Olympics in 2012.

The successful star said, “I went into boxing and I’m bisexual and I still achieved and performed at the highest level and I came away with gold and made history so with that said, anything is possible.”

She continued her trail-blazing after retirement when she become the first celebrity to compete in a same-sex couple on Strictly Come Dancing. Around the time she said, “I’m lesbian not bi, just saying.”

She also spoke about what it meant to some viewers seeing her dance with Katya Jones. “It’s really good to be able to show diversity for the younger generation, as well as to be able to see somebody from the LGBT community.’

In 2013, Tom Daley uploaded a 5 minutes and 26 seconds YouTube video entitled, “Something I want to say…”.

In the emotional video, he came out to his fans.

“I hope that any young LGBT person out there can see that no matter how alone you feel right now, you are not alone. You can achieve anything.”

Tom’s decision to speak about his sexuality inspired footballer Casey Stoney. The former England Captain said, “I feel it’s really important for me to speak out as a gay player because there are so many people struggling who are gay, and you hear about people taking their own lives because they are homosexual. That should never happen.

“How can I expect other people to speak about themselves if I’m not willing to do that myself?”

Gareth Thomas was the first Professional Rugby Union Player to come out as gay.

He has also campaigned for more awareness of HIV following his own diagnosis, working with charities Terrence Higgins Trust and National Aids Trust. 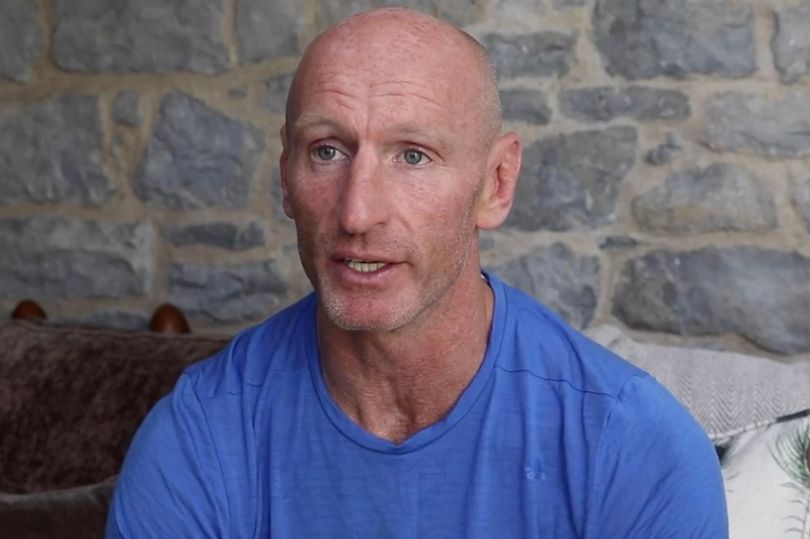 © OK! online Gareth starred in BBC documentary ‘HIV and Me’

“I’m very passionate about children learning about HIV; to be able to protect yourself or to be able to have the knowledge of HIV is a very powerful tool to have.,” he explained.

“And, I’ll be brutally honest, I personally think it would make my life, and the lives of other people with HIV, a lot easier or a lot less complicated.”

Caitlyn Jenner, who won the Olympic Decathlon in 1976, publicly spoke about being a trans woman in 2015. She wrote on Twitter, “I’m so happy after such a long struggle to be living my true self. Welcome to the world Caitlyn. Can’t wait for you to get to know her/me.”

She has spoken openly about her transition and being happier than ever now. “My life is so simple,” she says. “It’s just to be myself all day. I think people think when you transition, it is this tremendous thing, and now you’re a totally different person. I’m still the same person. Caitlyn lived inside me all my life.”

'When I Was A Child My Sister Died, But Nobody Spoke To Me About It'

Turkeys sold out at poultry farms amid food shortage fears

© Provided by Pinkvilla This was the first time Nushrratt Bharuccha was seen as a solo lead with her latest release ‘Chhorii’. The actress says it was daunting and an ... Read more »

Women walk on a dirt road carrying firewood in Qumanco By Katharine Houreld and Ayenat Mersie NAIROBI (Reuters) – South Africa is seeing an increase in COVID-19 reinfections due to ... Read more »

Delhi Jal Board has invited applications to award 30 fellowships: senior fellow, fellow and associate fellow. “The interested candidates may send their online application on email ID: djbact1@gmail.com within 45 ... Read more »

Downing Street has rejected a suggestion from a minister that staff parties should be cancelled or scaled back in the run-up to Christmas. Coming just two days after the Prime ... Read more »

Experts think the Roman skeleton recently found at the port near Herculaneum could have been a naval officer helping to evacuate citizens escaping from the eruption of Vesuvius A Roman ... Read more »

(Disney+) As departures go, the moment that George Harrison decides to leave The Beatles is anything but dramatic. In fact, it’s so prosaic, that you almost find yourself laughing. Halfway ... Read more »

© Provided by Extra.ie RTE pundit Richie Sadlier has said he is ‘recovering really well’ after undergoing spinal fusion surgery. The former footballer was all smiles in a snap he ... Read more »

Here’s how to complete all Jumpman Zone challenges in Fortnite, and the rewards you’ll get for doing so. The leaks were true. The latest collaboration to grace Fortnite is the ... Read more »

Respawn has announced its plans to discontinue new sales of the original Titanfall. The game will also be removed from subscription services as of March 1, 2022. Titanfall first graced ... Read more »

© Provided by Extra.ie Laura Woods has opened up on her decade with Ireland AM months after she left the station nd called hershe labels a career in TV ‘cyclical ... Read more »

© Provided by Dot Esports When you step foot in Shattrath City for the first time you’re faced with one important question: “Aldor or Scryers?” The answer to this question ... Read more »

© Provided by Football FanCast Marvelous Nakamba battling for the ball Despite falling to his first defeat as Aston Villa manager, Steven Gerrard would no doubt have been left impressed ... Read more »

© Provided by Cover Media Bella Hadid In recent years, bold brows à la Lily Collins and Kim Kardashian have been all the rage. However, it seems ’90s-inspired eyebrows are ... Read more »

Holly Willoughby has signed a bumper deal to stay on This Morning for another two years. The 40 year old has been a firm fixture on ITV screens since 2009, ... Read more »

Novak Djokovic has insisted that he will remain fully focused on winning Grand Slam titles and representing Serbia on the international stage next year. The 34-year-old is currently leading his ... Read more »

Fraudsters are posing as children and vulnerable family members to trick parents into handing over thousands of pounds in a new scam. Official figures show almost £50,000 has already been ... Read more »