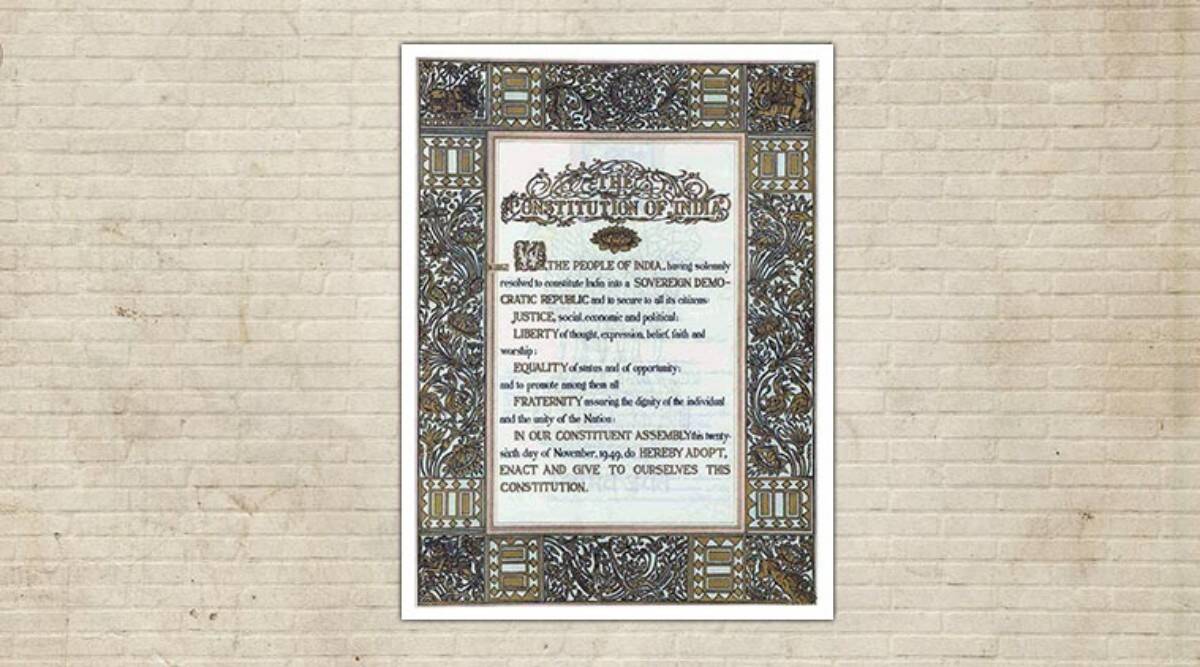 © Provided by The Indian Express

POINTING OUT that Bharat from time immemorial had been a spiritual country, Jammu, Kashmir and Ladakh High Court Chief Justice Pankaj Mithal Sunday said the addition of “socialist” and “secular” to the already mentioned “sovereign, democratic, republic” in the Preamble of the Constitution in 1976 narrowed the vastness of its spiritual image.

Delivering keynote lecture on ‘Dharma and the Constitution of India: The Interplay’ at a function organised here by Adhivakta Parishad of J&K and Ladakh, he said India is capable of taking care of all its citizens and the socialist nature was inherent in it. Pandavas to Mauryas, Guptas, Mughals and Britishers ruled it, but India was never defined on the basis of religion as a Muslim, Christian or Hindu nation, because it was accepted as a spiritual country, he said. “By adding the word ‘secular’, we have narrowed own vastness of spiritual appearance…,’’ he said, adding that “this can be said a narrow-minded approach”. Otherwise, Bharat from time immemorial had been a spiritual country and its name should have been “Spiritual Republic of India”, he added.

Referring to the amendments, he said it is good to have amendments as these prove helpful, but those not in national interest are of no use. “Sometimes, we bring amendments due to our adamancy,” he said. In this context, he referred to two amendments brought into the Constitution in 1976 – one adding Fundamental Duties in Chapter 14 and along with it, adding ‘socialist’ and ‘secular’ to the Preamble. “Very good words, but we have to see whether these amendments were needed, or these have been added at the right place,” he said.

DILG: No such thing as ‘COVID-19 vaccination exemption cards'

Man charged with attempted murder after stabbing incident in Stavanger

If you stop to think about it, painting is a weird activity. Putting coloured pigment mixed with a medium onto a surface either to describe something, or to express feelings, ... Read more »

Chocoholics went nuts for nuts this Christmas and avoided novelty chocolates, according to the boss of Hotel Chocolat Hazelnuts, pistachios, peanut butter and pecan-based chocolates were hugely popular over the ... Read more »

Johnson would ‘normally' be expected to resign if he lied to Commons, says Raab

Mmakau family murder accused due back in court for bail proceedings

© Provided by DW Breivik was sentenced to 21 years in prison for carrying out Norway’s worst peacetime atrocity A Norwegian court on Tuesday was set to consider right-wing extremist ... Read more »

Crypto predictions for 2022 – regulation and 'old school' acceptance is coming

2021 was a year characterised by the adoption of cryptocurrencies by traditional financial institutions Regulation of the crypto space is coming to South Africa – a welcome development if done ... Read more »

IG: Rita Daniela It’s Ken Chan’s special day! His on-screen partner Rita Daniela wrote a touching message for him on Instagram to celebrate his birthday, and shared a series of ... Read more »

Big Ben: What Does it Take to Repair the World's Most Famous Clock?

In the bustling centre of London, in the midst of a busy working Parliament building, atop the 96m-high Elizabeth Tower, up 11 floors (and 334 steps), is the Great Clock. ... Read more »

The BBC’s director-general has said the licence fee freeze will result in a £285 million gap in funding for the corporation and will “no doubt” affect the broadcaster’s “frontline output”. ... Read more »

How the Queen's Platinum Jubilee is being celebrated

The real reason for China's trade war on Lithuania

The Associated PressNorwegian mass killer Anders Behring Breivik arrives in court on the first day of a hearing where he is seeking parole, in Skien, Norway, Tuesday, Jan. 18, 2022. ... Read more »

RIYADH, Saudi Arabia — South Korea’s leader arrived in Saudi Arabia on Tuesday, where he was greeted in Riyadh by the kingdom’s crown prince and an honor guard marching band. ... Read more »

Cardi B considering getting face tattoo of son's name

© Provided by Cover Media Cardi B Cardi B is considering getting a tattoo of her son’s name on her face. The 29-year-old rapper and her husband, Offset, welcomed their ... Read more »

Adama Traore and Wolves parting ways this month is best for everyone, says journalist Pete O’Rourke. The 25-year-old is being heavily linked with a move away from Molineux, with Tottenham thought ... Read more »

© AFPTV/AFP via Getty Images Djokovic LIVE – Updated at 09:13 The Australian Open continues without Novak Djokovic after the saga over the men’s defending champion’s visa was finally brought ... Read more »

Former Manchester United defender Rio Ferdinand has tipped Chelsea to win the League Cup this season. Thomas Tuchel’s side were the first to book themselves a place in the Carabao ... Read more »

What the papers say Scotland and Aston Villa midfielder John McGinn is of major interest to Manchester United The Telegraph reports that 27-year-old McGinn is “admired” by compatriot Darren Fletcher ... Read more »

© Provided by Daily Mail MailOnline logo The January window is now open for business in the Premier League and around Europe, with clubs looking to add to their squads ... Read more »

Police at the location where the child’s body was found. Photo: Marco de Swart ANP Police in Zeeland have found the body of four year-old Dean Verberckmoes who was reported ... Read more »

© Provided by Football League World Championship – Blackpool v Queens Park Rangers Nottingham Forest are not giving up on their pursuit of Josh Bowler at Blackpool as the Reds ... Read more »

Tennis Australia have released a statement underlining their “deep regret” over the explosive Novak Djokovic saga which dominated the build-up to the Australian Open. Despite Djokovic not being vaccinated against ... Read more »

Some patients go in for COVID-19, others are infected alongside another issue. In hospitals, those lines blur

30,000 shipments of nuclear waste would move through Ontario cities, farmland under draft plan

© NWMO Canada’s nuclear industry plans to send up to 30,000 shipments of toxic radioactive waste by truck or rail to either Ignace or South Bruce in Ontario. Some of ... Read more »

Images reveal devastation inflicted on Tonga by volcano and tsunami

Parcels from overseas may have spread Omicron – Chinese state media