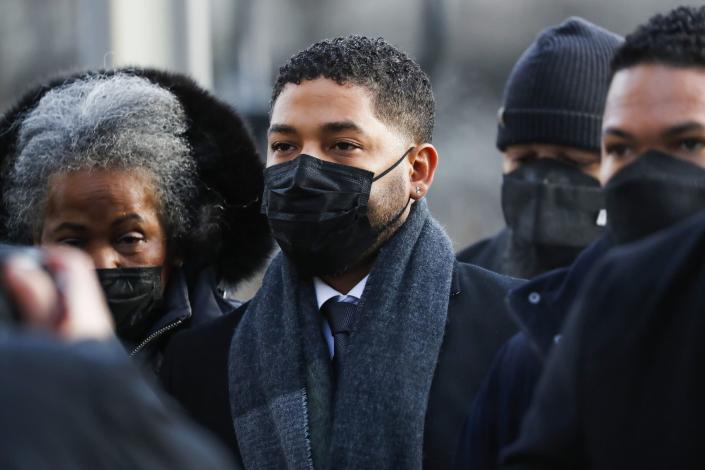 Closing arguments began in the trial of Jussie Smollett Wednesday, with a special prosecutor on the case saying the former “Empire” actor not only committed a crime by falsely reporting a hate crime, what he did was “just plain wrong.”

Prosecutor Dan Webb began his remarks by telling jurors the allegations against Smollett were relatively simple: He falsely reported a fake hate crime to the Chicago Police Department as a real hate crime.

“We have proven this by overwhelming evidence,” Webb said.

Not only is what Smollett did a crime, Webb said, “beyond that it’s just plain wrong to just outright denigrate” something as serious as a hate crime. Webb said it was particularly egregious for Smollett to make sure his plan “had words and symbols” emblematic of this country’s racist past — including a noose and the use of the N-word.

The arguments started just before 9:30 a.m., capping off a seven-day trial that has captured nationwide attention.

The jury is expected to begin deliberating as soon as Wednesday afternoon.

Prosecutors contend Smollett staged a phony hate crime attack on himself with the help of two brothers, directing one of them to pull his punches and the other to put a noose around his neck and pour bleach on him.

Smollett’s defense is adamant that the attack was real, and Smollett never orchestrated any kind of hoax — an assertion that Smollett stuck to for hours during his own time on the witness stand this week.

Smollett faces six counts of disorderly conduct for allegedly giving false information to the police about the attack.

The alleged racial and homophobic attack on the then-“Empire” actor on a frigid night in January 2019 led to one of the most momentous minor felony cases in Cook County history.

Under an international media spotlight, the case spiraled into a tangle of rumors and culture-war flashpoints, competing lawsuits, a special prosecutor’s investigation, and a political crisis for Cook County State’s Attorney Kim Foxx.

But jurors will be tasked with determining only one thing: Whether Smollett, in fact, staged the attack on himself, then lied to police about it.

US to sanction pro-Russia separatists in Ukraine as Blinken visits: report

Neon can reach higher areas in VALORANT with sprint ability

Where to Find Klombos in Fortnite

How to change the Mate in Yu-Gi-Oh! Master Duel

New York is set to reach new highs starting in 2023 — thanks to legalized pot. The state plans to reap more than $1.25 billion in new revenue from legal ... Read more »

Alabama, one of college basketball’s high-flying teams in early December, is looking to rebound following three straight close losses. The Crimson Tide (11-6, 2-3 Southeastern Conference) fell out of the ... Read more »

Our friends at Road & Track have a ton of new events coming up, and they (and we) want you to join in. Among them is their first one-day rally ... Read more »

The 2021 Africa Cup of Nations has well and truly burst into life in recent days. After a slightly dull start to the tournament out in Cameroon, the goals are ... Read more »

© AFP via Getty Images comoros.jpg Ghana finished bottom of Group C as they crashed out of the Africa Cup of Nations with a shock 3-2 defeat to Comoros despite ... Read more »

PRINCE RUPERT, B.C. — Port officials in Prince Rupert, B.C., say 2021 was a difficult year as cargo volumes fell, but they are optimistic about a strong recovery. © Provided ... Read more »

A PREHISTORIC fertility symbol looking like curvy Kim Kardashian has sold for a fabulous figure. Experts say the 25,000-year-old stone carving has an exaggerated bust and bottom to depict a ... Read more »

LIVE – Updated at 21:17 A manhunt is underway for a suspect accused of stabbing 24-year-old Brianna Kupfer to death at the furniture store where she worked in Los Angeles. ... Read more »

Queen launching a royal brown sauce to rival HP for £6.99 a bottle

THE monarchy is to battle again with the Houses of Parliament — launching a brown sauce to rival HP. A royal ketchup is also splattering on the market — but ... Read more »

AT&T and Verizon will delay launching new wireless service near key airports after the nation’s largest airlines said the service would interfere with aircraft technology and cause massive flight disruptions. ... Read more »

'Harry Potter' actor Rupert Grint says J.K. Rowling is still his 'auntie' even though he doesn't agree with her views

Jon Moxley will be back with AEW Wednesday night. The wrestling promotion announced that Moxley, who wrestled in WWE as Dean Ambrose, will appear on “AEW Dynamite” on TBS Wednesday. ... Read more »

Rebel Wilson has revealed that she chose the comedy acting route after her PCOS (Polycystic Ovary Syndrome) caused dramatic weight gain before she hit her twenties. The newly-svelte star also ... Read more »

Jennifer Hudson is serving major cheerleader energy in a new Instagram video—and her abs are totally sculpted! The 40-year-old singer and actress showed off her best moves while wearing a ... Read more »

When does the Kingdom Hearts series come out?

NINTENDO Switch users are counting down the days until the Kingdom Hearts series launches and is available for download. The series is set to include Kingdom Hearts HD 1.5 + ... Read more »

Emmerdale’s Billy Fletcher faced the wrath of his fiancée Dawn Taylor as he appeared to compare her to serial killer Meena Jutla. The village resident left his wife-to-be questioning her ... Read more »

A pedestrian was left with possible life-changing injuries after being struck by an e-Scooter on a busy high street in east London. The woman was hit in Kingsland Road at ... Read more »

At this point, roughly speaking, about one US state a year decides to end the penalty. So which state is mostly likely to be next in 2022? The answer might ... Read more »

Trans activists will not be charged for sharing J.K. Rowling's address on Twitter

How baseball's analytics movement affects the 2022 Hall of Fame vote

The 2022 Baseball Hall of Fame writers’ ballot might very well be the most fascinating and polarizing such referendum in the museum’s history. This week, ahead of the results being ... Read more »

Do you know flags better than Simon Cowell? Take our test to find out

FOR flag’s sake, Simon! We revealed yesterday how Simon Cowell failed to recognise the English flag at Britain’s Got Talent auditions – and was rightly mocked by fellow judge David ... Read more »

Australia, the Bahamas and 20 other countries are now on the CDC's 'avoid travel' list