The rescheduled Indian Premier League is due to get underway later this month, with a total of 31 games left to play.

The tournament initially began back in April, with Virat Kohli’s Royal Challengers Bangalore beating the reigning champions Mumbai Indians by two wickets in the opening game.

However, with the coronavirus crisis worsening in India and a rise of cases within team bubbles, the IPL was postponed in May.

It has been rescheduled to take place in the United Arab Emirates, with the remaining games getting played across September and October.

Here is everything you need to know about the IPL. 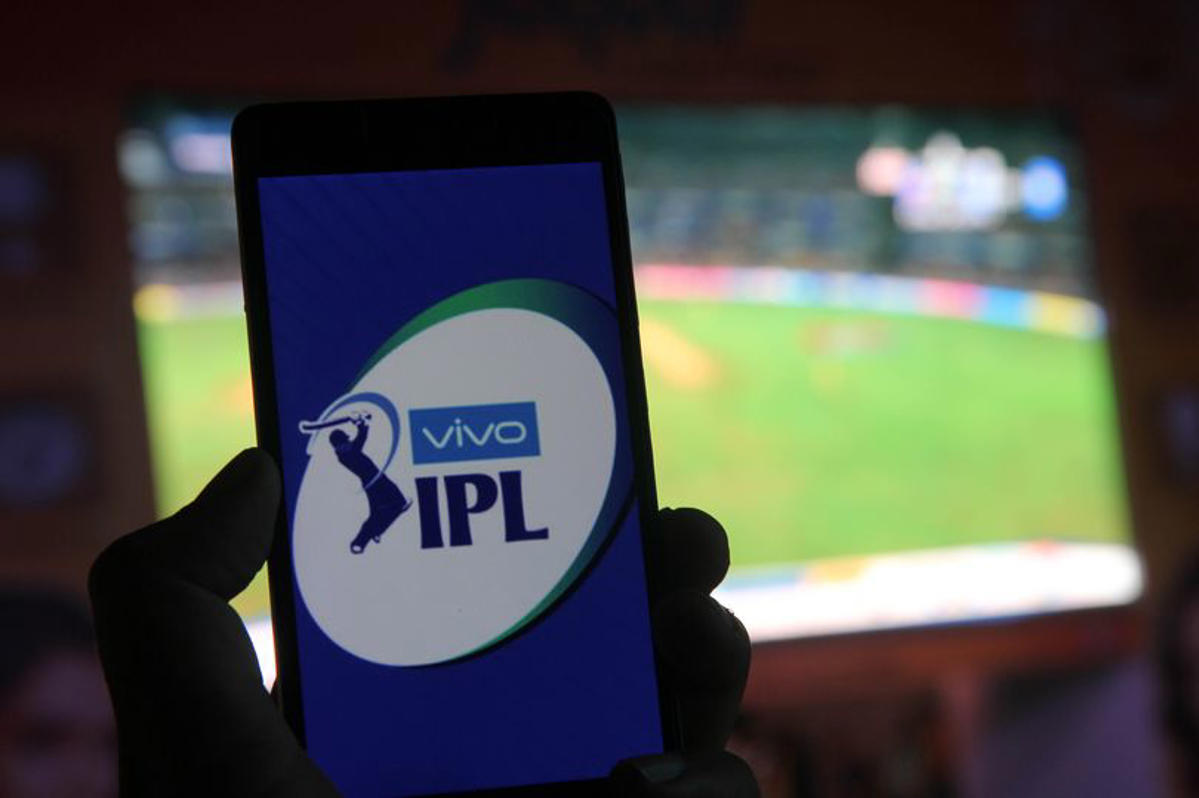 © Nasir Kachroo/NurPhoto via Getty Images The 2021 edition of the Indian Premier League will resume on September 19 in the United Arab Emirates, having been postponed back in May due to rising coronavirus cases

What is the state of play?

Currently, the Delhi Capitals are top of the table with 12 points, having won six of their eight games so far.

Just behind them with ten points are the Chennai Super Kings and Royal Challengers Bangalore, who have both played seven games.

They are followed by the defending champions Mumbai Indians, who have eight points, and Rajasthan Royals, who are on six.

Punjab Kings also have six points but, along with Delhi Capitals, they have played eight games.

The final two teams are Kolkata Knight Riders and Sunrisers Hyderabad, who desperately need to find some form.

Delhi Capitals opener Shikhar Dhawan is currently the tournament’s leading run scorer, having hit 380 runs at an average of 54.28 and a strike-rate of 134.27.

The only other batters to pass the 300-run mark are KL Rahul, Faf du Plessis and Prithvi Shaw.

The current leading wicket-taker is Royal Challengers Bangalore’s Harshal Patel, who has picked up 17 at an average of 15.11.

With the tournament now moved to the UAE, the remaining games will be played across three grounds in Dubai, Sharjah and Abu Dhabi – the same grounds that the 2020 edition of the IPL were staged in.

Supporters will also be able to attend these games in limited numbers, with the tournament resuming on September 19 with Chennai Super Kings vs Mumbai Indians.

The group stages will end on October 8, with the first qualifier scheduled for October 10.

A number of players who featured in the first leg of the IPL have pulled out of the remainder of the tournament due to a variety of different reasons.

Some players have suffered injuries, while others have cited bubble fatigue and the packed cricket schedule as reasons for their withdrawal.

Archer has been ruled out for the rest of the year with an elbow problem, Stokes is on an indefinite break from cricket and Buttler has opted to spend more time with his family after his wife recently gave birth to their second child.

Jonny Bairstow, Chris Woakes and Dawid Malan have also withdrawn, with all three choosing to take a break ahead of a busy winter schedule which involves the T20 World Cup and the Ashes.

Sunrisers Hyderabad have replaced Bairstow with West Indies batter Sherfane Rutherford, Ben Dwarshius has been drafted in as Delhi Capitals’ replacement for Woakes and Punjab Kings have replaced Malan with Aiden Markram.

Who will win this year’s IPL? Let us know in the comments section

Kolkata Knight Riders have also suffered a big name loss, with Pat Cummins opting out of the tournament and getting replaced by Tim Southee.

Uncapped England prospect George Garton has also been drafted in as one of five replacement players at Royal Challengers Bangalore.

Which England stars are there?

Despite the six withdrawals, there are ten English players who will be involved at the IPL, with Rashid and Garton brought in as replacements.

Rashid joins Chris Jordan at Punjab Kings, while the withdrawal of Archer, Stokes and Buttler means Liam Livingstone is now the only England star at Rajasthan Royals.

Sam Curran and Moeen Ali have both been very important to the Chennai Super Kings side and they will be in action.

England’s white ball captain Eoin Morgan will be in charge of Kolkata Knight Riders, having taken over from Dinesh Karthik midway through the tournament.

Jason Roy is also in contention for Sunrisers Hyderabad, having been drafted in as a replacement for Mitchell Marsh who pulled out before the tournament began.

How can I watch the IPL?

Sky Sports will be airing every game live predominantly on their dedicated Sky Sports Cricket channel.

You can also stream games live via the Sky Go app if you are a Sky Sports subscriber.

If not, you can purchase a Sky Sports streaming pass through Now TV.

What are the full squads?

Soccer-Tuchel loses Lukaku and Werner to injury against Malmo

Florida reported 2,571 COVID-19 cases and no new deaths on Tuesday, according to Wednesday’s report to the Centers for Disease Control and Prevention, based on Miami Herald calculations of CDC ... Read more »

No need for Plan B yet, as UK COVID cases and hospitalisations rise

1 / 5No need for Plan B yet, as UK COVID cases and hospitalisations riseShoppers walk past a mural denoting appreciation for the UK National Health Service, amidst the spread ... Read more »

South Carolina reported fewer than 1,000 COVID-19 cases for the second straight day after reporting its lowest daily total in months just a day earlier, according to the state Department ... Read more »

Mark Few has pleaded guilty to driving under the influence in a Coeur d’Alene, Idaho court. © Provided by Yahoo! Sports Mark Few was cited for DUI in September. (Photo ... Read more »

The Warriors have announced another member of their 2021 squad will not be with the team in 2022, with promising young prop Jamayne Taunoa-Brown released to explore a different opportunity. ... Read more »

Canadiens not yet making changes despite winless start

Making kids wear masks in school is torture, not safety

There is no need to continue to make children wear masks in schools. Matthew McDermott How long will we continue to torture kids? And let’s be clear: Forcing them to ... Read more »

Professionalism of Rugby has led to greater risk of brain injury

Matchroom has officially confirmed that, as revealed this morning, next week’s heavyweight clash between Dillian Whyte and Otto Wallin is off after the former suffered a shoulder injury in training ... Read more »

Nikolas Cruz pleaded guilty to all 34 charges in the 2018 Parkland massacre. He apologized for killing 17 people, saying he must live with it 'every day.'

A mourner sits by a cross adorned with pictures of victims, along with flowers and other mementoes, at a memorial two days after the shooting at Marjory Stoneman Douglas High ... Read more »

Ole Gunnar Solskjær brushed off the half-time boos as Manchester United came from 2-0 behind to beat Atalanta thanks to Cristiano Ronaldo’s late winner. Jeers were clearly heard around the ... Read more »

The head of Scottish Power has said Britain’s gas crisis will keep driving energy bills higher until 2023, and could leave only five or six of the strongest suppliers standing. ... Read more »

Members of the National party and farming groups have been claiming for months that landholders have done all the “heavy lifting” on cuts to climate pollution in Australia. © Provided ... Read more »

A New York subway passenger was aggressively pushed out of a subway station after asking a police officer put on a mask. © Twitter pjimage (5).jpg The unmasked officer was ... Read more »

Government taskforce to tackle sharp rise in scams during pandemic

A government taskforce is to meet on Thursday to discuss ways to tackle the sharp rise in scams that has hit the UK since the start of the pandemic. © ... Read more »

The parents and family members of the Parkland school shooting say they want to see Nikolas Cruz be put to death for the 2018 massacre. Read more »

Nikolas Cruz’s brother has said he is “pleased” with his sibling’s guilty plea on all charges for the 2018 Parkland school shooting, while a survivor of the massacre renewed calls ... Read more »

Burberry has revealed it has poached the boss of Versace to succeed Marco Gobbetti as chief executive. The luxury brand's shares plunged by 10% when Gobbetti – credited with turning ... Read more »

Middlesbrough claimed a second home victory inside five days with a 2-0 win over struggling Barnsley at the Riverside Stadium. Despite an encouraging start from the Tykes it was Boro ... Read more »

Andy Haines out as Brewers' hitting coach after NLDS loss

Warnings of ‘debt crisis' as millions fall into arrears during pandemic

3.8m low-income households estimated to be in arrears with household bills

P.J. Tucker upset Bucks did not re-sign him after championship run

James Harden on contract situation: “I don't plan on leaving” the Nets