In August 2021, inflation in the UK saw its largest month-to-month increase on record, according to the Office for National Statistics (ONS). On top of tax hikes and benefit cuts, the British public also have to deal with the Consumer Prices Index (CPI) rising from two percent in July to 3.2 percent in August. Growing inflation rates are also being exacerbated by businesses facing struggles with worker and supply shortages resulting from Brexit.

With a first-look exclusive access for Express.co.uk, YouGov is sharing the results of their most recent survey which outline the costs Britons have noticed rising since the pandemic started.

As one of the country’s most trusted pollsters, YouGov polled hundreds of Britons across the nation between September 3 to September 5 to ask one question.

YouGov asked: “Have you noticed an increase or decrease in the price of the following products or services compared with before the pandemic (i.e. before March 2020)? 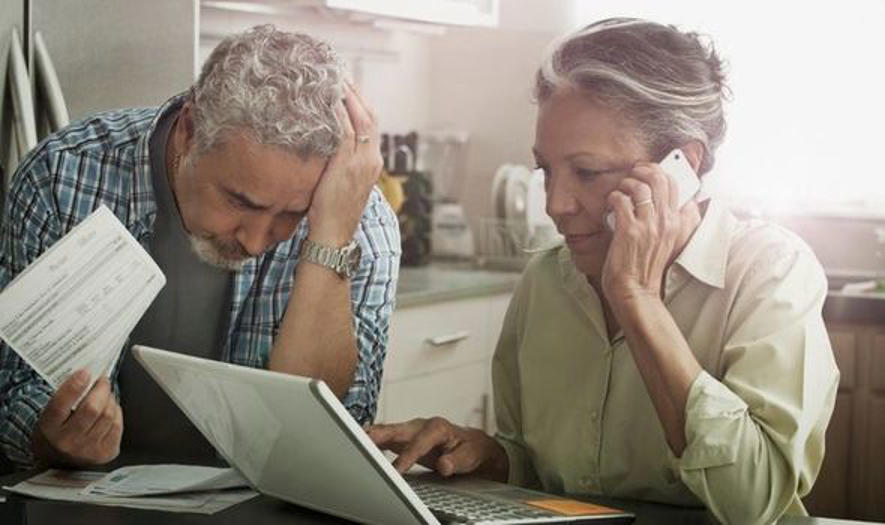 Among the products and services highlighted by YouGov were fuel, household bills, groceries, having a meal out, having an alcoholic beverage out, getting haircut or beauty treatment, clothes, hobbies, public transport and shop-bought alcohol.”

Respondents were asked if the changes were either a major, moderate or minor increase compared to pre-Covid times.

According to the survey, recent price hikes are starting to have an effect as fuel topped the list of rising expenses.

Some 77 percent of people surveyed said they have noticed it becoming more expensive since the start of the pandemic.

This included 31 percent of drivers in the UK, who reported a “major increase” to their bills from before.

According to Citizens Advice, Britons are encouraged to reach out to their energy provider to negotiate their repayment plan.

If this falls through, people may be able to repay their debt to the supplier directly from their benefits, if they are receiving support from the DWP, through the Fuel Direct Scheme.

This is widely considered to be the most effective way of paying off any unpaid energy bills as it does not risk electricity or gas running out.

However, those who are eligible must be receiving certain qualifying benefits, including: Income-Based Jobseeker’s Allowance, Income Support, income-related Employment and Support Allowance, Pension Credit andUniversal Credit, if they are unemployed. 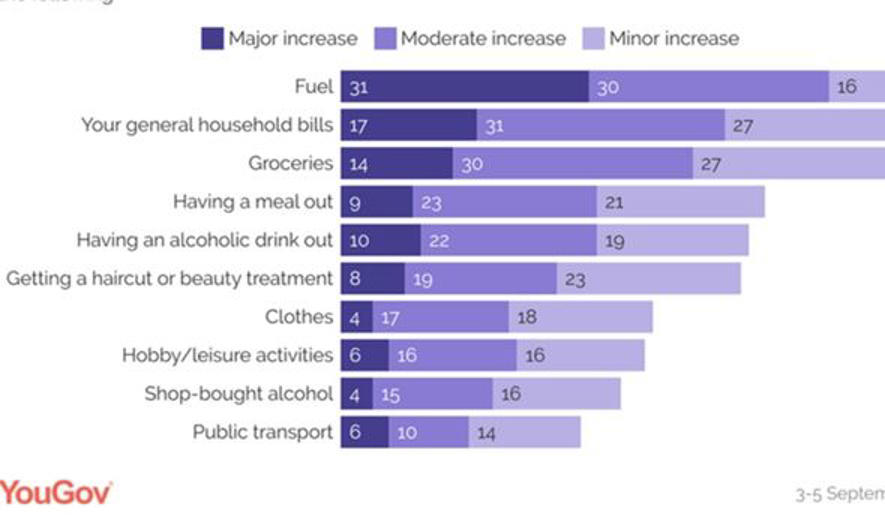 Furthermore, three in four of those surveyed (75 percent) revealed they have seen their household bills rise even further, with 17 percent noticing a massive rise.

This will be a worrying development as energy bills are set to increase even further from October 1 following the growing crisis over fossil fuels.

People also noted that everyday groceries, such as bread and milk, had become increasingly expensive over the last 18 months.

Around seven in ten people (72 percent) shared they had noticed prices rise or product sizes shrink over the course of the pandemic.

In a further breakdown of this, one in seven people (14 percent) said there has been a major increase, while three in ten (30 percent) regard it as moderate, and a quarter (27%) as minor’.

Recently, the ONS reported that the price of food and drink in shops and supermarkets rose by 1.1 percent in the month of August, which is the highest rate of growth since 2008.

This growing rise in the price of food and drink was noticed by Britons who tend to eat out regularly in restaurants, cafes and bars.

Around half of people who normally eat (53 percent) and drink (51 percent) out shared they had realised prices in restaurants and pubs had risen since March 2020.

In regards to the bottom of YouGov’s expenses poll, people were least likely to notice an increase in the cost of public transport.

Only three in ten regular users of public transport have picked up on their fares going up in the last year and a half.

However, among Londoners who are the most reliant on buses and trains, this figure rises sharply to 44 percent as they are more likely to rely on public transport on a regular basis.

Sara Duterte: 11 in household, including children, got COVID-19

How to use your phone to stay happy and healthy: New review says doctors recommend medical apps far less often to older patients

© NBC After 20 seasons on The Voice, is Blake Shelton turning into a softie? Monday marked the start of the season 21 Knockouts, and Blake was faced with an ... Read more »

© Image Press Agency Chris Harrison was ousted from The Bachelor and its spinoffs in early June after initially stepping aside from the popular ABC franchise in March. It objectively ... Read more »

McAuliffe in 2019: 'Diversity, inclusion' are 'as important as' math and English in schools

Virginia Democratic gubernatorial candidate Terry McAuliffe’s remarks about “diversity” and “inclusion” in schools, which he made in 2019, have resurfaced in the pivotal lead-up to Election Day on Nov. 2.  ... Read more »

Pence appearance in Virginia not tied to Youngkin, campaign insists

The main opposition coalition, Forces of Freedom and Change, has called for peaceful action in the streets to overthrow the military takeover. Read more »

Oct. 25—GROTON — A New London man was charged with allegedly hurling homophobic slurs at another man and choking him until he was unconscious outside a grocery store earlier this ... Read more »

Law enforcement officers who risk losing their jobs for not wanting to get vaccinated against Covid-19 or make their vaccination statuses known could get $5,000 bonuses to work in Florida. ... Read more »

Seemingly unconcerned with social etiquette during a pandemic, President Joe Biden appeared to cough or clear his throat, with his hand raised to his mouth, before shaking hands with audience ... Read more »

Advertiser Disclosure: At Slickdeals, we work hard to find the best deals. Some products in our articles are from partners who may provide us with compensation, but this doesn’t change ... Read more »

50 of The Best Halloween Movies to Watch This Halloween

COVID live updates: Cases dropping across US, rising in parts of Midwest, Northeast

As the COVID-19 pandemic has swept the globe, more than 4.9 million people have died from the disease worldwide, including over 736,000 Americans, according to real-time data compiled by Johns ... Read more »

Ahead of the Assembly elections in Uttar Pradesh, Aam Aadmi Party (AAP) national convenor and Delhi Chief Minister Arvind Kejriwal on Monday performed ‘aarti’ on the banks of the Saryu ... Read more »

© Provided by The Times of India NEW DELHI: It is not the business of any bar association to interfere and pressure a chief justice to change roster of a ... Read more »

Cop26 in 26 images: Stunning photographs capture the beauty up for discussion at the climate crisis conference – from piglet on an industrial farm to lemon shark pup swimming off threatened Bahaman isles

Video: 'This is Breast Cancer Awareness Month done well': The Simpsons win praise from fans after introducing a breast cancer survivor character who practices hypnotherapy and has a 'uniboob' following a mastectomy

Kat Von D is closing her Los Angeles tattoo parlor High Voltage after 14 years. The tattoo artist, 39, took to Instagram Monday to detail the end of an era ... Read more »

Mexico on Monday began Covid-19 vaccinations for adolescents with chronic diseases in the capital, the latest step in an immunization drive in one of the countries hit hardest by the ... Read more »

'This is Breast Cancer Awareness Month done well': The Simpsons win praise from fans after introducing a breast cancer survivor character who practices hypnotherapy and has a 'uniboob' following a mastectomy

Dr. Wendy Sage made her debut on the Fox animated comedy on Sunday night's episode of the hit show, which aired during Breast Cancer awareness month The character was created and voiced by actress, writer, and breast cancer survivor Renee Ridgeley, who is the wife of Simpsons showrunner Matt Selman Sage opted to forgo surgical reconstruction after her unilateral mastectomy and has one breast, which survivors refer to as 'uniboob'She also has a visible scar from her from where she had her port-o-cath, a device placed under the skin to deliver chemotherapy Fans were thrilled to see the inclusion and representation of breast cancer survivors in the poignant episode about body acceptance   Read more »

Google Pixel 6 review: Yes, it lives up to the hype

There is a lot of hype around the Google Pixel 6, which has new cameras, Google’s Tensor chip and more premium ambitions. Some of that hype is from Google announcing ... Read more »

The teenager accused of sexually assaulting a ninth-grade girl in a Loudoun County, Virginia, high school was found guilty on all charges. The victim was assaulted in a women’s restroom ... Read more »

Oct. 25—WATERFORD — More than three years after her 5-year-old autistic son died in the backseat of a hot car, a local mother has been given a fully suspended eight-year ... Read more »

Oct. 25—TRAVERSE CITY — A 66-year-old Traverse City man was killed in a three-car crash at the corner of Lafranier and Hammond roads, officials said, and the driver of one ... Read more »

Iran believed to be responsible for attack on U.S. base in Syria

Iran is believed by the U.S. to be responsible for last week’s attack on al-Tanf, a base in southern Syria where U.S. troops are located, according to a U.S. official. ... Read more »

The Biggest Bounce, the world's biggest jumping castle - is returning to AustraliaBig Bounce Australia is set to launch the event around the country over summerThe  1,500 square metre jumping castle has been certified as the world's largest Read more »

What's the most super way to fight off the super cold?

© Provided by Daily Mail MailOnline logo Experts warn that the UK faces an uncertain winter, with Covid and flu circulating.  After lockdowns and mask-wearing, which cut infection rates, we ... Read more »

© Provided by CinemaBlend Robert Pattinson as The Batman If there’s one sure thing when it comes to comic book movies, it’s Batman. He’s the one character that DC seems ... Read more »

© Frazer Harrison/Getty Images The Jonas Brothers are gearing up to get roasted. The trio are set to star in a new comedy variety special for Netflix, Jonas Brothers Family ... Read more »

This Morning bosses are reportedly keen on Alison Hammond and Dermot O’Leary taking over the reins on the hit ITV breakfast show. The duo have been presenting the Friday edition ... Read more »

© Wavebreakmedia/Getty What to know about investment banking and the professionals driving the biggest deals on Wall Street Investment banking is a specific kind of banking that helps companies, governments, ... Read more »

Explained: Queen Heo Hwang-ok of Korea, and her Ayodhya connection

© Provided by The Indian Express On the banks of the Sarayu in Ayodhya, acres of green space, mostly known as Ram Katha Park, have been through a major beautification ... Read more »

Disha Ravi toolkit case: With probe making no headway, closure report may be an option

© Provided by The Indian Express The probe into the case against climate activist Disha Ravi, who was arrested February by Delhi Police in connection with a toolkit on the ... Read more »

Historic net zero emissions target is announced - and it will create 62,000 regional jobs and leave Aussies $2,000 better off

Video: Dominic Perrottet pleads with Tasmanian premier to allow a Sydney woman to see her dying mother who has just 48 hours to live

Glasgow's rat problem is Margaret Thatcher's fault, claims 'delusional' SNP council leader (despite the Tory leader leaving office in 1990 and having been in the job herself for four years)

Will Nadia Bartel return to the races? All the signs the ex-AFL WAG will make her big comeback at the Melbourne Cup carnival... after laying low for weeks following her infamous white-powder scandal

‘This is NOT normal': Facebook employees vent their anguish

OPINION: The next four-letter word taking the world of finance by storm

Airtel to opt for 4-yr moratorium on dues

Aussie NBA star Ben Simmons lists his HUGE five bedroom $6.7m mansion in New Jersey - but is mocked for his gaudy 'Simmo The Savage' neon light in his gaming room

We owe it to our patients to agree that no Covid jab means no NHS job, writes Dr MAX PEMBERTON