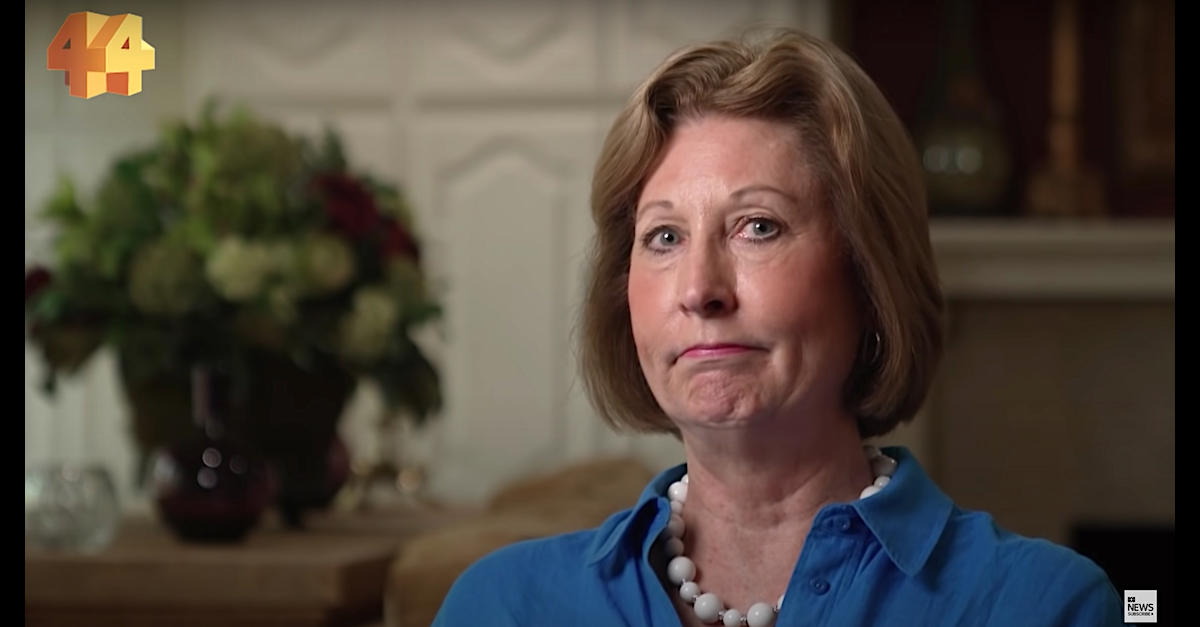 © Provided by Law & Crime Sidney Powell appears in an August 2021 interview with the Australian Broadcasting Corporation.

Sidney Powell appears in an August 2021 interview with the Australian Broadcasting Corporation.

Embattled former Trump campaign attorney Sidney Powell on Friday filed a counterclaim against Dominion Voting Systems.  In it, she argues that the voting machine hardware and software company currently suing her for more than $1 billion is simply trying to silence its critics.

Powell’s counterclaim alleges but one count:  abuse of process against Dominion.

Powell, a former federal prosecutor, is one of several so-called “Kraken” attorneys who for months claimed that the 2020 presidential election was stolen from Donald Trump by the Democrats. The plethora of post-election lawsuits filed by Powell and her associates failed miserably. Earlier this month, U.S. District Judge Linda Parker ordered Powell and her cohorts to repay the State of Michigan more than $200,000 in sanctions. Parker also referred Powell and nine other attorneys associated with the litigation to various bar associations for “possible suspension or disbarment.” Powell and others on the “Kraken” team countered that they should pay no more than $44,000 to reimburse the state and the City of Detroit as a consequence of the failed litigation in the Wolverine State.

Dominion Voting Systems sued the right-wing attorney earlier this year to recover more than $1.3 billion in alleged damages over what it called “wild” and “demonstrably false” allegations against the company that Powell made through “conspiracy theorists, con artists, armchair ‘experts,’ and anonymous sources.”

Per the complaint filed by Dominion in January, after the company sent Powell a letter requesting that she cease making false claims about the company “stealing” the election, Powell doubled down on her claims by saying she had evidence to back them up.

That evidence never surfaced to the satisfaction of judges in various states nationwide, but Powell on Friday refused to concede. Rather, she again promulgated theories of widespread voter fraud in the 2020 election by filing a countersuit against Dominion. The counterclaim argues that the company’s post-election lawsuits against Powell and her associates were filed to obtain “the ludicrous amount of over $1 billion in damages” while also “tarnishing Ms. Powell’s reputation with allegations that would be defamatory if not protected by the litigation privilege.”

“Dominion’s own patents and instruction manuals expressly provide for remote access to real-time election results; remote access to adjudicate votes or to flip votes; deletion of audit logs and votes; and other vulnerabilities. All of these vulnerabilities were present in Dominion voting equipment and software in the 2020 Presidential election,” Powell wrote in the countersuit. “To avoid having these underlying facts surface in public, Dominion developed this litigation and the related cases as a public-relations campaign to change the narrative, to hide the truth, and to discourage future challenges and negative reporting.”

Powell’s latest claims about Dominion appear to contradict her initial response to the company’s defamation lawsuit against her. Powell’s attorneys in March filed court documents seeking to dismiss the suit by claiming that “no reasonable person” would believe that her well-publicized comments about an international plot against former President Donald Trump were “statements of fact.”

“Given the highly charged and political context of the statements, it is clear that Powell was describing the facts on which she based the lawsuits she filed in support of President Trump,” her attorneys wrote in a 54-page motion to dismiss.

“They are repeatedly labelled ‘inherently improbable’ and even ‘impossible,’” the motion to dismiss continued — all in direct reference to the conspiracy theories peddled by Powell, her law firm, and her non-profit group Defending the Republic. “Such characterizations of the allegedly defamatory statements further support defendants’ position that reasonable people would not accept such statements as fact but view them only as claims that await testing by the courts through the adversary process.”

Powell is seeking a declarative judgement of “not less than $10 million” in addition to punitive damages.

A spokesperson for Dominion did not immediately respond to a Law&Crime request for reaction or comment on the counterclaim.  If a response is received, we will update this report.

Read the full countersuit below.

[image via the Australian Broadcasting Corporation/YouTube]

David Onyemata set to return to Saints from suspension

BCB After Dark: What's on second?

The Crown to include ‘keystone moment' of Diana's Bashir interview, reports say

Carli Lloyd retirement: Why was she subbed out by Alex Morgan in final USWNT match?

Carli Lloyd played her 316th and final match for the U.S. women’s national soccer team on Tuesday. Emotions flowed at Allianz Field in Minnesota, although she couldn’t find one final ... Read more »

Speculating on the rumors surrounding pro wrestling is a favored pastime of many fans, perhaps second only to actually watching the matches. In this daily column, we take a look ... Read more »

By David Randall © Reuters/Gary Cameron FILE PHOTO: U.S. dollar bills NEW YORK (Reuters) – Phil Orlando has not heard this many people mentioning stagflation since he was a financial ... Read more »

© Provided by City AM Retail bosses have warned once more that consumers will feel the pinch of price rises in the run up to Christmas. Consumer prices have been ... Read more »

Pubs, restaurants, hotels and nightclubs face a £8bn “cliff edge” within a few months, Rishi Sunak has been warned ahead of Wednesday’s Budget and spending review which is due to ... Read more »

The Denver Nuggets and the Utah Jazz gave us one of the first altercations of the new NBA season on Tuesday, and TNT announcer Kevin Harlan definitely did not disappoint ... Read more »

© Motivate Publishing rain-Dubai-6-740×456 The weather in the UAE will remain cloudy in select parts of the country on Wednesday, with another decrease in temperatures expected. “Fair to partly cloudy, ... Read more »

The Debt Panel: 'Can I ask my bank to waive the interest on a personal loan?

© Provided by The National The National I need your support and guidance to help me settle a Dh450,000 personal loan I took out three years ago. The term of ... Read more »

Disgruntled neighbor who killed 9 by arson gets life sentence

A balloon memorial sits outside the burnt home of a family that died in a fire in Akron, Ohio. Stanley Ford, convicted of killing nine people in arson fires in ... Read more »

‘You could lose your ENTIRE inheritance'! Online will writers cost families their fortunes

Legal experts are warning of a sharp rise in disputed legacies as more people prepare cheap online wills rather than paying to use a solicitor. Thousands of families could be ... Read more »

Shoppers have been warned to brace themselves for higher prices in the run-up to Christmas. It comes as a study shows the surge in energy prices risks leaving two in ... Read more »

Several firms conducted research among their customer bases to discover what the nation’s priorities are ahead of the Government’s spending review and autumn Budget, both set to be unveiled in ... Read more »

Paying for boiler cover? Here's why you shouldn't bother

Boiler insurance is three times more expensive than the average cost of repairs, leaving those who pay for cover hundreds of pounds out of pocket each year.  © David J. ... Read more »

More than 1.3 million people will pay a high price for being their own bosses as their failure to build up their retirement savings could force them to carry on ... Read more »

© Other The chancellor said he wants to see an economy of ‘higher wages, higher skills, and rising productivity’. Pics: HM Treasury/Flickr Rishi Sunak has claimed his budget will deliver ... Read more »

We have come to understand that the climate crisis is everyone’s problem. Around the country, people are taking the message seriously – not just at home, but in their local community, too.   From ... Read more »

TfL gets tough on sexual harassment with launch of new crackdown

© Jonathan Brady/PA tfl0105.jpg Sexual harassment will not be tolerated on public transport or anywhere in London – that is the message from TfL as it launches a new campaign ... Read more »

Popular pundit and former Crystal Palace owner Simon Jordan has confessed how flabbergasted he is by the enormity of spending at Everton under Farhad Moshiri. © Michael Regan/Getty Images Sport ... Read more »

© Namewee via YouTube Controversial Malaysian singer-songwriter Namewee, who has been accused of insulting China and Chinese people with his recent viral hit ballad “Fragile,” and advocating independence for Hong ... Read more »

Australia pledges net-zero emissions by 2050 without taxes or mandates

Australia has pledged to reach net-zero carbon emissions by midcentury without major new legislation restricting fossil fuels, a commitment that brings the country into alignment with its rich peers ahead ... Read more »

Smoke comes out of an electric plant on the shore of the polluted River Plate in Buenos Aires LONDON (Reuters) – Asset manager Ninety One said on Wednesday it had ... Read more »

© Provided by Pinkvilla Kareena Kapoor Khan and Saif Ali Khan’s younger son Jehangir Ali Khan has been the talk of the town since he started stepping out with his ... Read more »

Israeli officials are set to approve a plan for 3,144 homes to be built for settlers in the West Bank. ABIR SULTAN/EPA-EFE/Shutterstock The State Department said Tuesday it is “deeply ... Read more »

A British soldier who died during the First World War will finally be laid to rest in Belgium – more than 100 years after his death. © Associated Press Lance ... Read more »

Sussanne Khan is a diva and there is no denying this fact. She has been making it to the headlines in recent times for her rumoured affair with Arslan Goni. ... Read more »

Timothee Chalamet's Dune to get a sequel, will be released only in theatres in 2023

A failure to take action on methane emissions by the world’s biggest meat and dairy companies is fuelling the climate crisis, say campaigners who have compiled the first ranking of ... Read more »

Have scientists found the first planet outside our galaxy? It's complicated

EU climate chief: 'We need to be more ambitious'

Local publisher calls for submission of horror stories ahead of Halloween